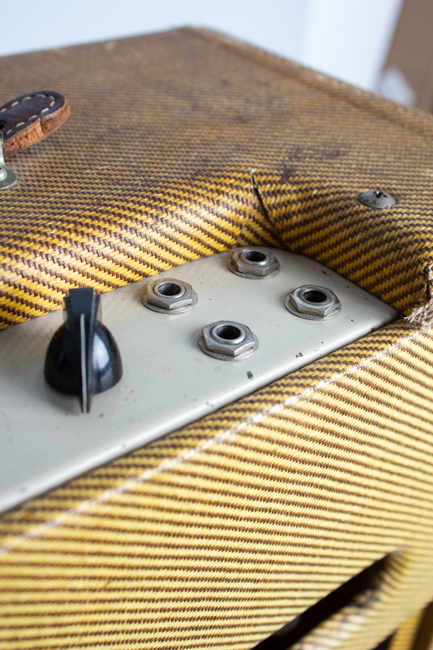 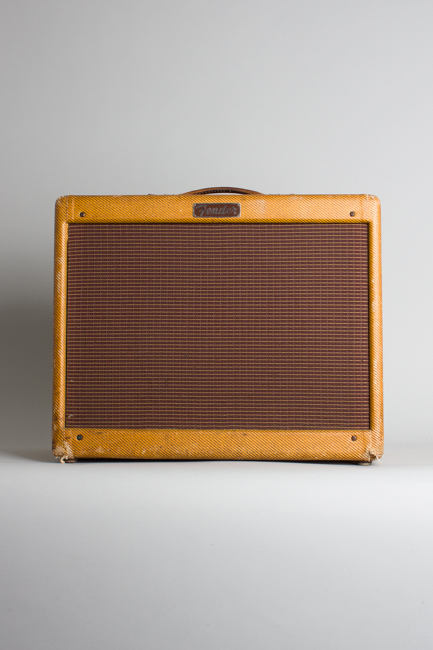 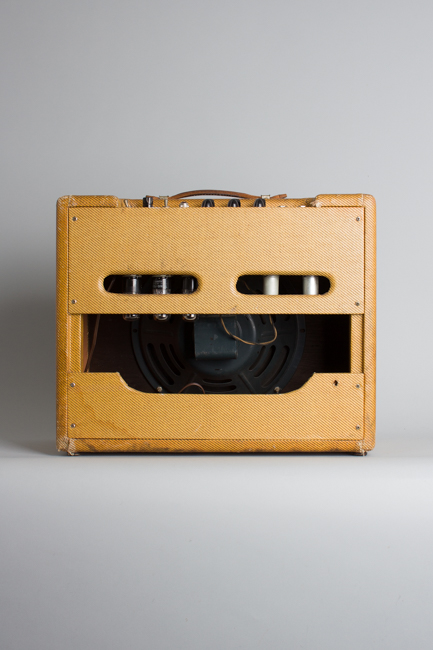 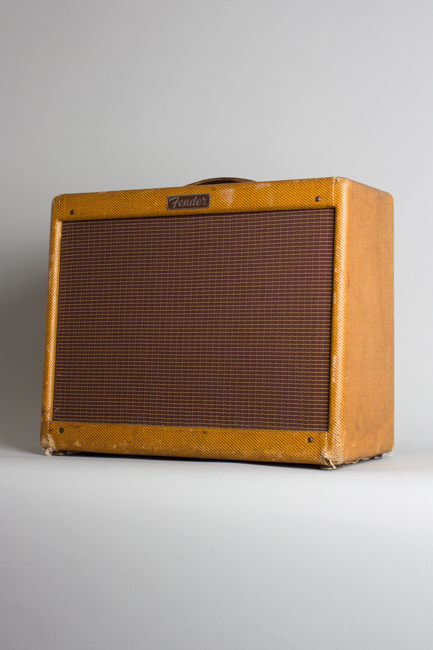 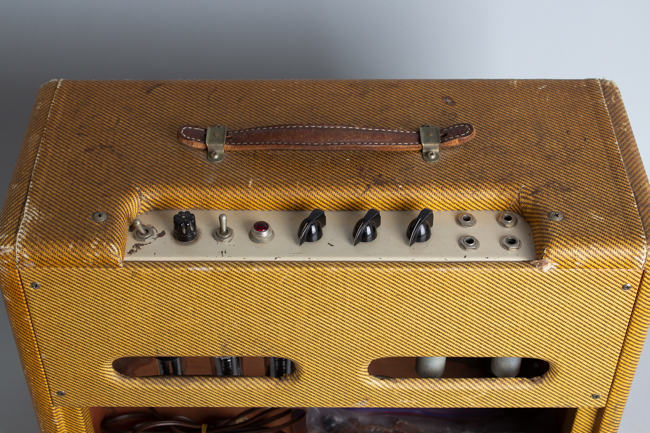 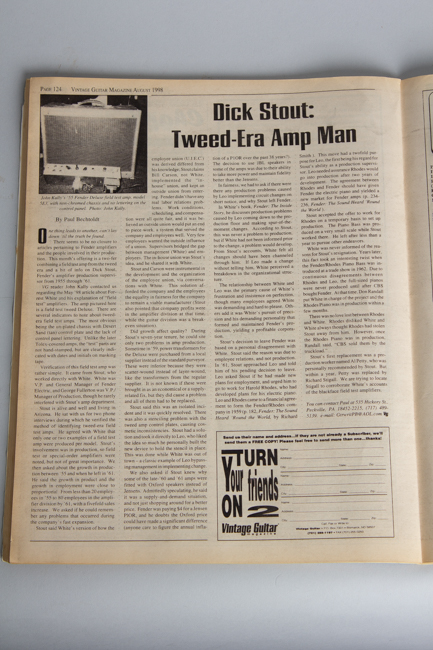 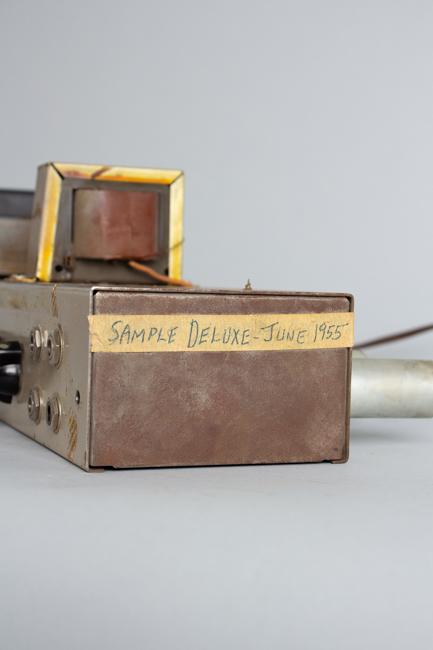 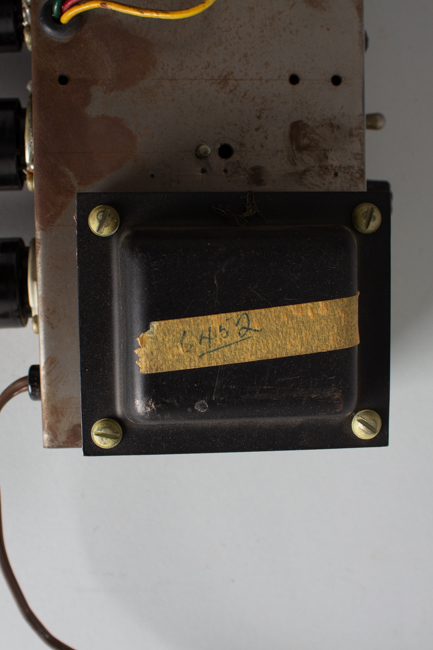 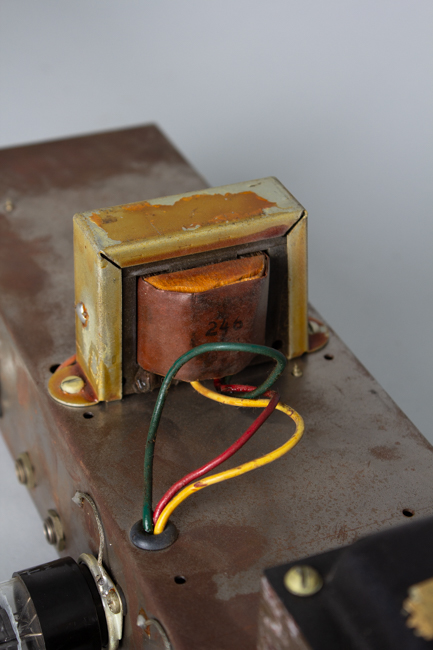 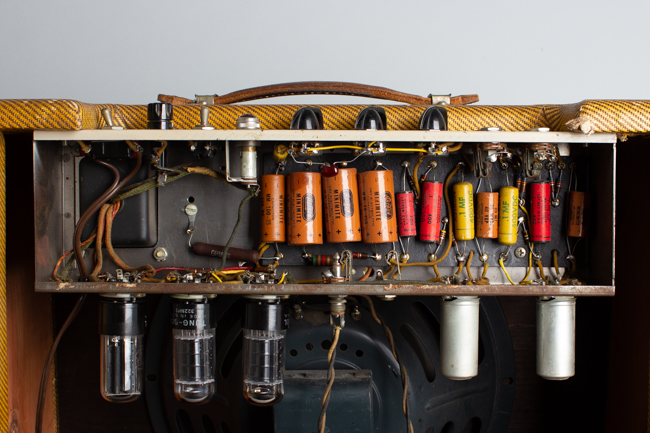 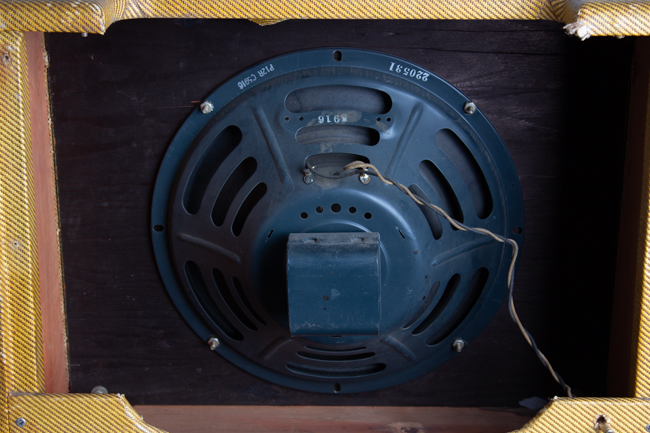 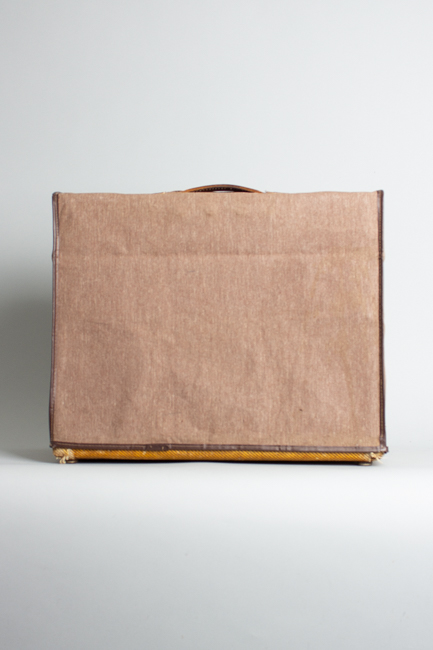 Here we have a fascinating one-of-a-kind piece of Fender history: a "Field Test" Fender 5E3 Tweed Deluxe that once belonged to Dick Stout, Fender's amplifier production supervisor from 1955 through '61. This very amplifier was featured in the August '98 VINTAGE GUITAR Magazine article entitled "Dick Stout: Tweed-Era Amp Man" by Paul Bechtoldt. This rare interview with Mr. Stout particularly examined the nature and circumstances of the field-test amplifiers during his years at Fender. Mr. Stout related that when he left Fender in '61, this test amp was given to him as a parting gift by Leo Fender himself.

The field-test amplifiers were not *exactly* prototypes according to Forrest White, the V.P. and General Manager of Fender who actually ran the factory. White was also interviewed for an article that appeared in VINTAGE GUITAR in May of the same year. White explains that no prototype ever left the Fender factory, not even Leo Fender's lab, but that they would occasionally build "field test versions" of new or updated products intended to elicit feedback from players that would inform production changes and further improvements. Stout notes in the interview that "only one or two examples of a field test amp were produced per model", making this amplifier the only known to exist of its kind.

There are several specific indicators to note indicating a tweed-era field test amp; the most striking is the un-plated chassis with a Desert Sand (tan) control plate lacking any control panel lettering. Unlike later-era field-test amplifiers, the test part numbers on this Deluxe were not hand-stamped but written by hand on pieces masking tape. As such, "6452" is hand written on masking tape applied to this unit's original Triad power transformer. Another clear indicator is a piece of masking tape on the outer right side of the chassis, reading "Sample Deluxe June 1955" written either by Mr. Stout himself or by Lily, who wired the amp and was a noted Fender assembler of the day (and our favorite!)

The 5E3 Deluxe is considered to be the most desirable version of this long-running model and undeniably one of the finest small combo amps ever designed. This model started production mid-'55; this amp is certainly one of the very first made, spearheading the launch of the latest circuit revision replacing the relatively short-lived 5D3 predecessor. Alongside the new "Narrow Panel" cosmetic appearance to the cabinet, the amplifier circuitry also evolved from the 5D3 version. The new circuit runs at higher voltages than earlier models giving it more headroom and total gain. It uses the same 12AY7 and 12AX7 preamp tubes but with a cathodyne phase inverter, which is comparatively cleaner than the phase inverters used in previous Deluxe models, offering more balanced gain staging between the power and preamp tubes and creating its own unique snarl when turned up.

The control layout was changed from earlier Deluxe models. It now featured two channels, normal and bright, both having a high and low input, independent volume control and a single shared tone control. Typical of the Deluxe model, the amp sports a dual-6V6 power section putting out around 15 watts into a Jensen 12" speaker.

Height is 16 in. (40.6 cm.), 20 in. (50.8 cm.) width, and 9 1/2 in. (24.1 cm.) in depth at deepest point.
This one-of-a-kind amp remains in very good shape, considering its 65+ year lifespan. Externally, the cabinet shows some typical wear and scuffing, most notably around the edges and seams of the rather frail, thinly lacquered tweed-covering. A handful of cigarette and/or soldering iron burn-marks adorn the top. While in Fender and Mr. Stouts possession, the amp lived without either of its rear panels. As a result, they are somewhat lighter in appearance than the rest of the tweed covering. The lower of the two panels has a small hole drilled through on the lower right hand side, presumably intended to house an extension cabinet jack at one point.

Most strikingly, the faceplate is blank with no stenciled lettering for the inputs or the controls, but "Brite" and "Nor" can be seen faintly written in by hand underneath their respective channel volume controls. There is a minor amount of chipping and scratches to the "Desert Sand" coating, but the plate remains mostly unbattered and free of corrosion. The original handle sadly met the end of its days long ago, and has been replaced with a high quality repro, likely not recently, as even this handle is well worn! The original handle is included in three pieces. Given it's role at Fender, this Deluxe never had its own dust cover, but included is an era-accurate light brown slip-cover made by Victoria.

Electrically, one might expect interesting deviations in this particular sample from later 5E3 production pieces but this amp is a 5E3 through-and-through; apparently the Fender team got it right from the start! All wiring and components in this amp appear to be original. There's an interesting mixture of components associated with different eras of the tweed evolution, most notably the mix of red "firecracker" and yellow Astron coupling caps. Some of the leads are the polymer-coated style wire, typically used later in the 60s, as opposed to the cloth-covered wire used around this time. All could be related to alterations and updates that led to the final circuit or simply assorted spare parts used for the field-test builds initially -- the latter being not unthinkable for Fender, considering Leo's infamous frugality.

The speaker is the original Jensen P12R, marked 220-531, dating it to the 31st week of 1955. It is without a bell cover and retains its original cone. Both the power and output transformers are the original Triads and are marked 6452 and 246, respectively. The pots are all date to the 43rd week of 1954 reading 304-443. The amp sports a full set of Tung-Sol tubes, except for the first 12AY7 preamp tube, which is made by GE. The amp also still retains its original 2 prong cable.

DISCLAIMER: While we normally service all amplifiers for use, this nearly 67 year old one-of-a-kind amp is original and untouched since being in Mr. Stout's possession, so we have elected in the interest of history to leave it that way. As such it is offered in AS-IS condition, not because of any damage or perceived flaw but due to its uniqueness, age and all-original state. The amplifier HAS been tested and it is currently fully functional; it powers up and sounds great. However, if it is to be used more than casually and without any risk of damaging the amplifier, we would recommend it be professionally serviced to the level desired and we would be happy to do so upon sale. The electrolytic capacitors in the amplifier have aged many decades past their expiration dates to the point where we cannot guarantee their continued functionality and their failure could potentially cause damage to irreplaceable components. However, as it stands, this is an unaltered historic piece, an irreplaceable part of Fender history. Understanding that some would prefer to keep it unaltered, we leave it to the next owner to decide. Overall Very Good + Condition.
×