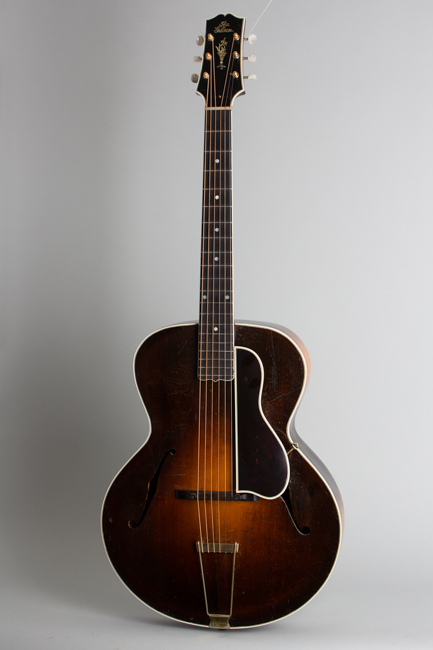 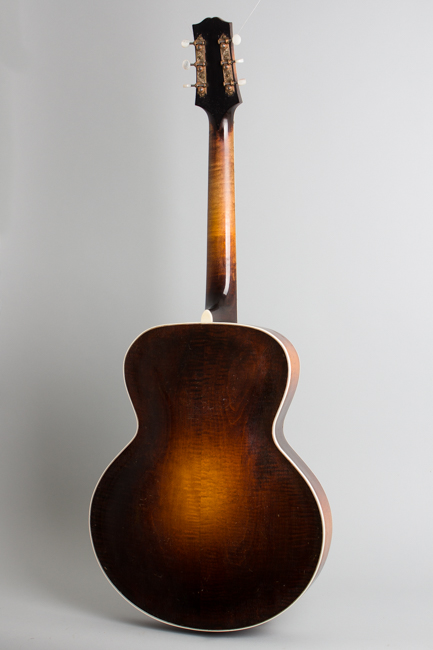 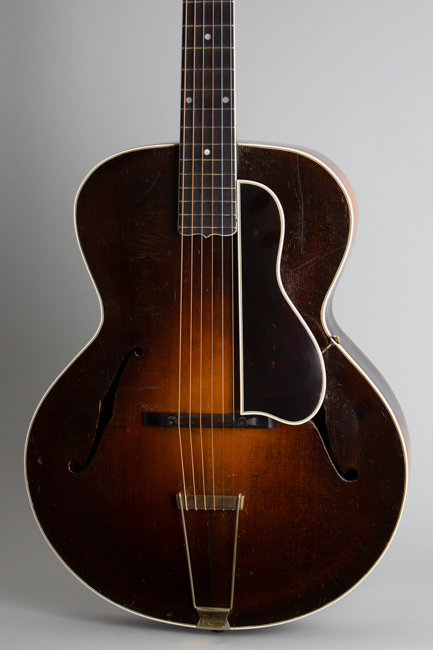 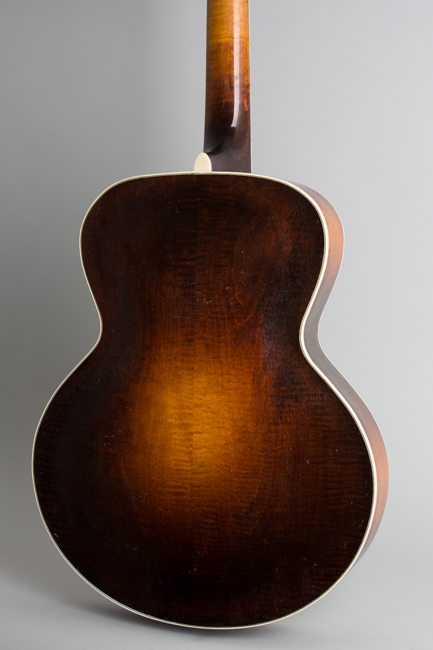 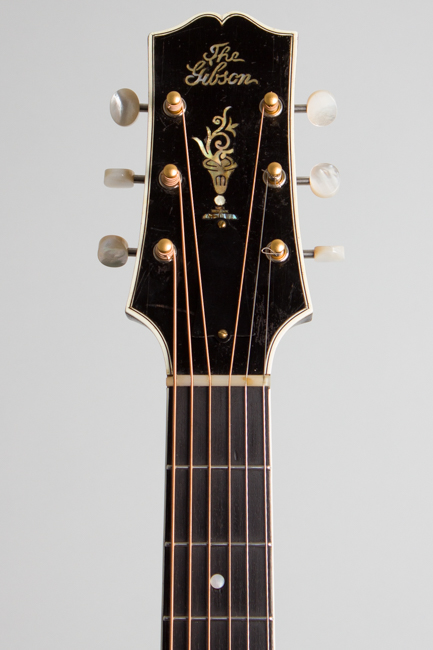 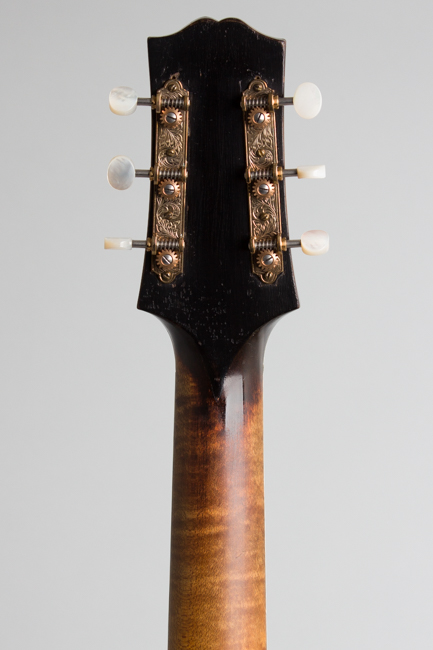 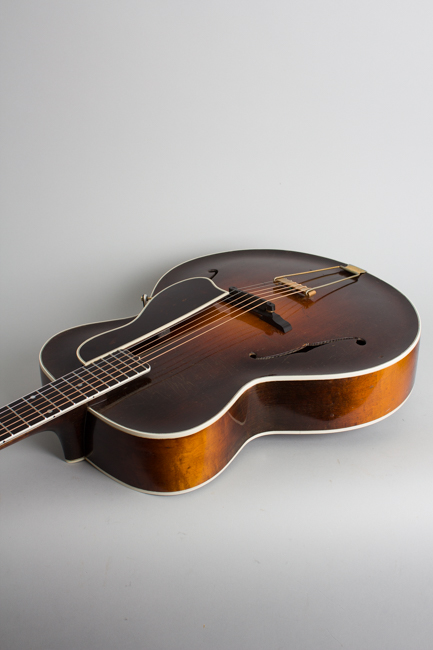 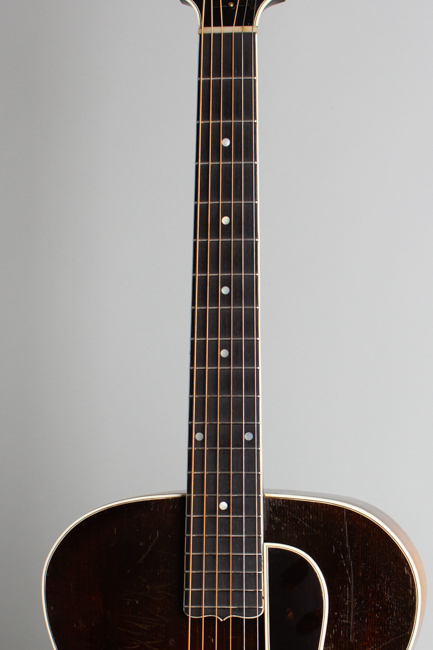 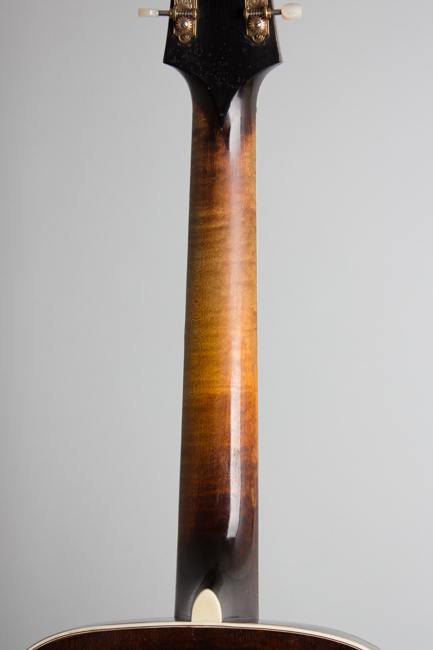 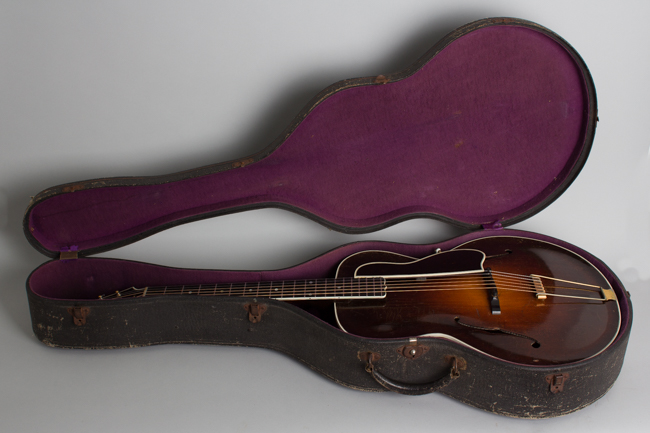 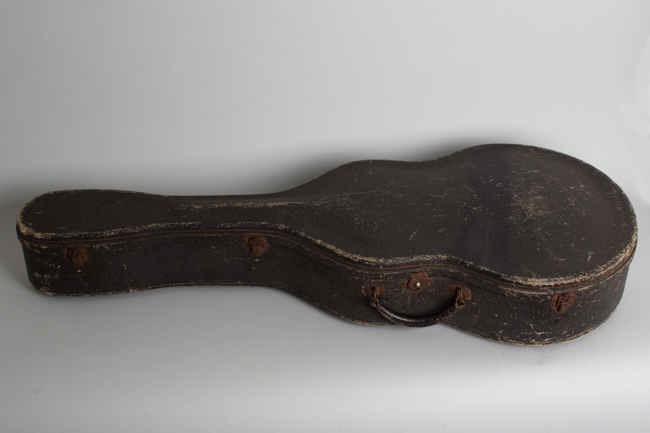 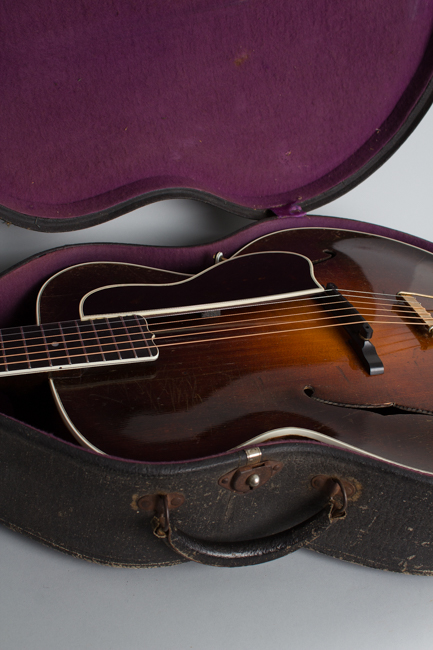 This 1931 L-5 is a great playing example of the pre-eminent professional guitar of its era -- the original f-hole archtop guitar -- an extremely fine-sounding instrument by any standard. Debuting in 1923-4, the L-5 was the first modern archtop, combing the violin style f-holes, a 14th fret neck joint and the elevated fingerboard for the first time. At the time this one in was built in early/mid 1931 it was the top of Gibson's line and had no serious competition, universally considered the finest orchestra guitar made. Other makers were just beginning to explore this avenue, and the L-5 was the inspiration for all and a template for most other f-hole guitars that followed including an entire line of Epiphones launched this same year.

That said, these 1920s and early 1930s L-5s are fairly rare guitars today. Retailing at $275.00 (plus case!), this was an extremely expensive guitar; the top-of-the-line Martin pearl-trimmed Style 0M-45 retailed at $100.00 less). In 1931-2 at the height of the Depression only top professional users with steady salaries could afford the indulgence of such an instrument.

This guitar shows typical features for a 1927-31 L-5; the transition between variants is inexact and the serial numbers are not in strict order with the progression of features. The original pearl dot inlayed, triple white-black-white edge bound, 20 fret fingerboard ends in a curled point. The 1-piece curly maple neck has a comfortable and surprisingly shallow "C" profile, quite unlike the much deeper necks of a year or so earlier. This combination of features, a one-piece neck with a more modern feeling neck are combined on only a few L-5's of this exact period. The frets are modern replacements, only just slightly larger than the original specification, recently dressed for optimum playability. The original mother of pearl nut is intact.

The pearl inlaid flowerpot in the triple-bound headstock and straight across "The Gibson" logo are the hallmarks of the 1931 L-5; the back of the headstock has an ebony overlay. The engraved, gold plated and mother-of-pearl buttoned tuners are a custom made set by the modern Waverly company to the correct specifications of the originals. At some point later Klusons were fitted to the guitar leaving small telltale marks on the back of the headstock.

The body on this guitar is, like many early L-5s, just a hair over 16 inches wide, triple-bound back and front. The carved spruce top and subtly flamed maple back and sides carry a beautifully blended dark Cremona Brown sunburst finish. The pick guard and mounting hardware are correct pattern modern replacements. The tailpiece has the older "string over" cross bar which is a very accurate modern reproduction made by Frank Ford, signed in stamped letter on the underside. The tailpiece bracket and ebony bridge base (stamped "PAT'D JAN 18-21.") are original to the guitar, the ebony bridge top is a modern reproduction.

The braces are the original solid carved design, not the "kerfed" bracing (partially cut through to make it quicker and easier to fit) that began to appear on L-5s around this time. This is generally held to be a sonic plus -- certainly this guitar has a powerful and very versatile sound typical of the best early L-5s; simultaneously warm and incisive with plenty of depth. It plays extremely well and is exceptionally responsive for an archtop guitar...it even sounds lovely fingerstyle! This is a well-played but wonderful example of one of our all-time favorite instruments, both historically important and a true delight to play.

Most early 16" L-5s were used extensively for many years, some owners continuing to prefer them to any later guitars. They are still often seen in the hands of recording studio players well into the 1960s. As working guitars, these instruments have often been heavily modified, refitted, or refinished. This one is has a some general wear and restored parts but both structurally and cosmetically is better preserved than most, retaining all of its original character.

This L-5 shows a decent amount of cosmetic wear overall, but overall remains both cleaner and more original than many. It is structurally very well-preserved and in excellent playing condition. Visually the instrument is still very attractive with a subtle patina not unlike the old violins it was meant to evoke.

The original thin lacquer finish shows some general wear throughout, with checking, scratches, dings and rubbed away spots in numerous areas. The top shows a noticeable case bite in between the f-hole and the binding on the bass side and a long scratch just below the pickguard. Under the crossbar of the tailpiece it is dinged from decades of errant string ends, and there is a long scratch by the forward edge of the pickguard. The only large area of finish worn away is on the back of the neck, which is down to the original clear undercoat for much of its length.

There are two very small filled screw holes in the top, one just beyond the fingerboard extension next to the bass "E" string, the other under the pickguard next to the corresponding treble "E" string. These are likely the result of a DeArmond style pickup having been mounted in the neck position at some point in the past. The original label has fallen out, but the serial number was hand-penciled underneath it and is still clearly visible. The original factory order number was poorly stamped and has faded mostly away but is visible as "98xx".

The guitar shows only some inconspicuous repair work, unlike many L-5's of this vintage that have been heavily rebuilt. There is one neatly repaired top crack under the tailpiece on the bass side of the center seam running from the tailblock to the bridge. As noted the bridge top, tailpiece crossbar, pickguard and tuners are reproductions. As noted it has been refretted, possibly more than once and the current wire is smaller than most modern refrets and has virtually no wear.

While bearing some scars from a long active life this L-5 remains an exceptional player's tool with another century of music in it, at least. It plays beautifully and the sound is truly sublime, one of the most delightful arch top guitars it has been our pleasure to handle. The original case is still with it, somewhat worn but fully functional. Overall Excellent - Condition.
×