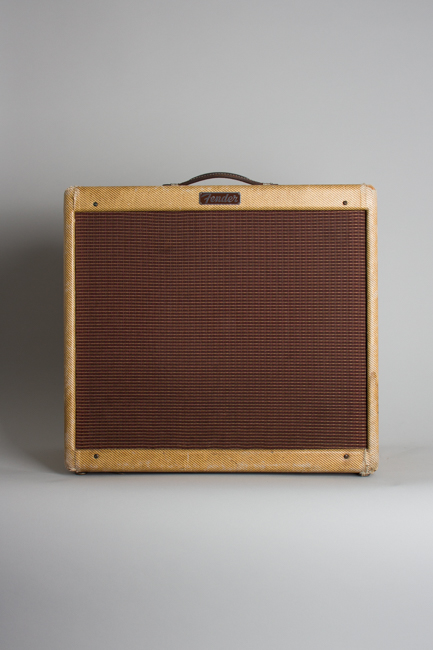 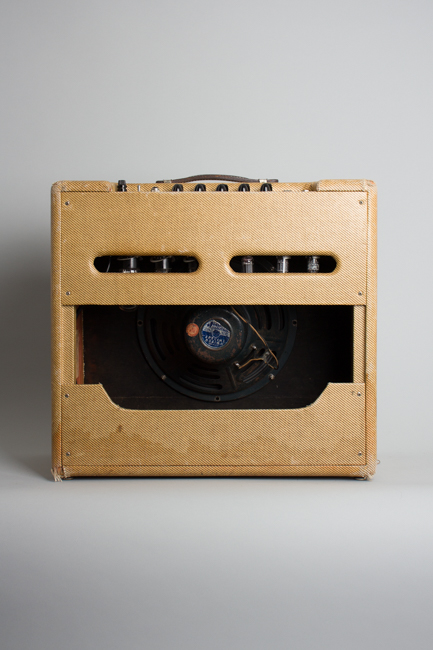 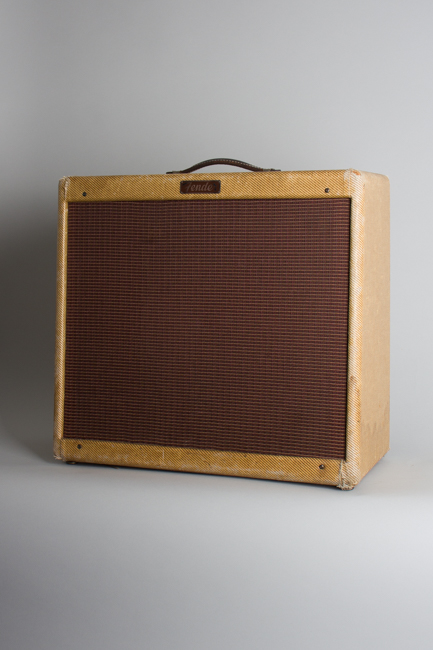 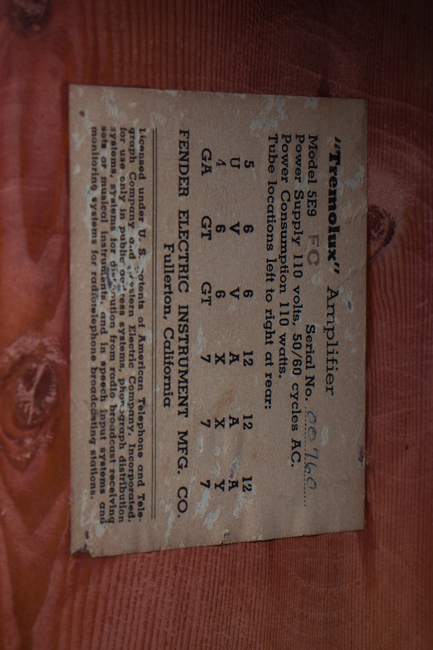 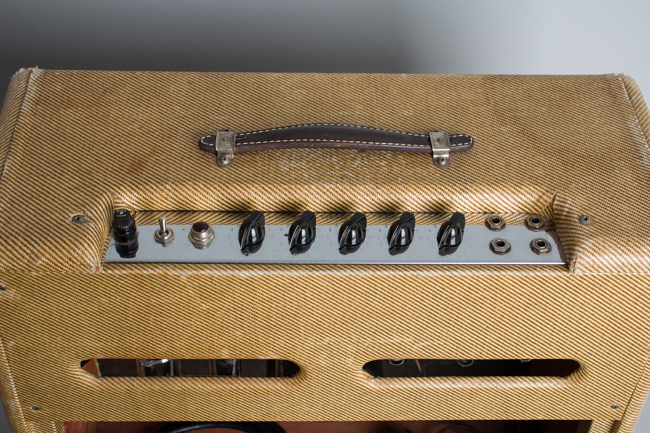 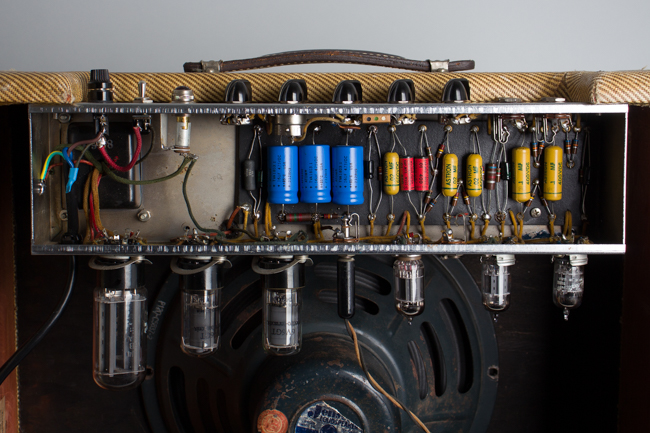 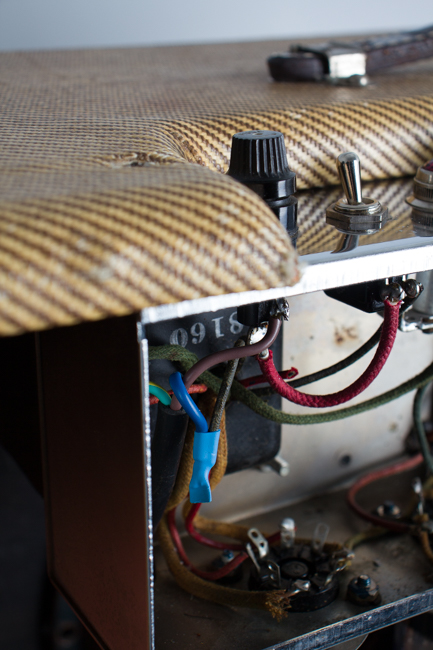 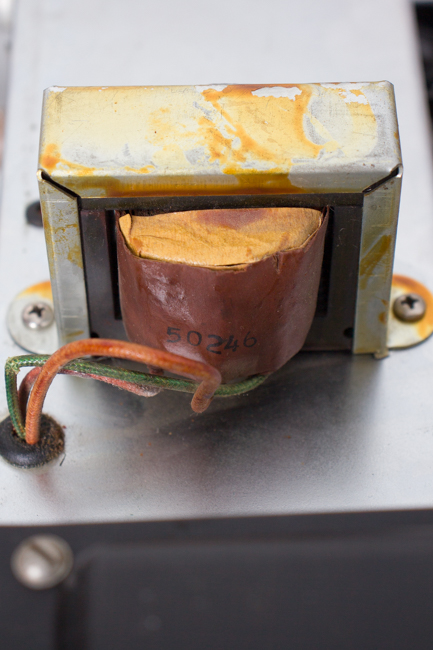 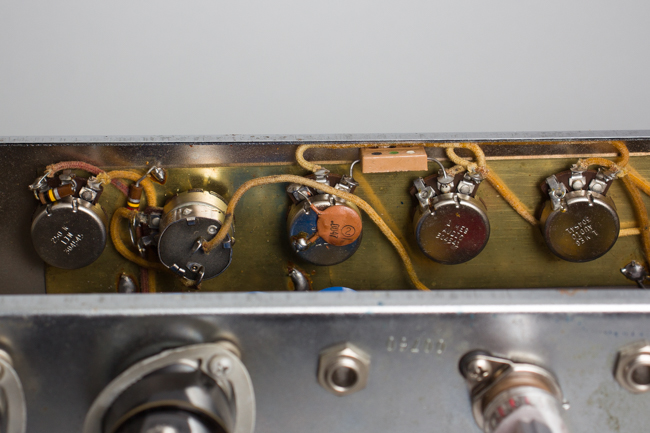 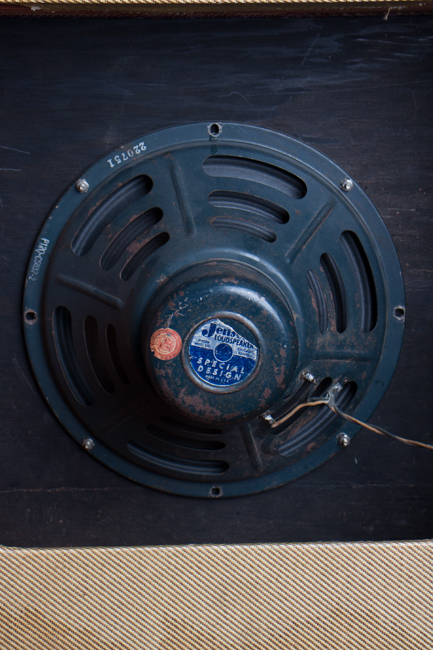 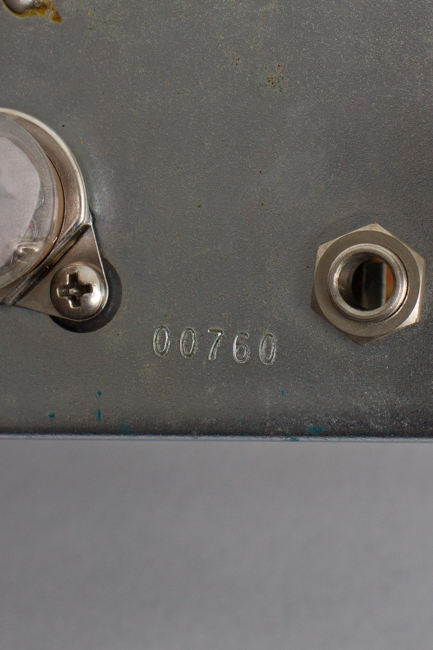 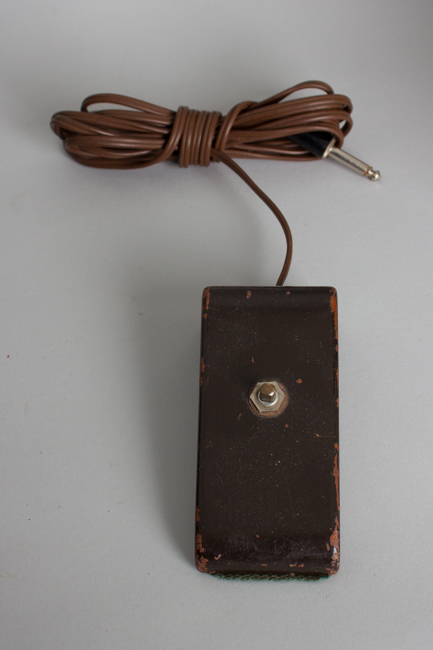 This early 1956 example of the narrow-panel tweed Tremolux is one of Fender's classic period amps, among the rarest and most sought-after bigger-box Tweeds today. Originally introduced in 1955 alongside its smaller cousin the Vibrolux, the two amps pioneered the company's first built-in tremolo effect. The initial 5E9 circuit is essentially a 5E3 Deluxe with the added on-board effect and a taller cabinet.

Just a bit louder than the standard Deluxe, The Tremolux is the perfect amp for those gigs when the smaller tweeds just don't quite have the power to cut it. The larger box also gives a bit more breadth, letting the bass-response develop more, avoiding the boomy flub sometimes associated with the smaller Deluxe cabinets. The tremolo is lush and deep and has an impressively wide range due to the trem circuit modulating the phase inverter bias, effectively making the effect consistent regardless of the volume setting.

This amp has a tube chart code "FC" dating to March 1956. The tweed cabinet is in fairly good shape with only minimal fraying and wear, mostly along the edges and corners. The faceplate is comparatively clean, save for what appears to be one of the owners' 17-digit driver's license number scratched in just above the controls. Otherwise there's minimal-to-no scratches or corrosion, though some of the lettering has faded or worn off. The handle appears original or a very old replacement and the amp retains the original wooden footswitch for the tremolo.

Electrically, the amp is nicely original: the speaker is a period-correct Jensen P12Q marked 220-751, dating it to the 51st week of 1957. The baffle appears to have sustained a crack along the lower half at some point that has been neatly repaired and remains structurally solid. The grille cloth looks like it has been replaced but is the correct weave pattern to the vintage original. Both transformers are original to the amp; the power transformer is the original 8160 Triad and the output transformer is the original 50246 Triad (a cousin of the 108 Triad) as well. The V3 tube socket has been replaced and it appears tube-retainers were at one point added. The chassis tape marking indicates this one was wired up by none other than Lily, who was also the queen of the Harvards; we love her work!

It has also been given our typical servicing, which includes replacement of all electrolytic caps, cleaning of all sockets, pots and jacks and biasing to spec, a grounded three-prong power cord, removal of line-to-ground capacitor (aka. death cap) as well as thorough testing. The circuit is original and no alterations have been made other than standard maintenance to ensure reliable operation for many years to come.

This amp sounds truly phenomenal and is one of our favorite tweeds in the shop currently. It looks to have had a colorful life already and will be an outstanding musical companion for another few decades, at least! Overall Excellent - Condition.
×