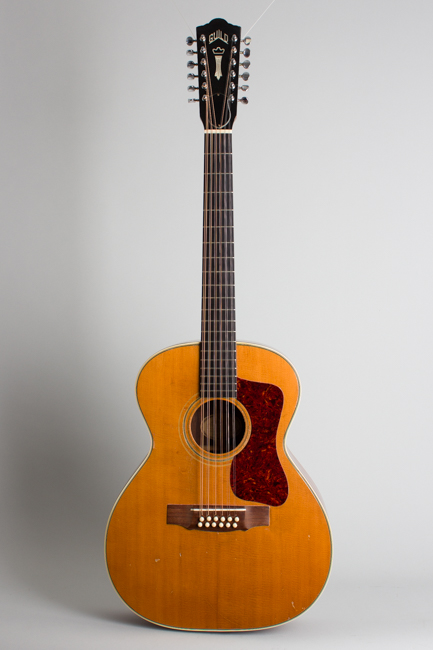 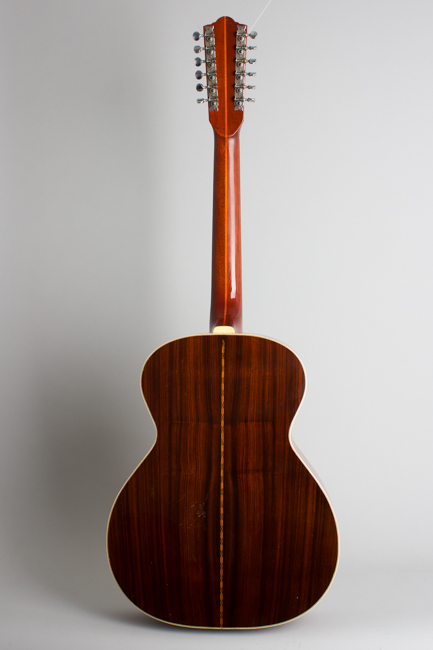 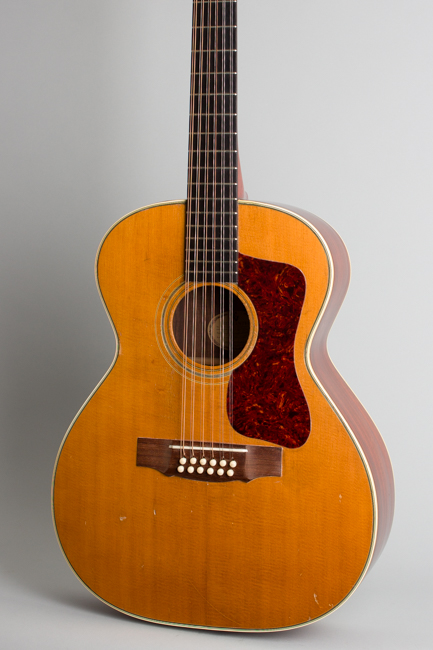 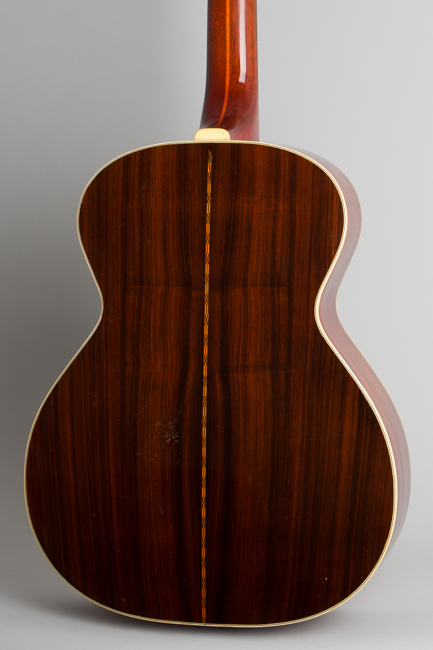 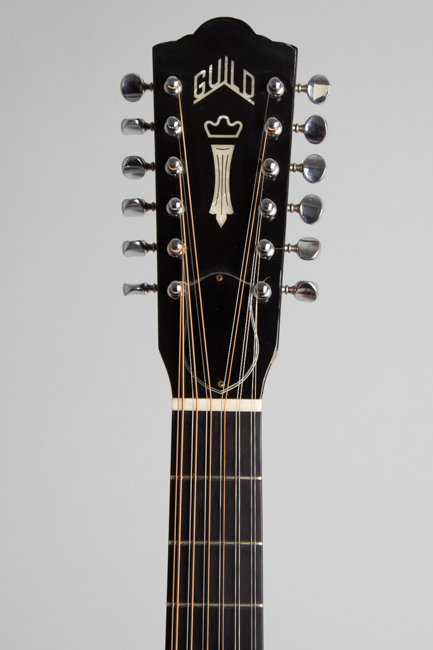 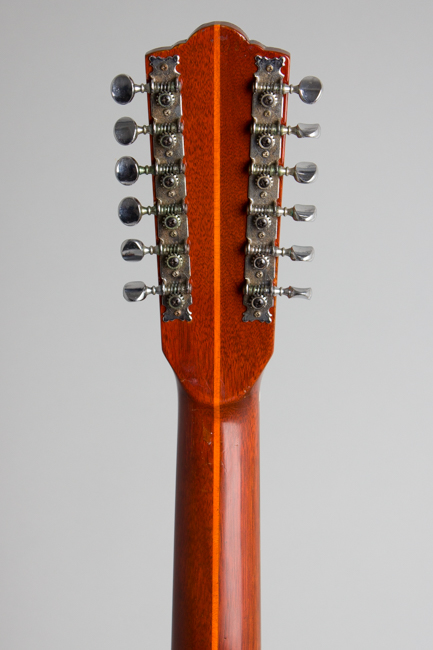 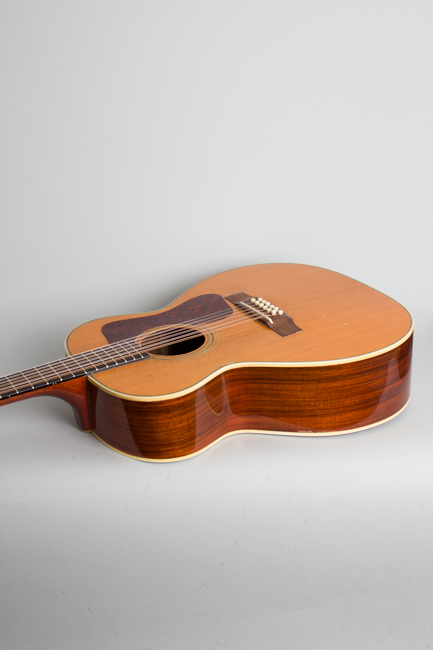 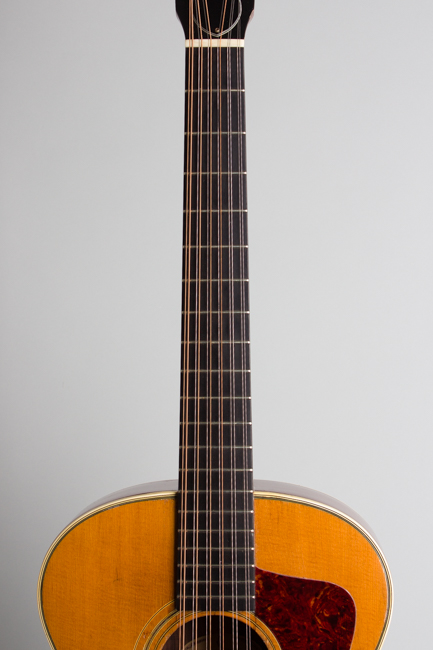 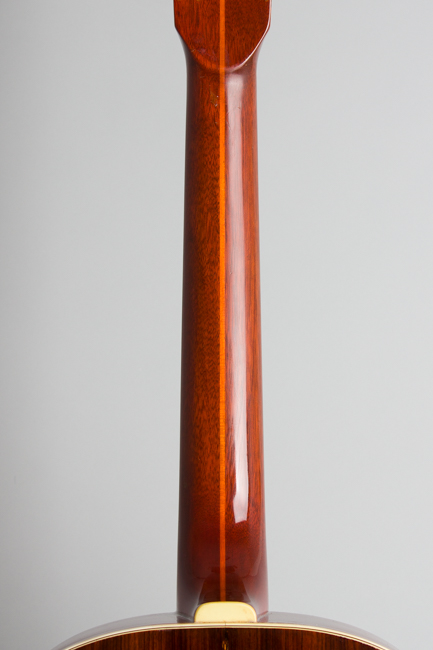 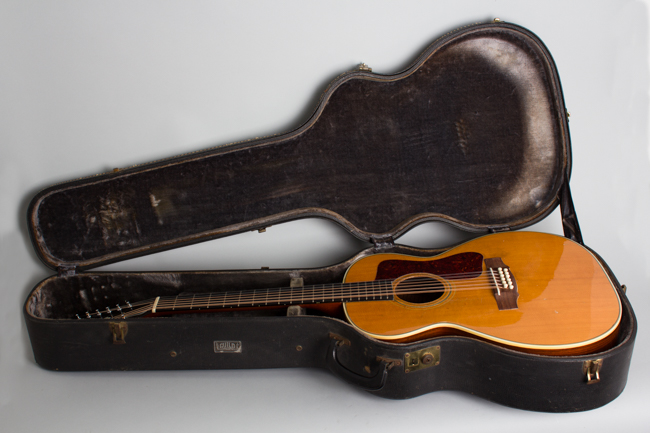 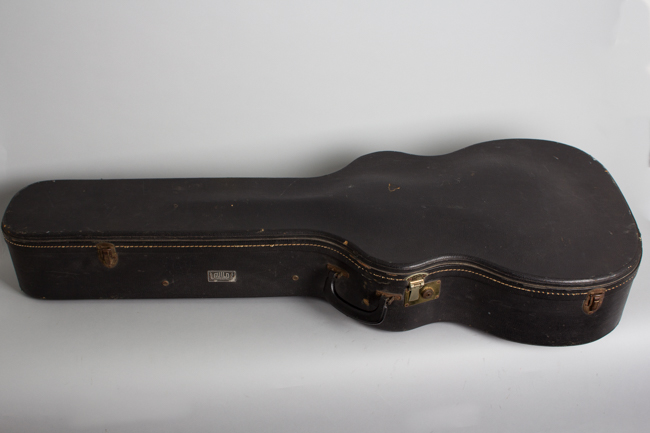 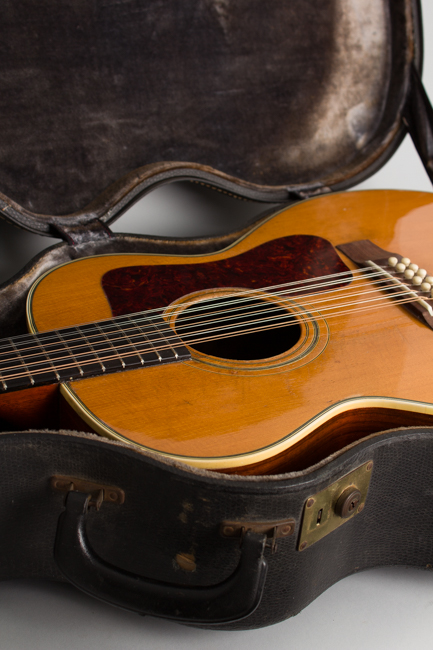 Here's something you don't often see; a Brazilian rosewood Guild 12-string from the 1960s. The mahogany body Guild F-212 is generally considered to be one of the true standout postwar 12-strings, but this upscale sister the F-312 is much rarer and slightly more refined. With the modern restrictions on Brazilian Rosewood this model is unlikely to ever be replicated, and so remains a singular instrument to both 12-string enthusiasts and Guild collectors.

The F-312 is built on the same not-quite 16" wide mahogany body pattern as the F-212, with an X-braced spruce top. The Brazilian on the back has a fantastic deep grain figure Martin's wood pickers would have envied in 1968. The wide mahogany neck has a center maple strip lamination and an unbound ebony fingerboard. Despite being fairly chunky in profile this round-backed design is quite comfortable, built with an unusual double truss rod system that works quite well.

This is a later example of the model, which was introduced in 1964. The first Guild 12's have a flat radius fingerboard (like an old Stella!) but this example from 1968 has a radiused board most players find more comfortable. Another quirk of early Guild 12-strings is the fingerboard has no position markers; it does have small side dots. The top is multi-bound in white/black celluloid, with a large distinctively patterned bridge and a tortoise celluloid pickguard also in the typically unique Guild shape.

The F-212 was a world standard acoustic 12-string when new in the 1960s, one of Guild's signature instruments. The much more expensive F-312 is a comparatively obscure model but more than its equal sonically. All of 41 of these were built in 1968, less than 400 total between 1965 and 1970. This one shows some typical wear and repair but plays excellently with a powerful but still transparent chime, with the extra depth rosewood typically provides.

Overall this is a relatively clean 50+ year old guitar, showing some typical maintenance repairs only fairly minor play wear. The neck has been reset (an exhaustive process on these!) and there is some attendant scarring and touch up visible around the heel. The finish shows some scrapes and dings, but not a lot of actual playwear. There are a few deeper case lid dings in the top and an area of chips and scrapes on the lower back but overall the finish is relatively well preserved.

There are small tightly repaired cracks on either side of the fingerboard extending to the soundhole rim, but no signs of neck block rotation. There are no other cracks anywhere on the instrument, which is often not the case with larger rosewood guitars. There is some very thin clear overspray and touchup to the top, and on the back from around the heel up along the back of the neck. The soundhole rim shows some wear that was finished over then worn through again in a few spots.

The bridge is rosewood; it is possible it was replaced long ago but in 1968 this model was just transitioning from an ebony bridge, and Guild factory specs are notoriously variable. At any rate it is a correct Guild factory piece and has been lowered slightly in the center section, so we are inclined to believe it is original to the guitar. The pickguard is a correct style replacement; as these often shrink badly this is also fairly common by now. The openback Japanese-made tuners are original, if a bit downscale for this higher-end instrument.

While not a perfect example this is still an original, fine playing and sounding instrument. In general Guild 12-strings do not come a whole lot better than this, especially in this very rare Brazilian rosewood mode. It is still housed in a nice OHSC that shows some wear but still fully functional. Overall Excellent - Condition.
×