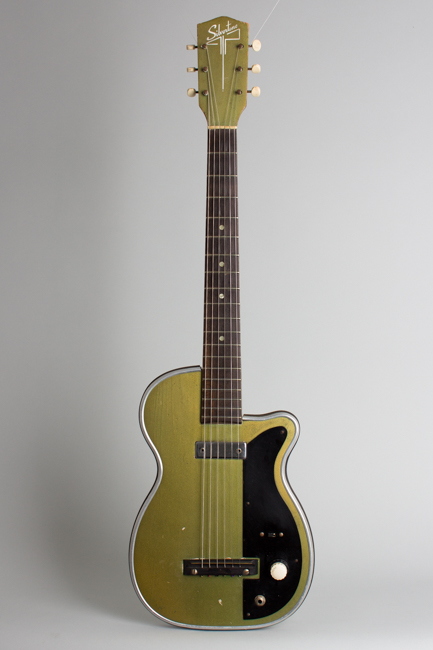 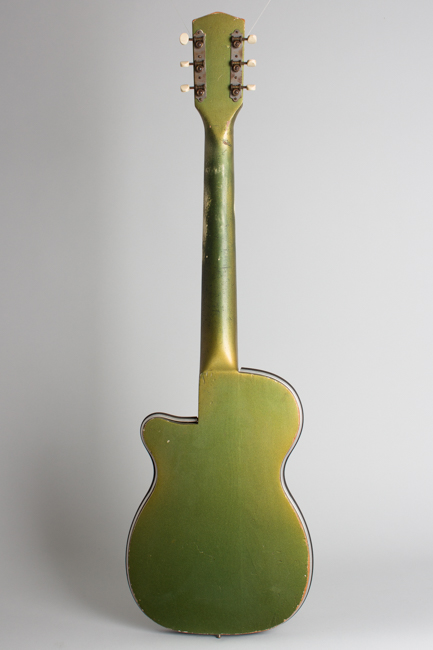 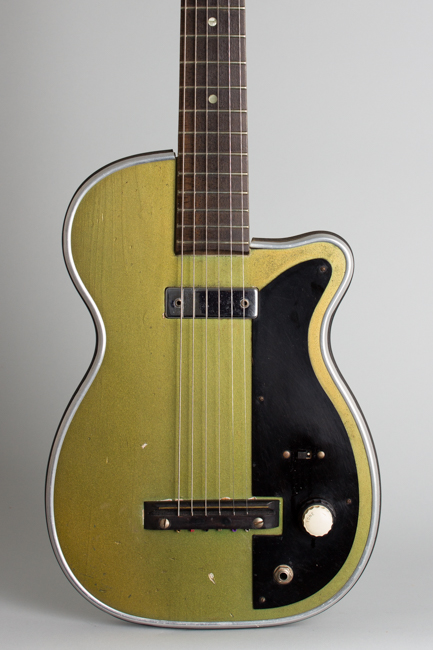 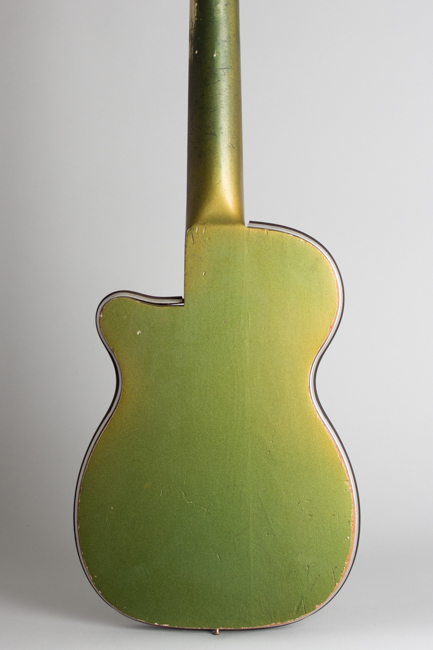 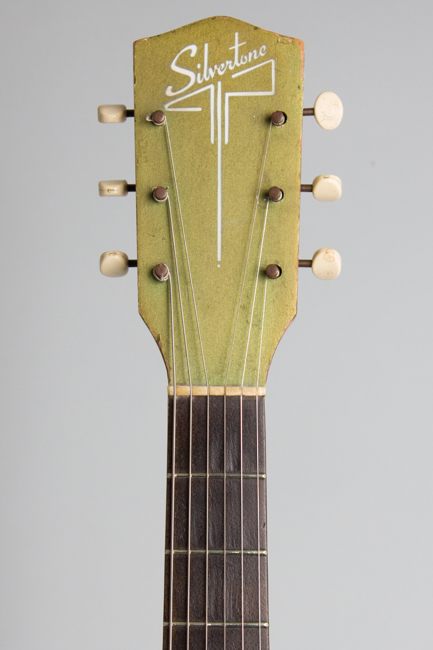 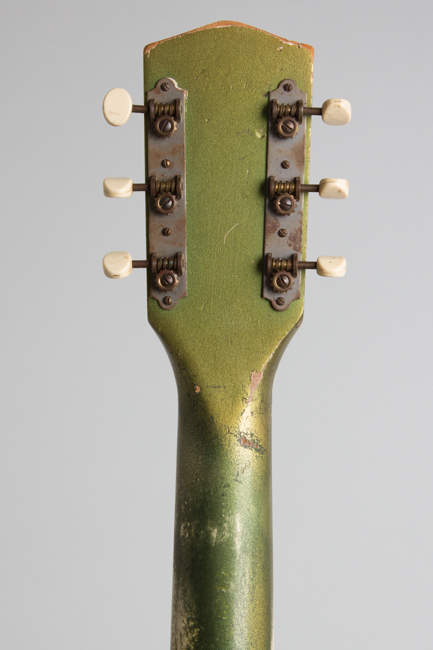 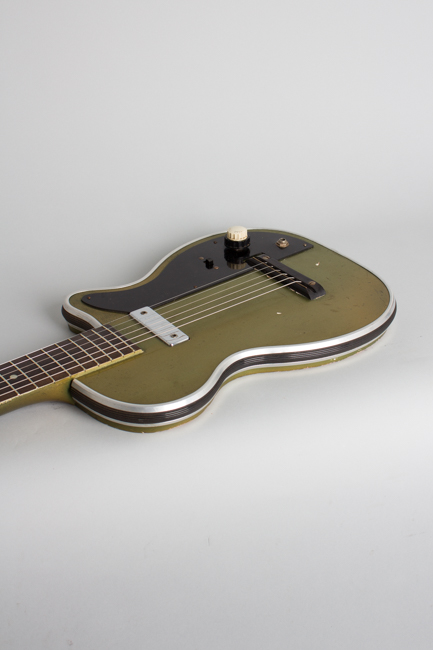 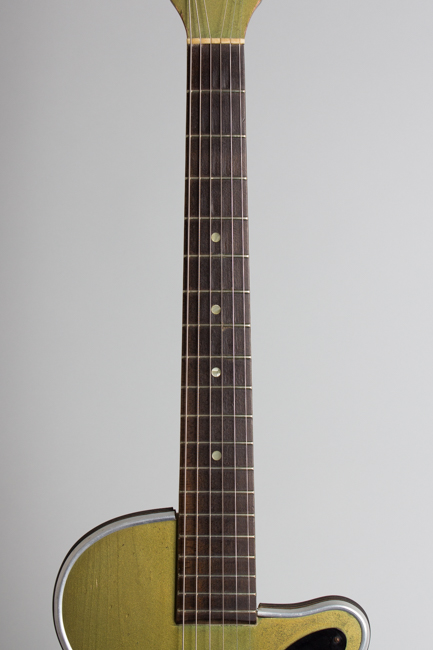 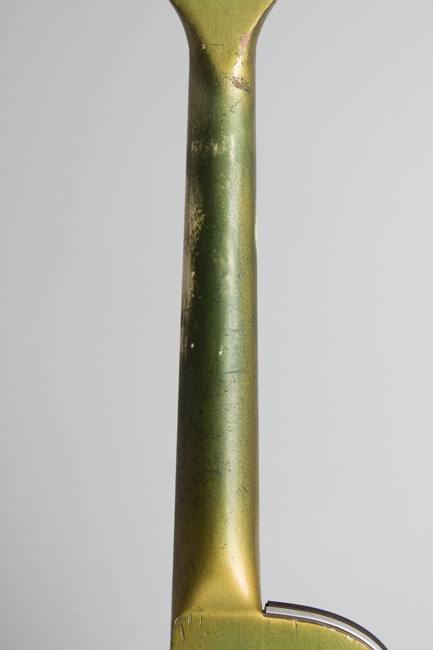 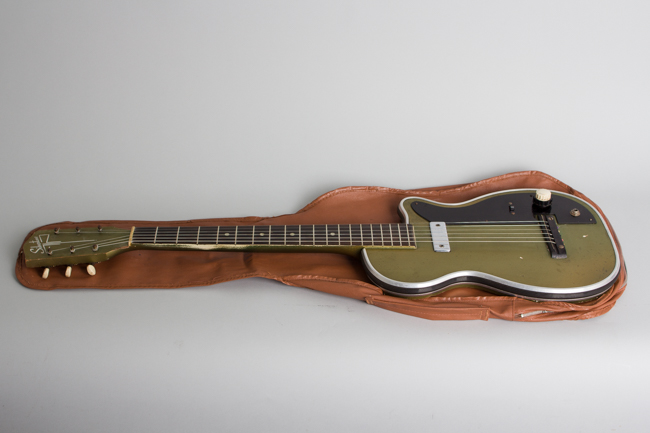 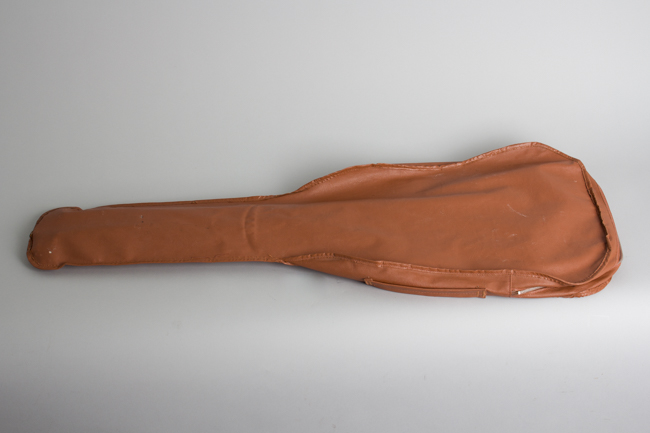 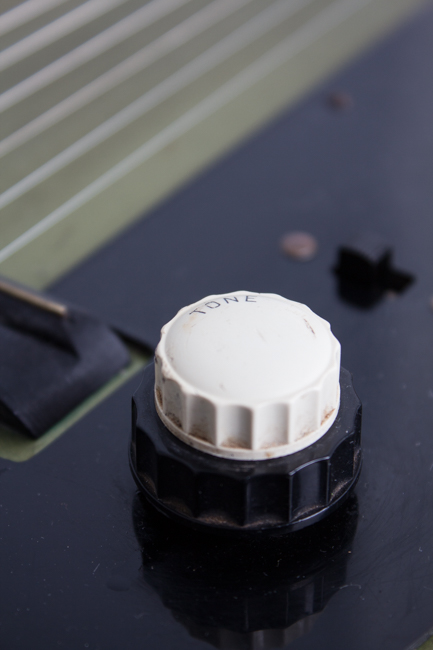 Originally listing priced at the grand sum of $67.50, the Harmony Stratotone Newport H-42/2 is about as small, simple, and handy as an electric guitar gets. The metallic green "Colorama" finish and the metal-and-rubber "Harmometal" body trim make this a fantastic example of 1950s "Populuxe" aesthetics. The through-body neck is very large and chunky, but the body wings are very thin and light, making for a unique feel. You really could use this as a canoe paddle, which we would not recommend, although we've seen some that look like they spent some time upriver!

The pickup is the same DeArmond made unit as the more familiar and slightly more upscale Model H-44 which cost all of $5.00 more in most years. Despite its diminutive size and rather unsubstantial feel, the guitar is quite chunky sounding. The controls are a single tone-bypass switch and a cool stacked tower of concentric tone and volume knobs on a single pot. This example carries a stacked CTS pot dated 349 (the end of 1953), so is an early example probably sold in 1954. The H-42/2 was sold under the Harmony and Silvertone names but in either case is a relatively rare guitar, especially in this decently playable condition. These are always a cool conversation piece guitar and a funky treat for the '50s culture connoisseur.

Overall length is 36 1/4 in. (92.1 cm.), 11 in. (27.9 cm.) wide at lower bout, and 1 3/8 in. (3.5 cm.) in depth, measured at side of rim. Scale length is 25 in. (635 mm.). Width of nut is 1 11/16 in. (43 mm.).
This guitar is in surprisingly good playable condition and remains all original but is a bit scruffy showing some wear overall. The shimmering green lacquer finish has a lot of fade and some typical wear including an assortment of dings, chips, scrapes and dents. The most notable chipping is to the unprotected sharp back body edge and the rear edge of the headstock, which is fairly well worn down. The back of the neck is worn into the white primer, as is typical of these 50s metallic lacquers that simply do not wear well.

All the (fairly minimal) hardware is original; the pickguard has a tight partial crack beneath the jack but is stable. The bridge appears to have had a couple of extra securing screws added and then removed, with the holes in the bridge top plugged. This guitar will never play like a 1950s Les Paul, but this is actually quite a serviceable guitar with what look like original frets that have been polished out but have only light wear. It is housed in the very cheap but intact original gig bag, the relic of more colorful times. Long live "Colorama" and "Harmometal" -- may they be a balm for our modern times! Very Good + Condition.
×