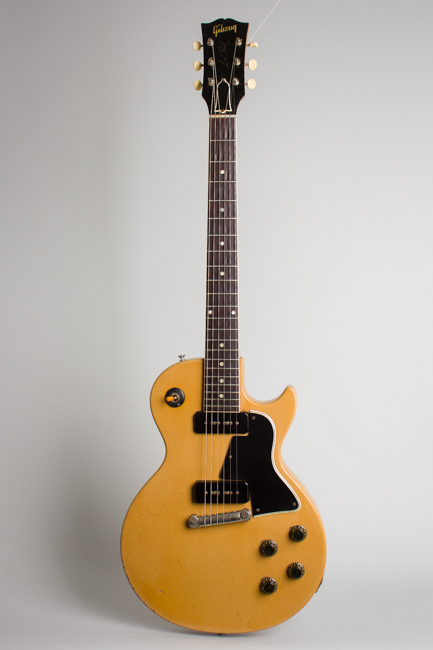 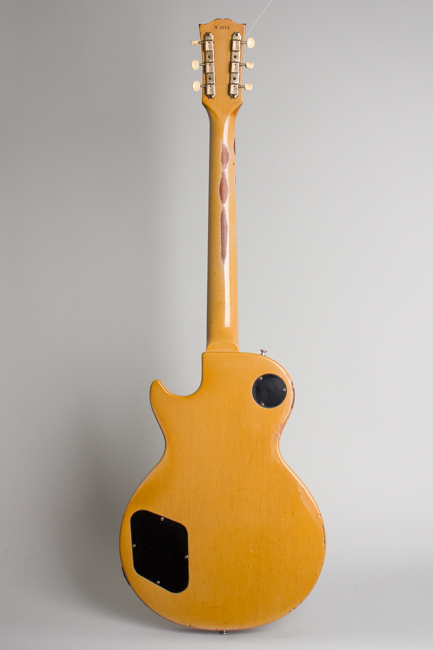 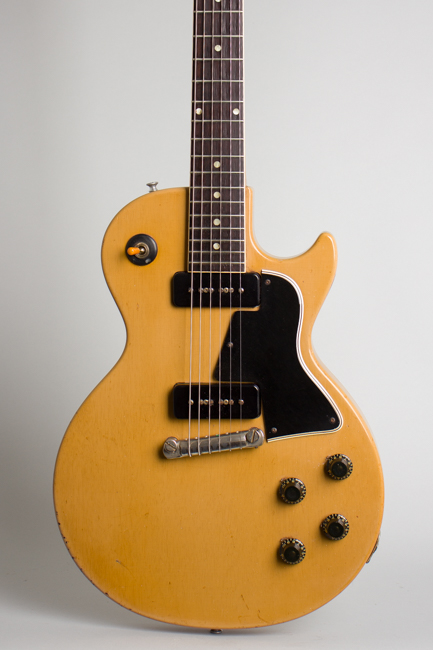 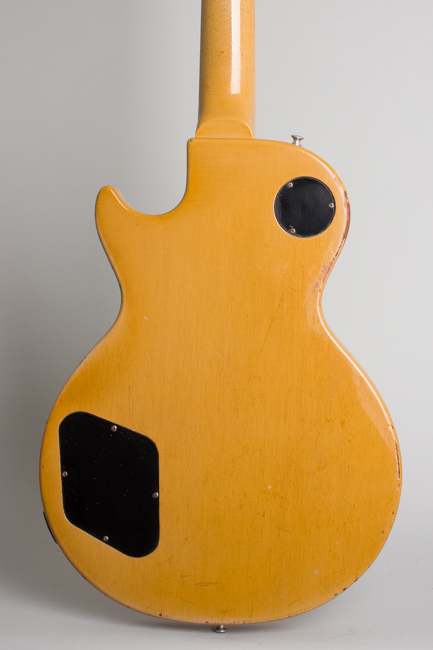 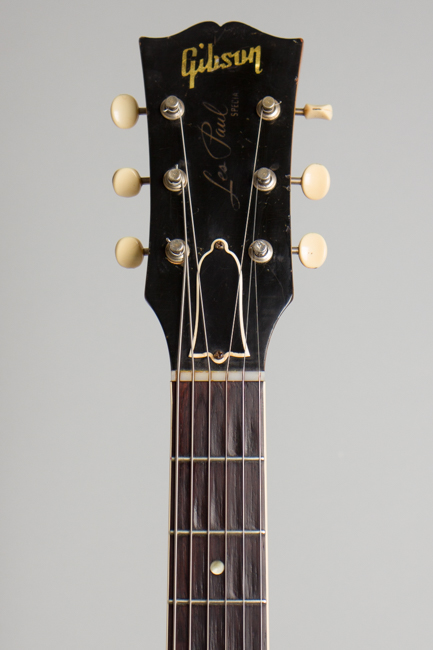 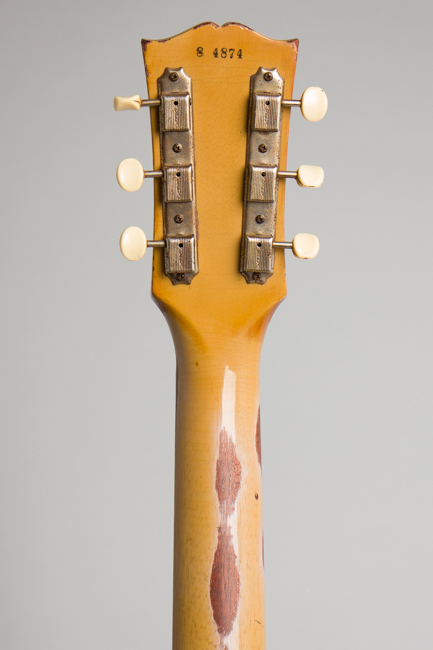 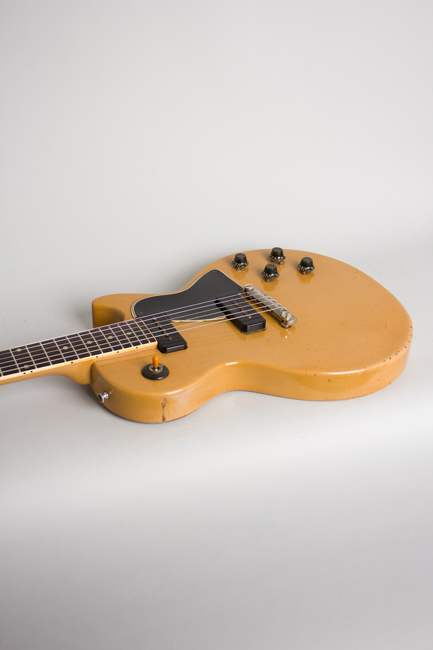 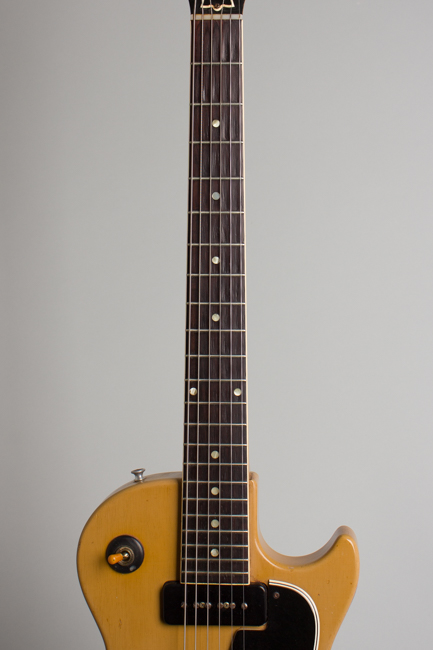 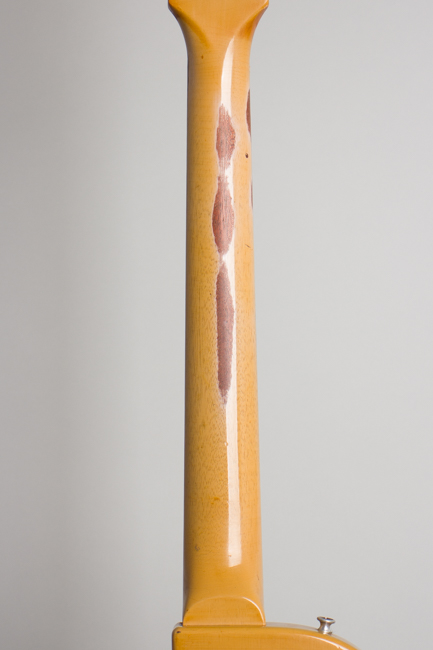 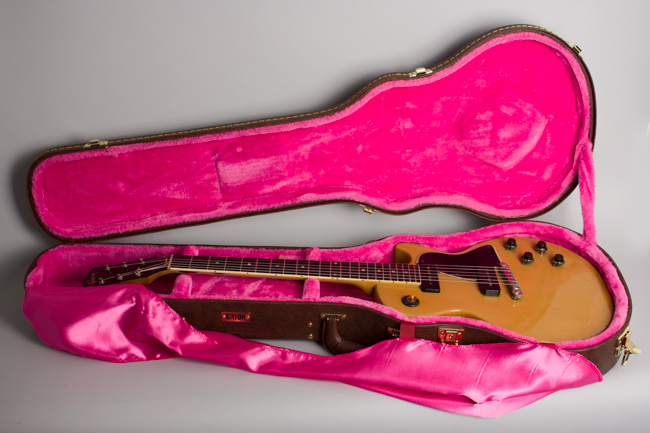 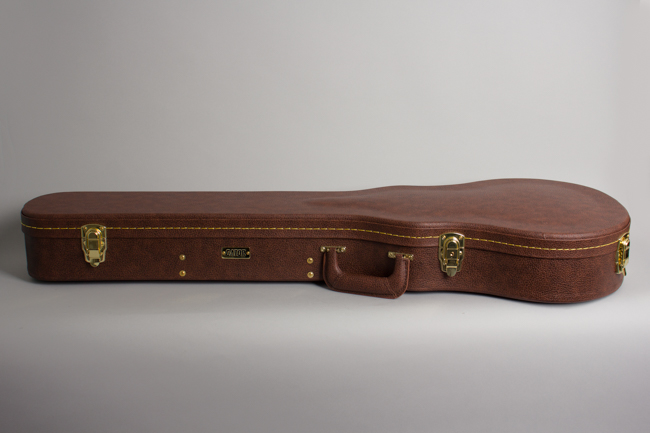 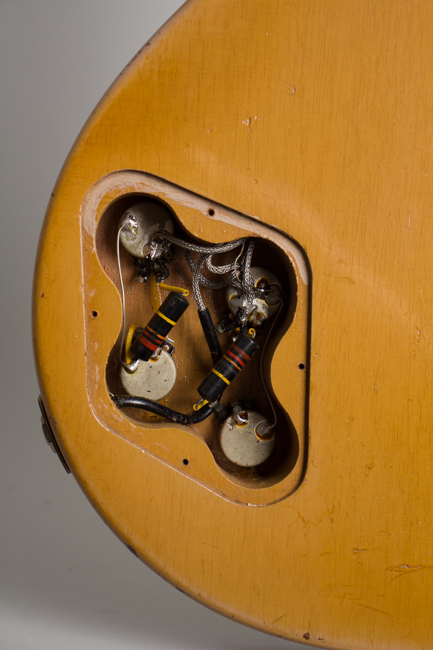 This is a cool example of a 1958 single-cutaway Les Paul Special, worn in with a bit of a "natural relic" vibe but still nicely original nearly 65 years on. 1958 was the last year for this original single-cutaway Les Paul Special design, which was transformed in to a double-cut instrument for the '59 model year. This is a late example of this perennial favorite rocker's guitar made close to the end of the run.

This guitar's features are still typical of the first "Special" variant with a "limed mahogany" finish on the body and neck, two powerful P-90 pickups with black plastic covers, black bonnet knobs, a multi-ply beveled-edge black celluloid pickguard, and the nickel-plated bar bridge/tailpiece assembly. The headstock carries the pearl Gibson logo and silkscreen "Les Paul Special" designation. The original wiring is complete and intact including the much-loved "bumblebee" capacitors. The only oddity is an archtop-style rubber grommet on the switch that is a stock Gibson part; it appears original to the instrument and may have been fitted as a remedy to if the hole was slightly over-routed at the factory.

1958 was a fairly low production year for this model with only 948 were shipped out, some of which were the new version. At any point the LP Special is not nearly as popular as the cheaper single pickup LP Junior, which sold over 2,400 units that year alone. These single cutaway Specials are much more solid in construction than the double-cutaway version; many find the handling and sound more pleasing as well. This is a great all-around guitar, suitable for everything from rampaging Rock'n'Roll to hard blues and even twangy country. As the iconic Gibson solid bodies from the ever-longer-ago 1950s become more venerable, the original single-cutaway Special represents perhaps the greatest value in a "Golden Era" Les Paul.

This guitar has seen some use along the way but remains relatively clean overall, showing some typical play wear and one very minor repair. There must have been a trapeze (probably vibrato) tailpiece mounted at some point that was later removed. This left four small screw holes on the back edge, cleanly filled but visible, touched up lightly but not sprayed over. If it was a Bigsby or similar unit fortunately the top was not marred at all. The finish on the instrument remains all original apart from these small patches on the back rim.

Other than this the TV Yellow finish is decently preserved with some typical light checking overall and some play wear. It has retained the attractive "limed" yellow patina, darker than some earlier examples but not appearing too much "smoked' or faded, except on the back and sides of the headstock. The body face has some small dings and chips but is cleaner than the back which has a number of dings dents and scrapes and a larger area worn through to the wood on the upper edge. The back of the neck has several appreciable wear spots through the finish but only a couple of dings beyond that and is quite comfortable to play.

The hardware is original and in generally excellent condition, with some plating wear to the top of the stop tailpiece. Even the plastic buttons on the Kluson tuners are original. The electronics are all untouched with original solder joints and the coveted "bumblebee" capacitors in fine fettle. The thin black plastic jack plate is amazingly still intact (nearly all of them are broken by now) as is the unusual rubber grommet ring on the selector switch.

The guitar retains the original small frets which have been crowned down somewhat showing only very light wear since. There is some divoting to the fingerboard but nothing that affects playability. Despite the one ill-considered moment that left discreet scars on its rim this is a superbly attractive, great sounding Les Paul looking super and just worn enough to still gig; ready to go for the next 60 years. It is housed in an older Gibson re-issue brown hard shell case. Overall Excellent - Condition.
×