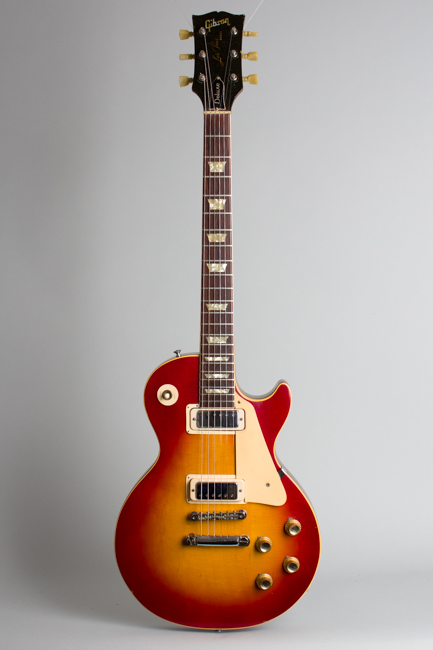 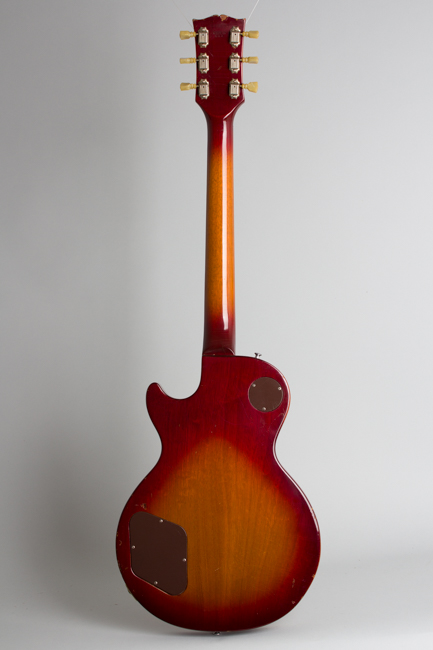 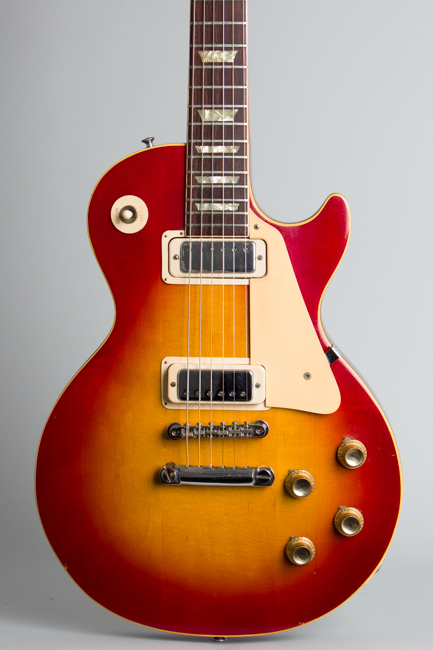 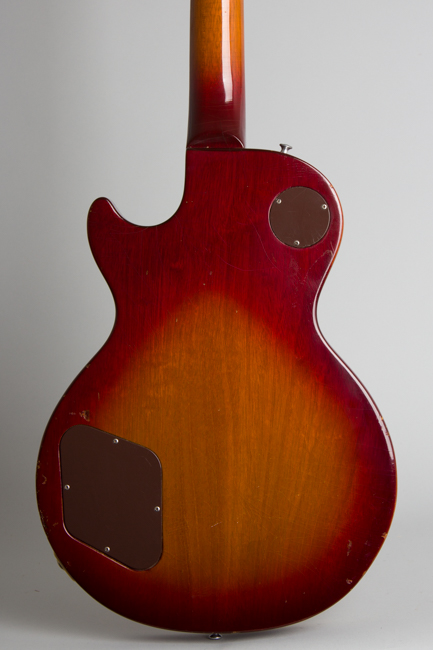 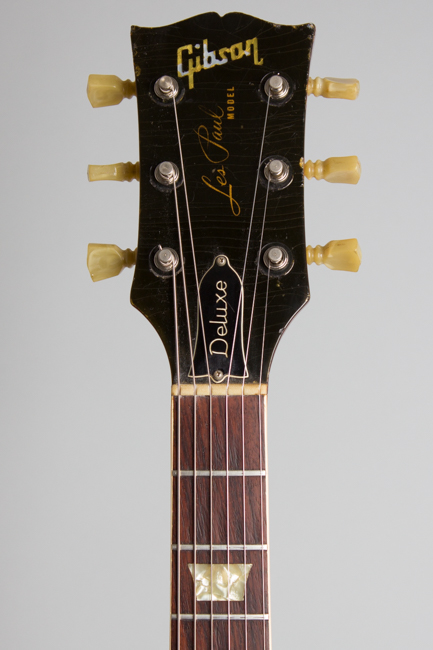 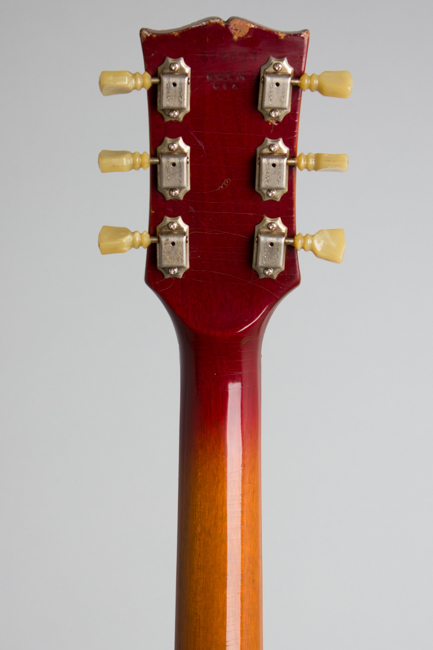 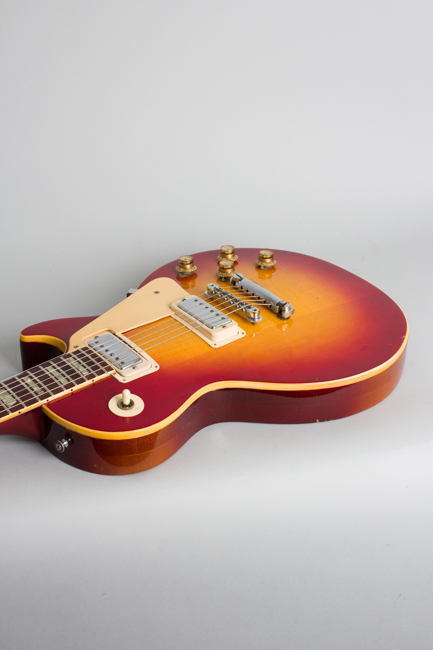 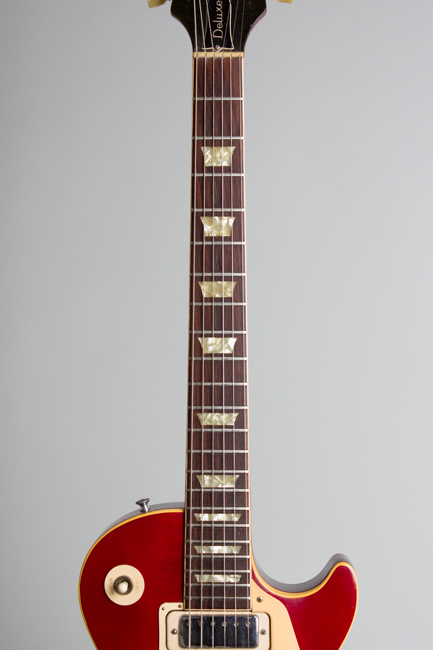 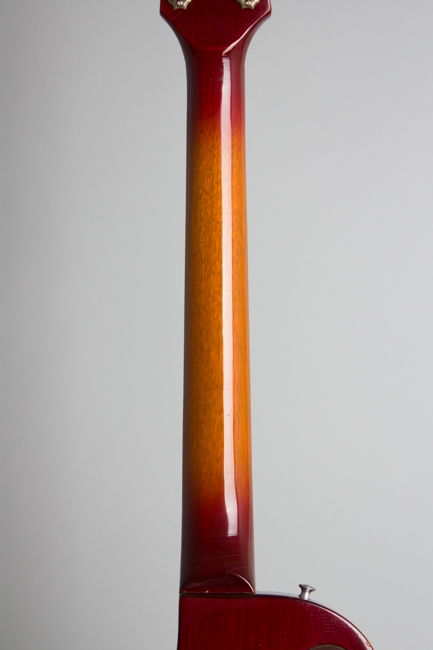 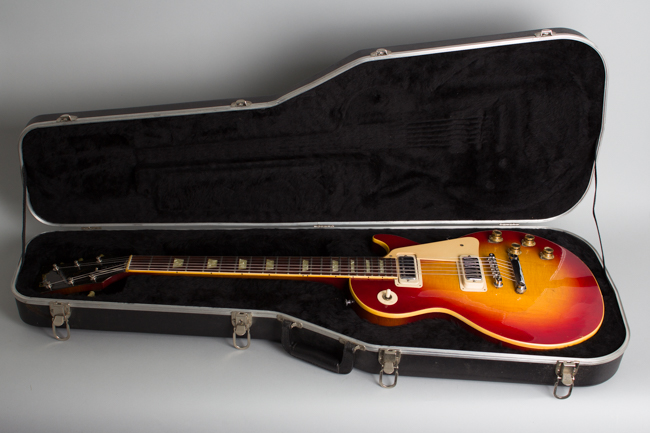 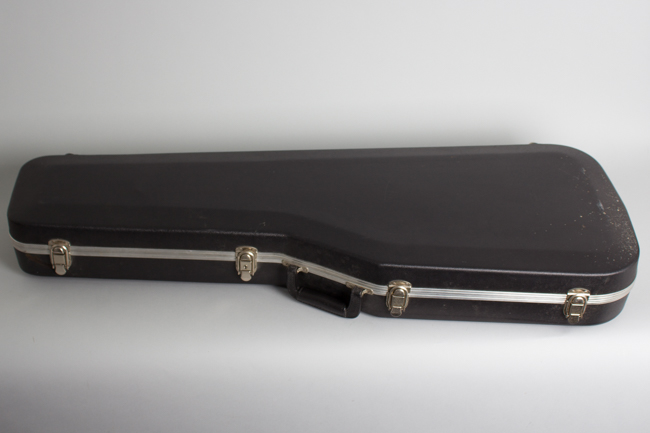 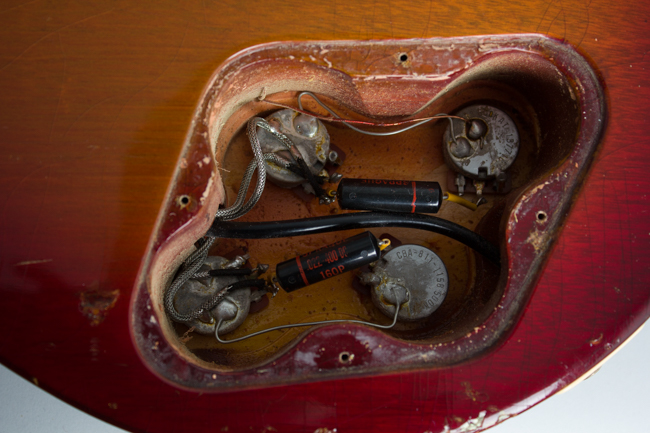 This is a nice example of a perennial 1970's favorite, the Cherry Sunburst Les Paul Deluxe. It has typical features for the era with a laminated mahogany body and neck and the maple-capped top finished in a bright cherry sunburst with virtually no fade. Fittings include two Mini-Humbucking pickups in cream P-90 style mounting rings, chrome Tune-O-Matic bridge and stop tailpiece, and 3-way switch with cream Rhythm/Treble ring, 'Gibson Deluxe" stamped Kluson tuners with keystone buttons and amber capped 60's style knobs. An oddity of the Deluxes from this specific time are the extra cream plastic rings pinned around the pickup routs, sometimes reportedly called "goof rings" as they covered up some apparently intermittent sloppy routing.

Serial numbers in this period are inexact but the pots are dated 7107 (7th week of 1971) so it's safe to assume the guitar was built that year, one of a paltry 220 of this then-new variant shipped out of Kalamazoo. This would be one of the first sunburst Deluxes off the line. Most early '70s examples are gold top models, which was initially the only finish the model was offered in. As the decade rolled on sunburst and other options became more common, but in early 1971 this was a novel and somewhat exciting new Les Paul variant. This one has seen some use but is still a great looking and sounding guitar, just past its 50th birthday.

This guitar shows some general wear but overall looks well preserved. It remains nearly all original, "Groverized" as many were but now restored with the exact correct original tuners, showing just some pressure rings on the headstock face as evidence. The cream plastic jackplate is a correct style replacement; all the other hardware is original. The finish overall shows some checking, dings and dents, with larger chips on the back and headstock rear but a relatively clean face. The cherry color is very well preserved with only minimal fade. It never suffered and neck or headstock issues as many did.

The original frets have been crowned down somewhat, but still have decent height and play very well. The fingerboard has only some light wear. The guitar plays and sounds exactly as expected, with a bright growl that can get quite nasty if desired through the right amp. The Les Paul Deluxe was the most popular "street" guitar here in NYC in the mid-'70's, and many young high-school rock star dreams were whetted staring at them in the windows of 48th Street when buying strings for the Univox or Ibanez you actually owned. This one did get the Grover tuner addition many endured but was spared the more intrusive indignities of the '70s (looking' at you, DiMarzio Super Distortion humbuckas) and is one of the nicer examples of the cherry sunburst variant we have seen. The case is a newer molded plastic unit, sized specifically for Les Pauls although it looks more Fender-y from the outside. Overall Excellent - Condition.
×