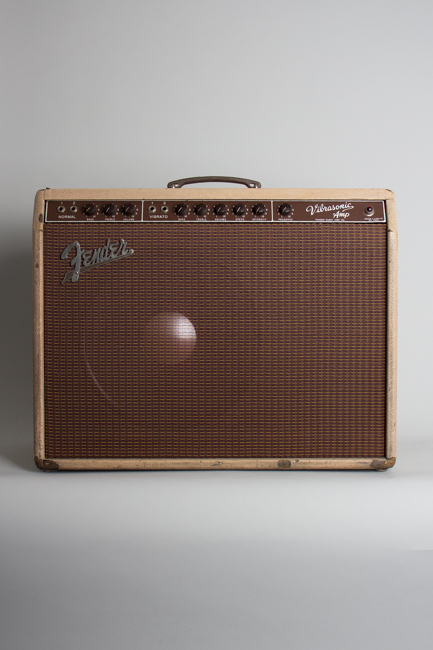 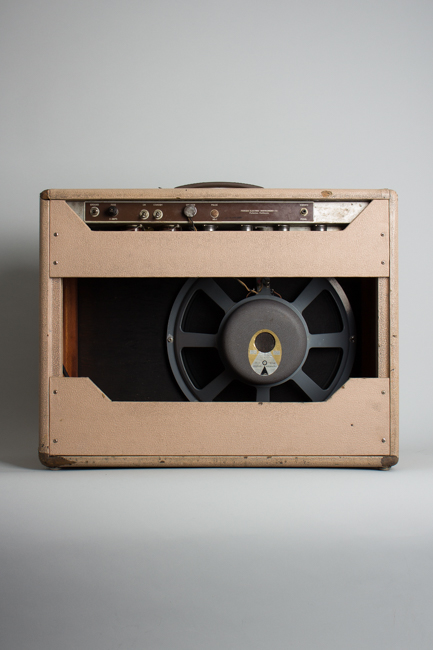 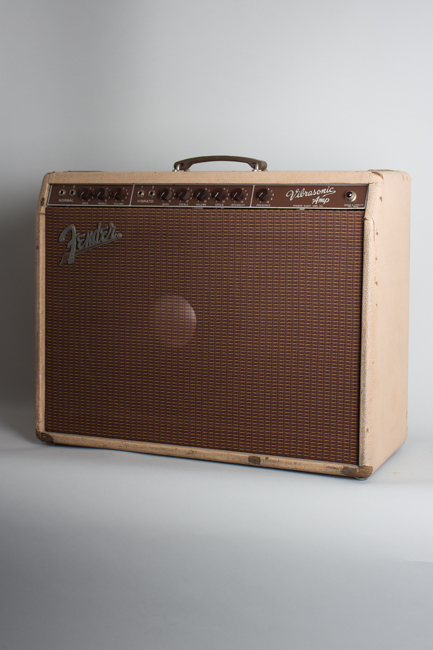 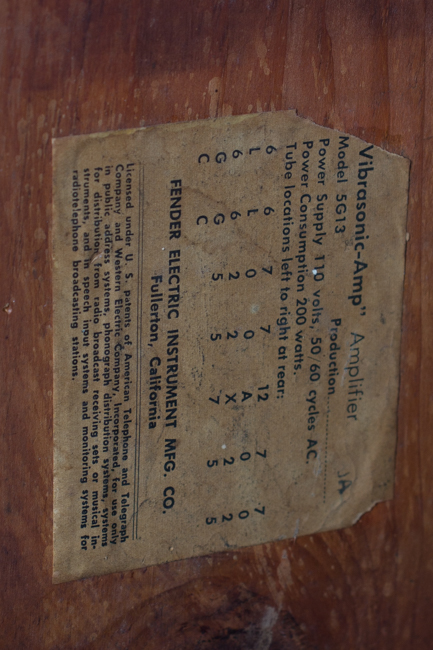 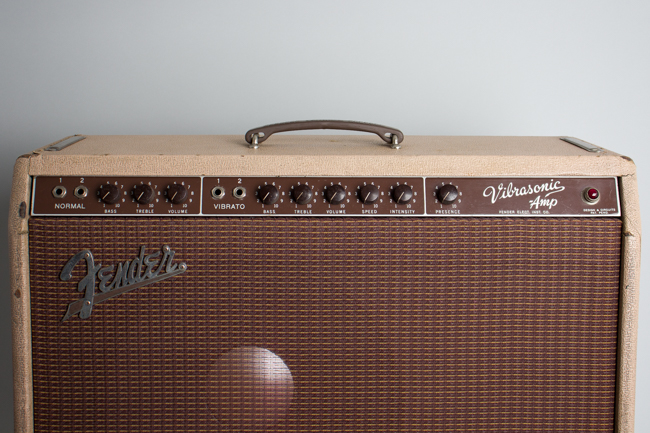 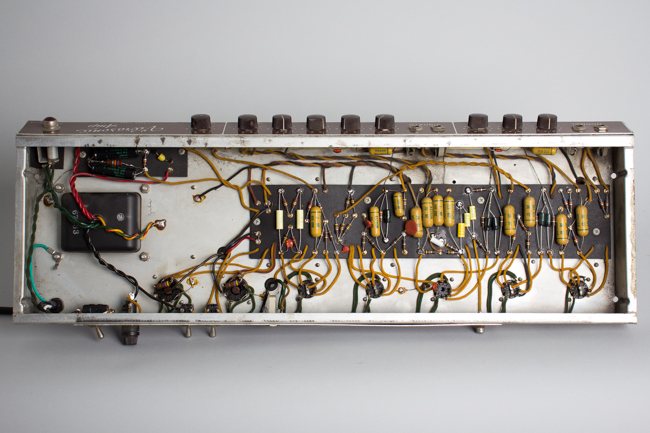 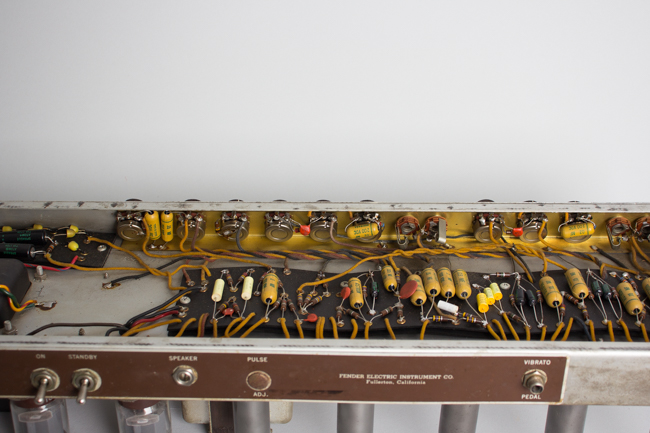 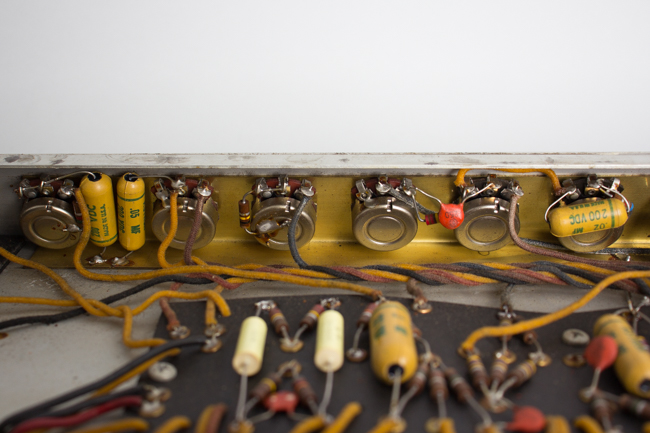 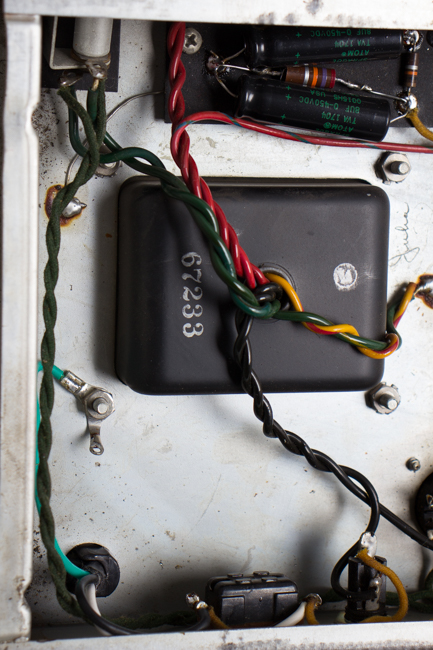 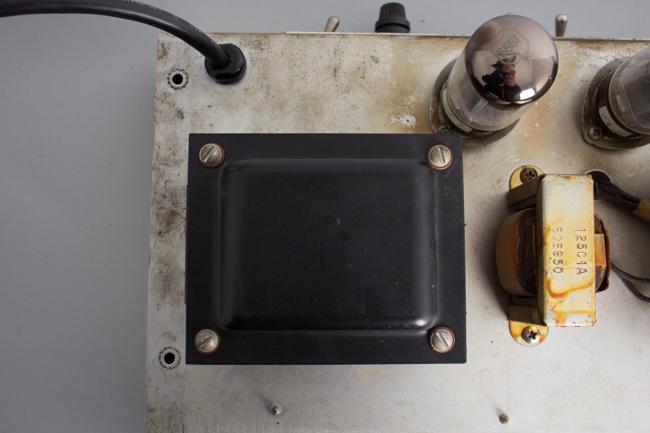 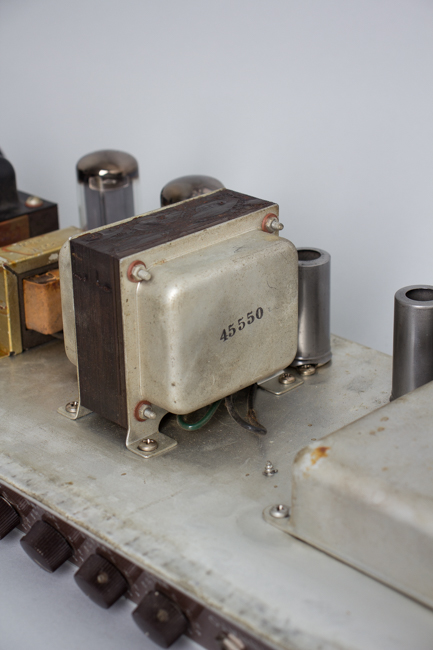 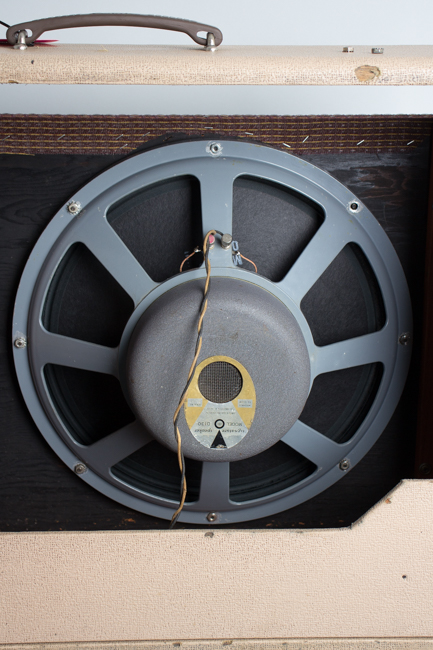 A very first for our showroom, this rare and very early Vibrasonic Model 5G13 is a very fine example of one of the true gems from Fender's often under appreciated early 1960s "Brown" period. Although there are always transitional amps from any era, more changes to Fender's line occurred in 1960 than any other year.

The Vibrasonic is a top-flight Fender model and one of the first of the company's novel designs for the new decade, a single 15" speaker combo covered in the brown Tolex just coming into use as the '60s dawned. The front-mounted control panel and all-new layout were just some of the long lasting innovations ushered in around this time. The Vibrasonic was just below the Showman in the line-up, with half the power tube compliment. It was the only other Fender amp to be issued with the iconic JBL D130 speaker. The Vibrosonic's dual 5881 power section yields around 40 watts of "clean and distortionless power", claimed Fender in their 1960 catalog, filled with iconic amps that would soon change the course of guitar history with their powerful overdriven tones!

A noteworthy feature found in the higher-powered models in the new line-up is the all-new harmonic tremolo. Unlike the bias-vary tremolo appearing on earlier Fenders and the lower-powered contemporaries which modulates the output volume, the harmonic vibrato circuit modulates higher and lower frequencies separately, at the same rate, but offset in phase from one another. There is no actually change in overall volume or pitch, but the faux doppler-effect created by the phase-shifting between high and low frequencies makes it sound like a mixture of both. It is a very cool sound and takes a whopping two-and-a-half preamp tubes to accomplish!

This amp's tube chart bears the stamp JA, dating the amp to January of 1960 and the very low serial number shows only 113 units were made at this point! The 5G13 circuit's tone controls have a very wide sweep for everything from classic hollow twang to warm, sweet sounds that will delight any jazz player. The JBL D130F speaker offers plenty of clean headroom on tap, but once you get above 5 on the volume dial the amp cascades into raucous, touch sensitive overdrive. The very early higher-powered models were designed with a solid state rectifier that helped make it bold, tight, and loud. The first amps also feature a rather peculiar original front-panel layout decision which put the volume control third, after bass and treble. This design received immediate backlash from players who found the volume control placement utterly confusing and the layout was changed to the more intuitive and now classic "volume, treble and bass" order.

This Vibrosonic is a stellar example. The cabinet is overall in very good shape for its age, save for a handful minor dings and dents primarily along the front and rear lower edges and corners. The brown Tolex covering is otherwise very clean and the front panel is mostly free of blemishes with all the lettering is nicely intact. The front grille cloth covering is impeccably clean and even the original molded plastic handle is intact. The original tremolo footswitch is also included.

Electrically, the Vibrasonic is nicely original. The original JBL D130 bears the serial number 46297; it has been professionally reconed and sounds fantastic. All the transformers are original; the power and output are marked 67233 and 45550, both likely made by Triad and the Schumacher-made choke is marked 606-950, dating it to the 50th week of 1959. For its tube compliment this amp features a pair of NOS Tung-Sol 5881 (6L6s) and an assortment of great vintage preamp tubes, mostly manufactured by RCA, GE, Magnavox and Mullard. The amp has received our routine maintenance, including the replacement of all electrolytic caps, a three-prong power cord, all sockets, pots and jacks cleaned and biased to spec.

This is a truly excellent example of a very rare and great-sounding amp from this short-lived era in Fender's history, offering a unique-sounding tremolo and a great punchy breakup at higher settings. With somewhat more headroom and clarity than the brown Deluxe and Super, this Vibrasonic is a very versatile gigging or recording amp that can keep up with a louder playing situation with pristine cleans as well as the classic cracking overdrive of the brown-era Fenders. Excellent Condition.
×