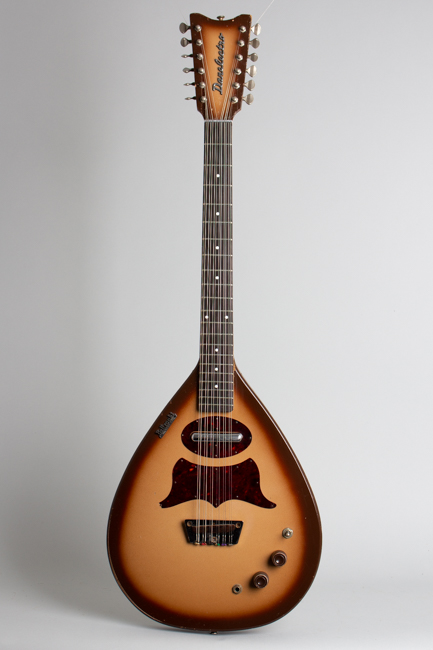 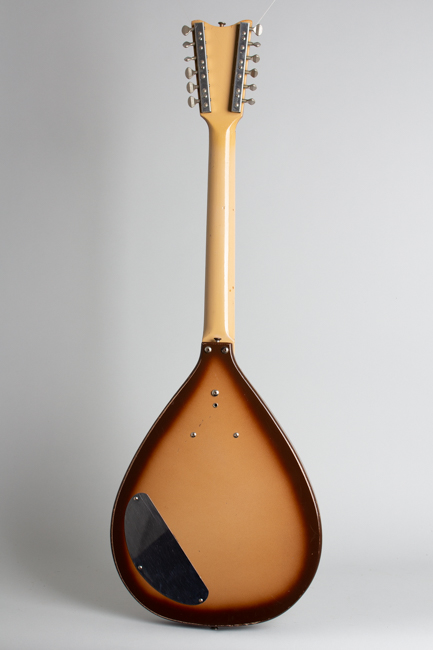 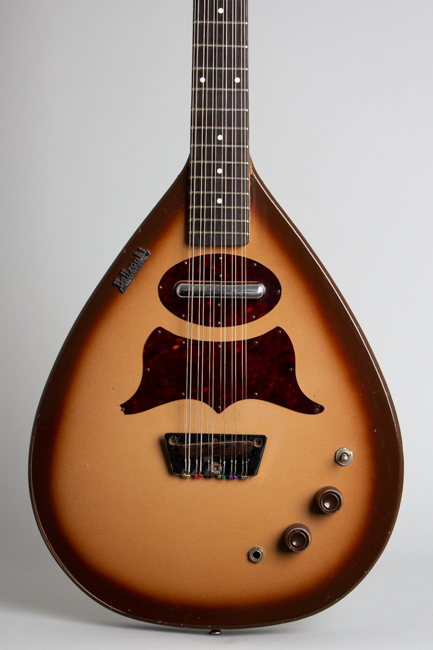 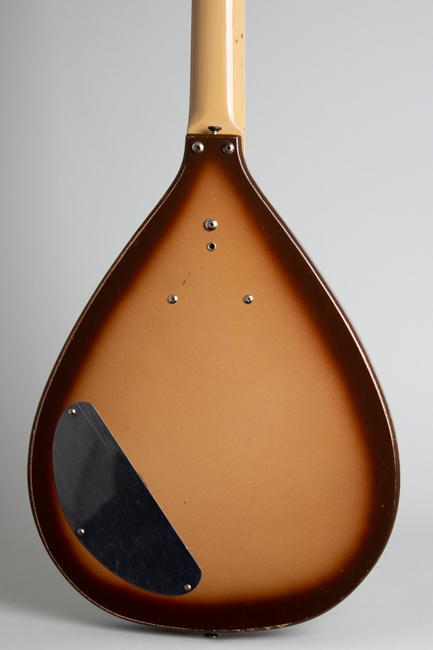 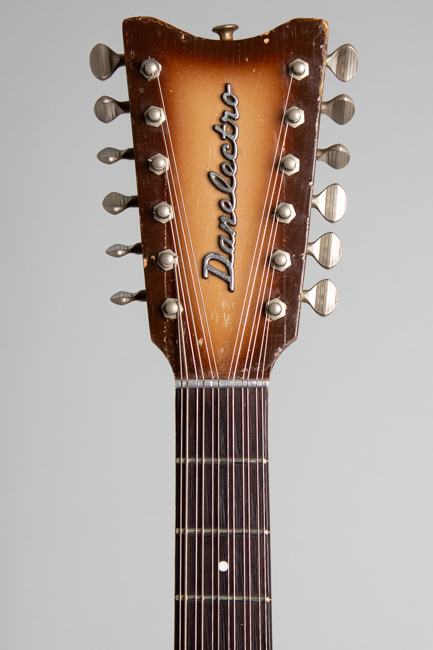 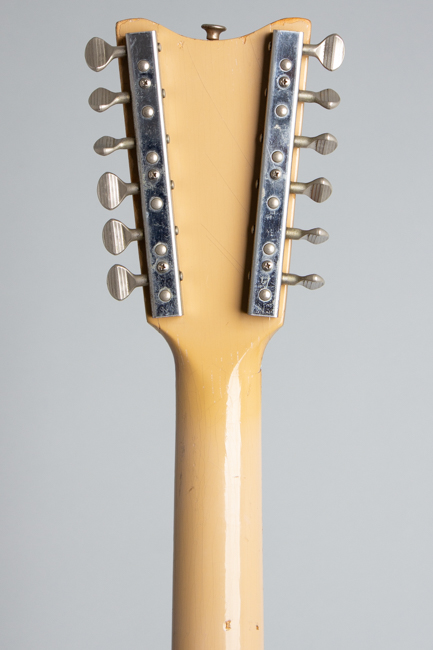 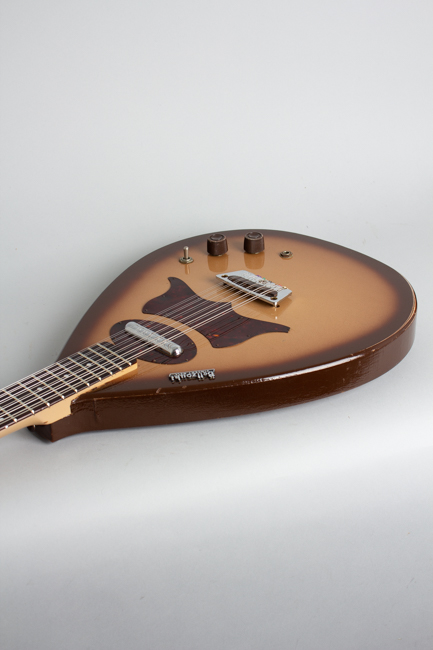 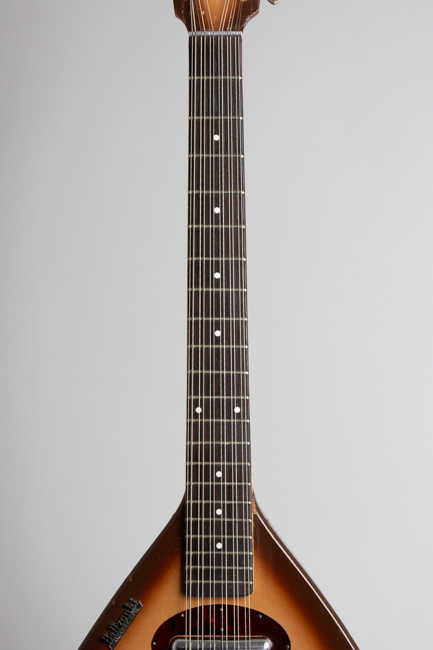 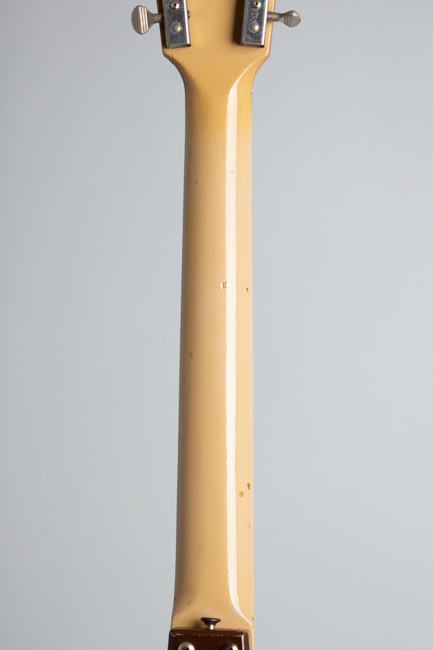 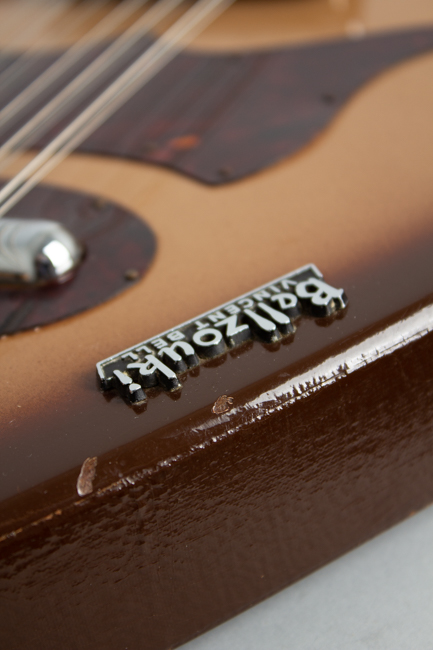 One of Danelectro's most interesting and original guitars was this rather unique creation: the Bellzouki. This was the FIRST electric 12-string ever marketed, predated only by the "top half" of the almost mythical Stratosphere Twin doubleneck and Gibson's subsequent and also extremely rare twin neck guitars from the late '50s.

Several years before Rickenbacker developed their famous 12-string, New York studio ace Vincent Bell went to Nathan Daniel with an instrument he'd been recording with -- a Greek Bouzouki tuned like a guitar. Together they developed two guitars based on this idea, of which this teardrop-shaped single pickup model was the basic version. They first appeared in the 1961 catalogs and were produced until Danelectro folded in the late '60s. There is also an old rumor that Danelectro had somehow ended up with a large quantity of .008 gauged string wire, and thus "invented" octave tuning for the "G" string pairs (older 12s usually featured a doubled "G").

This 1965 single-pickup Model 7010 Bellzouki has standard mid-'60s features. The tuners are "Skate Key" Danelectro-made models introduced around this time; there is a "BELLZOUKI-Vincent Bell" decorative plaque on the body. A typical if inexplicable feature is the strap button on top of the headstock, which may have been one of Bell's ideas -- it only appears on Danelectros with this headstock shape. The teardrop shaped semi-solid sunburst body is built in standard Dan-O fashion with a pinewood core and edging and Masonite top and back.

The single lipstick tube pickup is controlled with volume and tone controls along with a selector switch that engages with the tone knob for different tonal options. The bridge and neck are standard Dan-o pattern, this model marking the initial appearance of the wide "V"-shaped headstock later seen on several other models.

In general the Bellzouki is a somewhat underrated guitar; with a wide comfortable fingerboard and great-sounding Danelectro pickup, this is one of the better designed electric 12s, even in this single pickup configuration. It's interesting to wonder if the teardrop body shape was noticed at Vox in England; this model predated their solid-body teardrop Mark VI by several years. The Bellzouki is eccentric for sure, but a good-sounding instrument and a great testament to the talents of both Nathan Daniel and Vinnie Bell.

This old Danno shows some dings, scrapes and dents, but remains just about all original and in good playable condition. The body finish has more wear on the back than the face, while the back of the neck has a few deeper dinks but overall is relatively clean. The only alteration is the nut, which is a reproduction of the aluminum original with some minor finish patching around it. Everything else on the guitar is original. One small corner of the pinned-on pickguard is missing. This one saw some use but no abuse, a good example of this effective if slightly eccentric entry in the electric 12-string stakes. Excellent - Condition.
×