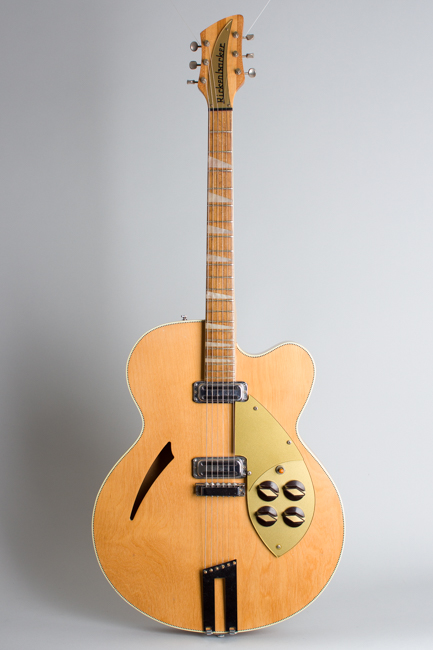 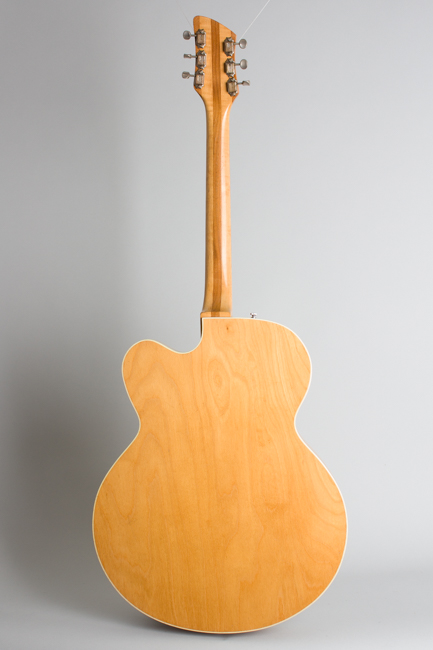 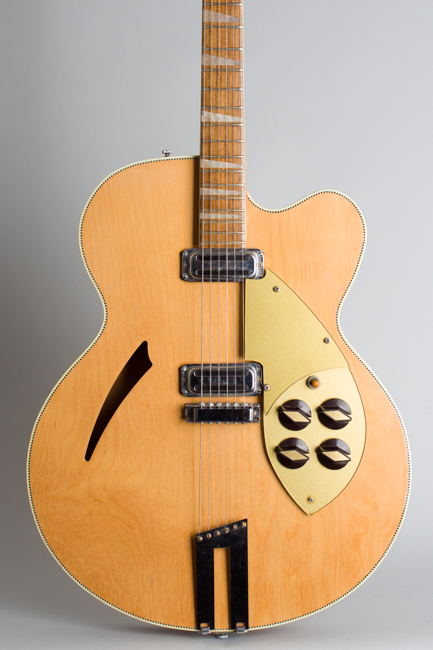 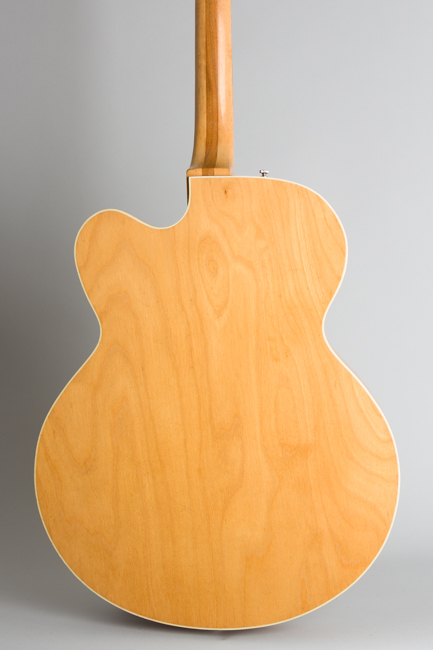 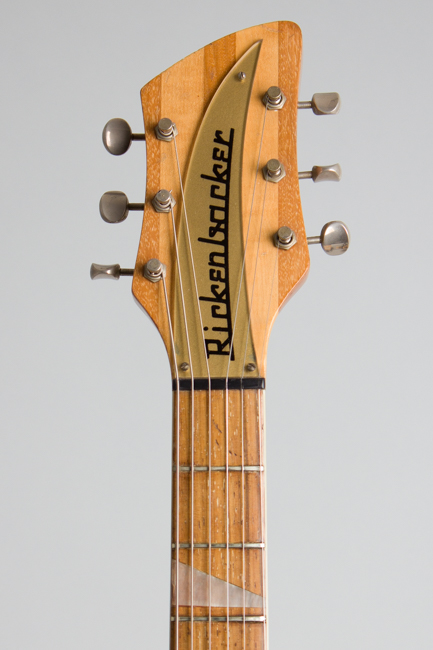 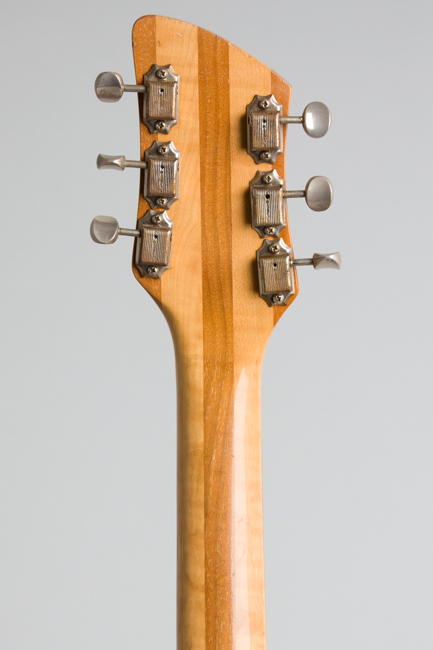 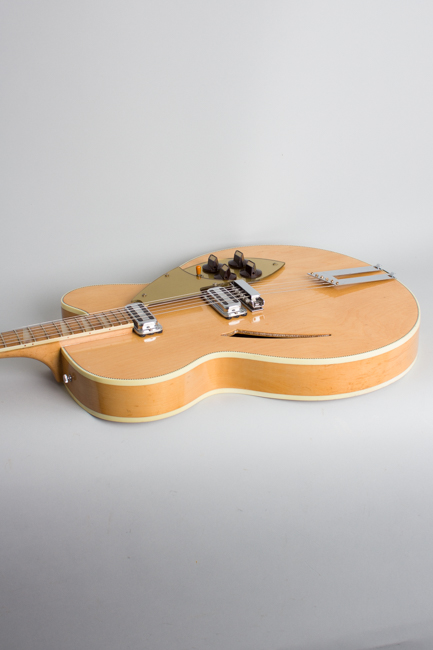 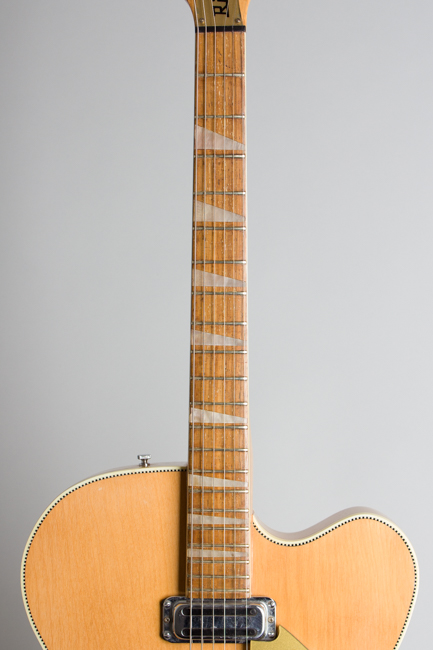 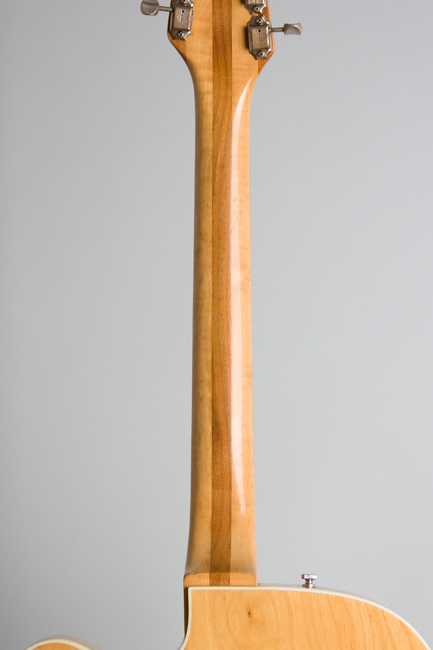 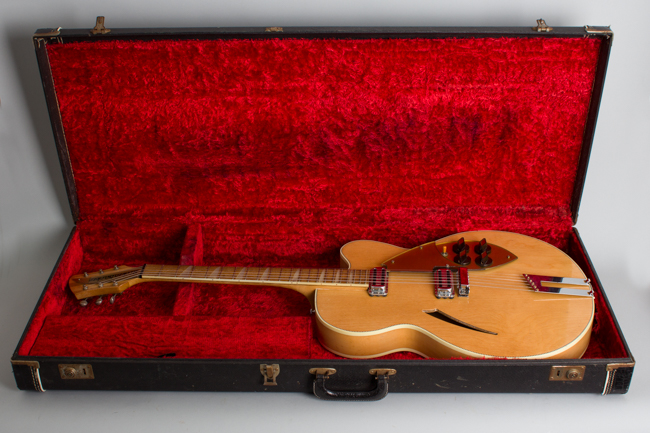 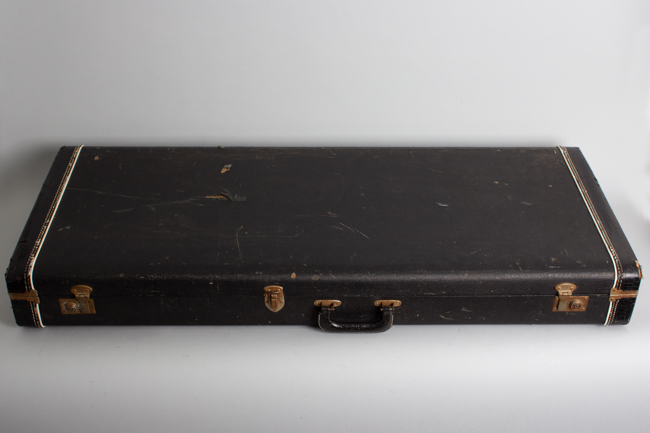 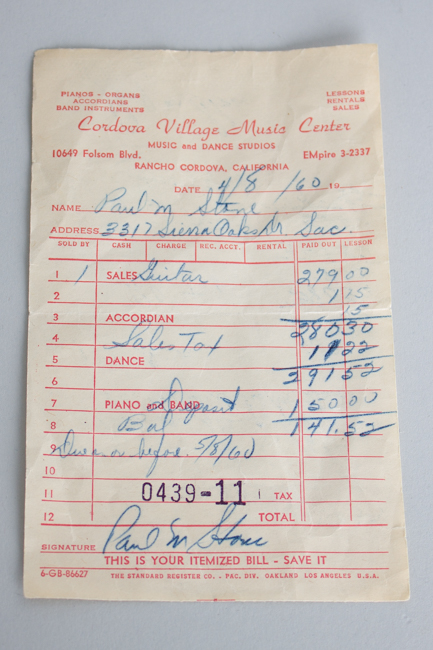 Sometimes we see a guitar that's simply so lovely we just have to stop everything to just appreciate it -- this is one of those. It is one of the most spectacularly well-preserved early Rickenbacker instruments we have ever seen, as well as one of the rarest. It even includes some fascinating paperwork as a bonus detailing the guitar's entire history.

Rickenbacker has created a number of iconic electric instruments over the last 90 years; some have become classics, while others have disappeared into obscurity. This Capri Model 360-F is one of the latter, and also one of the rarest and more unusual! The Rickenbacker 300 F-series "Full Body" models were originally offered as part of the Capri series of thinline hollowbodies starting in 1958-9, but despite remaining on the price lists well into the 1960s were produced in such tiny numbers as to be effectively discontinued almost immediately.

The "Full body" designation referred primarily to width rather than depth; the flat-topped hollow body is almost 17" wide but only 2 3/8" deep at the rim. The body shape with the single rounded treble-side cutaway is more traditional (and less striking visually) than the standard Model 310-375 familiar to most players; it was referred to as "semi-cutaway" in the company catalog and may have been intended to woo more conservative players to the Rickenbacker camp.

This guitar's other features are classic late-'50s Rickenbacker, including the "toaster-top" chrome pickups, double elevated gold-backed Lucite pickguard, "oven" style control knobs, gold nameplate on the headstock, flat plate tailpiece and adjustable four-point bridge. The finish on this guitar is a lovely example of "Maplego" which is the company's moniker for a clear natural lacquer. The top and back are bound, with the distinctive checkerboard pattern around the top edge seen on many deluxe Rickenbackers.

The neck is the standard Rickenbacker laminated maple/walnut style with a single truss rod, not the double-rod system used later. The fingerboard is bound and inlaid with the early style "slash" inlay that is another Rickenbacker trademark. Due to the completely different heel design, these full-body guitars do not suffer the neck-angle issues that now often plague the more familiar Capri models.

As well as looking like no other instrument, the 360-F is a unique feeling guitar. The large body with no arching gives it a slightly "flattened" look but it plays pretty much the same as more familiar period Rickenbacker Capris. The neck/body joint is far more substantial than the standard Models, and the whole instrument has a much more solid feel. The sound falls into the traditional Rickenbacker sonic niche, but with added acoustic depth and warmth due to the much larger body cavity.

The "F" models were prominently featured in Rickenbacker's 1958-9 color catalog but sales-wise were far less successful commercially than the more familiar double cutaway Capri models-only a small number of any given model were been produced before the entire series slid into obscurity. The only published production figures available indicate a total of 68 Model 360-F's shipped in 1959-61 in all finishes, actually the most "popular" model in the series. 40 of these were in natural; this is one of 16 listed as Mapleglo shipped in 1960. The original pots are coded to the 6th week that "peak" production year.

These guitars are now seldom encountered in any condition, let alone as superbly well preserved and documented as this one. The original retail sales receipt is included, as well as a photocopy of the actual shipping document from the distributor Radio-Tel. These indicate the guitar was shipped out with the case in March 28 1960, and purchased only just over a week later on April 8 from Cordova Village Music Center in California. It was sold for $279.99 (a $20 discount from list) and paid over two installments. As well as being one of the very few original "F" model Capris we have encountered, this is absolutely the finest.

This is a truly fantastic example of an early full-body Rickenbacker Capri in exceptionally fine original condition. There is some very light wear and minor checking to the clear finish with minor dings, dents and scrapes. Overall but the guitar appears not heavily used and shows no heavy wear spots, alterations or repairs. The fingerboard has some minor wear but the original frets are very well preserved, and playability is excellent.

Sonically this guitar performs exactly as expected, with the classic Rickenbacker chime enhanced by a deeper body resonance. The original bleed cap has not been removed from the wiring circuit, so the bridge pickup has the typically bright and thin sound by itself but mixes perfectly with the neck unit for a nice range of tones in the center position.

The original rectangular hard case is present showing somewhat more wear than the guitar, mostly external. It is covered in a darker material than the standard greenish/grey mostly seen on Rickenbacker cases from this period but is definitely original to the instrument. Including the documentation provided this is about as fine a package or Rickenbacker delight as we can imagine! Excellent + Condition.
×