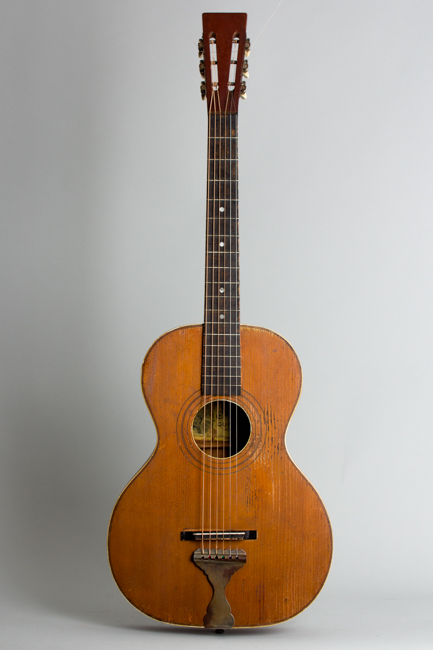 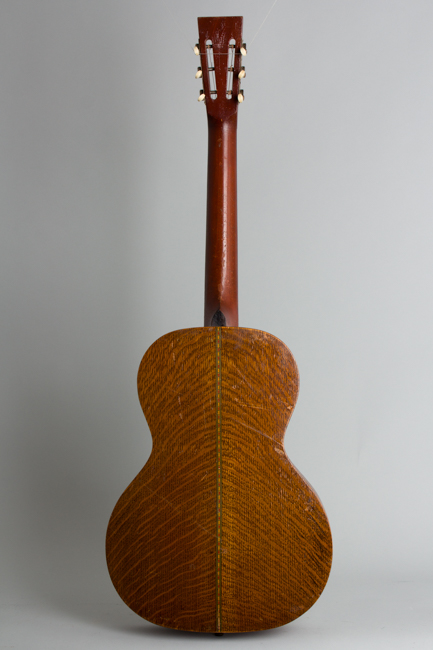 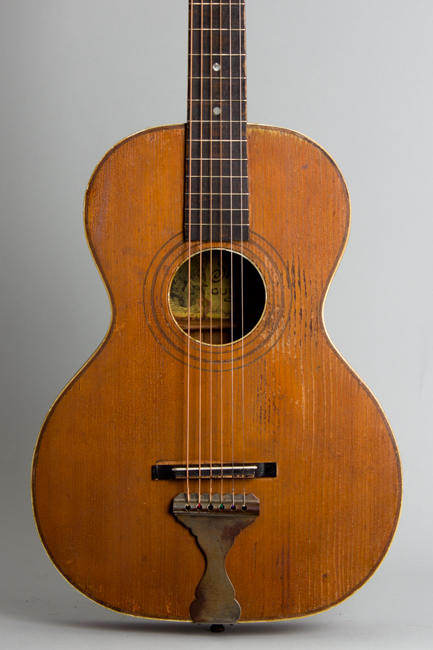 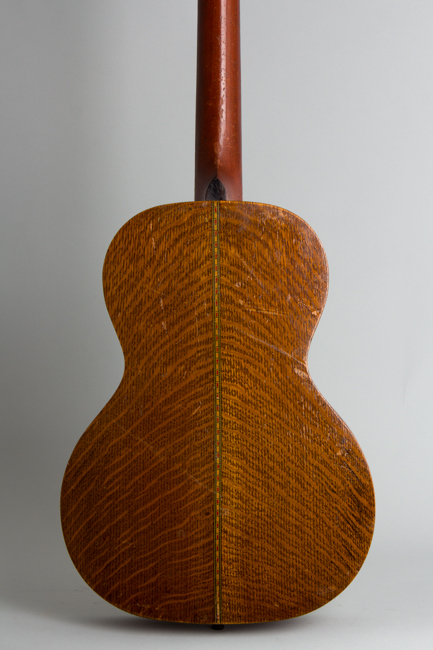 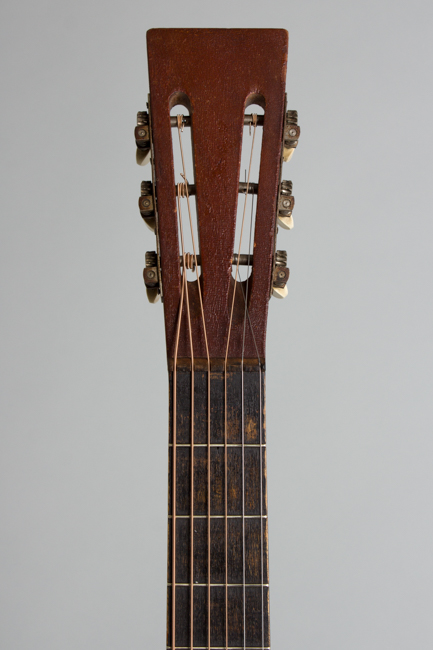 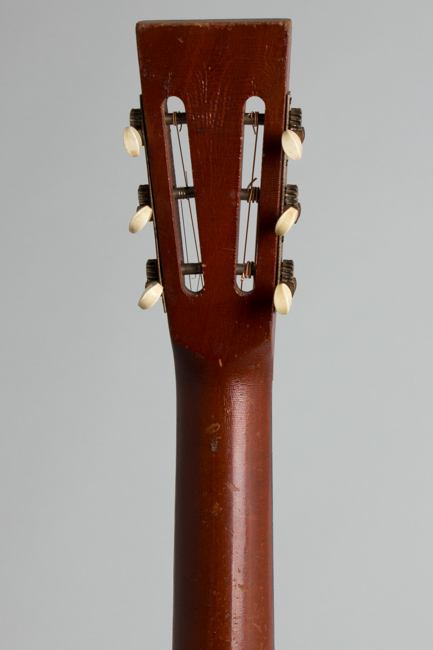 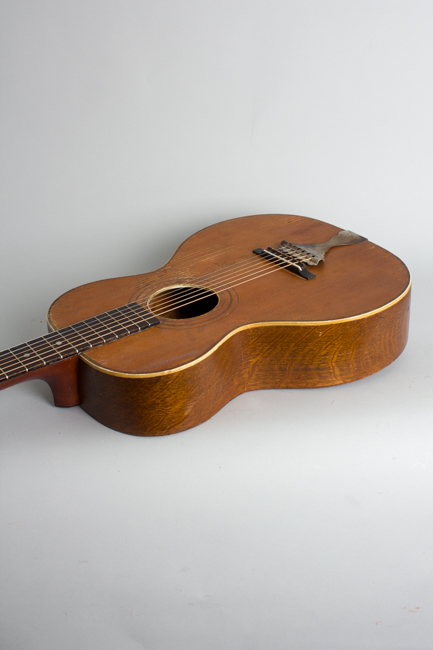 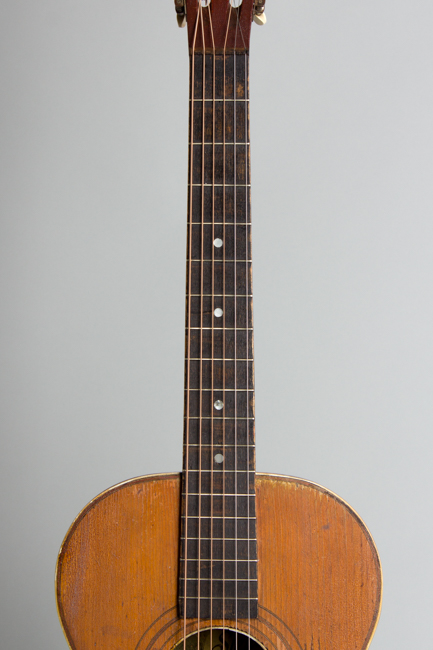 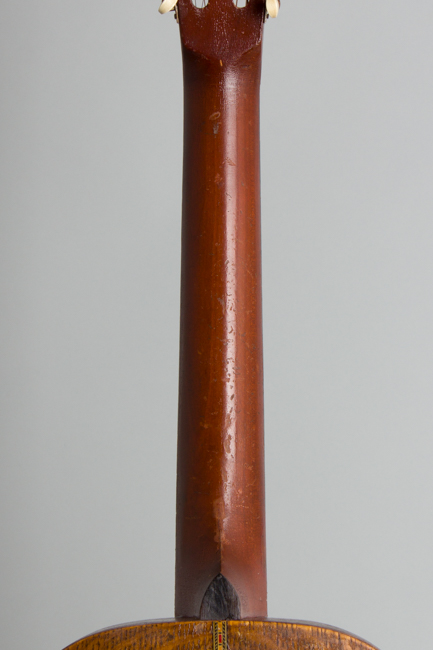 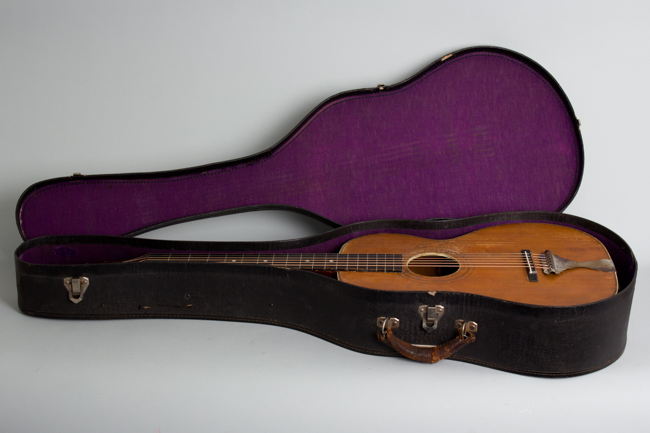 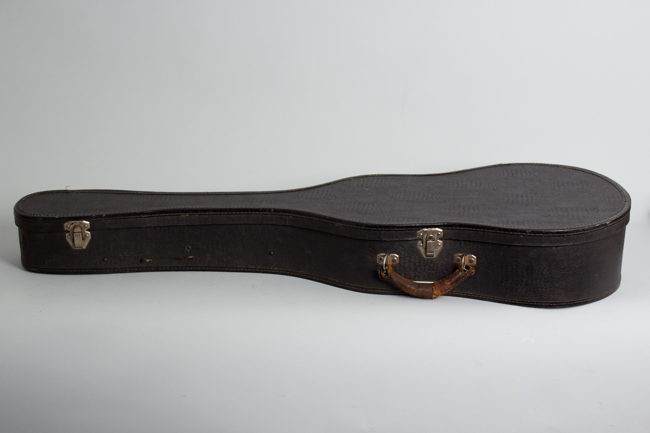 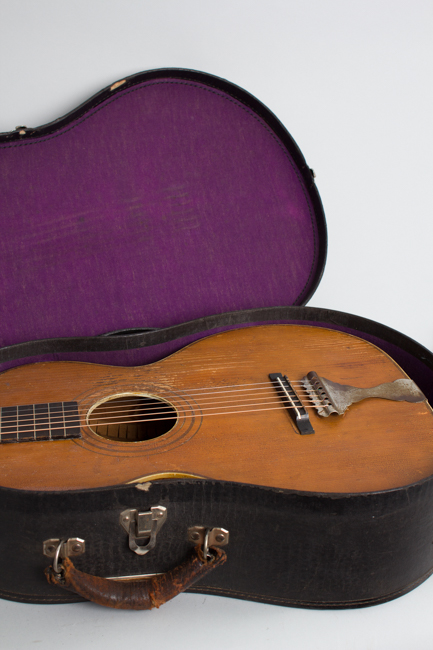 This is a somewhat worn-in and super vibey Oscar Schmidt-made Stella guitar, yet another example of the endlessly varied pre-war instruments marked with this iconic blues-approved brand. It has been well used over close to 100 years but remains a fully playable icon and a direct link to the pre-WWII blues tradition. These inexpensive but solidly made Stella brand guitars were often the only decent instruments affordable to rural Americans of every stripe, and offered great looks and good sound for the money. When asked decades later what guitars the pre-war bluesman he championed played, early talent scout H.C. Speir responded "Stellas, they all played those old Stellas".

Over a production history from the late 19th century into the mid-1930s, the Oscar Schmidt factory in Jersey City produced seemingly endless variations of their Stella and Sovereign branded guitars. This is a concert sized guitar built of an interesting mix of woods (oak, spruce and poplar mostly) with fairly plain cosmetics. The figured oak body is very attractive but somewhat uncommon for a Schmidt made guitar, this timber is more often associated with Chicago makers like Lyon & Healy. This instrument carries the classic yellow "Stella Guitar" label in the soundhole, the earlier version showing two musicians presumably enjoying their Stella instruments with no additional text.

The spruce top has multiple layers of trim around the outer edge and soundhole with the edges bound in white. The figured oak back is not bound, but ornamented with a decal backstrip running down the center. The dyed maple floating bridge and flat-plate metal tailpiece are original with a later saddle. The tuners are standard period strips but with the shafts peened to the gears instead of screwed, another oddity more typically seen on Lyon & Healy instruments.

Internally, the construction is typically Schmidt/Stella including the 'lazy" square un-mitered kerfing under the top. The 13 7/16" wide 12-fret body has a ladder braced spruce top with a large flat bridgeplate in the classic Stella mode. The 24 3/4" scale neck is slimmer than some Schmidt guitars with a much softer "V" profile than most of the Stella models we have handled, giving this one a much less archaic feel. The ebonized fingerboard has plain pearl dot inlay and an ebonized maple nut.

This is a very good playing and sounding guitar of its type. Like many Stellas it seems happiest in open tunings and is perfectly suited to the sort of pre-war blues and hillbilly stylings that make players lust after an original Stella in the first place. This is a genuine relic rough-but-ready showpiece that would stand out in any context!

Overall length is 37 3/8 in. (94.9 cm.), 13 7/16 in. (34.1 cm.) wide at lower bout, and 3 3/8 in. (8.6 cm.) in depth at side, taken at the end block. Scale length is 24 3/4 in. (629 mm.). Width of nut is 1 3/4 in. (44 mm.).
This guitar is structurally solid and a very good player, somewhat worn in but with these Stellas the funk of the ages is a big part of the story. It appears to have been played for decades, with some older typical repair work but nothing tragic. The original varnish finish has VERY heavy checking with some general wear just about everywhere. The top finish is worn through from picking below the strings and the back has some odd zig-zag lines that appear to be an eccentric case of vinyl strap burn. Still, the only non-original component is the replaced bridge saddle, all else seems as it was built.

The original small frets are intact, lightly crowned and not much subsequently worn and quite playable. There is only light wear to the dyed fingerboard, mostly on the edges. The neck has been reset, the action very good and the guitar is perfect for the types of blues picking Stellas are De rigeur for. There are no cracks in the top or back; a long split on the mid-upper side and another short one on the kerfing line below the heel are solidly sealed up. Some errant glue is visible around the heel. The interior is clean and intact as Schmidt made it and has not been altered of re-braced as many have.

This old Stella plays today at least as well (probably better) than it did 100 or so years ago and has strong enough mojo for anybody who has ever coveted an old Paramount 78 to be self explanatory. While it won't replace anyone's Martin as an everyday guitar, if you want a real relic of when blues was only heard in the street, plantation or on shellac discs this is it. It even includes (improbably) a correctly fitted period) chipboard case that has somehow survived more or less intact for 90 or so years. Overall Very Good + Condition.
×