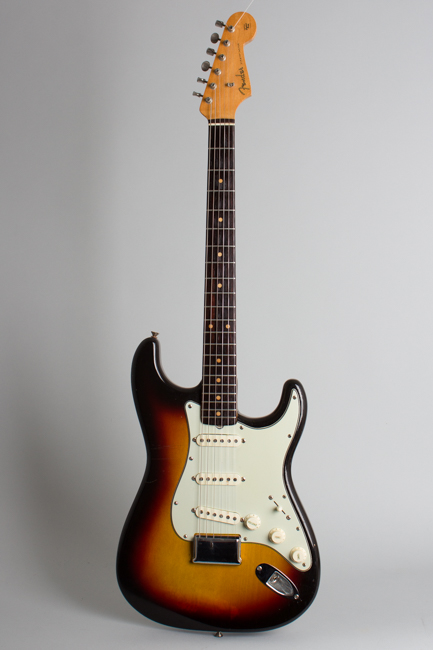 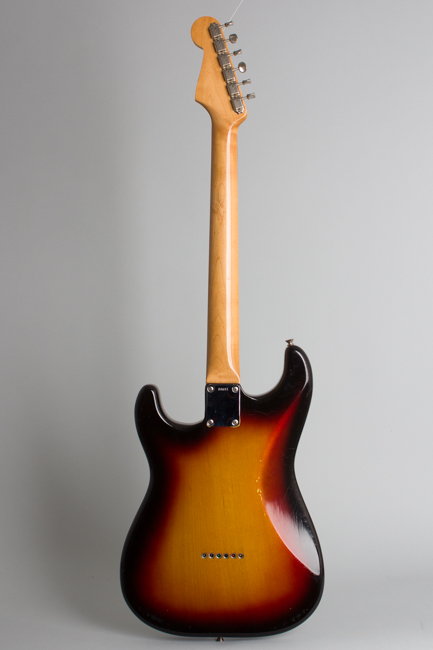 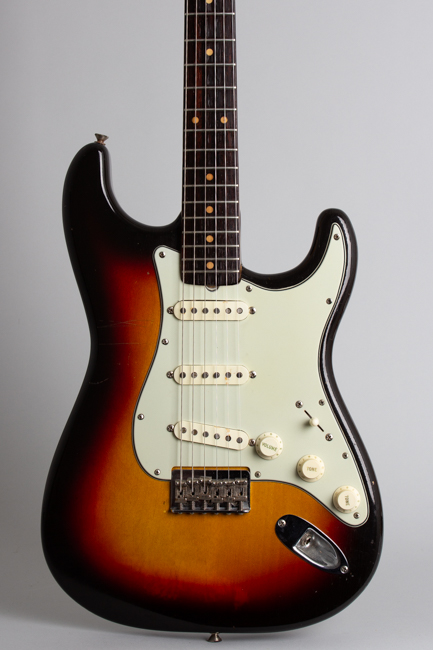 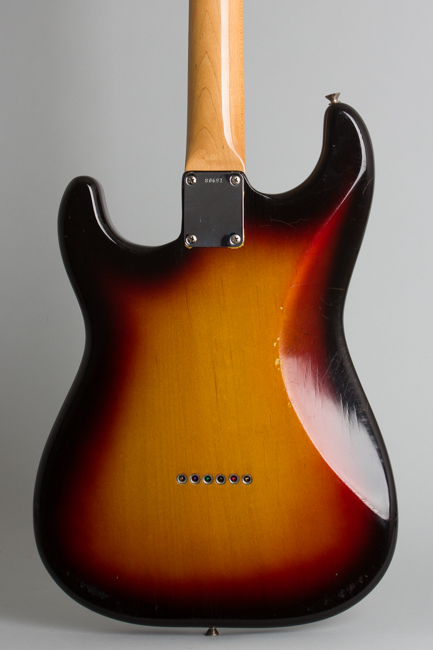 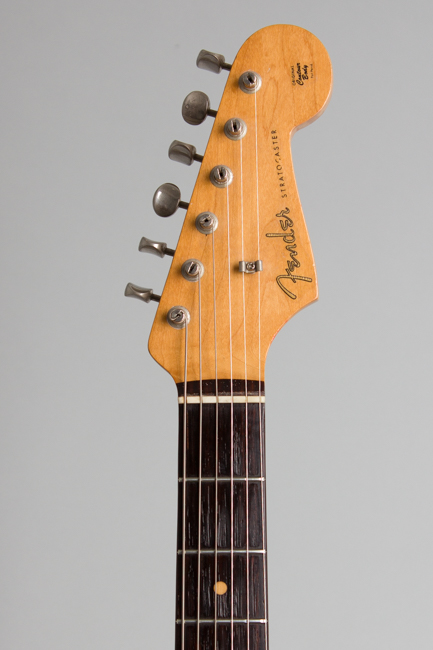 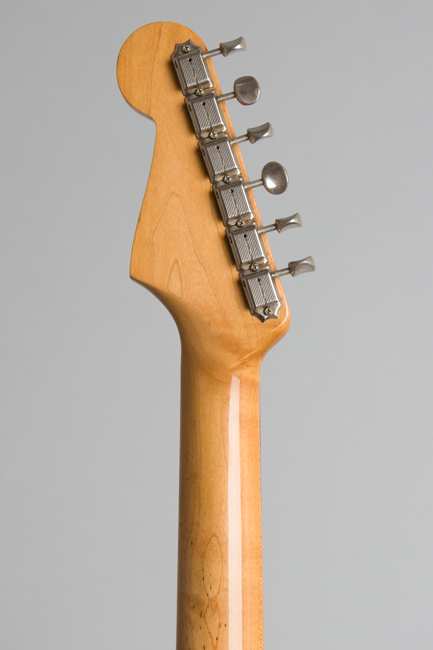 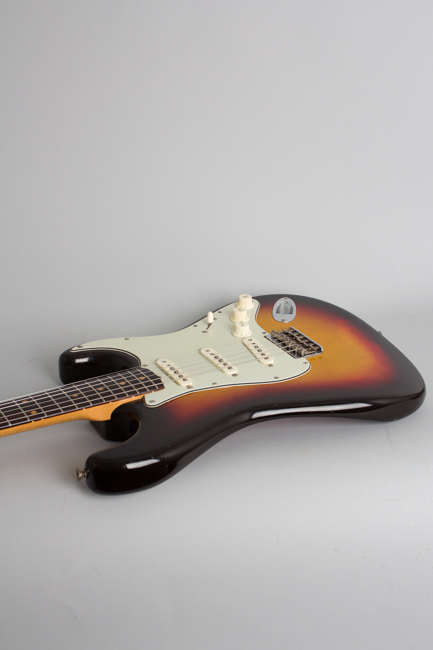 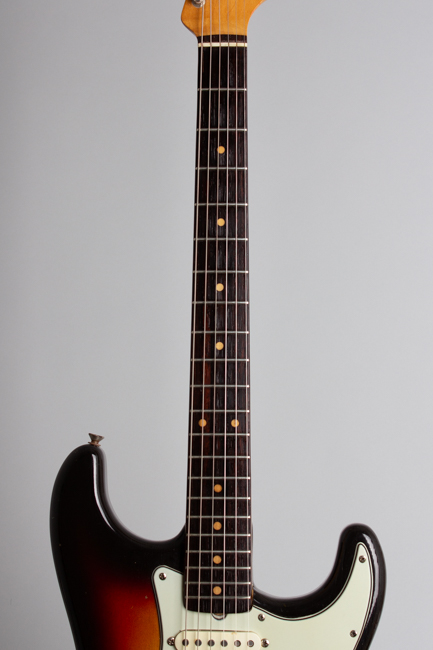 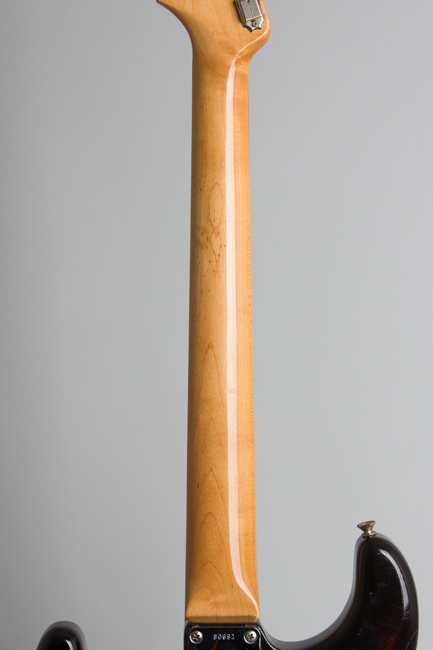 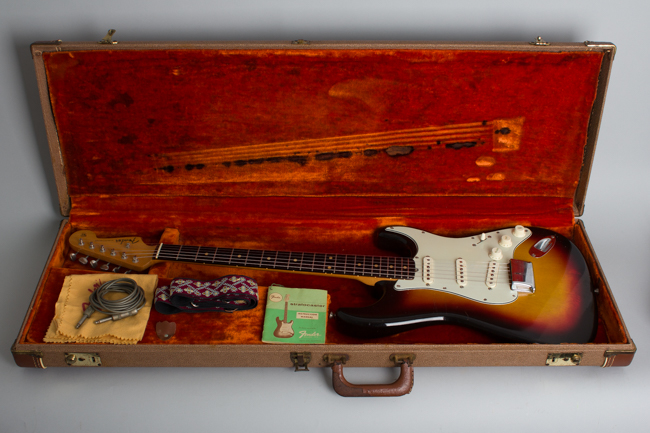 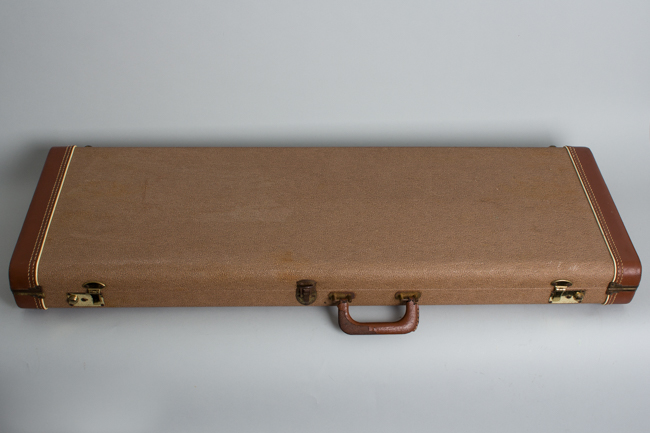 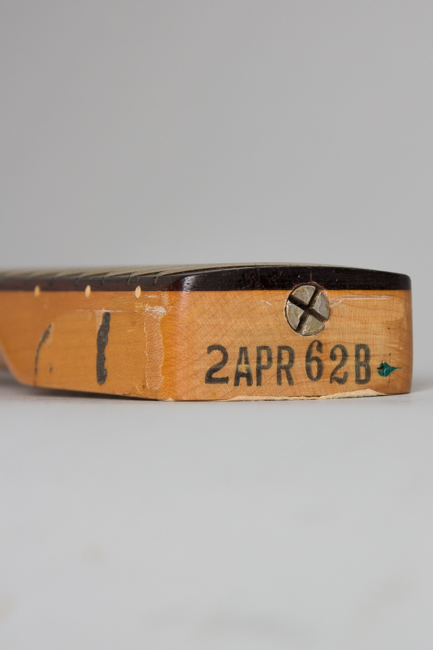 This is a beautiful and very well-preserved example of an interesting Fender rarity: an original 1962 "Hardtail" slab board Stratocaster, built without the tremolo system that is one of the model's hallmarks. While the less expensive "non-trem" option was advertised as available for the Stratocaster from the beginning, relatively few were actually ordered or produced. This is especially true in the early to mid 1960's when the whammy bar was deemed a necessary part of any rock & roll or country player's sonic palette, and even beginner grade guitars were expected to offer the feature.

This Stratocaster dates to mid-1962, and has a late production example of the 1959 style "slab" rosewood fingerboard on the neck which is dated April 1962. The pots are coded to the 18th week of that same year, indicating the neck sat in stock for a short time before the guitar was assembled. In the spring of 1962 Fender was focused on launching the brand new Jaguar; along with the Jazzmaster these newer "offsets" were the company's focus at the time. The Stratocaster and Telecaster were still popular instruments, but amazingly enough seemed a bit "old fashioned" at the time compared to the newer sleeker Fender offerings! We have seen quite a few 1962 Stratocasters, but very seldom encounter a "hardtail" from this period.

Apart from the lack of a trem system this Strat shows typical period features. As noted the rosewood fingerboard is the original thick version used from mid-1959, now referred to as the "slab board" to distinguish it from the thinner laminates Fender began using after mid-1962. It is inlaid with the "clay" dots that would also be phased out at the end of 1964. The neck carries the original smaller Pre-CBS style headstock with the older gold "Spaghetti" logo decal also supplanted in '64. These are subtle changes but make a difference to Strat afficionados, giving each period's instruments their own distinctive character.

The finish on the body is a beautifully blended 3-color sunburst that has faded very little over the decades, retaining a strong red hue. The pickguard is a superb example of the lovely thick greenish-hued nitrocellulose that would also disappear in 1965, replaced by plain white plastic. All three single coil pickups have a strong well-defined tone. The sound of this non-trem guitar is somewhat different in detail from a standard Stratocaster as the slight natural "reverb" provided by the tremolo springs is absent. The tone is a bit more Telecaster-like as it shares that model's through-body stringing, but the unique Stratocaster electronic array remains intact. "Hardtail" Stratocasters have remained a minority taste through the decades but there are players who prefer them to the common tremolo models, and sometimes to any other guitar.

All early 1960s slab board Stratocasters have become a player's favorite over the last decades, offering up a somewhat meatier tone than either the earlier maple fingerboard guitars or the later CBS period examples. For the player who has slab-board and non-trem on their checklist of favorites, this is a real find. A unique feeling and sounding Strat, this singular '62 stands as a perfect example of what Fender's reputation and success were built on before "things started a-changin" in Fullerton with the January 1965 sell-out to CBS.

This is a beautifully original guitar, showing some minor wear but still in excellent overall condition. The sunburst body finish retains very strong color with minimal fade to the rich red pigment and a very nice largely unchecked patina. Overall the lacquer is better preserved than many with some typical dings, dents and scrapes mostly to the lower sides and back. There is very little of the typical armwear on the upper body; in the area behind the bridge it appears the clear lacquer topcoat is somewhat rubbed away. this is not too serious and really more visible under blacklight than to the naked eve. The body has a some small touched-in spots here and there (mostly on the edges) but no overspray or other large-scale finish tampering. The neck has some minor wear with a few tiny loss spots to the decal.

All hardware is original and fully intact. The beautiful "green guard" has shrunken up just a bit but not as much as many have; none of the tips or screw holes are broken out but it does have a small amount material cut away by the truss rod to facilitate adjustment. There are some small odd stains on the pickup covers but no damage to the plastic. The bridge base, saddles and screws have just very light corrosion and everything is fully functional. The bridge cover has a spot of plating loss on the top; it actually looks like it was on much of the time and took the brunt of wear from the player's hand.

Internally the guitar is unaltered with all original components and none of the solder joints appear redone; the masking tape wrapping the leads is still intact. The black-bobbin pickups are all very strong and sound great in any combination. The original frets show some wear and a light re-crowning but play very well. The guitar is housed in a very nice original brown Tolex HSC, which shows only minor wear mostly to the handle covering; the leather ends are better preserved than many. There is a stain along the inside of the lid from something resting there; perhaps the same thing that left small marks on the pickup covers. Included is an old period strap, cable and later 1960s Fender polish cloth, but the best piece of "Case Candy" is the original green Stratocaster hang tag/instruction booklet in excellent condition which is now a major collectible in itself. Overall a wonderful and rare package of Fender delight. Excellent Condition.
×