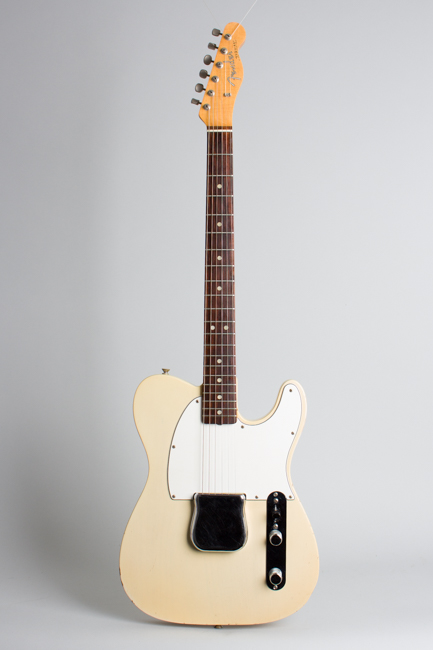 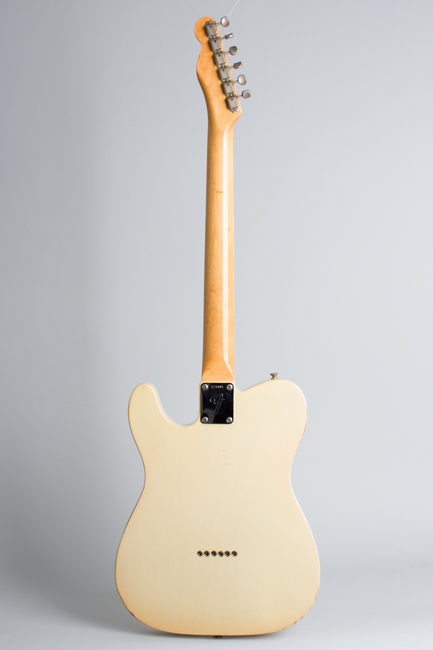 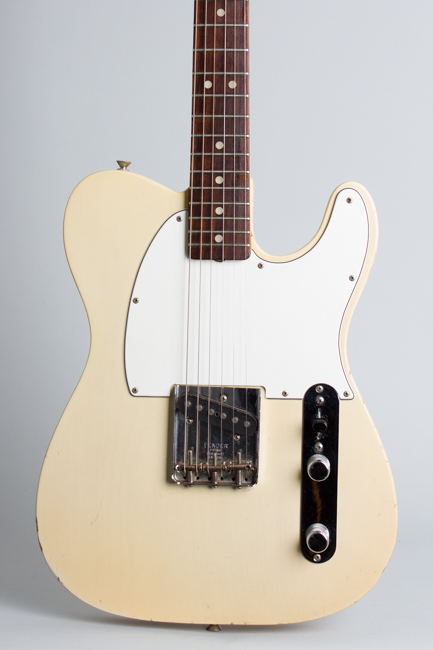 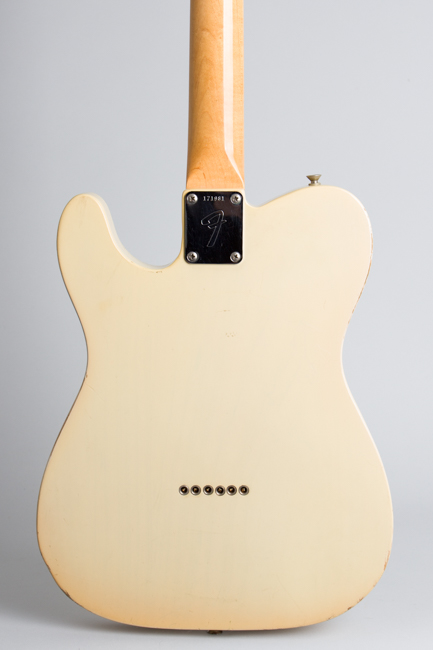 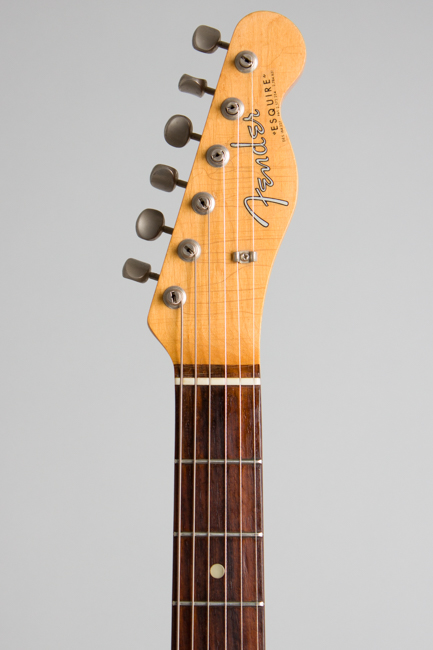 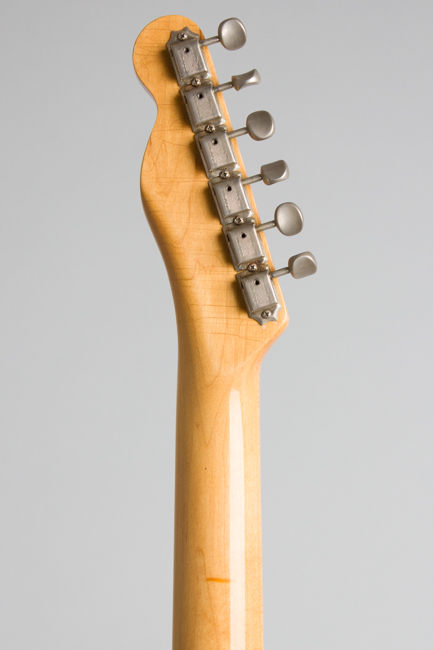 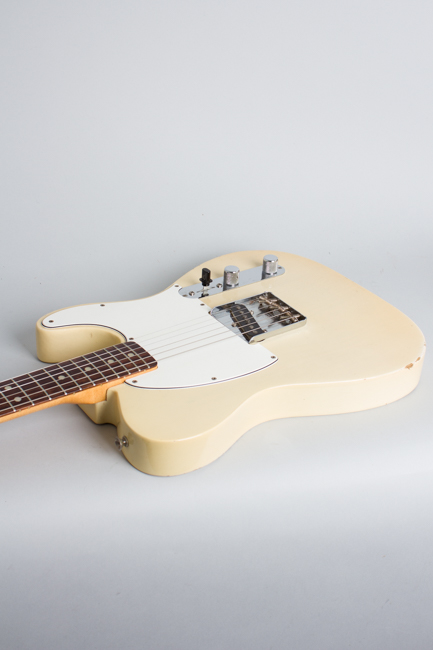 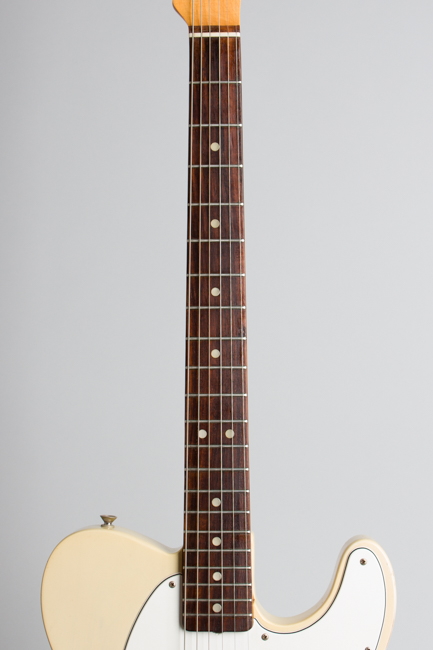 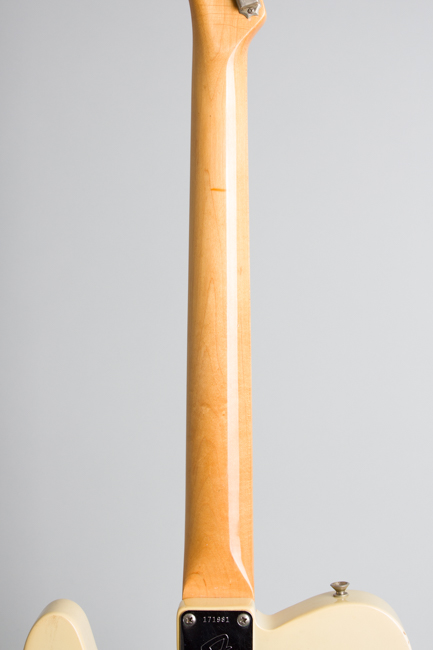 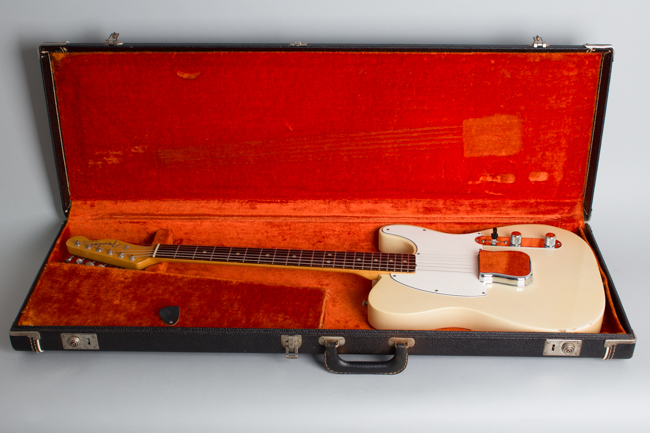 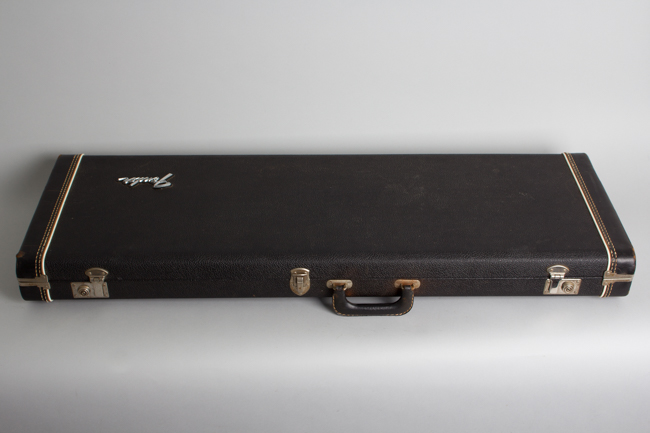 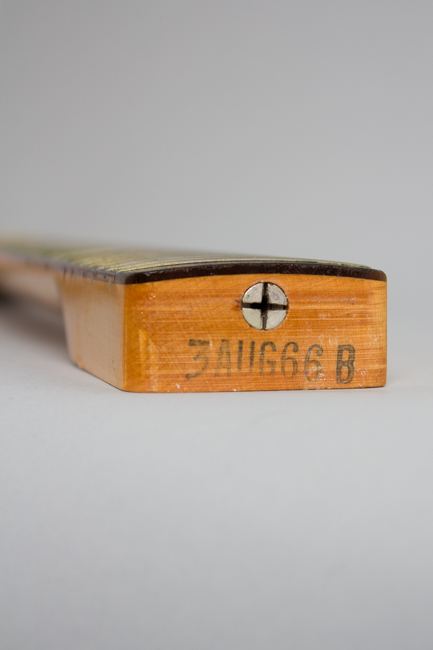 We've handled quite a few vintage Telecaster family instruments over the years but here's one we rarely see: a 1966 Fender Esquire. The "Esquire" name had been around since 1950, applied by 1951 to a single-pickup variation of the by then two-pickup Broadcaster/Telecaster. While classed as a separate model, the Esquire was built from all the same parts. This meant Fender sales could offer a slightly cheaper alternative for the buyer who couldn't quite spring for the Tele's original $189.50 pricetag.

Even many heavy-duty Fender fans don't realize how rare this unassuming-looking guitar really is. By 1966 the "plain Jane" budget Esquire was lost among the myriad of newer Fullerton models both more and less expensive (especially the two-pickup, vibrato equipped Mustang) and was only ordered in miniscule numbers. According to recently published information, all of 77 "standard" (blonde with a rosewood fingerboard) Esquires were shipped in 1966, compared to 3174 of the same style Telecasters!

This guitar is one of those few, and a superbly well-preserved one at that. The features are mostly identical to a period Telecaster, but of course with only that blank spot on the empty-looking pickguard where the neck pickup usually sits. The neck on this guitar is date stamped August 1966, and the pots carry codes from the 31st weeks of the same year.

The guitar shows a typical mix features for this period. The 3-layer white plastic pickguard is typical of 1966, as is the pearloid-dot inlaid rosewood fingerboard. The outdated script "Fender Esquire" logo decal on the headstock would be used well up into 1968, an indicator of the backlog of components in stock for this scarcely ordered model. The grainy ash body has a slightly yellowed coat of the typical 1960s "white-blonde", which is still semi-transparent. The neck is fairly slim with the standard round/flat 1960s Fender profile. The headstock carries the traditional clipped Kluson Deluxe tuners, replaced soon after by Fender's in-house "F" units.

The "Fender Patent" bridge unit carries three serrated saddle assemblies and a single staggered pole piece pickup. This is controlled by the standard Telecaster volume and tone knobs and 3-way switch with a "top hat" tip. Esquire wiring is unique in offering three tonal options on this one-pickup guitar: the #1 bass-heavy setting, the #2 with a normal tone control function, and the #3 "bypass" sending the signal straight to the jack. This last setting is the Esquire's secret bonus, offering some of the finest, snarliest tones ever to emerge from Fullerton.

This unassuming no-frills Esquire remains a fantastic example of stark Fender minimalism. At only 6.96 Lbs. (With the bridge cover ON!) this is one of the lightest, handiest vintage Tele-style guitars we have encountered. It is also fantastic sounding, especially for having just one pickup -- bright but not thin, twangy with bite and body. A Fender rarity that's also fun to play...and even to just hold! Here is simply a delightful mid-'60s Tele gem, from the final waning years of the Esquire and the end of the period where they really retain their Pre-CBS character before the F-tuners and heavier finishes arrive. It remains all original, still housed in its original black Tolex HSC.

This Esquire shows just some typical very light wear but remains 100% original, and overall quite nicely preserved. There are small dings and dents to the thin Fender blonde finish (mostly along the edges -- the Telecaster syndrome) with one slightly larger bash mark on the upper front edge in the armwear area. There are minor belt buckle marks into the finish on the back, but no serious loss. The headstock has light checking on both sides. The chrome plating shows only some very light wear; the "ashtray" bridge cover must have been fitted most of the time while the guitar was in use as the bridge pieces are hardly worn at all.

The original frets and the fingerboard show light wear as well in the lower positions but nothing that affects play. Internally this Esquire remains all original, with untouched solder joints and no wiring alterations. It has never been altered with a neck pickup as many have. The original black Tolex case has some light general wear externally but is also very clean for its age. All-in-all this is simply a wonderful and very rare Esquire; CBS era it's true, but the sound, the feel, and the vibe are all still the most basic and pure form of classic Fender nirvana. Twang it and be blessed! Excellent Condition.
×