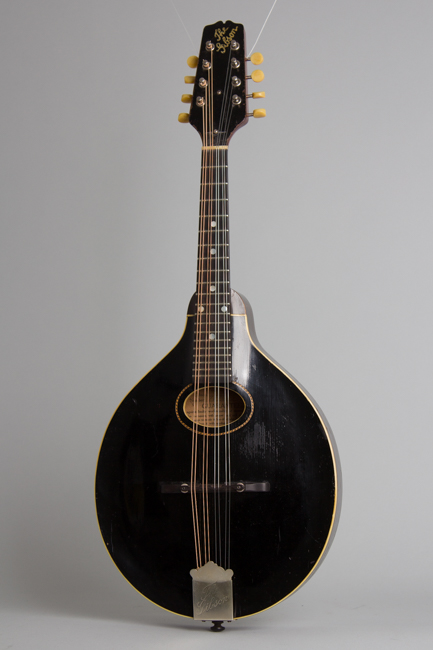 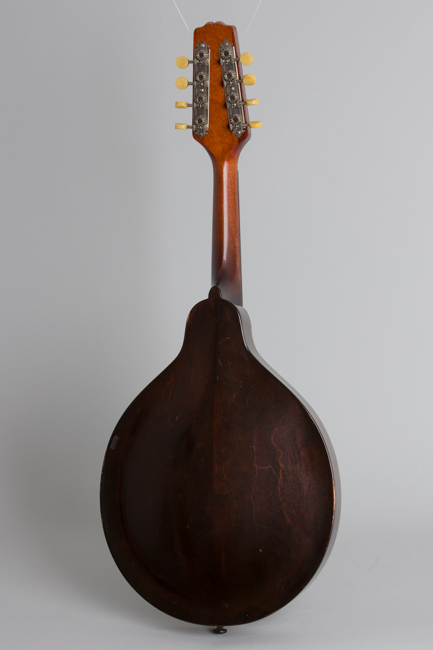 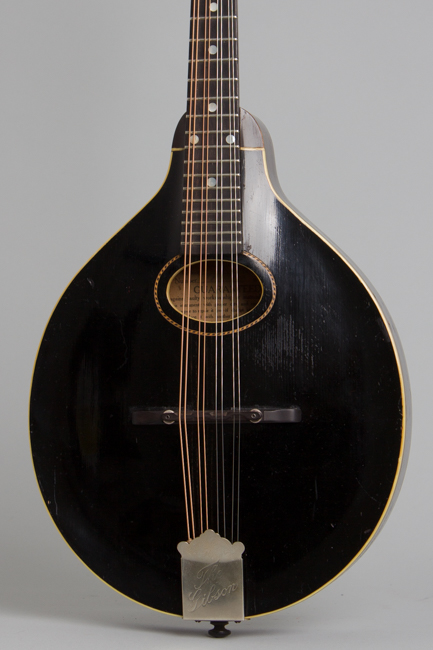 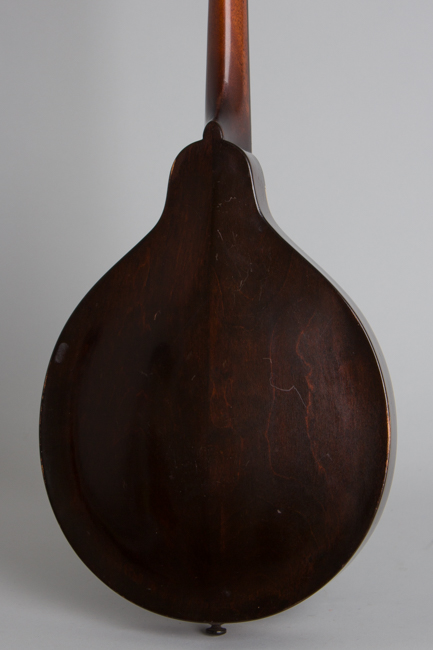 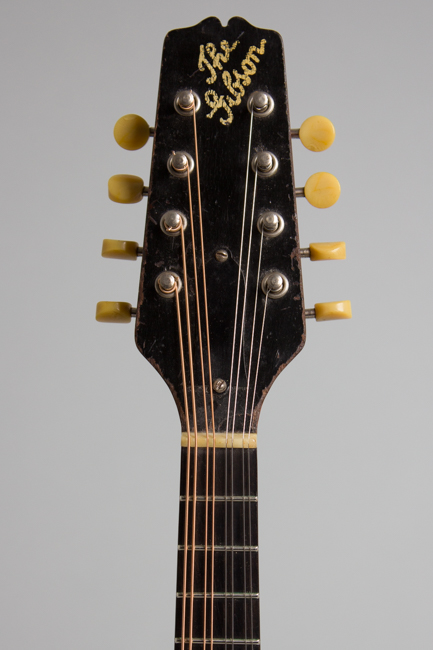 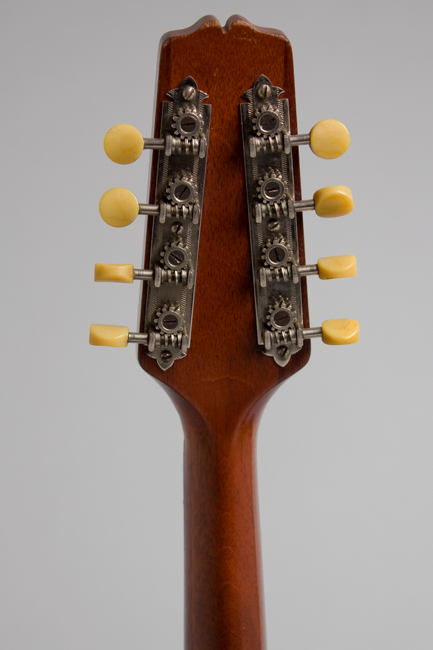 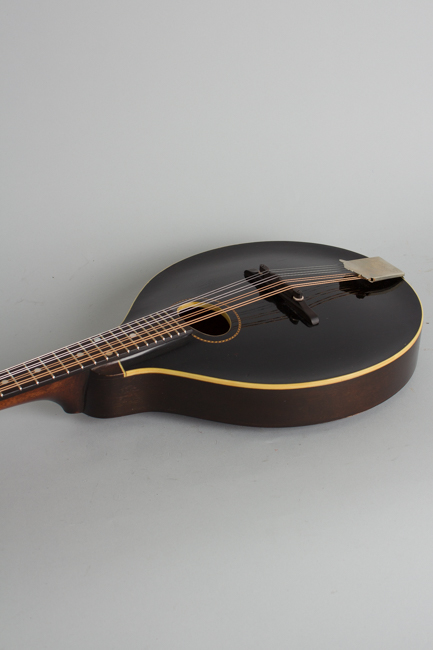 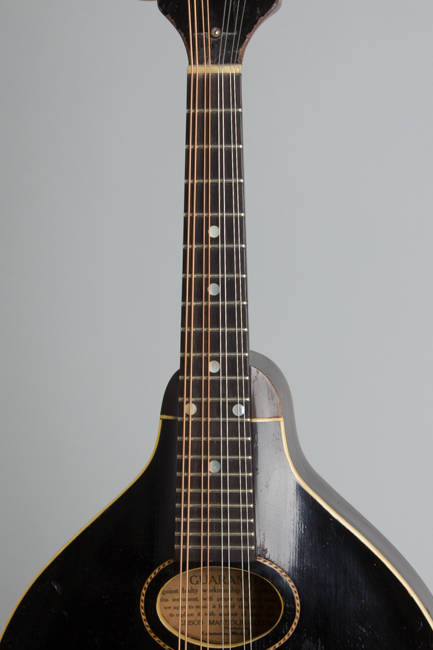 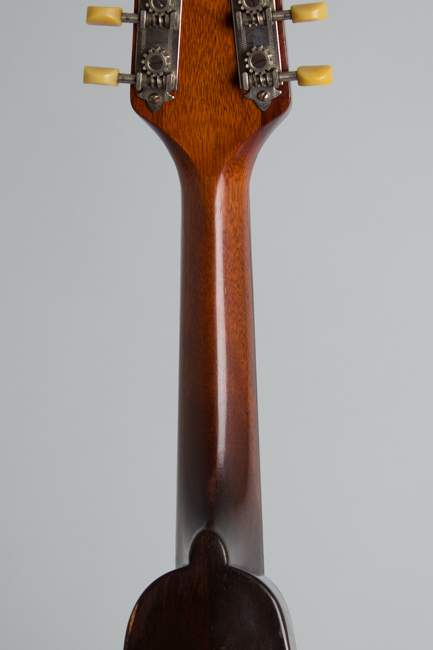 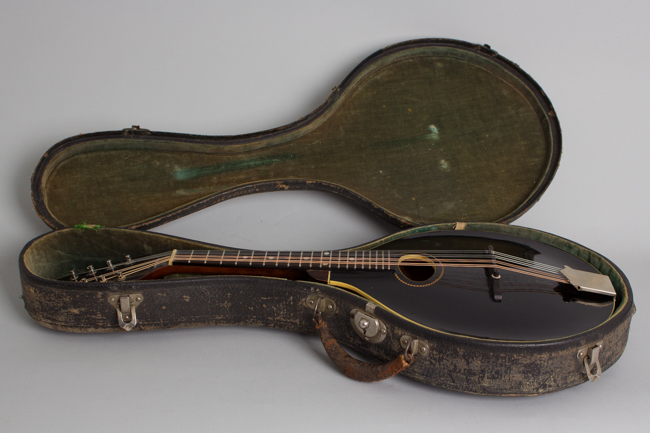 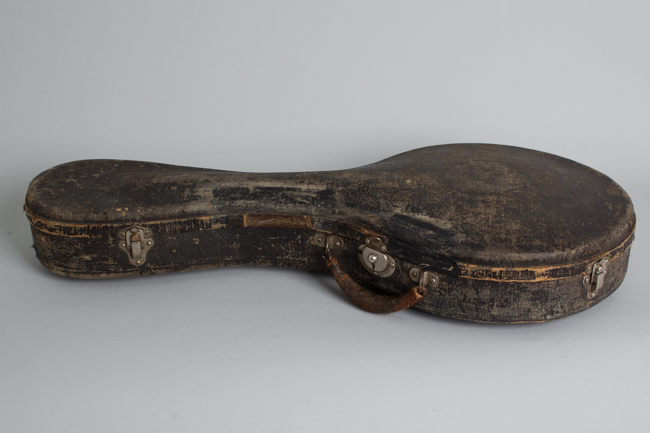 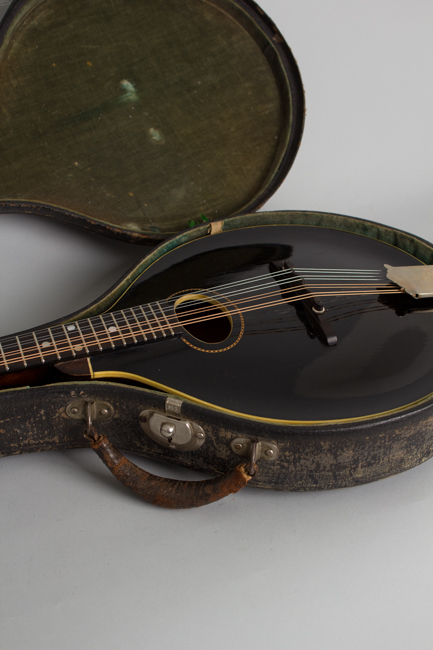 This is a great-playing and sounding, nicely preserved Style A-1 mandolin from early 1925, just at the end of the "Loar era" at Gibson. These "Snakeheads" are generally considered the best-sounding roundhole A style mandolins ever made, and this one certainly bears it out. This is a fine example of Gibson's craftsmanship at the apex of the mandolin era, just before the company's focus shifted to banjos and then guitars.

These "Snakehead" instruments are named for their Loar-designed peghead that angles inward towards the tip, a very logical design feature inexplicably abandoned by Gibson after he left. They are revered for their unmatched tone and projection and have other advanced features of the era including the adjustable truss rod neck, raised adjustable bridge and very slim neck profile. The top on this A-1 bears a striking black lacquer finish, bound in white celluloid with a thin double inlaid wood soundhole ring. The tailpiece has the engraved "The Gibson" cover plate and the tuners are Waverly strips with "arrow' ends. The slightly lumpy-looking stenciled "The Gibson" logo is a feature specific to this period.

Lloyd Loar's tenure as acoustic engineer at Gibson has become so mythical that sometimes separating fact from fiction is difficult. Certainly the mandolin family instruments made during the period of his employment are the most perfectly realized in Gibson's history, and have become the template for most similar instruments since. Mandolins in particular of the "Loar era" show the influence of a master player on both design and execution, although other Gibson employees (especially Thaddeus McHugh and Lewis A. Williams) actually engineered many of the technical improvements of the early 1920's. Loar was primarily concerned with 'voicing' the instruments properly; the Master Model Style 5 line was his greatest contribution with their violin-style F-hole tops, but all Gibson mandolin family instruments were refined at the same time. Even this basic "A" model has sonic and playing improvements benefitting from "Master Loar's" input that are still evident today, nearly 100 years on. These distinctive "Loar era" A mandolins have become ever more sought-after by discerning players.

This is a very good playing and sounding "snakehead", with some wear but remaining mostly original except for a well-done refret. The finish appears unaltered original; polished out long ago perhaps but with no added lacquer or other overspray. It shows dings, scrapes and dents overall with a spot of pickwear below the soundhole. The pickguard looks to have been removed long ago, hence this particular wear pattern!

All seams are solid and there are no visible repairs to the wood except a small chip on the headstock just above the nut that has been reglued. The tuners, tailpiece and cover are original; the adjustable bridge is a high quality repro and as noted the pickguard and bracket are missing. The frets are larger than 1920's Gibson spec and play very well, showing only some very minor wear. The mandolin plays very great, sounds spectacular, and still resides in its original HSC. This is a good gigging "snakehead", not pristine but definitely ready to go! Excellent - Condition.
×