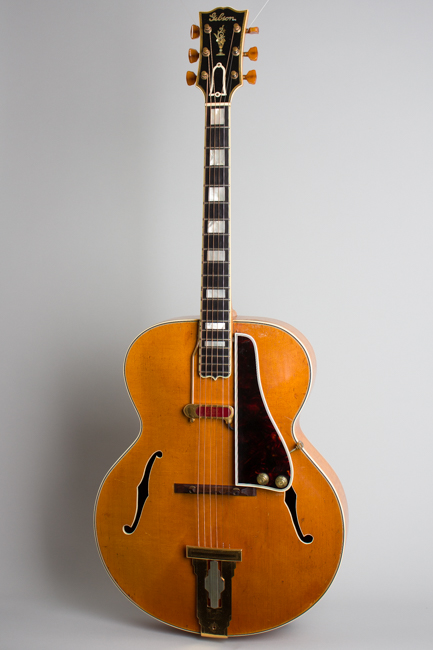 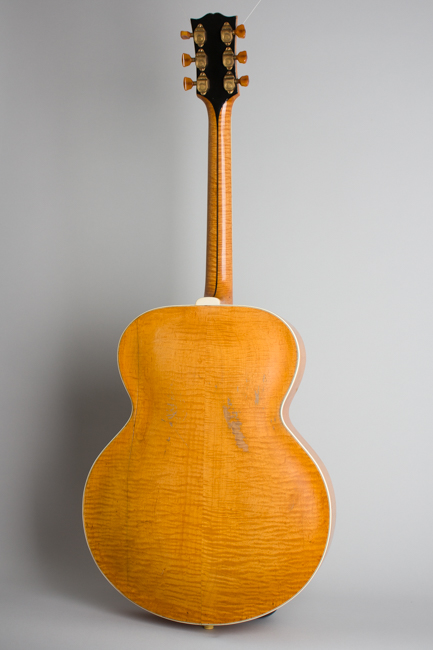 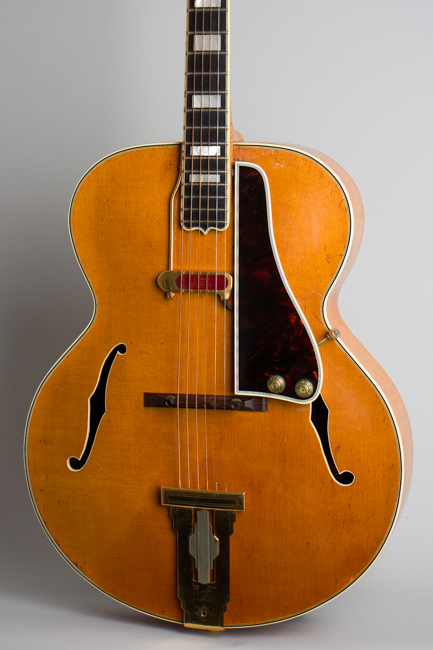 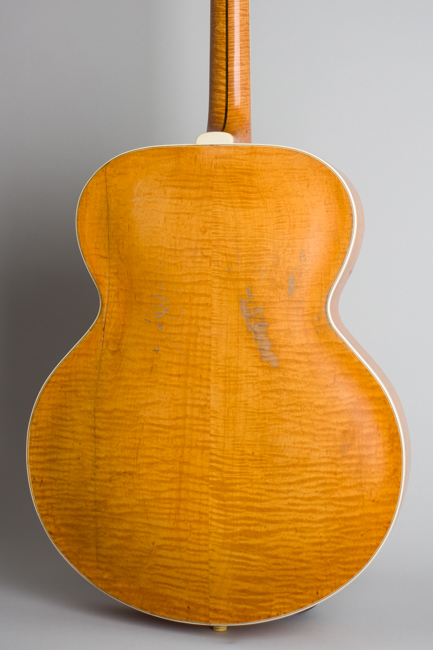 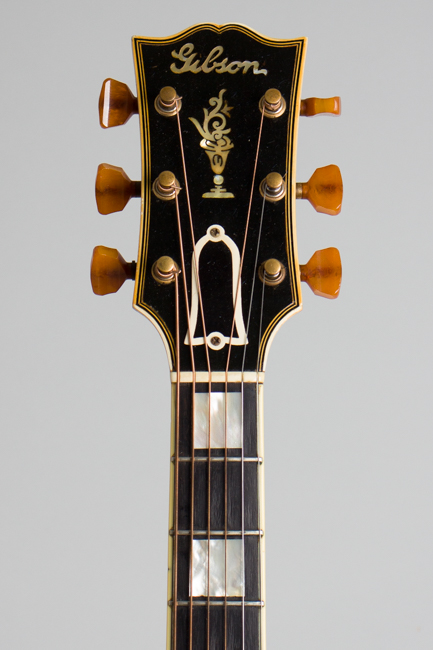 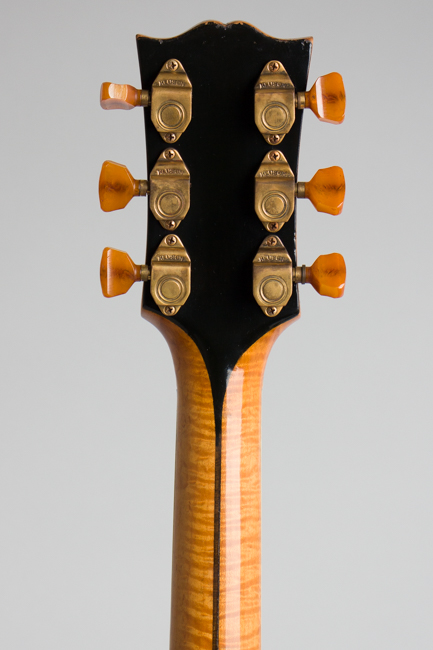 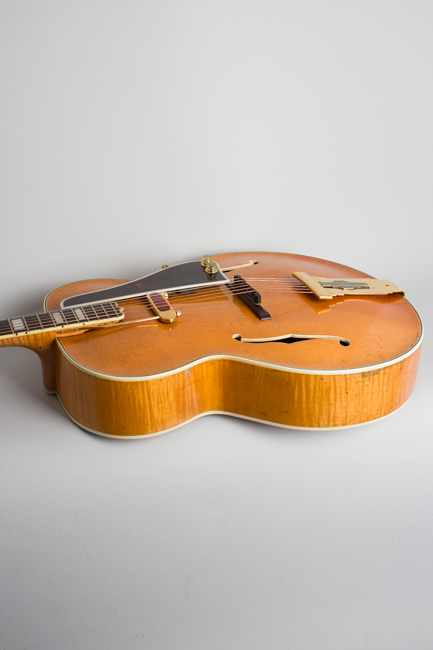 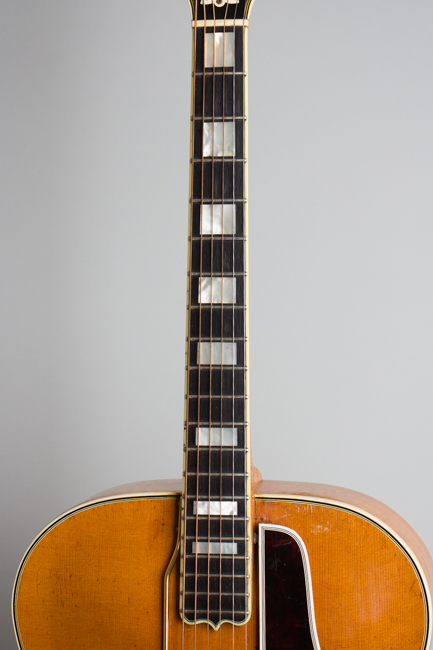 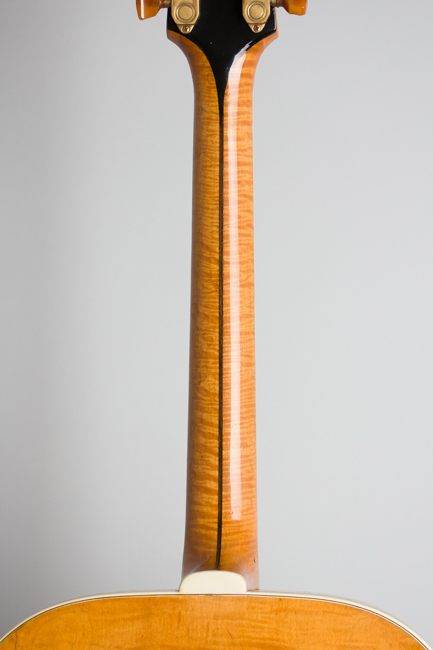 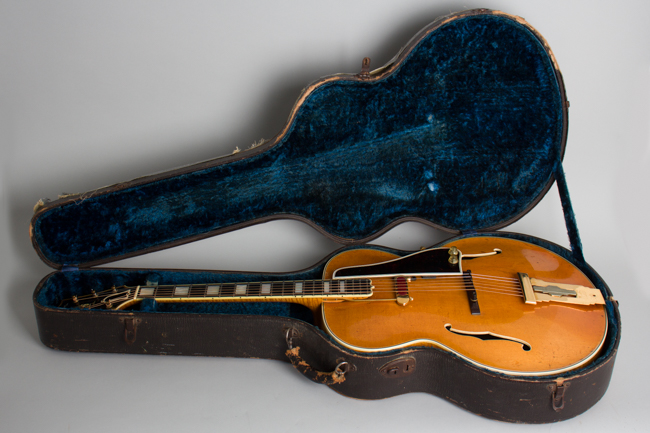 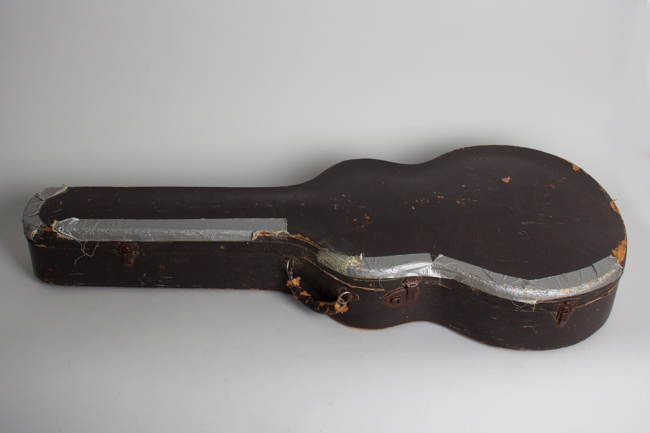 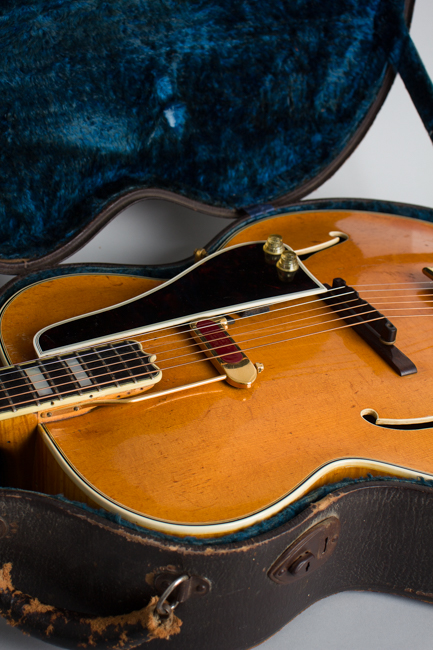 This is a really cool swing era Gibson L-5 with an interesting history, and a very fine guitar to boot! It has an early Gibson factory refinish from sunburst to the newly-fashionable natural, done soon after it was completed and documented in the company's shipping records. It appears to have belonged for a time to Frank Victor, a noted player/arranger for "Plectrum guitar" at the time and an important if now largely forgotten swing-era guitarist. In the 1930s Victor played with, among others Joe Venuti, Eddie Lang and Adrian Rollini but is most remembered for the various guitar pieces he wrote and arranged, often in collaboration with Harry Volpe. The pair recorded some early plectrum guitar duets for Decca in 1936 which are connoisseur's delights today.

The instrument is one of only a relative handful of blonde L-5s in circulation before WWII, although technically it did not start out that way! The factory order number of 46 D-1 stamped under the treble side F-hole indicates construction began very early in 1938, probably the first week or so. It would have been completed with a sunburst finish at the time; the natural option was not yet officially offered. Gibson's records note it as first shipped out Monday, October 10 1938 to New York Band instrument, Gibson's foremost Distributors in the NY City area.

It was returned to Gibson the next year to be refinished in natural, and was shipped out September 13th 1939 to Frank Victor, notated as "L-5 Natural". It is possible that NY Band sold it to him with the proviso it would be delivered as a blonde, the hot new look of the time! The next year the guitar was again returned to Gibson again for an unspecified repair, then shipped back out to F. Victor on November 5th 1940. After that it disappears form the company's records. The instrument shows signs of long use afterwards, either by Mr. Victor (who died in 1970) or subsequent owners.

The guitar itself is a nice example of a very rare L-5 configuration, an early "Advanced" 17" model with the X-braced top specific to those combined with a factory natural finish. These two features are rarely found on the same instrument. The tuners and tailpiece are correct for a 1939-40 guitar, so it is likely they were installed when the guitar was finished out after its blonde makeover. Typical swing era L-5 features include multiple binding on all edges, single bound F-holes, a pearl block inlaid ebony fingerboard and slim round-backed 3-piece neck. All the maple used on this guitar has a lovely flame figure, possibly why it was originally chosen for the natural finish overhaul.

The guitar currently mounts a c. 1960 DeArmond Model 1000 Rhythm Chief pickup, bracketed to the fingerboard with the controls mounted to the pickguard. There are no additional holes in the instrument, and it can be played equally well as a straight acoustic or amplified. It is possible Frank Victor made this addition, but there is no information on his ownership or use of the guitar after 1940. The provenance described above is detailed in a recent appraisal by Gruhn & Spann, who have access to the original Gibson shipping records. This is a well-worn but lovely and in its own way historic L-5.

Overall length is 41 3/4 in. (106 cm.), 17 in. (43.2 cm.) wide at lower bout, and 3 7/16 in. (8.7 cm.) in depth at side, taken at the end block. Scale length is 25 1/2 in. (648 mm.). Width of nut is 1 11/16 in. (43 mm.).
This possibly unique pre-war L-5 remains nicely original overall showing signs of decades of professional use but an excellent playing guitar. This was definitely someone's gigging instrument; the finish shows wear overall with dings, dents and scrapes over most areas and some larger spots worn fully through to the wood on the back. There are a recognizable scars on the top from a floating DeArmond control box mounted previously.

there is one long grain crack on the treble side of the back, running the entire length of the instrument. This is solidly sealed but visible. There are strap button holes in different locations around the neck heel, the treble side, bass side and on the rim just above. Any/all of these can be used or filled as desired. The heel and back of the neck have an old clear lacquer overspray, otherwise the finish appears to be the original 1939 Gibson job. The center seam on the back of the neck shows some finish flaking, but is not open.

The guitar was refretted long ago with wire larger than the original but not out of character for the instrument. There is some subsequent wear but nothing that inhibits play. The hardware appears original; the L-5 tailpiece and Kluson Sealfast tuners were probably fitted during the 1939 refit as they are correct for that year. The tailpiece was probably replated long ago. The pickguard appears original but has been remounted spaced mounted slightly out to the treble side, to allow it to remain uncut with the DeArmond pickup properly positioned. The controls for the pickup and mini-jack are mounted to the back edge of the pickguard, with small holes drilled for the mini-pots.

This is a very fine playing guitar, obviously a processional's choice for many years of gigging. The neck angle is excellent and the action can be raised or lowered as desired. With the excellent sounding DeArmond pickup this is a fine electric jazz box, played acoustically it remains a beautiful swing-rea masterpiece. It is housed in a period HSC that looks to have been with the instrument for many decades. Overall Very Good + Condition.
×