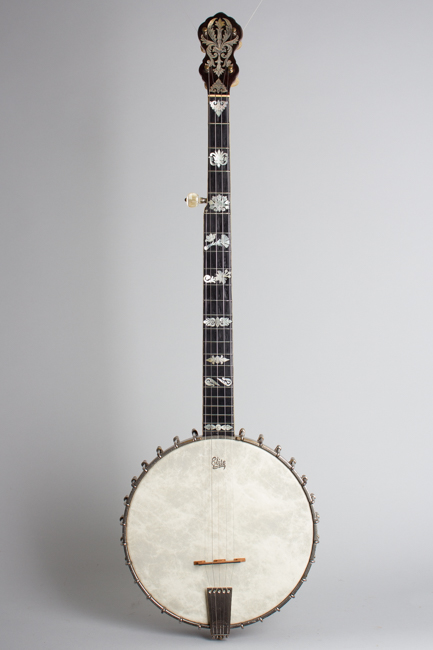 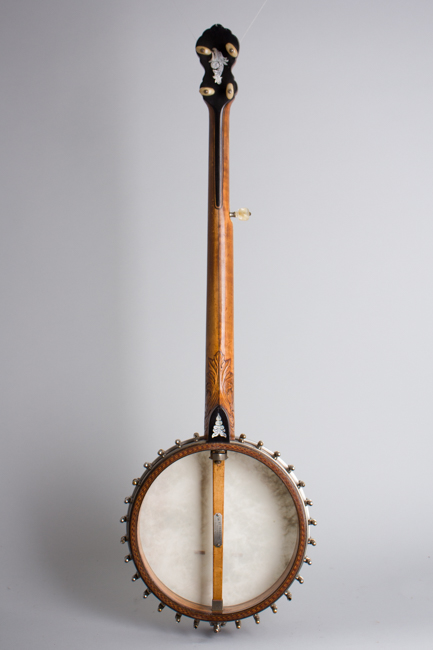 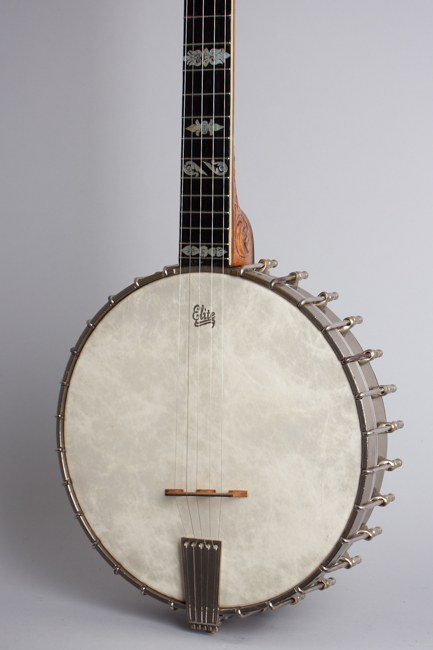 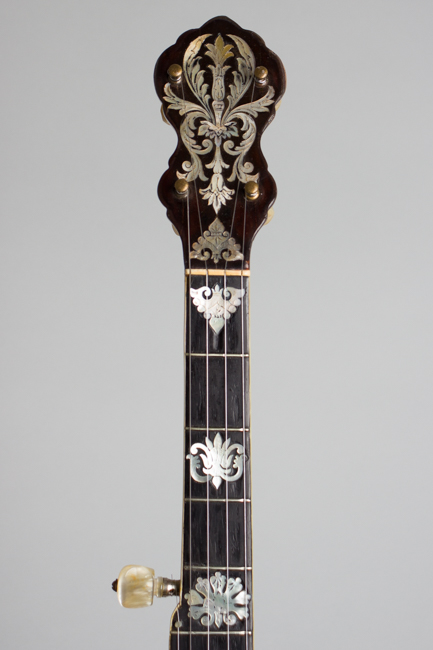 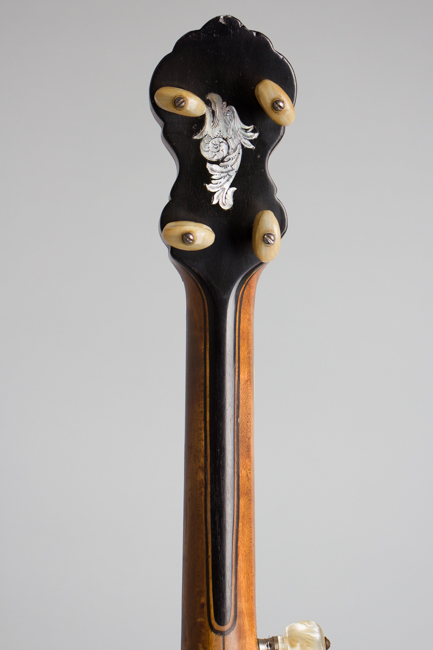 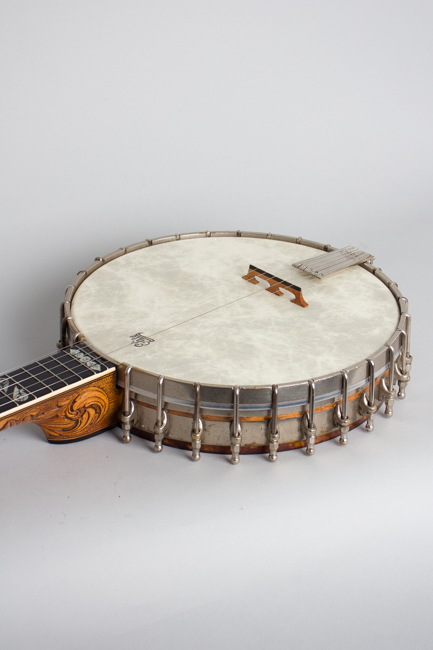 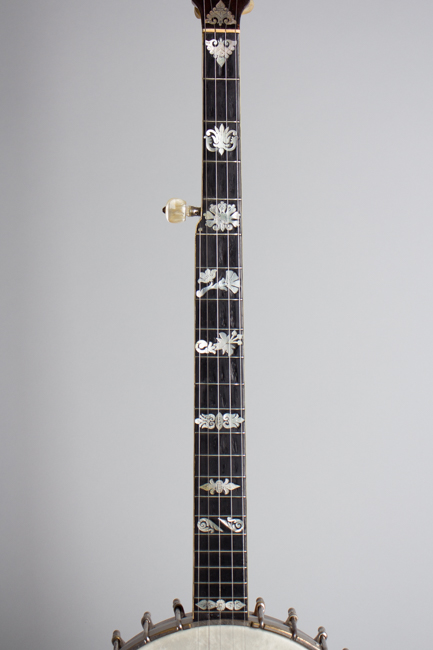 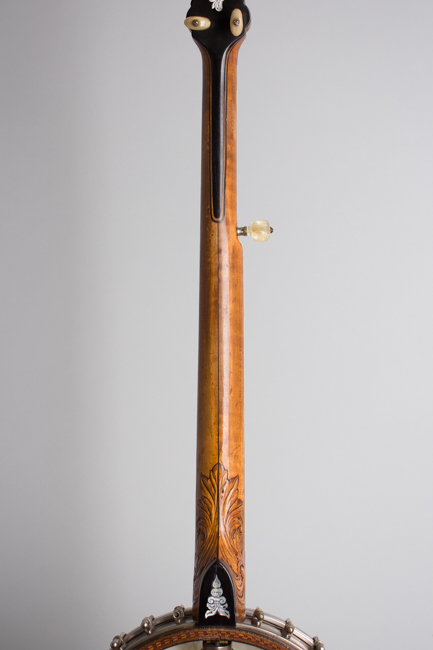 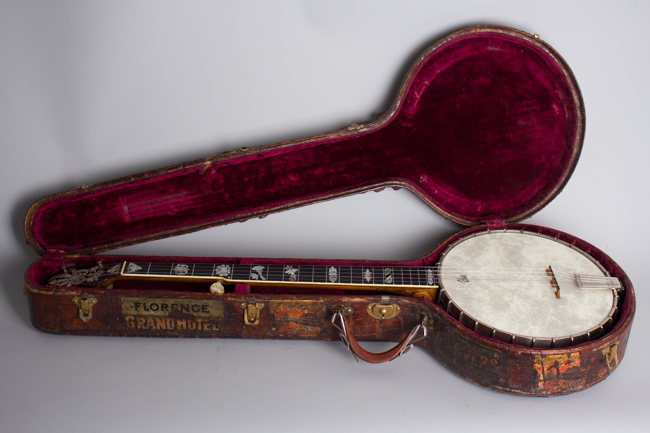 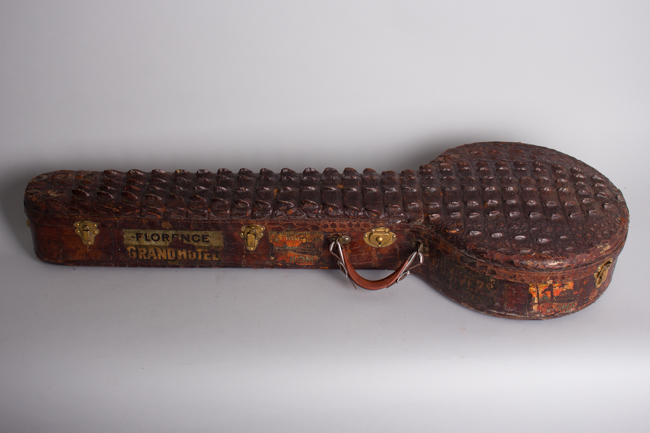 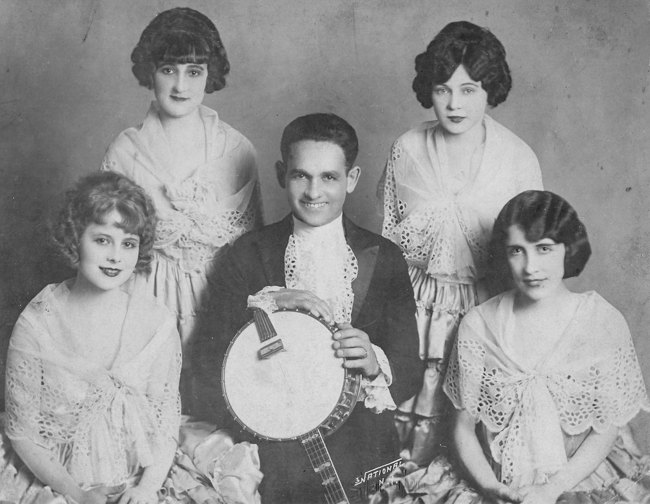 This banjo is a very well-traveled example of one of the most desired of all openback 5-strings, the Fairbanks Whyte Laydie #7. This 1909 instrument was a longstanding performance banjo for one Otis Mitchell, a somewhat celebrated Vaudeville performer active in the 1910s and '20s. Mitchell was a longstanding Vega Endorser, appearing in ads for the company as early as 1914 up through the later 1920s. At some point he commissioned a truly spectacular traveling case for the instrument, not just alligator-grained but fashioned them the hide of an actual alligator, and a grown one at that!

While Otis Mitchell does not appear to have recorded, he was busy for years as a performer notably on the Keith-Albee Vaudeville circuit. He traveled the world singing, telling stories and playing the banjo, performing in 1921 as far-off as Australia and New Zealand. This was reviewed thus: "Otis Mitchell, fresh from the United States, impresses one by his breeziness, and also by his ability on the banjo. He tells a number of stories that got over very nicely, but his musical interpolations were the more generally successful".

He was somewhat unusual by the later 1920s for sticking to the "old fashiooned" 5-string banjo instead of adopting the tenor or plectrum. This may have had something to do with the nature of his act, described in a Vega promotion as a "Colonial Period Vaudeville Offering" in which he sang and accompanied four young ladies "dressed according to the stately dictates of the Colonial period". Another billing was "Otis Mitchell and Maryland singers" described as "Singing Southern Songs of the Sixties"; the 1860s that is. He also toured with a group called the Reiman sisters, one of whom (Desmonda) he married in 1927. He at least once played (apparently solo) on the White Star liner the Queen Mary, described there as "Wizard of the banjo".

This Whyte Laydie #7 was Mitchell's primary instrument by the 1920s at the latest, he is pictured with it in several photos of the period. This was the highest grade cataloged Whyte Laydie model, an exceptionally beautiful banjo for the eyes as well as the ears! "The Vega banjo is used by Mr. Mitchell in the act and its beauty of tone adds much to the artistic presentation" noted Vega in a promotional feature on him. He appears to have only played high-end Vega banjos

This #7 is built on a just-under 11" diameter rim with a 27" scale neck, one of the standard patterns. It features the elaborate early Fairbanks trademark hand-engraved pearl inlay on the headstock and bound fingerboard. The headstock face has an intricate scrolled pearl floral pattern while the famous "gryphon" ornaments the rear. The heel is elaborately carved in a floral pattern with a pearl-inlaid laminated ebony heelcap.

The rim is equipped with Fairbanks' patented bracket band with the shoes are mounted to that, not drilled through. It is topped with the "Electric" tone ring that was the finest of its time and still a standard fitting today, over 125 years since its invention. The lower edges are capped with tortoise celluloid with elaborate herringbone marquetry along the bottom. The tailpiece is an original period Kershner Unique and the original friction tuners are fitted with genuine pearl buttons.

The world-beating Fairbanks models of this era were mostly the brainchild of David L. Day, chief engineer at Fairbanks/Vega and arguably the most important (if unsung) banjo designer of all time. His many instrument innovations set the pattern for what is now considered the traditional openback banjo and have been widely copied for decades, yet few players even know his name. No matter, even 110+ years on this special Whyte Laydie #7 remains a glowing testament to the artistry of its designers and builders, and the man who played it for much of an eventful career. This instrument justifies its longstanding reputation as one of the finest banjos ever made, continuing to produce a wonderful sound that few other banjos, new or old, can match.

This banjo is in well-used but also well cared for original condition, showing the sort of general wear one would expect in a long-serving performance instrument that is well over 110 years old. The finish has had a clear overcoat added, probably 80+ years ago. This has ambered very nicely but the neck finish in particular feels a bit thicker than the very thin original varnish, and even this is heavily wore through from play along much of the spine.

The original plating shows wear including some loss and many small dings and dents over the rim and hoop. The hooks, shoes and nuts show loss to the plating, though far from completely. The hooks all appear period; most still have the original closed ball-end nuts though 6 are slightly later open ball style, probably procured in the 1920s. The hardware is for the most part original, notably the pearl button friction tuners which amazingly were never switched out for geared pegs in the '20s. The 5th string tuner shaft is the correct period style but a replacement; the button is pearloid plastic but a decent match visually to the original which are genuine pearls. The Fairbanks name plate is on the dowel a reproduction

The banjo is fitted with an original 9and very rare) correct 5-string Kersher unique tailpiece, as Mr. Mitchell is pictured with in the 1920s. He fitted some sort of simple resonator for a time; that is long gone. The small-wire frets are original, they may have been worked on a bit in the past and show a decent amount of wear. The very dense ebony fingerboard shows quite a bit of wear as do the engraved inlays. This banjo was played a LOT, and unusually Mitchell seems to have spent a lot of time around the center of the neck, not as much down by the nit as is common with openbacks. The often fragile original thin ivoroid binding is fully intact on the treble side, the bass side looks rebound long ago with an area patched in by the 5th string peg.

This banjo is still an excellent player, set up with steel strings, an Elite brand Fiberskyn style head and an older bridge. The absolutely fantastic sound these are known for is provided in abundance; this smaller rim banjo has a bit more cut than the larger-rim versions but retains an overriding even and full bodied tone. It is certainly playable as it stands, if this instrument were to be used heavily going forward a refret would be in order for many players, which can be arranged.

This banjo is housed in the most fantastic vintage period case we have ever seen, made from the actual hide of an alligator. We have had many "gator cases", but never one made from the real thing! This obviously expensive and extravagantly showy custom made case was likely carted around quite a bit during Mr. Mitchell's travels, festooned with vintage travel stickers mostly documenting hotels in Italy. This banjo has as much Mojo as anyone could wish, played on stages all over the world back when that meant traveling by steamships and railroads. A small booklet of original clippings and photos documenting Otis Mitchell's career is included. Very Good + Condition.
×