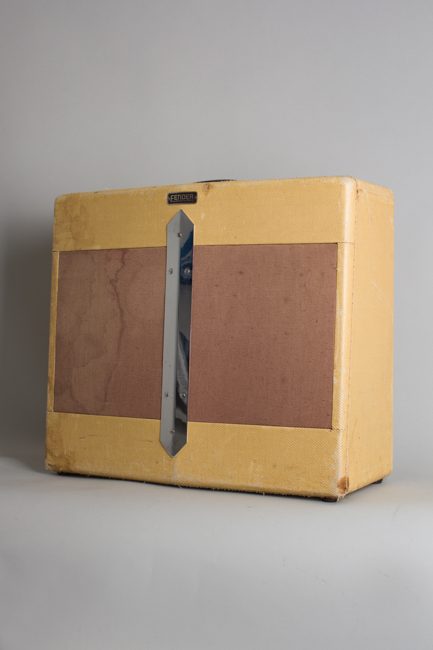 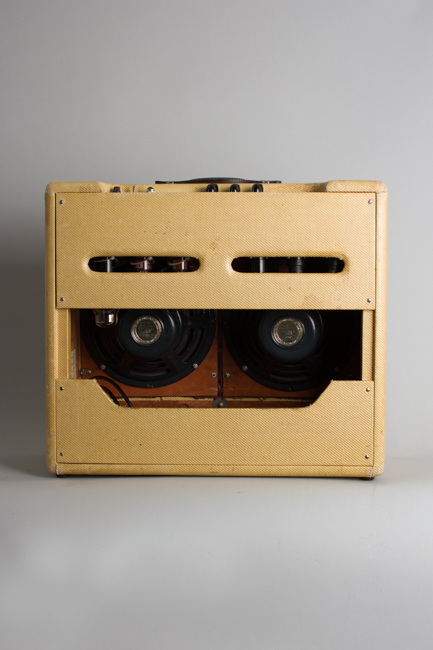 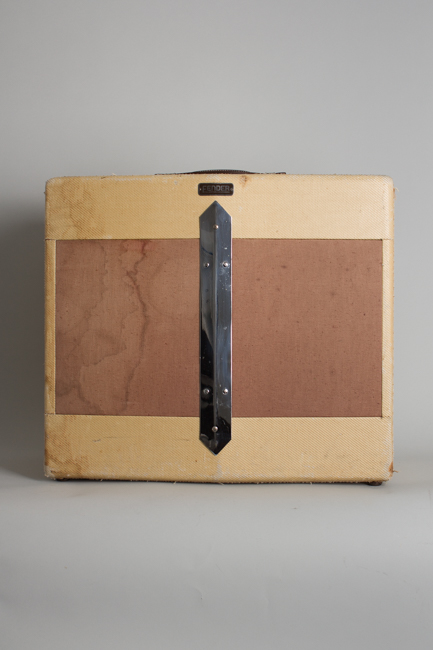 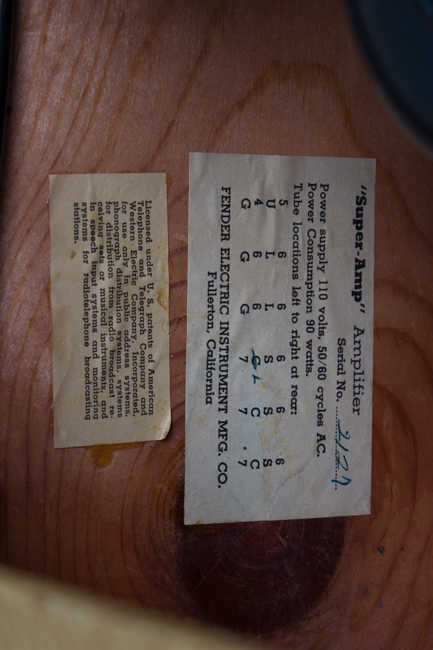 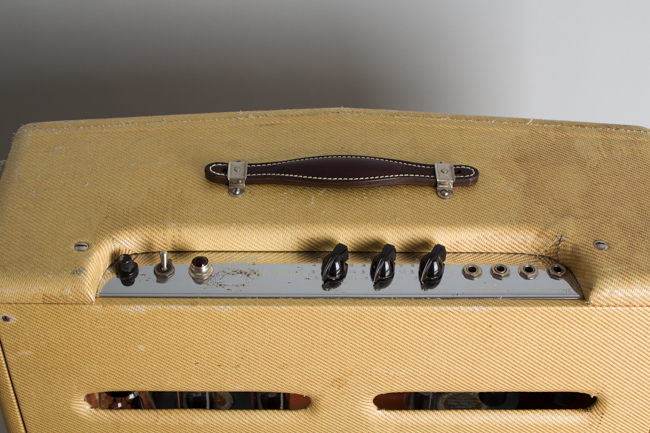 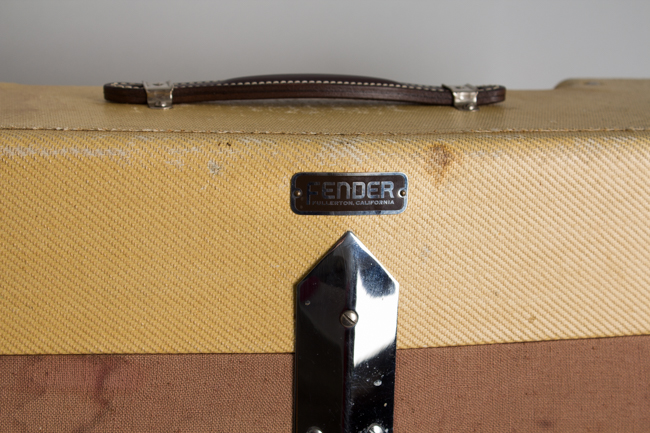 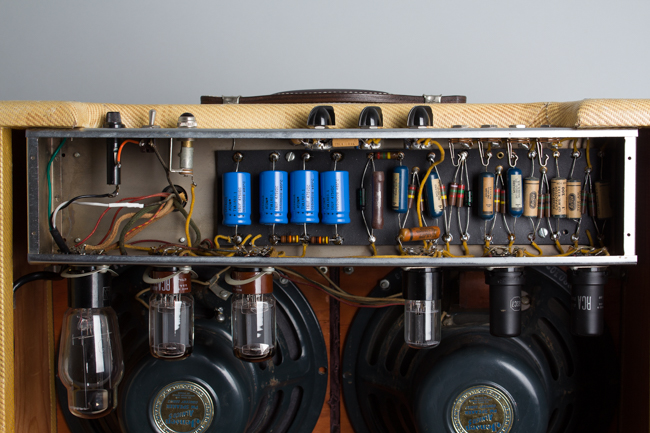 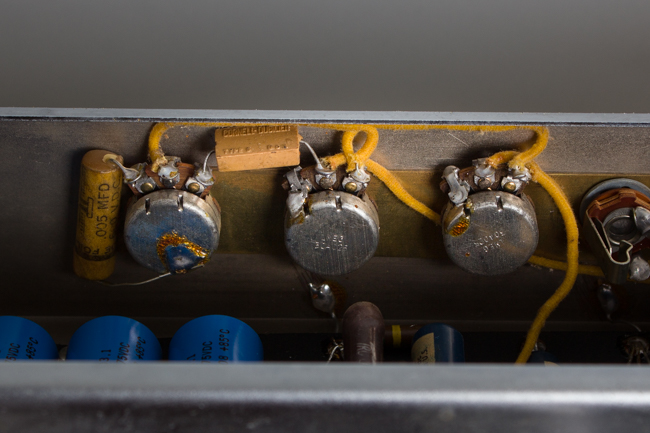 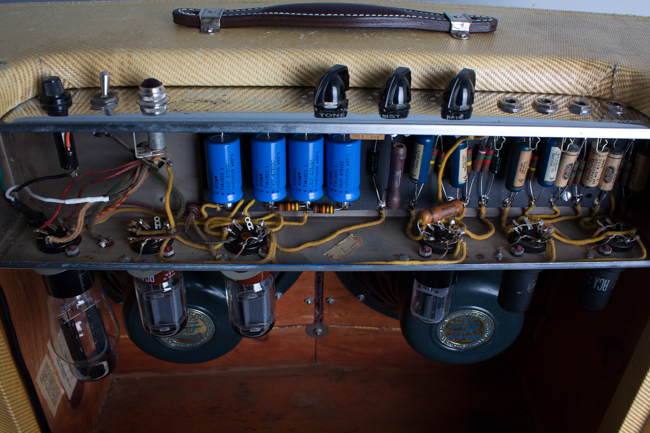 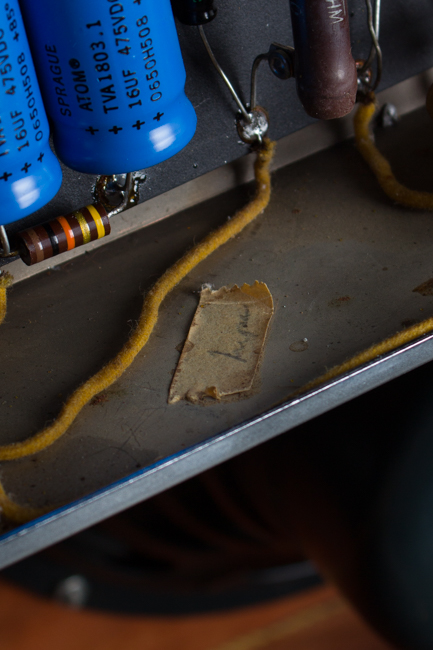 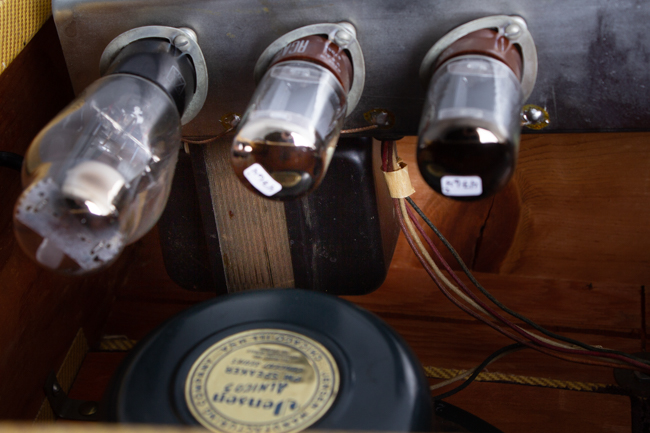 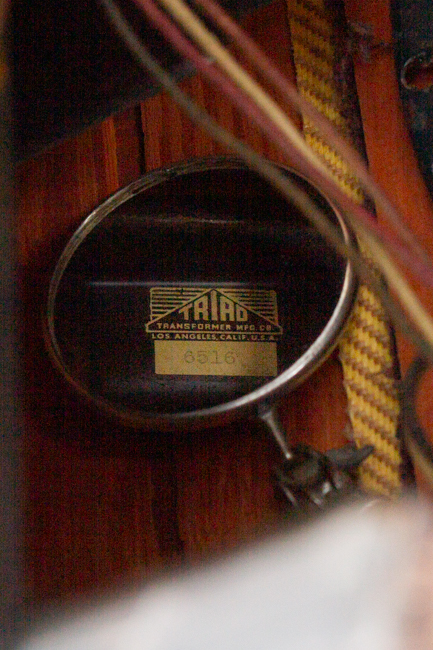 This revolutionary double speaker combo amplifier was one of Leo Fender's earliest and most important creations, and changed the world of instrument amplification (for the louder!) forever. Released in late 1946 initially named the "Dual Professional" this model followed the beautiful but fairly crude holy trinity of "Woodies", Fender's first full-production amplifiers. The twin 10" speakers, covered finger-jointed pine cabinet, eyelet board, on/off switch and jewel light were all firsts for the company's line-up that would set the pattern for future Fender product and up the ante on competitors. By late 1947, this model was re-named the "Super-Amp" and the covering was changed to a diagonal tweed fabric that became the staple look of Fender amplifiers throughout the next decade. The Super is said to have been Leo's personal favorite amp and the circuit he would most frequently tinker with in pursuit of tonal perfection.

The distinguishing feature of these early Supers is the angled front cabinet with a chrome-plated metal stringer in the center, popularly known as the "V-Front". The metal strip connects two separate speaker baffles, each holding a 10 inch speaker. Due to the relative complexity of the design, Fender outsourced the cabinets for this model before moving to the simpler single-baffle design built in-house. Interestingly, this design overall bears a closer visual resemblance to the subsequent Wide-panel models than its TV-Front contemporaries.

The V-Front Super was in production from 1947 until 1952 and as Leo upgraded the design it spanned 5A4, 5B4 and 5C4 circuit designations, the latter two bleeding into the Wide-panel era. This, the 5B4 circuit, uses two 6SC7 preamp tubes and one 6SL7 phase inverter. The "B" revision also sports four inputs rather than the earlier three. V-Fronts like this are quite rare - mostly because Fender didn't make many of them in the first place. It was an expensive professional-grade amplifier in 1951, and much of Fender's business was still in student steel guitar rigs.

The tube chart is too early to bear a date stamp but the two original Jensen P10R speakers date to the 50th week of 1950 and 2nd week of 1951, respectively. The legible pot codes all date to the 25th week of 1950, so this amp was likely assembled in early 1951. Although the Pro model was technically above it in the line, many players preferred the Super's twin-ten layout to that model's single larger speaker. By 1951 Leo's designs were changing the world of electrified music forever and this amplifier was the spearhead of the Fender revolution.

Externally, this amp is in great shape for being nearly 71 years old. The finger-jointed pine cabinet still sports its original low-contrast tweed, which is in very good cosmetic condition considering its age and fragility. The brown linen speaker cloth remains fairly taught and mostly unblemished, except for some staining on the right side. This was possibly the result of some studio coffee spilled from the top of the amp, as staining is also present on the tweed areas above. The chrome-plated control panel is shiny and in great condition save for a few minor scuffs; practically all the stenciled lettering is intact. The handle is a high quality replacement courtesy of Bob Brookwood of Brookwood Leather, our favorite current maker of reproduction leather handles.

Electrically, this V-Front Super is nicely original. Both speakers are original to the amp and sound great. The output transformer mounted on the right speaker basket reads 1248 and the power transformer 6156, both made by Triad and original to the amp. The amp has received our typical maintenance servicing, including replacement of all electrolytics, a 3-prong grounded power cord, cleaning of all sockets, pots and jacks and biased to spec. The amp has otherwise a mixture of older original "firecracker" Astron and later 60's blue Astron coupling caps, all of which test and sound great, hence we left them in to sensibly conserve as much as possible of the amp's history. The Super sports a great set of vintage RCA tubes, including a "big bottle" 5U4 rectifier, two 6L6 power tubes and the aforementioned two 6SC7 preamp tubes and 6SL7 phase inverter.

Tone-maestro Billy Gibbons is known to often enjoy the velvety yet still raucous overdrive offered by these amps, and can famously be heard using one all over the '94 ZZ Top record "Antenna". This rare early Fender creation is a truly phenomenal sounding amp and the first V-Front we have the honor of featuring in our showroom! Overall Excellent Condition.
×