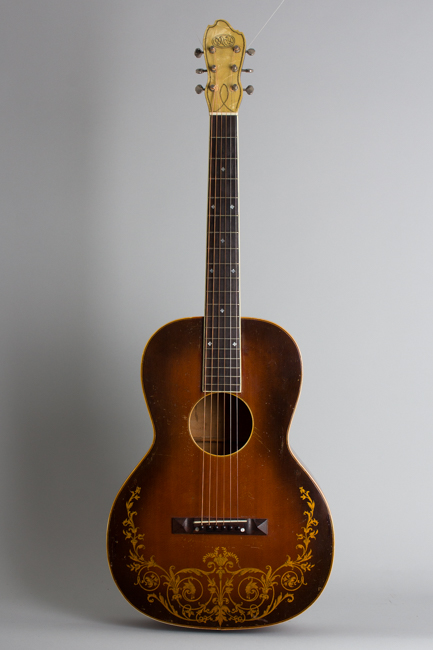 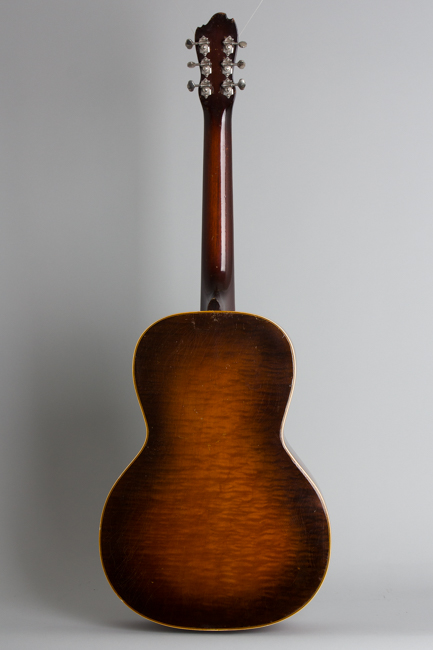 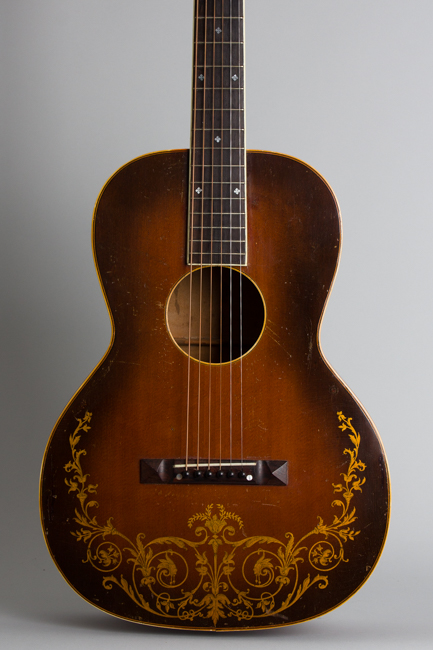 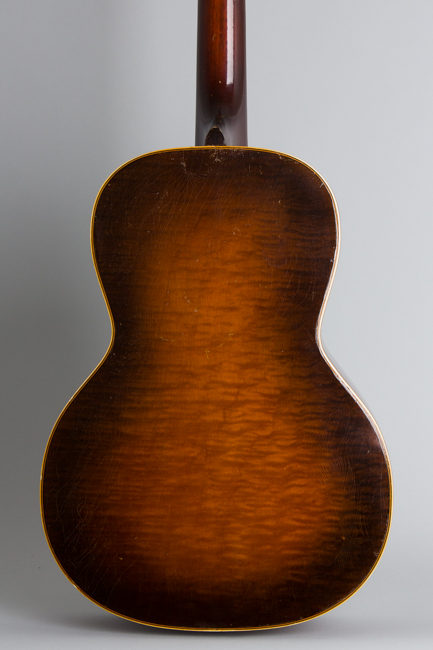 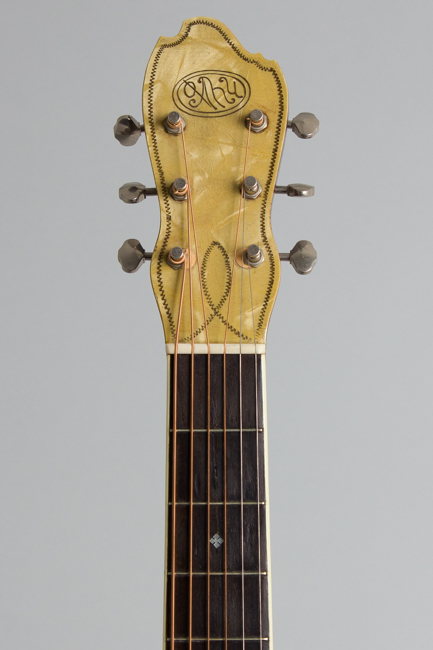 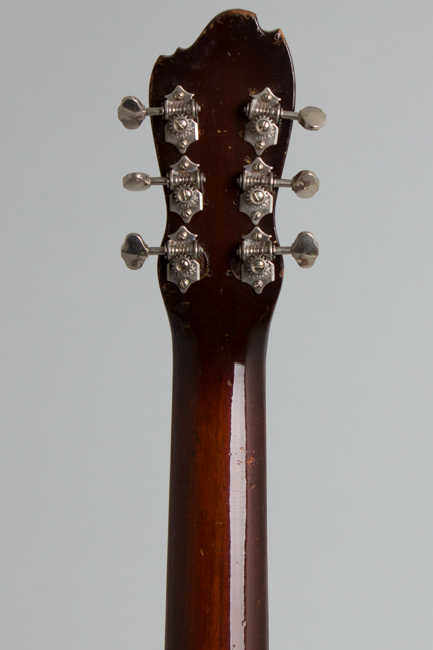 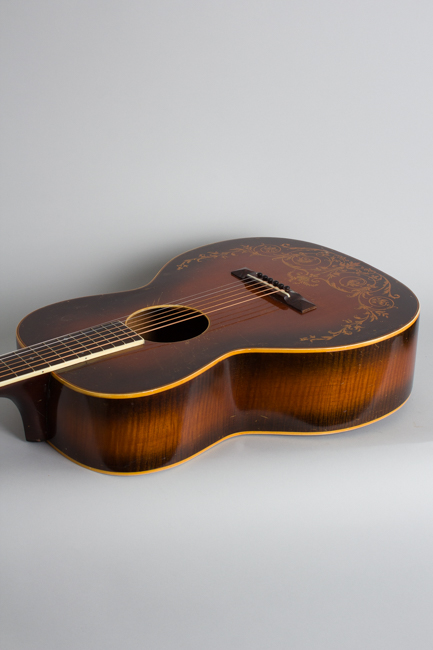 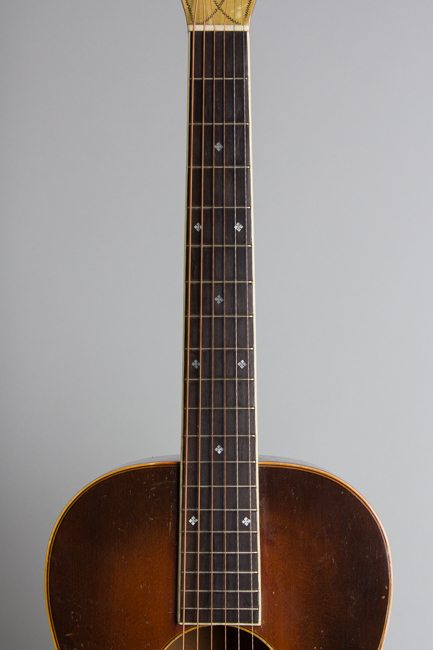 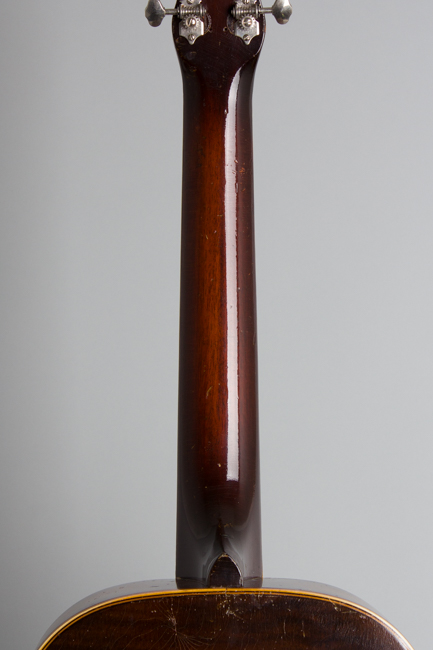 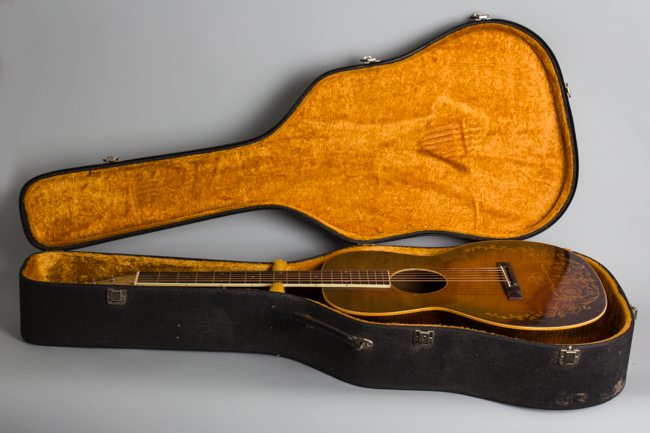 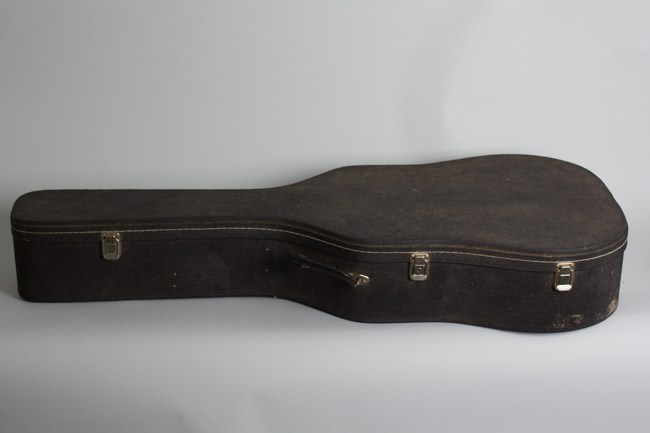 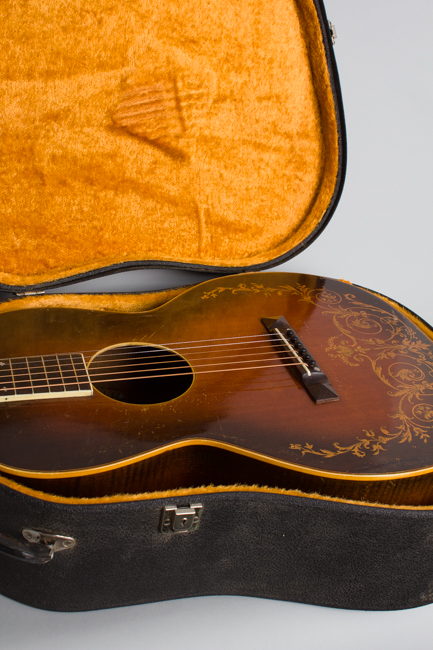 This Oahu-branded Jumbo guitar is a very rare variation of this offbeat Chicago classic, the earliest deep body model with a long-scale neck and an X-braced top. This is a far superior instrument to the more common later larger-bodied straight-braced version. Additionally, this instrument appears to have been built as a Spanish or "standard' model from the outset; most of these were originally sold as Hawaiian guitars. The neck has been reset but never shaved down or refinished, as squareneck models need to be. This early version is also distinguished by the etched pearloid peghead covering in the "Kay Kraft" style shape. And if all this wasn't enough, this guitar was for some time a personal instrument of New York's protean guitar maven Mark Ribot.

The Cleveland-based Oahu company (as the name would imply) specialized in teaching Hawaiian guitar and operated a chain of franchised studios across the country. The great bulk of their business was printed lessons but they also offered the guitars to play them on, usually on a time payment plan. The great majority of instruments made for them were sold as Hawaiian guitars; this Spanish style was ordered in far smaller numbers. This is one of the earliest first-generation Oahu Jumbos we have seen, the company's top-line instrument in 1935-6. This version was only available for a couple of years in the mid-1930s before being replaced by a larger but less sonically attractive Jumbo model.

The thin X-braced spruce top is solid spruce; the back is laminated maple, the sides appear to be solid maple, or if laminated the grain on the inside and outside plys is very well matched! This guitar would have been originally sold through Oahu's chain of teaching studios for a whopping $98.00, quite a sum in the mid-1930s even sold on time. It was aggressively touted as a fully professional grade instrument and for that price, it ought to be -- other guitars priced in the same range included the then-new Martin D-28!

The original Spanish neck on this model has 12 frets to the body with a fairly flat rounded contour, topped with a bound rosewood fingerboard with pearl slotted diamond inlay. This neck is considerably slimmer back-to-front than the square Hawaiian version and of course more comfortable to play, unless the conversion included heavily re-carving it. The dark sunburst spruce top has thick triple binding and an elaborate gold scroll decoration stenciled on the lower area, with the back and sides sunburst as well. There was once a raised pickguard pinned directly to the top, now long gone. This deep 14 5/8" wide body is somewhat akin to Gibson's much-coveted contemporary Nick Lucas design, and offers some of the same sonic character. This guitar has a notably longer scale than the Gibson, however, imparting more power and depth to the tone.

The fanciful carved headstock shape is a trademark of Kay, used on their proprietary "Kay Kraft" archtops in the early 1930s. The Oahu models soon received their own even more elaborate design, but the cool etched pearloid facing was discontinued. This instrument was in the highest echelon of what Kay in Chicago built, and while perhaps less sophisticated than its high-end competitors remains a very nice example of one of the 1930s' most distinctive looking guitars. This one also has a truly spectacular sound; it rings for days with plenty of depth, easily the best of these Oahu Jumbos we have ever heard.

This guitar shows some general play wear but remains in well-preserved and excellent playing original condition. There are numerous scuffs and dings overall, with a few pick scrapes to the top just at the edges of the soundhole. The finish has no heavy areas of loss and the stencil work to the top is in very good shape with minimal fade or flaking.

There is a short repaired grain crack to the top in the armwear spot of the lower bout, solidly sealed with some slightly clumsy touch up. The treble side of the top has a smaller but very similar repair. Two holes on the top where the pickguard was mounted are filled in and touched up as well. The tuners are recent repro Grover G-98 style branded Gotoh. There appear to have been several different sets mounted over the years, including banjo-style pegs that were likely the original fitting. Some scars from this history remain, including a couple of partially visible plugs on the face.

The bridge appears to be the original rosewood piece with a solidly sealed stress crack in front of the saddle. There has been a well-performed neckset with some touch-up around the edges; the remainder of the finish is unaltered, except for the above-mentioned small repairs. The frets appear original with surprisingly little wear; the bone nut appears later. The fingerboard was re-bound with grained ivoriod some time back.

While a very different instrument from a period Martin or Gibson flat top, this Kay-made guitar is a fine example of the quality that the company was capable of when building for a client willing to pay. This is a very fine pre-war mid-sized guitar, one of the few that resembles Gibson's much-sought-after 1930's Nick Lucas Model in size and layout but with the added longer scale. The guitar plays very nicely with a huge ringing sound, not as subtle or sweet as a Gibson but with power to spare. We find it sounds particularly good tuned down to D, but it works well in concert E tuning as well. This guitar came to us directly from Marc Ribot, who does not appear to have played it out much, so the world missed something there! Excellent - Condition.
×