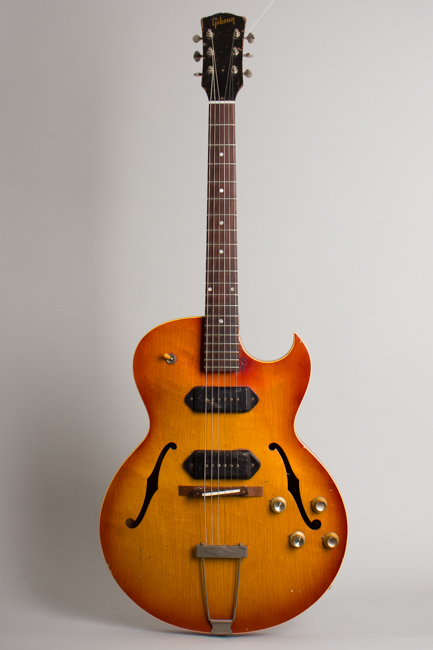 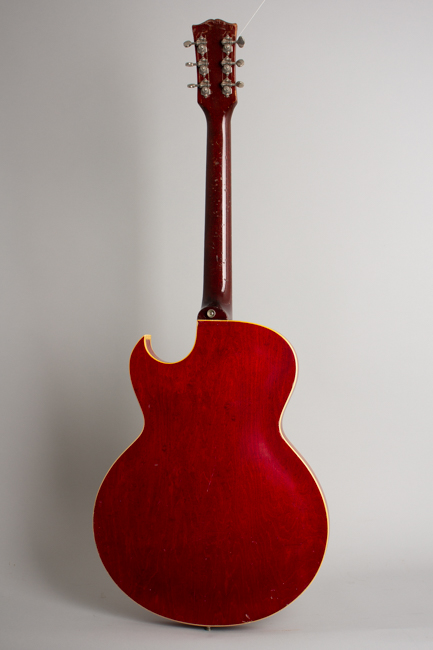 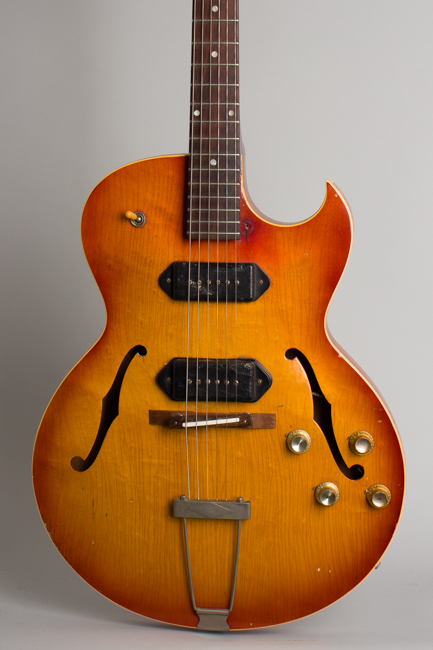 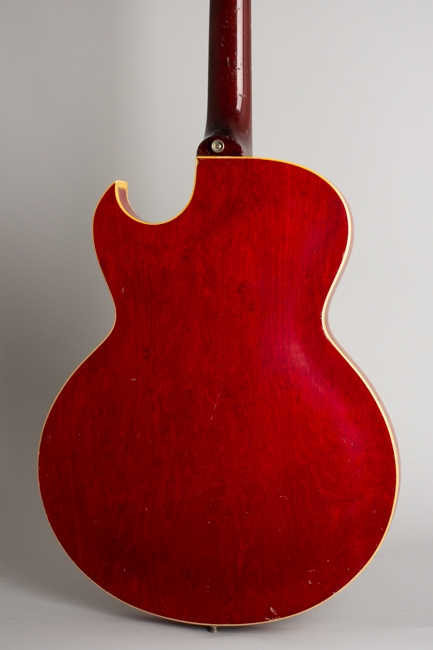 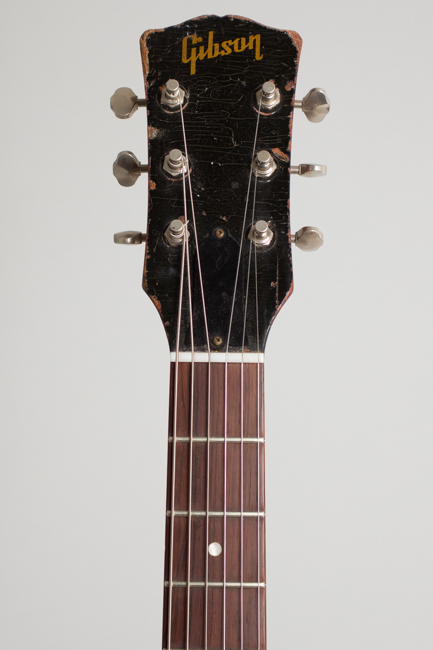 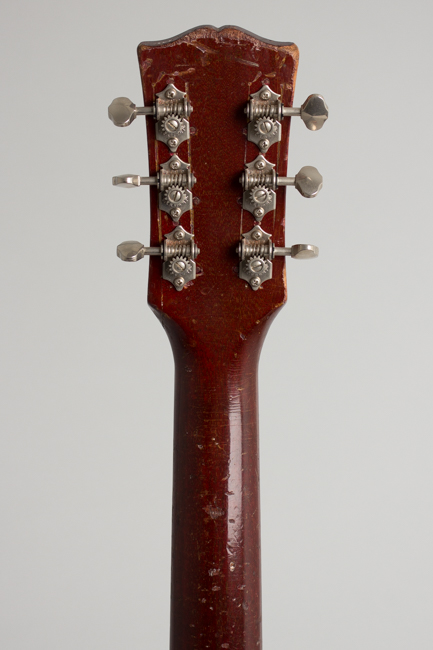 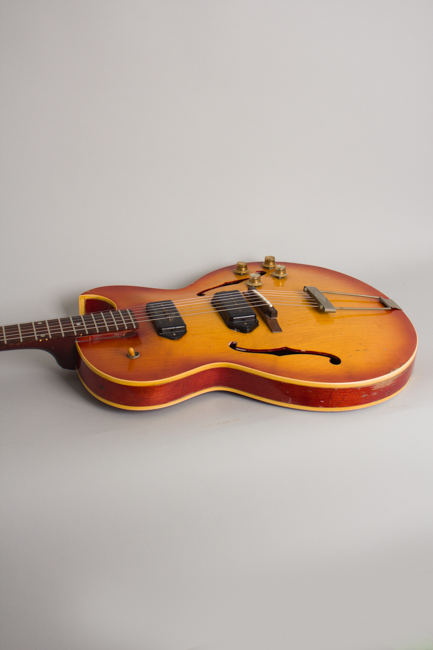 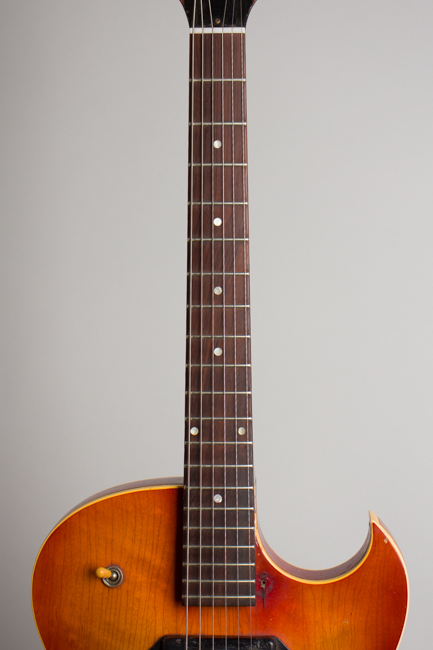 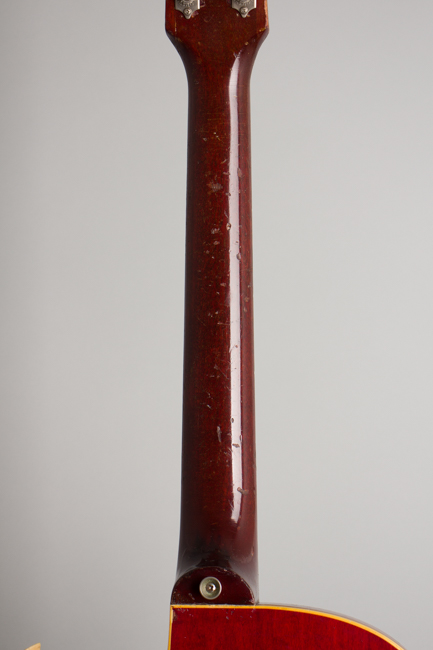 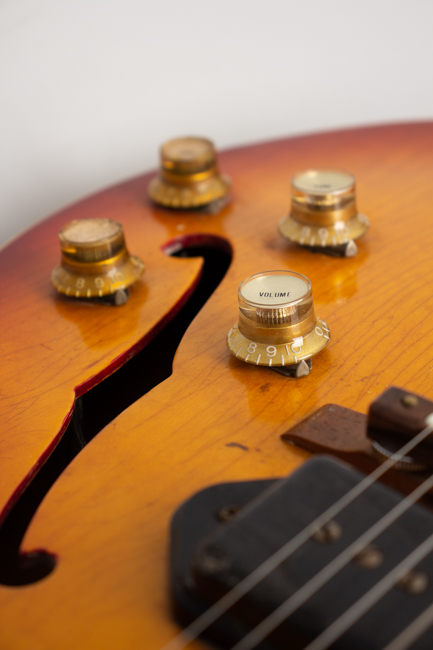 This is a very well-worn 1962 ES-125TCD, and with good reason; it was for some time a personal recording and performance instrument for New York's protean guitar maven Mark Ribot. As such it has been VERY well-used; We love Mark but he is not noted as being easy on his equipment! It remains in fine playing condition, with some subsequent repair work but otherwise pretty much as last used by the man himself.

This model was Gibson's most versatile lower-end archtop guitar, a slim and handy hollowbody offering two great-sounding P-90 pickups on a cutaway laminated maple body with a cherry sunburst top. This one still has the slim and fairly flat profile neck typical of 1960-61, but with a bit more depth than some. The appointments are simple but the sound is great. Over the years this model has been primarily identified with George Thorogood; at least it was until Marc Ribot got ahold of this one!. 633 of these rip-roaring twin-P90 models were shipped out in 1962, and this must be one of the most well-traveled of them!

This workmanlike Gibson was one of Marc's signature instruments for some years, played in numerous situations including Marc Ribot Trio gigs and notably in collaboration with Los Cubanos Postizos. In his hands it has ranged from an acoustic whisper to singing feedback, sometimes in the same piece. It shows many signs of heavy use but still sounds and plays excellent, with a lot of world-class and unique music played on it over the years.

This guitar shows a lot of cosmetic wear overall, with some repair but is still an excellent player. The finish shows heavy checking overall, especially on the top and back. There are dings, dents and scrapes all over, most heavily on the back which has a lot of scuffing. The upper side is worn down to the wood in the typical armwear zone. The headstock has lots of wear around the edges and there are numerous small dings and dents into the back of the neck.

When we first saw this guitar the neck had begun to separate from the body and needed to be re-set; this has been done and the instrument is back to having a very comfortable action. This is not an east procedure on these and there is some visible touch-up and a small crack on the lower side off the heel in the cutaway area. There are no other cracks or wood damage and (somewhat amazingly) the headstock has never been broken.

The hardware is a mixed bag, but most of it is original. The pickups and wiring appear original and correct, the pickup covers have a LOT of wear from Marc's somewhat aggressive strumming technique. The rosewood bridge base is original; the saddle is a more modern piece with an inset saddle, easily visible in many pictures of Marc with the guitar. The tailpiece is original, the knobs and switch tip are correct but later repros. The headstock appears to have had several sets of tuners over the years; currently it mounts modern Gotoh-branded copies of old Grover Sta-tites. The strap buttons are older Fender style pieces.

The guitar was refretted at some point, the frets have been recently crowned and show no subsequent wear. This ES-125TDC is a real relic, heavily played by one of the most eclectic and interesting guitar stylists of the past few decades. It bears a lot of scars proudly and has a lot of music left in it. It comes in a typical Ribot gig bag, well worn with the remains of some old flight tags on the handle. Very Good Condition.
×