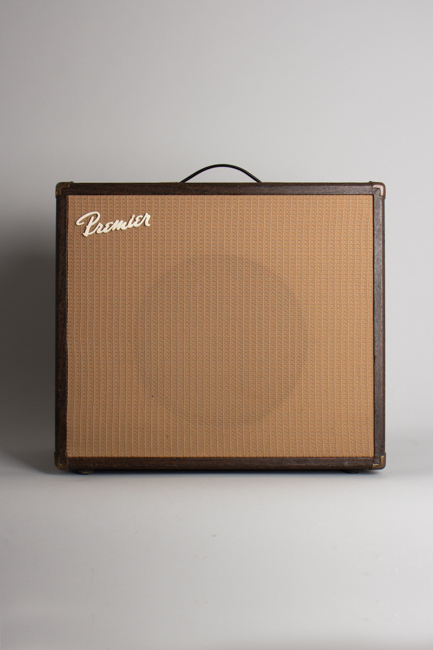 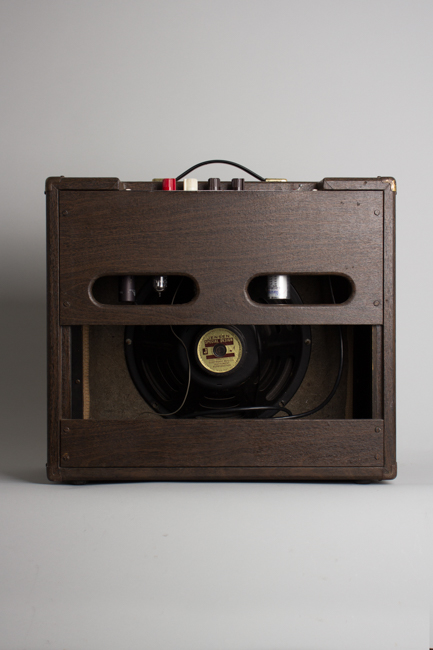 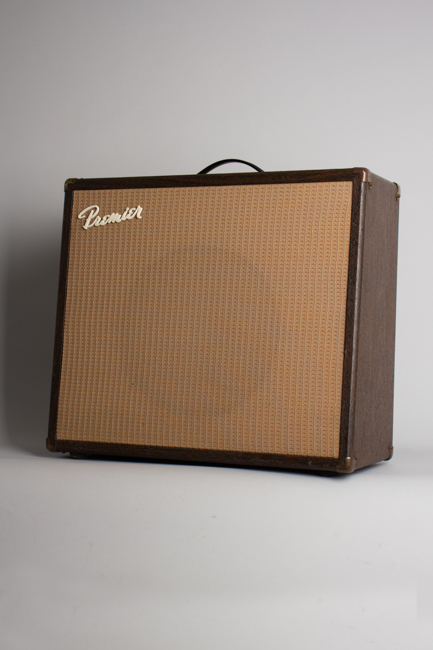 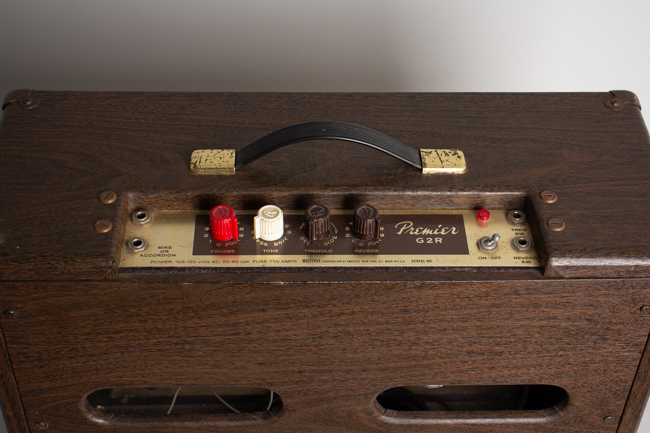 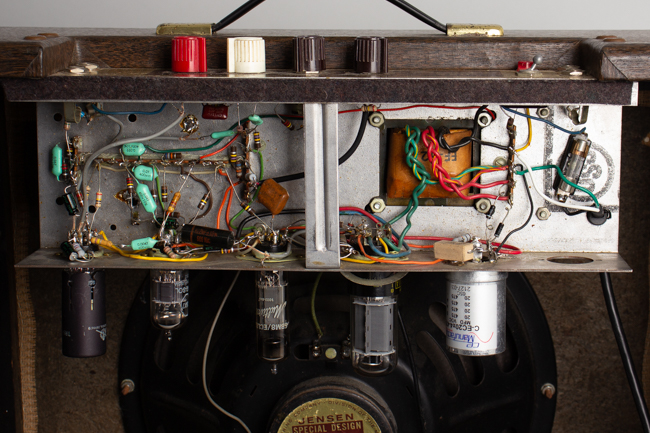 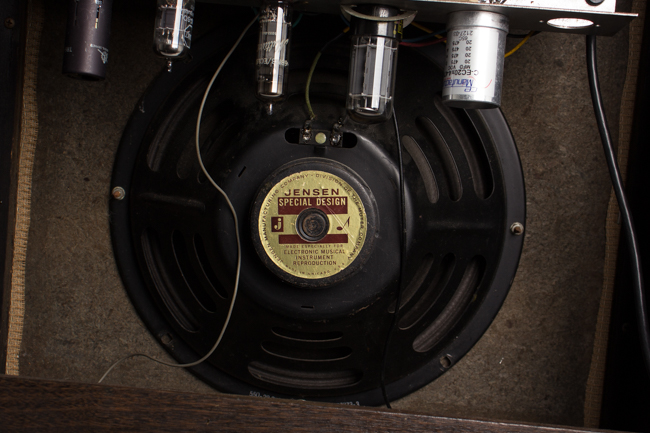 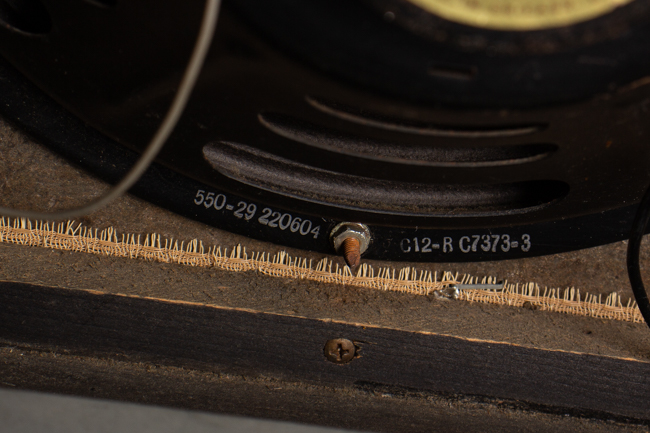 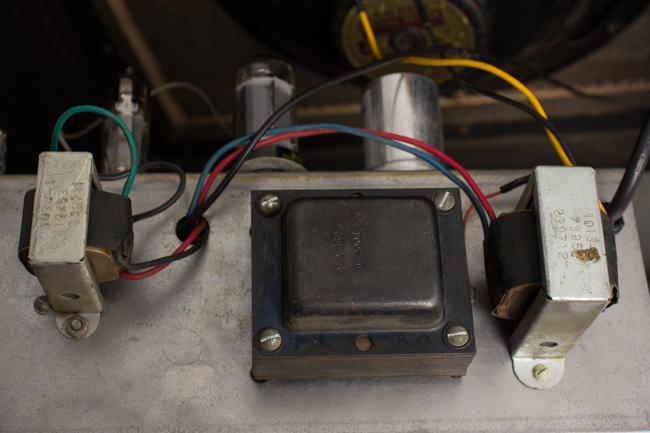 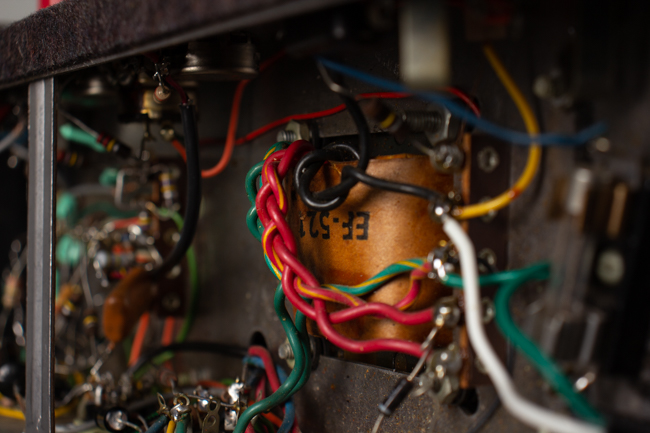 Premier branded instruments are a New York story, produced in the NYC area from the 1940s well up into the 1960s. This is a fairly late example from this well-engineered if sometimes eccentric line, a nice little tube combo from the height of the guitar boom period. Sorkin Music Company of New York City owned the Premier brand, and most if not all Premier amplifiers were built by an entity called Multivox, a subsidiary of Sorkin set up specifically for guitar and amplifier production.

The G2R appeared in Premier's 1965-6 catalog as a mid-line amplifier, listed at $169.50 and described as "a new model featuring vibrant reverberation and melodic tremolo at a practical price". It has two inputs labeled guitar and "mike or accordion", a volume and tone control, and reverb and tremolo controls. It also has a very unique tube complement, featuring a EF86 pentode input tube (most known for being widely used in early Vox AC15 amps), a standard 12AX7, followed by a 6BN8 as a reverb driver and finally a 6V6 power tube, putting out around 10-12 watts into a Jensen 12" speaker.

This G2R example is nicely preserved; the faux wood grain cabinet covering is in great shape with no notable signs of wear. The grille cloth appears to have been replaced, but the original plastic Premier logo is still intact and present. The faceplate is clean with minor signs of wear and scuffing and all four original knobs are present as well.

Electrically, the amp appears mostly original. The speaker is a Jensen P12R marked 220-604, dating it to the 4th week of 1966, and is likely original to the amp. The power, output and reverb transformers are coded 682-635, 239-712 and 239-711, dating each to the 35th week of 1966 and the 12th and 11th week of 1967, respectively, though the spliced wires on the output transformer suggest it was possibly rewound or worked on at one point. The amp has received our routine maintenance including replacement of all electrolytics, cleaning of all sockets, pots and jacks as well as a new grounded 3-prong power cord installed and biased to spec.

This is a fantastic little all-in-one 1960s combo with a great bluesy breakup that would compliment both guitar and harp alike! Overall Very Good + Condition.
×