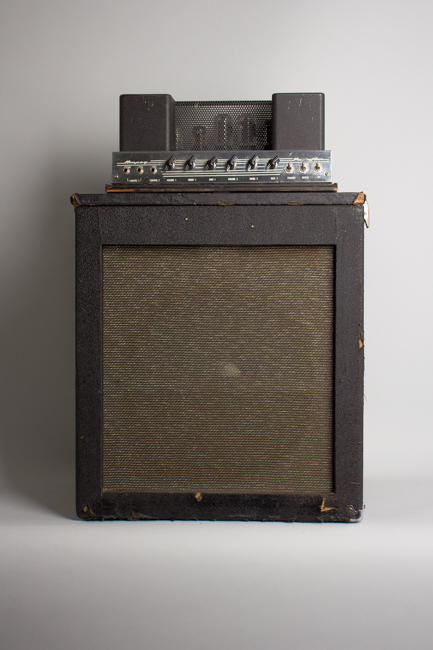 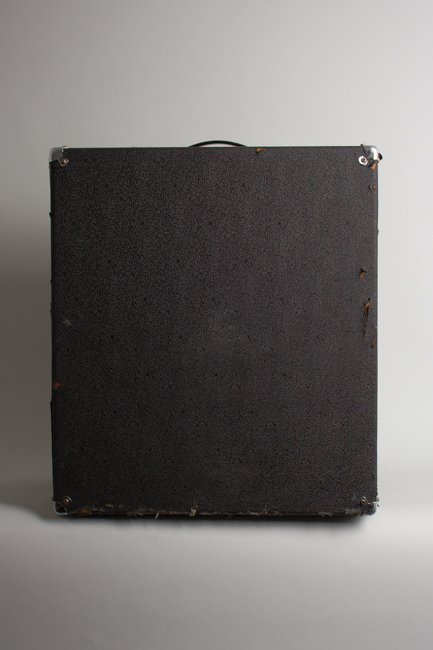 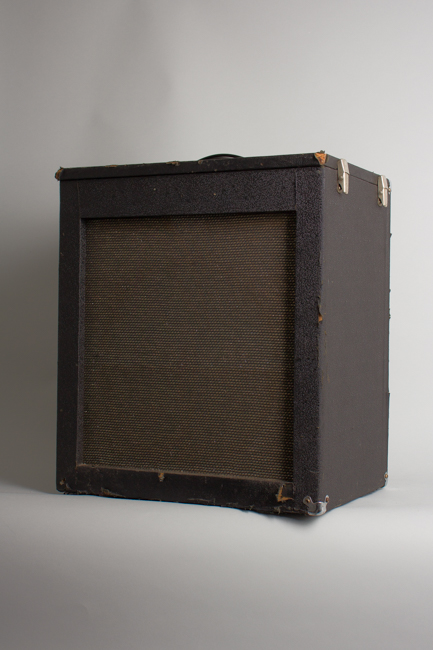 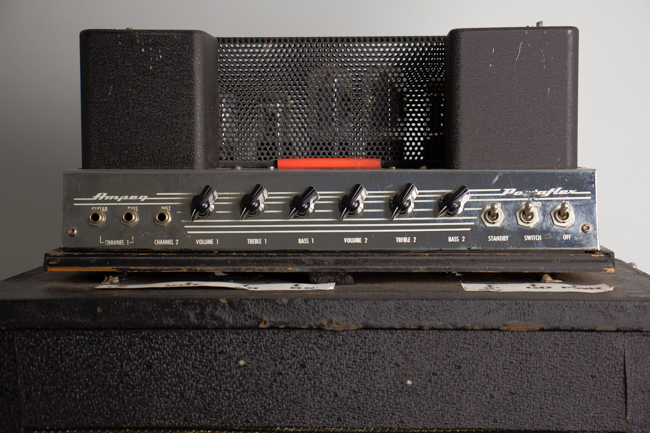 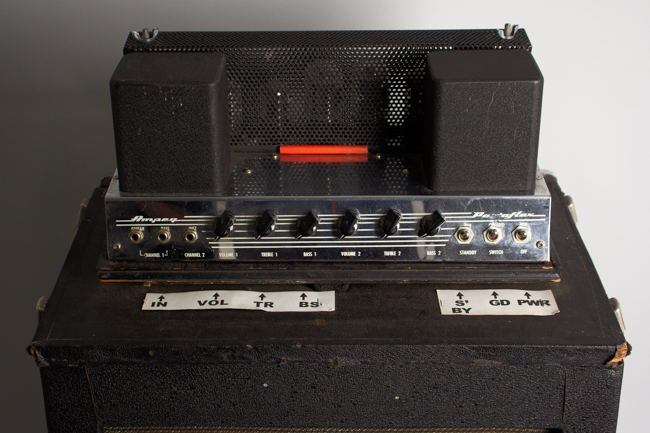 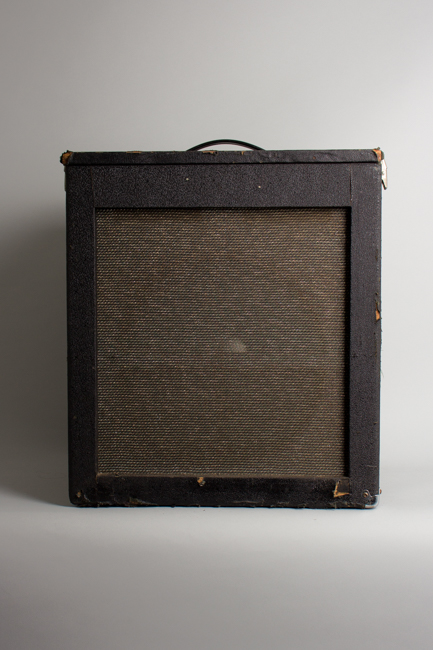 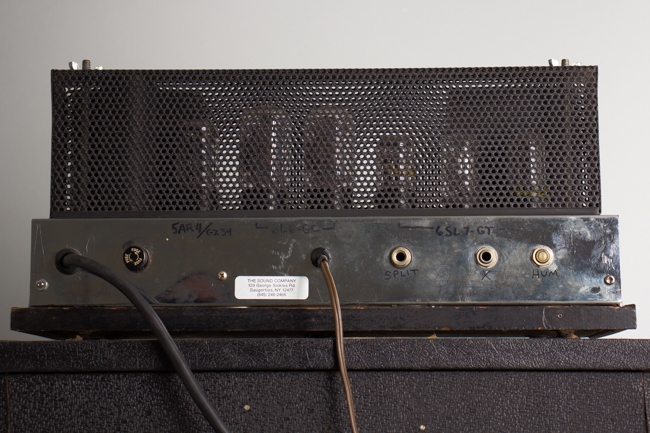 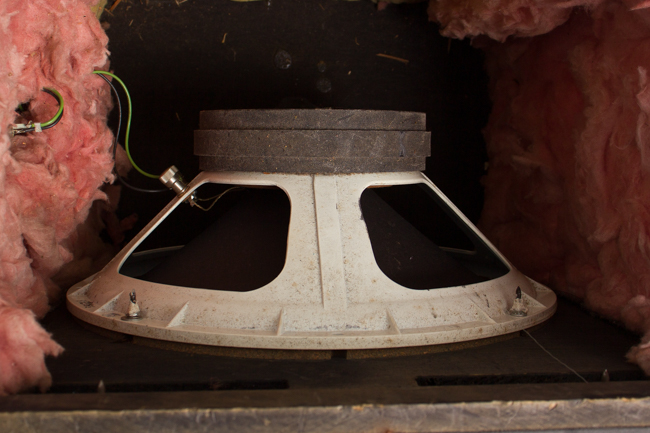 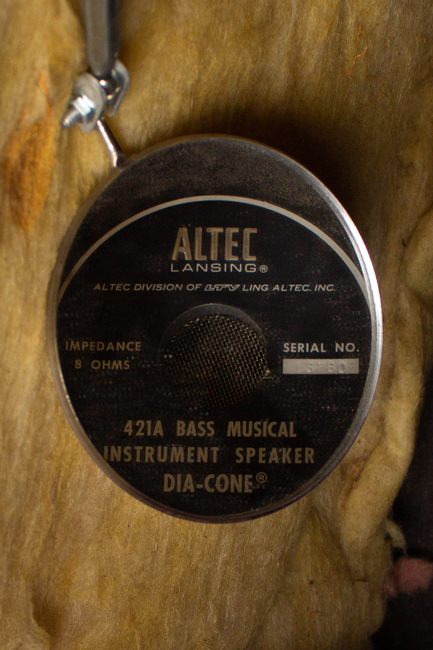 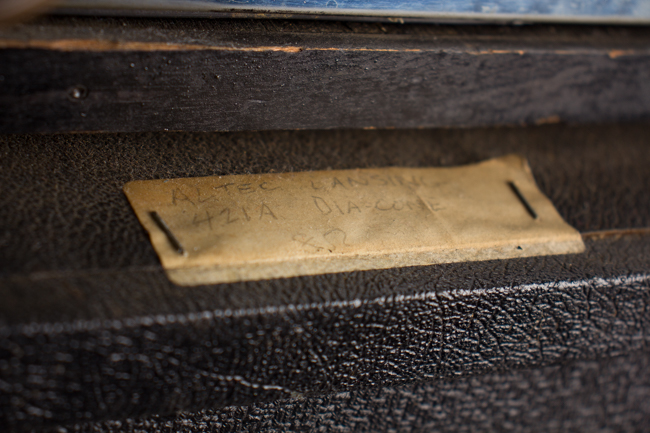 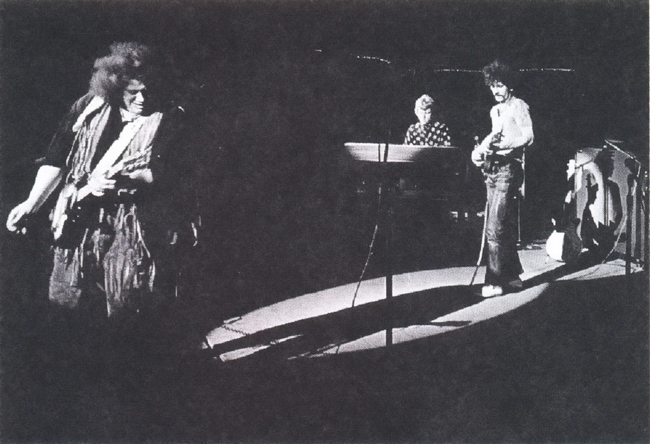 This is a somewhat unusually configured possible one-off example of one of the world's classic bass amplifiers, the B-15N. It has some non-standard features (mostly the cabinet construction) and is likely either a one-off custom variation or more likely a factory test amp. It was originally sold or given to working New York player Steve Knight (most known for his time in Mountain) sometime in 1968 or early '69, and he kept it for the rest of his life. As a working musician well known in NYC (both in the Feenjohn Group, with whom he recorded in 1966 and The Devil's Anvil, an offshoot band signed to Columbia in 1967) Steve may have had a relationship with Ampeg even before Mountain was formed and gotten this as some sort of field test amp, or non-standard factory sample

Steve Knight is mostly remembered today as the keyboard player for Mountain from 1969 through 1972, but before and after his stint in that seminal New York band was equally active locally as a bassist and guitarist. Knight already knew Mountain frontman/bassist/producer Felix Pappalardi by 1966 while in The Devil's Anvil, which combined rock and middle-eastern music. Pappalardi produced and played on their Columbia LP in 1967, with Knight playing bass and guitar. The two apparently enjoyed working together, as when Pappalardi put Mountain together around Leslie West he tapped Knight to fill out the band's sound on keys.

Knight was occasionally pictured playing bass at Mountain rehearsals; although their stage rig consisted of massive Sunn stacks (it was 1970) this amp may well have been used in their rehearsal loft in NYC. After Mountain's initial breakup in 1972, Knight primarily played in more jazz-oriented situations, where this B-15 made a perfect choice as a performance amp. According to his family this Ampeg was his primary gigging amplifier for the remainder of his career. Anecdotally he told them the B-15 was onstage when he performed with Mountain at Woodstock in August 1969, probably as his stage monitor. The film footage of the event shows a similar dark shape on the stage to his right, but that this cannot be confirmed as this amp so the story remains hearsay!

The amplifier itself consists of an apparently standard 1968 era B-15N head mounted on an unusual variation of the Portaflex cabinet. It has a larger top plate (the piece the amplifier section is mounted to) than the standard models, which extends over the front edge of the speaker enclosure. This is not something we have seen before on any production B-15, but the cabinet construction appears to be Ampeg factory work, including their proprietary screws and fittings. The metal cabinet corners are held on with Ampeg clutch screws, instead of pinned as standard. There is no trim around the front edge of the cabinet.

The amp has no serial number, either stamped into the rear of the chassis or on any internal label, The light-up Ampeg logo is not mounted to the front of the tube cage, and there is no raised logo on the top of the cabinet face. The visible pot dates are coded to the 8th week of 1968, so the amp was likely assembled sometime that year. Whatever original speaker was installed was upgraded long ago to an Altec-Lansing 421A by Steve Knight; There is a small piece of paper stapled to the top plate behind the amp unit with the speaker details recorded.

Whatever its pedigree this is an excellent sounding amplifier, the combination of the B-15 head and the high-grade speaker offering excellent low end with more headroom than a standard B-15 can usually provide. Exactly how it was procured by Steve Knight is lost to history, but it does seem to be some sort of production sample, given both its unusual cabinet configuration and lack of a serial number. And it has certainly been some interesting places and had an adventurous existence, quite possible including the most famous gig of the 20th Century!

This amp shows wear consistent with heavy gigging use but has also been well cared for. The fairly thin covering on the cabinet has a number of smaller tears overall, mostly along the edges as one would expect. Only a few spots of the covering are actually missing. Generally it is decently preserved for a well-used amp. As this is a somewhat non-standard Ampeg, in some cases it is hard to say exactly what the configuration originally was; the head has been re-mounted to the cabinet and the handle appears of somewhat later vintage. There are paper indicator sheets stapled to the top front of the cabinet helpfully showing the road crew how to plug in on a dark stage!

Internally the amp has seen a decent amount of upkeep and maintenance, including a generous amount of silicone gel applied in a number of spots to keep components from rattling at higher volume. The bulk of the chicken head knobs fitted had cracked internally around the set screws, making them impossible to tighten enough to reliably turn the pot shafts. They have been replaced with an exact modern repro set, but the originals are included for historical accuracy!

The amp has been inspected and cleaned. Usually we thoroughly service all amplifiers electronically before sale but as this is a unique one-of-a-kind "artist" piece we have not made any internal alterations. We tested is and it still works well, but we cannot guarantee its performance after sale as many of the components are long past their expiration dates. We can service the amp post-purchase, if desired for reliability if it is to be used. As it stands the amplifier sounds excellent, it has been tweaked internally more than once through the decades, notably with the silicone added to keep rattling to a minimum. The upgraded speaker gives it more headroom and projection than a stock B-15. As a piece of Ampeg and general 20th century musical history this is a neat piece, somewhat obscure perhaps but fascinating nonetheless. Very Good + Condition.
×