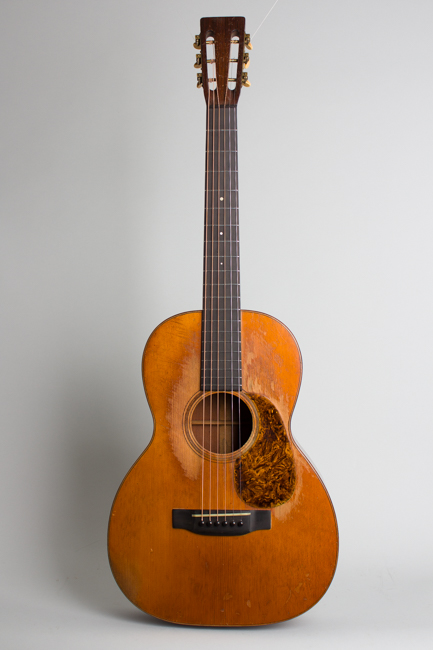 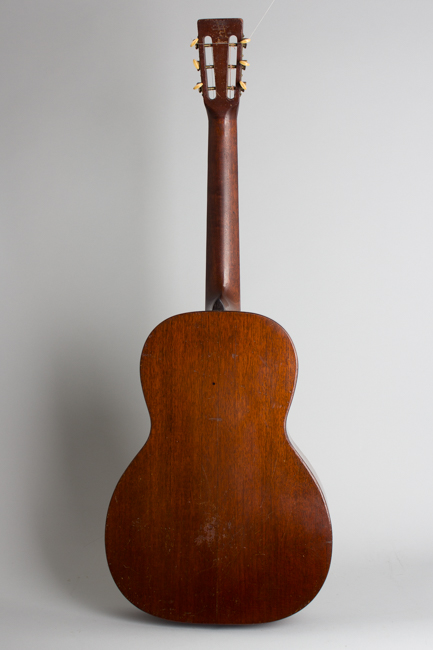 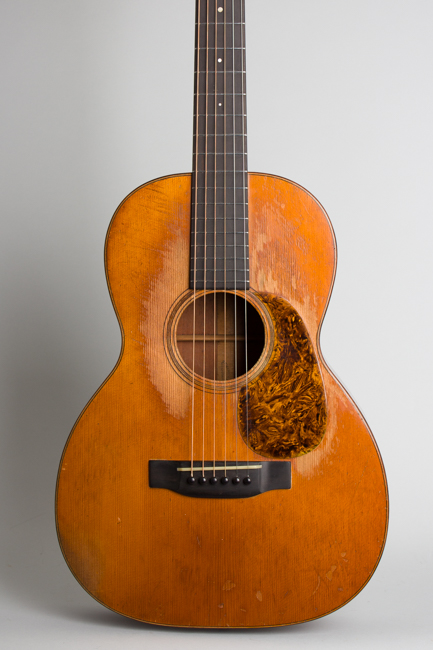 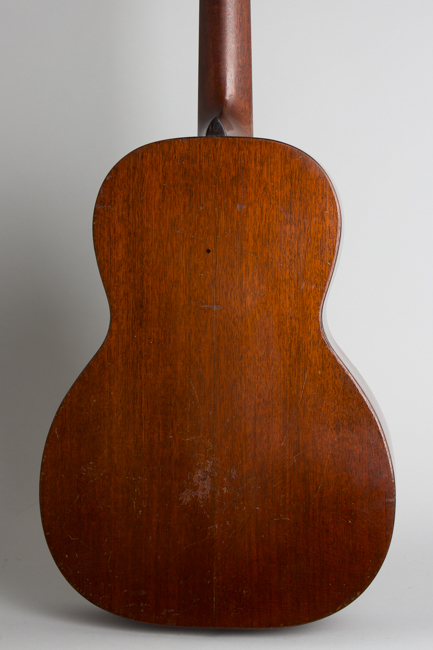 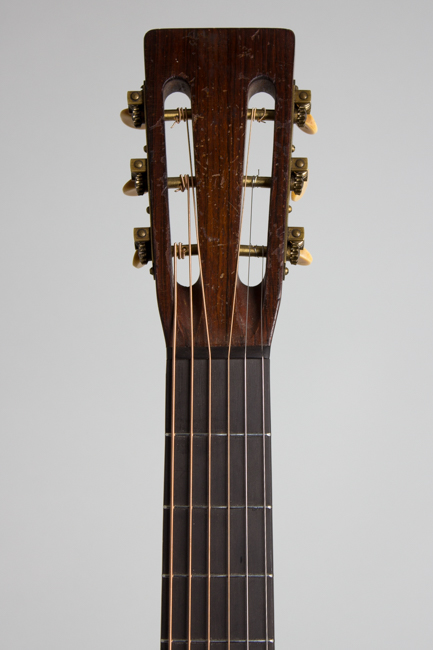 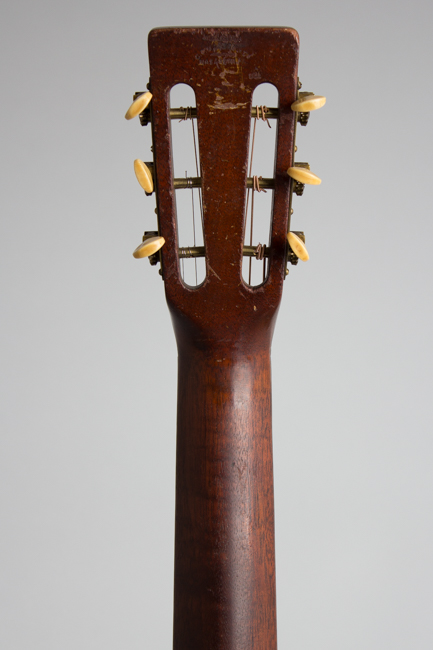 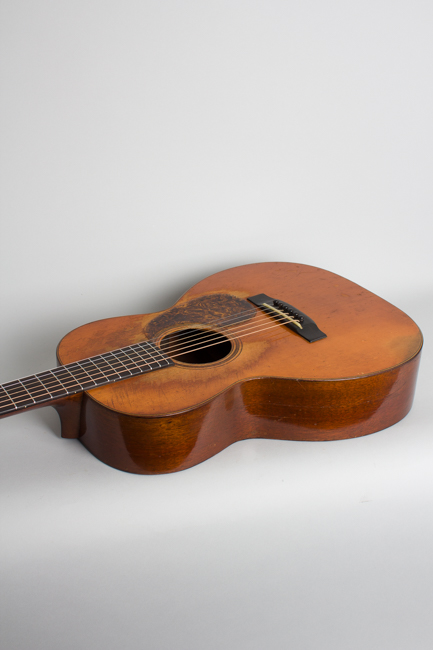 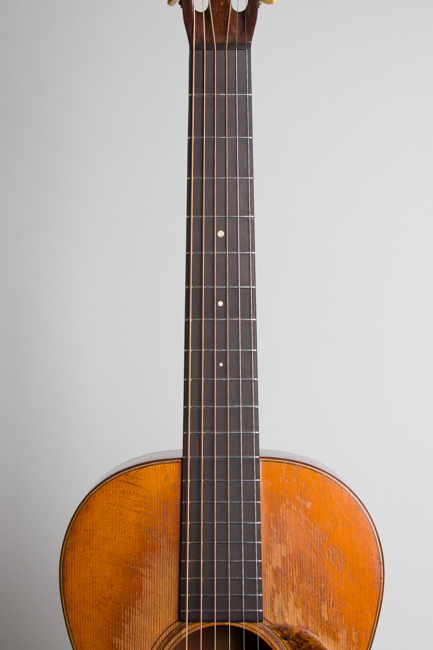 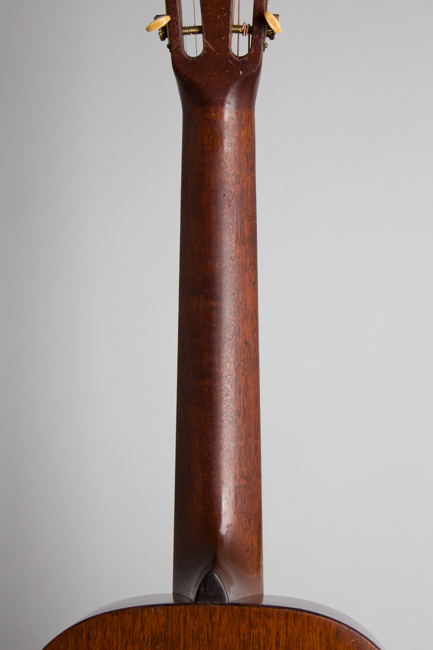 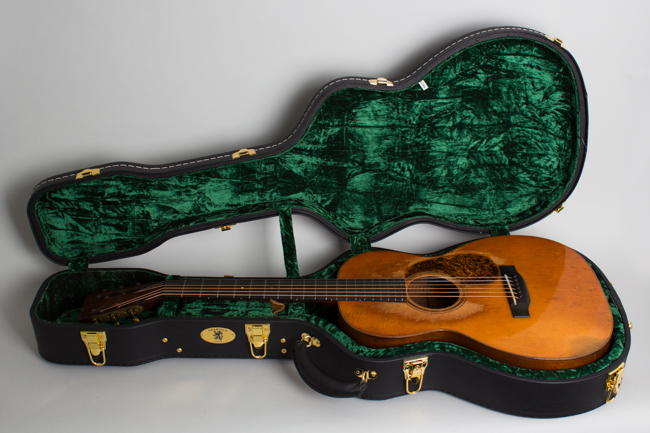 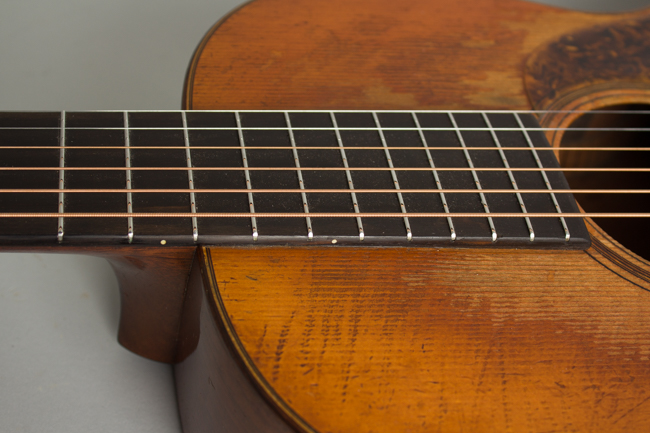 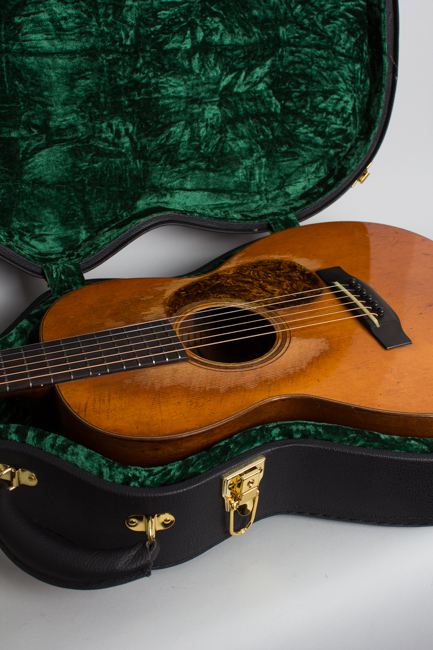 While this is a VERY well-worn guitar, it is still a spectacular sounding instrument from the best era for these 12-fret, steel string Martins. For only a few years right at this time -- just before Martin altered nearly all their designs to the 14-fret neck "Orchestra Model" pattern -- the company crafted a relatively small number of these traditional long-body scallop-braced 12-fret flat-tops braced for steel strings instead of the gut used previously.

This very early 1932 guitar has started that evolution with the "modern" ebony belly bridge and tortoise celluloid pickguard, features just recently added at the time. The other features are largely unchanged from the last century, with a wide ebony fingerboard on the neck joining the longer body at the 12th fret. These guitars were the final evolution of the original 19th century Martin patterns before the "modern" 14-fret design became the standard just a few years later.

This 00-18 was built very early in 1932 and is one of a paltry 50 examples shipped that year, priced at $45.00. Although that seems like a bargain even calculated in period money, that was a lot of cash to lay out for most Americans in the worst year of the depression. This late 12-fret 00-18 is a rare guitar by today's standards; 1930's Martins were made in small numbers compared to later periods, and if the original price seems laughable today this was still fairly expensive for a flat-top guitar at the time.

This one has loads wear and tear, and likely served at least one owner for the good part of a lifetime. The sound is more powerful than one might expect for a smaller instrument with surprising depth. The 00 12-fret design makes for a great fingerstyle guitar but also works very well with a flatpick, appropriate for stringband music to early jazz and beyond to more modern styles. These final 12-fret depression era Martins are some of our very favorite guitars, even (or especially!) this heavily "reliced" period survivor. This remains an excellent player's instrument and its survival after decades of hard use is a testament to its builder's skill, then or since at least as fine a mahogany 12-fret 00-sized model as anyone has ever made.

This guitar has had a Lot of use and some re-working over the last 90+ years but remains a very solid player. The original finish has been heavily worn (and lightly touched up in a few places) but remains largely in tact. The top is the most heavily worn with patches of strum wear into the grain around the soundhole, the treble side upper bout, the pickguard and on the bass side from the fingerboard extension towards the bridge. Some of the pickwear above the pickguard was lightly touched up with shellac, which has been worn through again. The top also has a collection of additional scuffs, scratches dings and dents.

The bridge has been replaced with a replica ebony belly bridge just slightly larger than the original pattern. This bridge has a through saddle similar to the original through saddle; it is routed at slightly steeper angle than an original bridge would have been. The top has one small repaired grain split at the very edge of the lower bout on the treble side; that is the only crack damage to the spruce top which is kind of amazing considering the hard use evident. The back has lots of scuffs, scratches buckle rash, many of which are through the finish, but no cracks.

There are several repaired grain cracks extending around both sides. One runs along most of the length on the bass side, and others along the treble side to the waist. Another runs through the heel block, this was carefully realigned and resealed. Several were glued and cleated with small areas sanded down lightly and overfinished, evident on close examination. The neck finish has been worn down to the wood over much of its length, the back of the headstock has a thin layer of shellac added. The Martin stamp on the back of the peghead remains clear. The peghead face is populated with numerous small scuffs and scratches.

Internally the bass side rim cracks have been reinforced with white cloth and both sides have been reinforced with crossgrain cleats at periodic intervals. The original small maple bridge plate is intact. The fingerboard was leveled and the nut is a replica ebony piece; the original bar frets were preserved and carefully dressed; they play well with plenty of life left. While obviously worn and not a perfectly original guitar this is a "Genuine Relic' par excellence that just oozes vibe and a fine playing and sounding example of this classic Martin. Very Good + Condition.
×