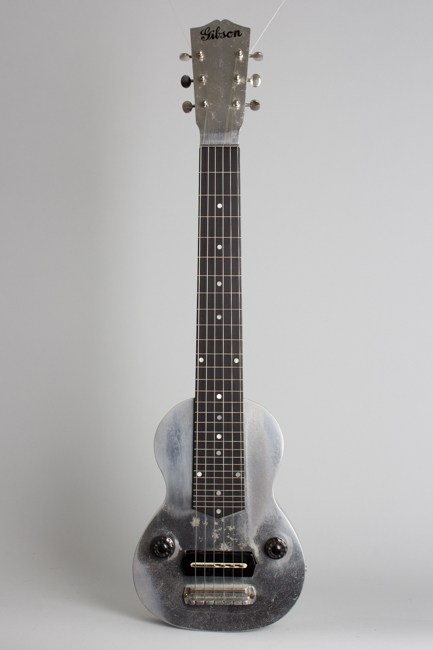 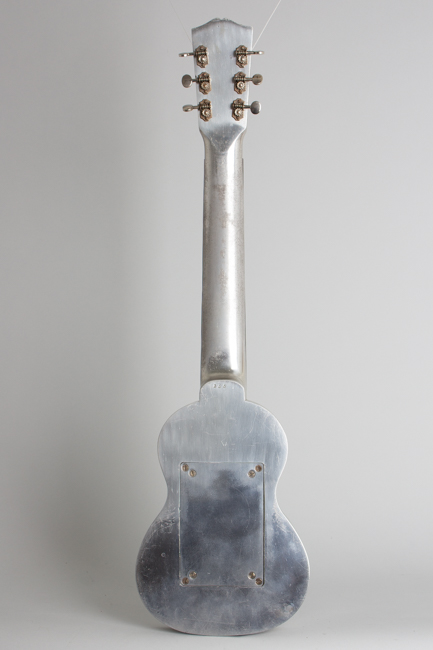 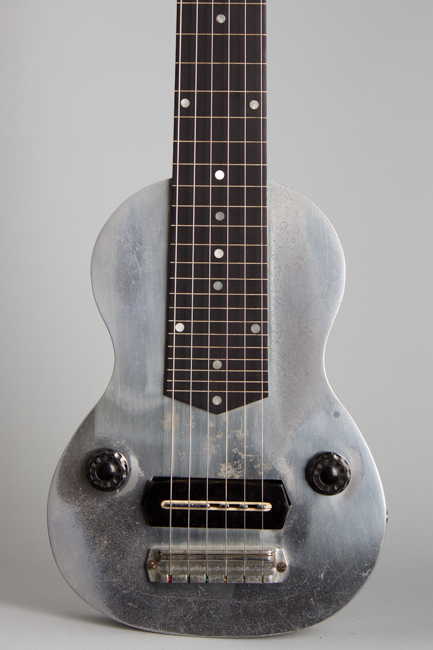 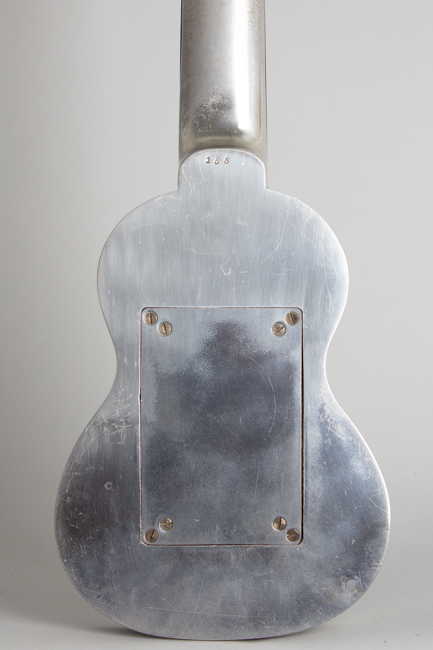 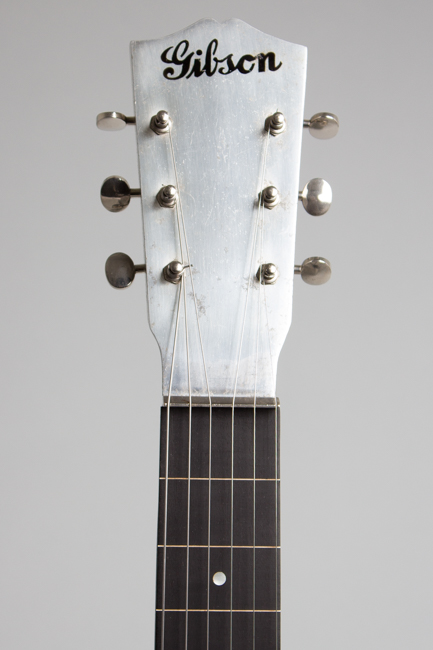 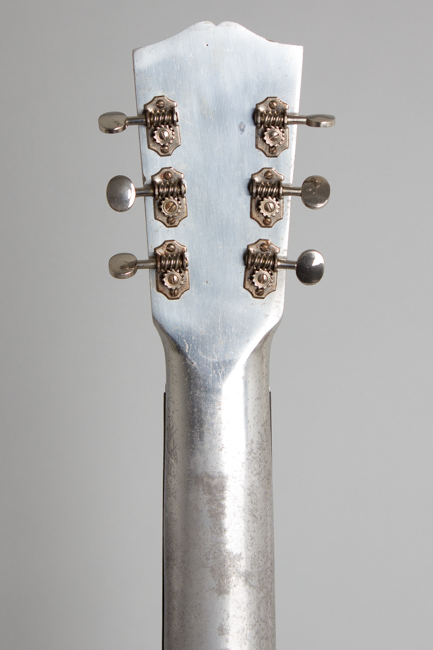 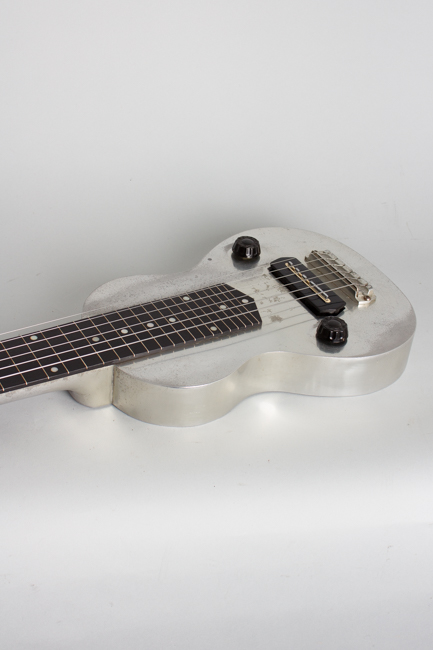 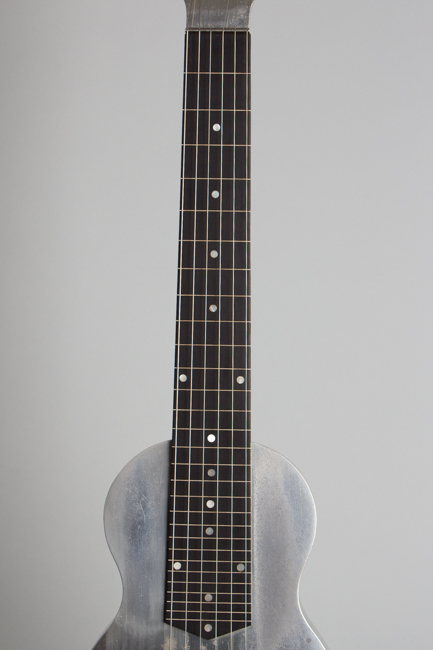 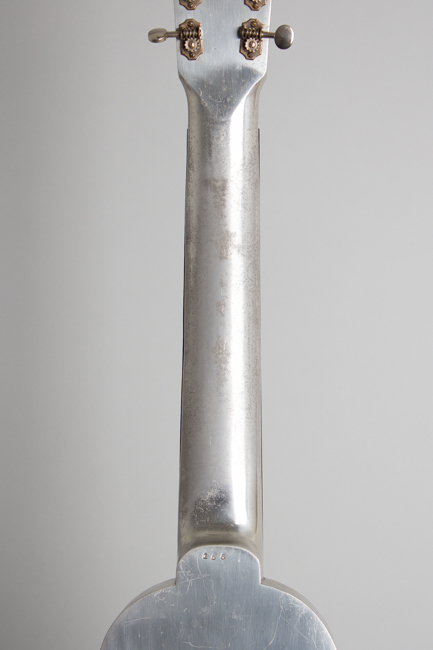 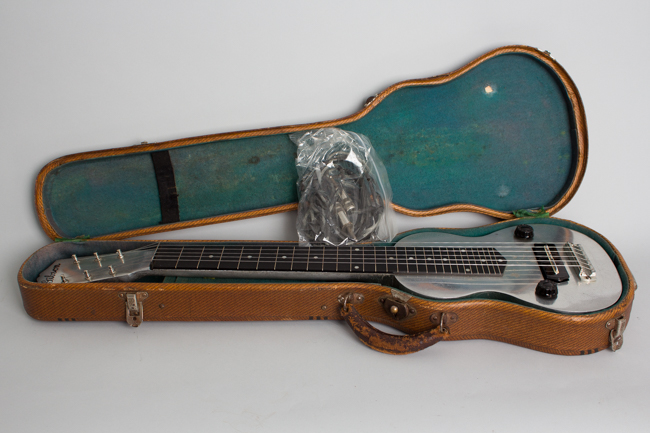 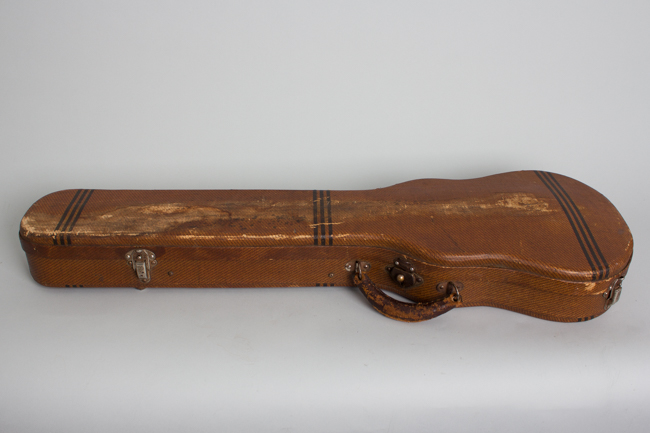 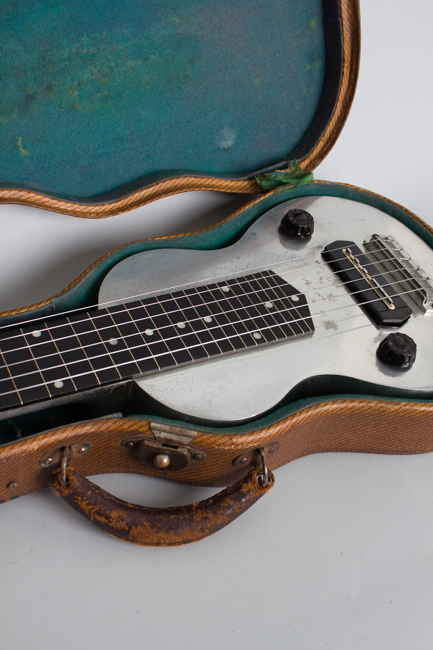 This still futuristic-looking all-metal steel guitar from 1935 is a major piece of Gibson guitar history; a very nice all-original example of the company's first commercially available electric instrument. This model was originally designated both the "EHG" (Electric Hawaiian Guitar) and "E-150" (reflecting the original $150.00 list price of the guitar-amp set). Gibson records indicate that only around 100 of this model were shipped from Kalamazoo from October 1935 into early 1936. The production run was very limited; Gibson's management quickly realized that the hollow cast aluminum body (which had to be outsourced) offered no practical advantage over wood and quickly switched to a more "Gibson-like" sunburst maple body built in-house.

The E-150 is fitted with Gibson's earliest magnetic pickup, later referred to as the "Charlie Christian" unit in honor of its most renowned user. The first version of this seminal pickup -- designed by Walter Fuller in mid-1935 -- has an unbound black plastic coil form with a single metal blade polepiece for the three bass strings and segmented blades for the treble strings. The long bar magnets are mounted below inside the body, accessed by unscrewing the center section of the back.

The very advanced (for 1935) circuitry features both volume and tone controls with a fancy Bakelite knob on either side of the lower bout. The onboard tone control was specified by Gibson consultant Alvino Rey, and was a revolutionary feature at the time. The controls and the jack (mounted on the treble side) are better laid out for the player than on many other of the earliest steels; in many ways Gibson got it right on the first try.

The body's shoulders are more rounded and merge into the neck at a sharper angle compared to the subsequent wooden-body EH-150. The unbound ebony fingerboard has a V-shaped end, white flush fret inlays and mother-of-pearl dot markers. This instrument has the second style of bridge, with slots to hold the strings but only two securing screws. The body, neck, and headstock on the E-150 are finished in polished aluminum, no doubt influenced by the already available Rickenbacker Electro A-25. The original open back Grover G-98 tuners have metal buttons and are stamped with the company logo.

E-150 serial numbers are a specific series impressed into the metal at the back of the heel, apparently beginning at 100. Available records indicate that in many cases with this model the same instrument was sometimes shipped out to several different dealers before eventually finding a home! This E-150 is stamped #155, making it one of the first 50+ electric instruments created at Gibson and likely first shipped out around the end of 1935. This is the earliest serial number we have had on an E-150.

By any standard this is one of the rarest and most important models in Gibson history. Not only were a very limited number produced, but more than a few were likely sacrificed to the WWII aluminum drives enforced from around 1942. In terms of not only Gibson history but the story of the 20th century guitar in general the E-150 is a milestone design, marking the progress of the electric guitar from novelty to ubiquity. This example shows some general wear but remains nicely original and still plays and sounds great; it also comes with the original fitted tweed case.

Overall this is a very nice original example; it appears somewhat weathered and looks to have been played seriously long ago, showing wear in all the places a player's hand would contact. Even so the instrument remains original with no major alterations. All hardware is intact; the large tone capacitor had to be re-soldered to function but nothing has been altered. Beyond the obviously worn areas from play the metal surface shows numerous small dings, dents, and scratches; there are also areas of clouding and the small "spiderweb" corroded spots typical of weathered aluminum.

There are several small inexplicable filled holes in the metal body on both the top and back; these appear to be factory or at least period work and are rather inconspicuous. Oddly enough this is not the first E-150 we have seen with these marks and they may be related to the production process. The sound is unique -- this is the only instrument to combine the celebrated "Christian" pickup with a metal body. This well-played E-150 is simply fabulous piece of playable history, still in the original tweed case which has some staining on the lid but is substantially intact, with the remnants of an original period cord inside. Very Good + Condition.
×