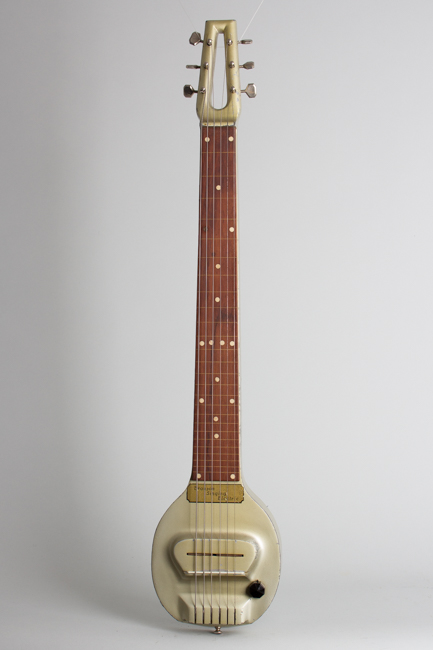 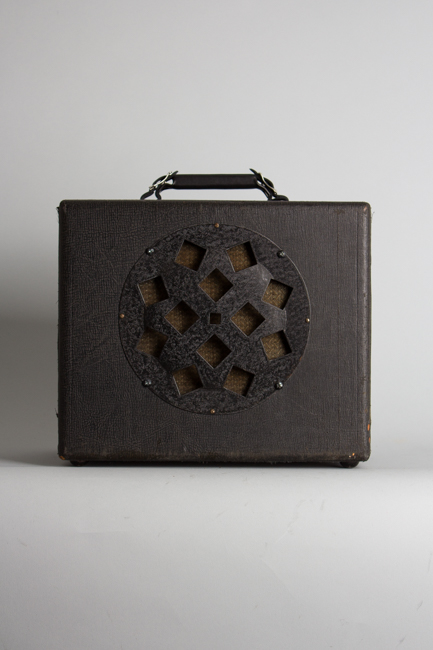 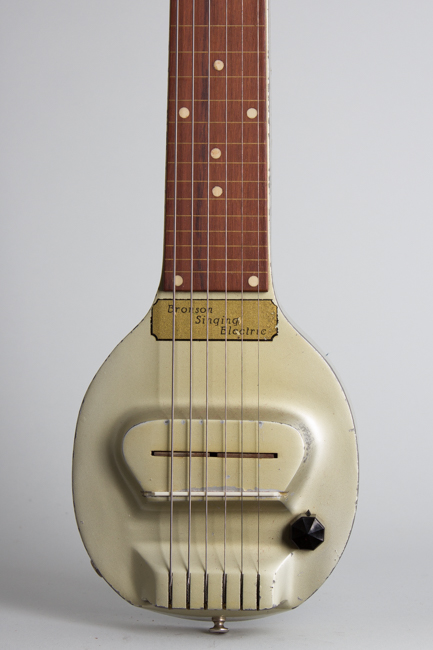 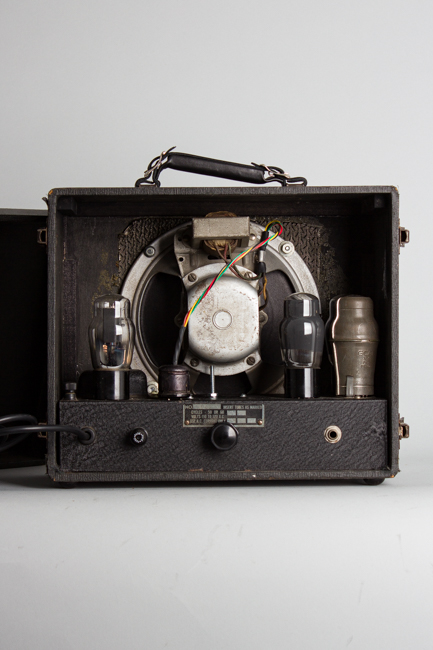 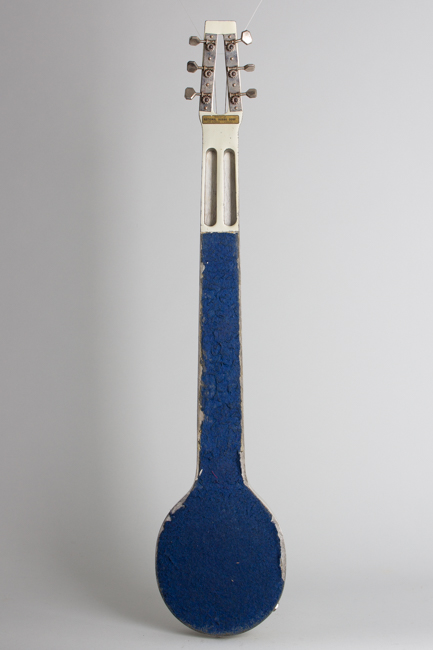 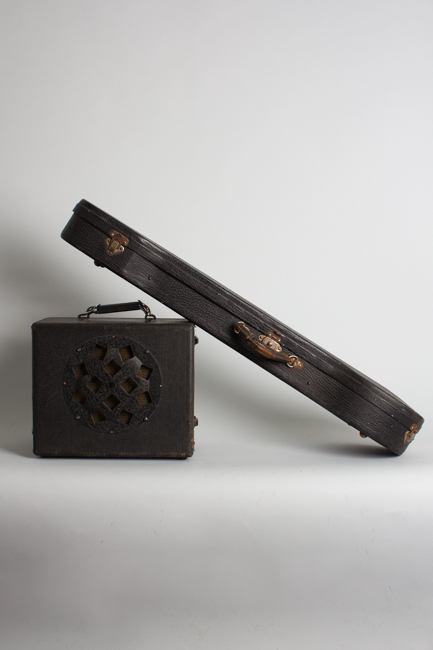 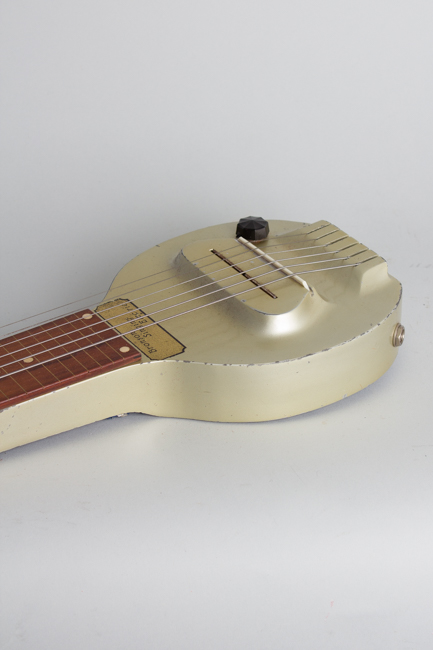 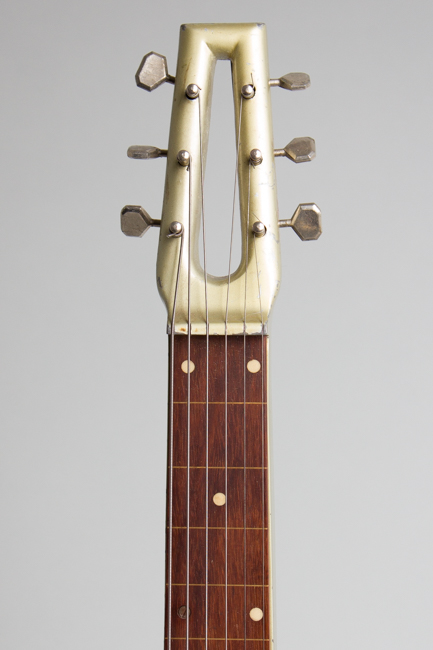 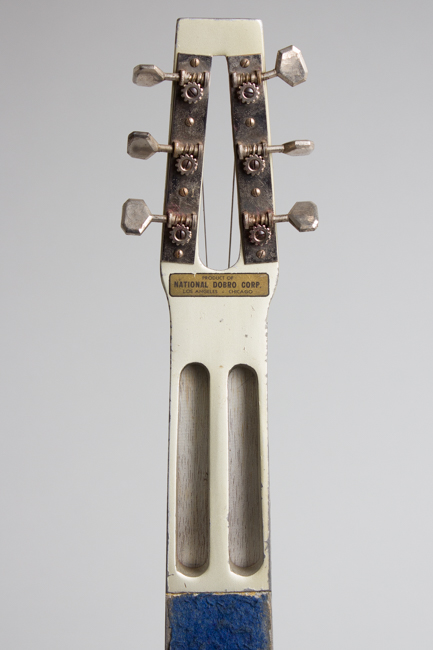 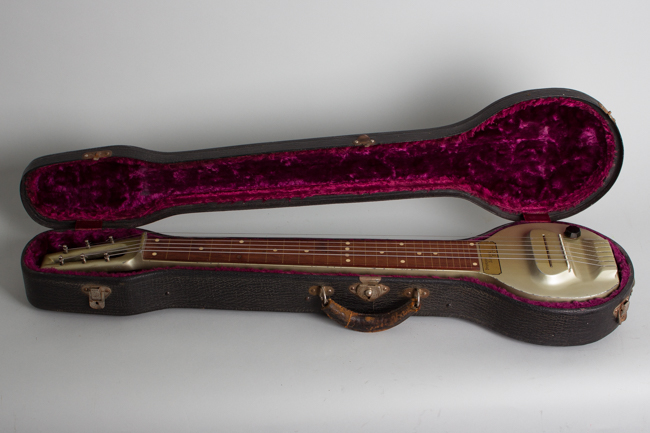 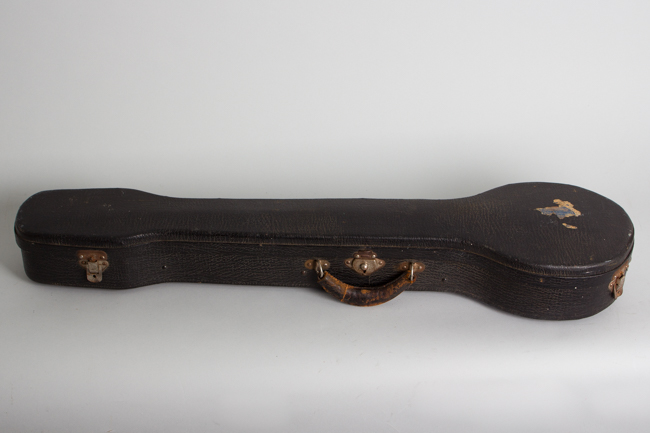 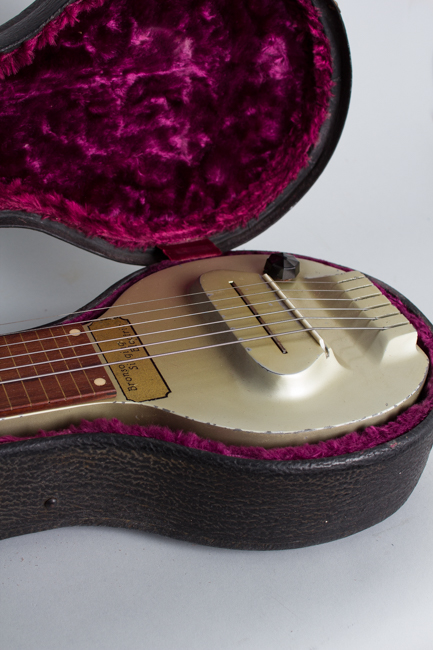 The Bronson Company was a Detroit-based spinoff of the Oahu publishing empire that did a virtually identical business selling Hawaiian guitar arrangements to teaching studios, and the guitars to go with them. Bronson-labeled instruments are mostly Hawaiian guitars, and this appears to be the earliest electric lap steel model they offered. Over the next couple of decades the firm would be supplied by several different subcontractors including Rickenbacker and Regal; in this case the National/Dobro corp. is the builder. This gold-washed cast aluminum steel is a relabeled version of the first Supro model, in itself a rare and very early down-market electric instrument, possibly the first such guitar intended primarily for students.

Essentially this is a simplified version of National/Dobro's first generation of electric lap steels, using the same blade pickup and cast aluminum construction in a considerably smaller and lighter form. These instrument came to market soon after the Rickenbacker "Frying Pan" and use similar materials, the Supro version being closer in feel to the rick Than the larger and heavier National and Dobro instruments. Bronson must have contracted with National early on, as this re-branded steel is identical to the first 1935 Supro version.

The Deco-styled long thin body is an aluminum casting with the tailpiece and pickup housing cast in, finished out in a silvery/gold enamel. A wooden guitar fingerboard is affixed to the top, not fretted but with dots and inlaid lines for visual guidance. This first National pickup is mounted from the rear; it has a blade polepiece with an internal magnet and is controlled by a single volume control near the back edge of the body. The minimalist headstock has the central area cut away with gently rounded edges on the face; it mounts openback Grover strip tuners with metal buttons.

This very striking design is a pure Deco classic, simple but elegant despite its budget intentions. "Bronson Singing Electric" is emblazoned on a decal on the face of the body, while another decal on the back announces this as the product of National-Dobro Corp. The small amp is not branded at all; it is typical for the time, putting out 3-5 watts with a single volume control, perforated metal coverplate over the speaker and a removable back panel. This rare set is not only the earliest known style of Bronson-branded electric, but the earliest Supro electric instrument and one of a handful of the first commercial electric steels extant. It is a neat piece of history and still a fully playable instrument.

This 85 year old set is fully functional and sounds really cool, albeit not particularly loud. The guitar remains all original except for the plastic saddle mounted on the pickup housing (the original would have been bone or metal). There are some small dings and chips to the finish, the flocking on the bottom is somewhat worn and one celluloid dot is missing from the fingerboard revealing the screw beneath. One tuner shaft is fairly seriously bent, but the peg still functions fine. The original fitted guitar case is nicely intact, with the remnants of a period sticker on the lid.

The amplifier has been fully serviced with some cap work to keep it running and a new 3-prong cord. The cabinet shows some general wear but is fully intact, a new handle being the only change. The set functions as intended, with a sweeter sound that is less bright than many pre-war steels. The polished-round strings on the guitar appear period, or at least quite old but still sound fine; we have left them in place for the time being but of course they can easily be changed as desired. This is simply a neat piece of history, a very early electric instrument and still unique looking and sounding lap steel. Overall Excellent Condition.
×