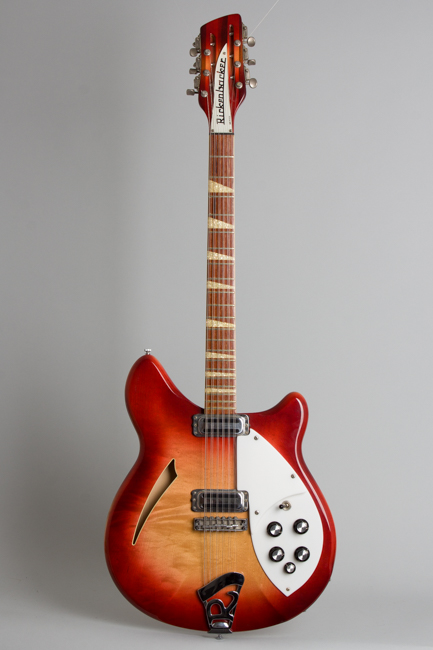 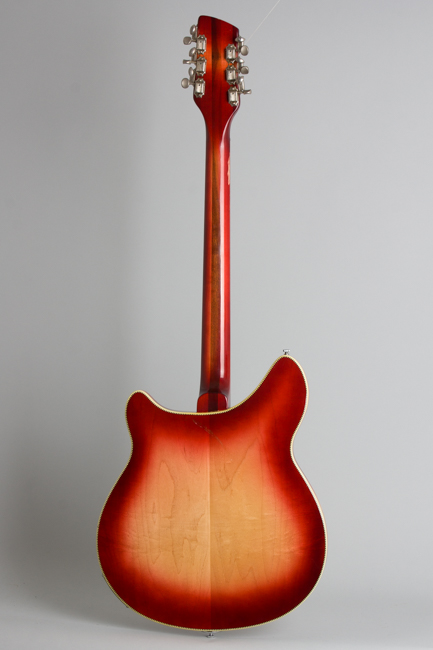 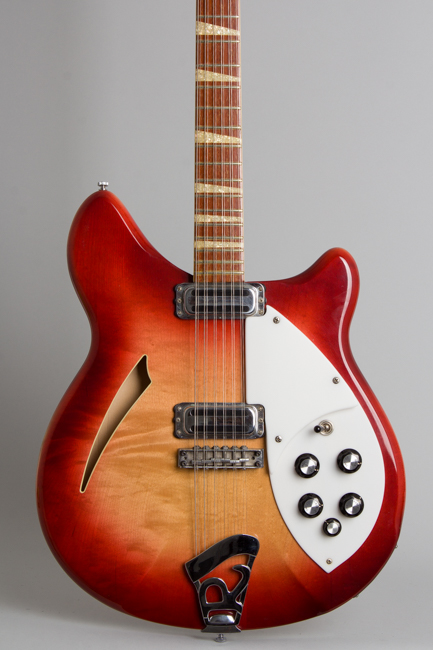 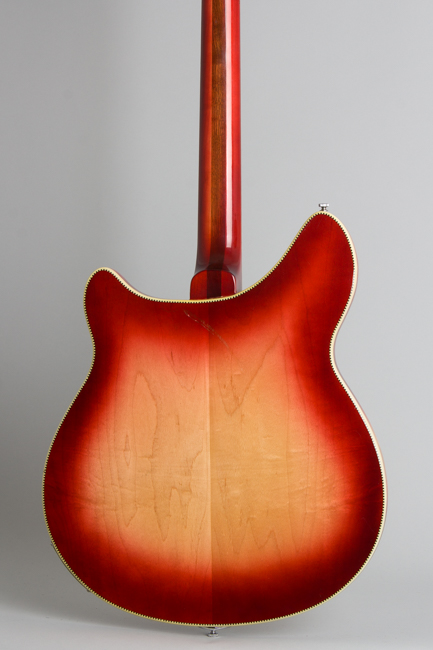 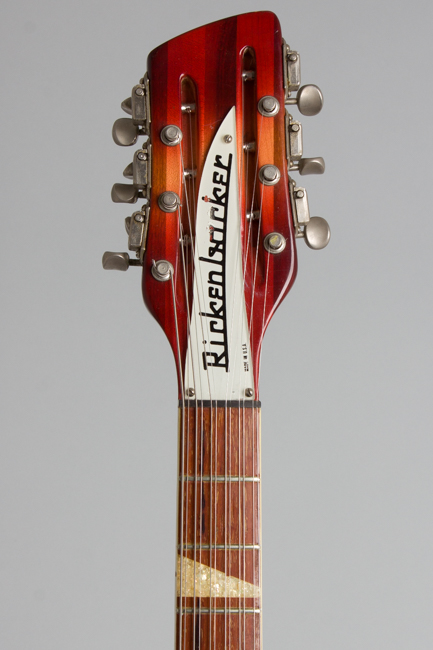 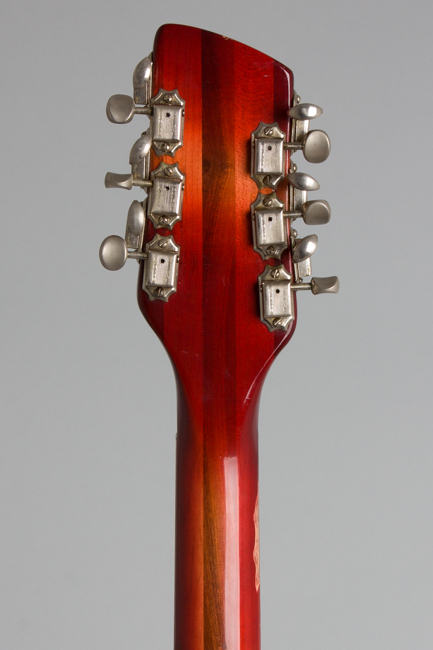 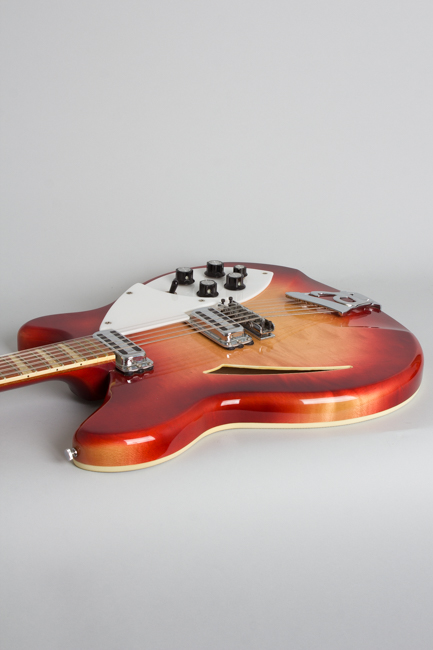 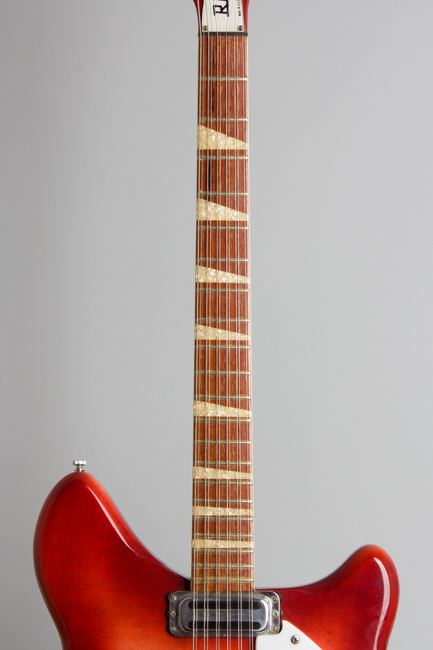 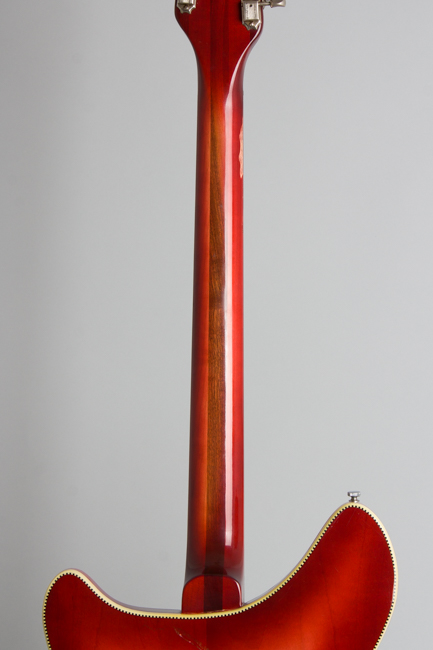 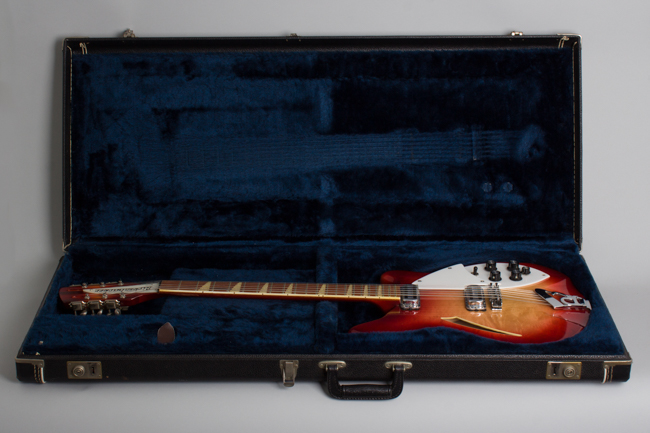 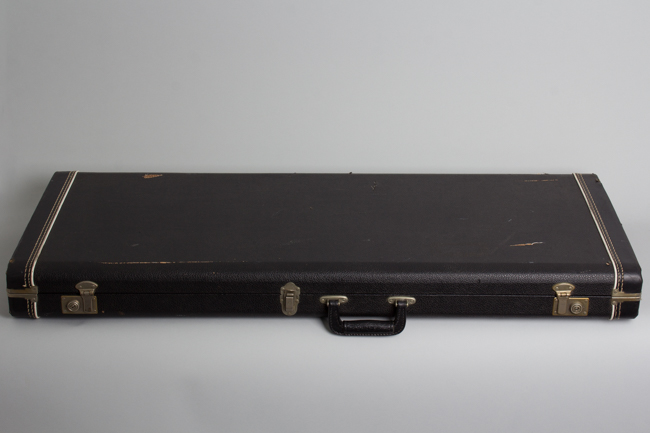 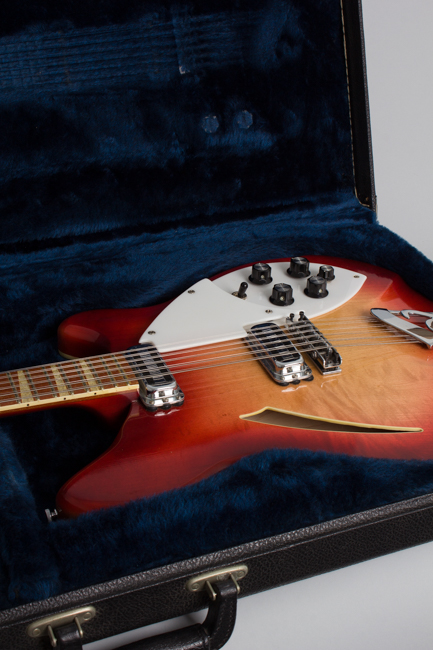 The Rickenbacker 360 is one of the sharpest-looking and most distinctive-sounding of all American guitar designs, and kicked off a wave of popularity for the electric 12-string in 1964-6 that had every other maker trying to catch up. It remains one of the absolute classic American guitars; in the mid 1960s the unique sound of an entire style of music centered around it. The mainstay of the company's line from 1964 right up through to the present, the 360-12 is the instrument that really put Rickenbacker on the map as a modern guitar maker.

The Model 360-12 was the more deluxe style of Rickenbacker 12-string with triangle fingerboard inlay, a back-bound body, and bound sound hole. It remains virtually an icon of the '60s, synonymous to many with the sound of the folk-rock era as well as more recent "jangle" styles.

This 360-12 was made in November 1966. It is the second generation of the model with the rounded top design introduced in spring 1964, which is the most recognizable version. The body and neck carry a very vibrant iteration of the classic red sunburst "Fireglo" finish. The fully original wiring rig has pots dated the 33rd week of 1966.

At the time this one was made there was a 6 month to a year dealer waiting list for this model, which the company struggled to keep up with. One production alteration is significant -- after the summer of 1966, Rickenbacker no longer routed a channel for pole magnets under the neck pickup, so guitars from that point on like this one have a much solider neck joint and often better angle than earlier examples.

Guitars identical to this were used in 1965-6 by George Harrison of the Beatles, Brian Jones of the Rolling Stones, and countless others in the 1964-70 period, and maintain a timeless "cool" factor to this day. Despite all the other electric 12-strings made since, the Rickenbacker 360/12 has remained the single dominant instrument of this type for well over 50 years now. This is one of the nicest we have ever had and a must for anyone who desires the unmistakable sound and look only the original 360/12 can provide.

This 360-12 remains nicely original with some light wear and one typical minor repair. There some light wear to the finish mostly on the back of the body, where there is one long scratch and some very buckle marks into but not through the lacquer. The finish has a beautiful deep red color with the classic ambering of the clear areas and hardly any fade.

As most Rick fans will know, the truss rods in these guitars have often been adjusted improperly by uneducated folks over the decades, which can all-to-often cause the fingerboard to pop up and separate from the neck at the nut end. This one has signs of this malady, very solidly repaired but visible with some finish missing on the bass side by the nut and a slight but feelable seam on the treble side. This is not an ongoing issue (the rods work fine) but the repair is visible.

The guitar remains otherwise free of oft-seen period Rickenbacker maladies; the neck joint is solid and the angle excellent, the action is very low with room to go on the bridge, so playability is extremely good. This one is not near mint but fairly close except for the fingerboard repair; very clean overall, and a really excellent playing and sounding example. It is housed in a 1970s period Rickenbacker HSC. Excellent - Condition.
×