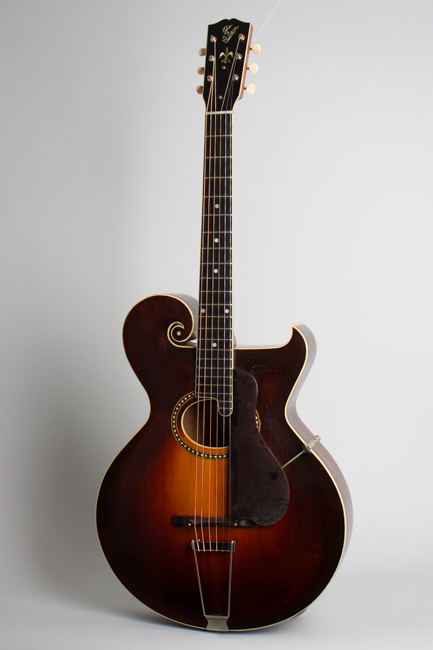 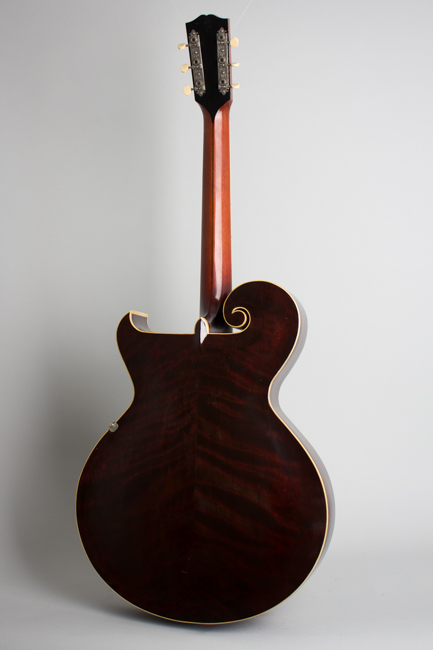 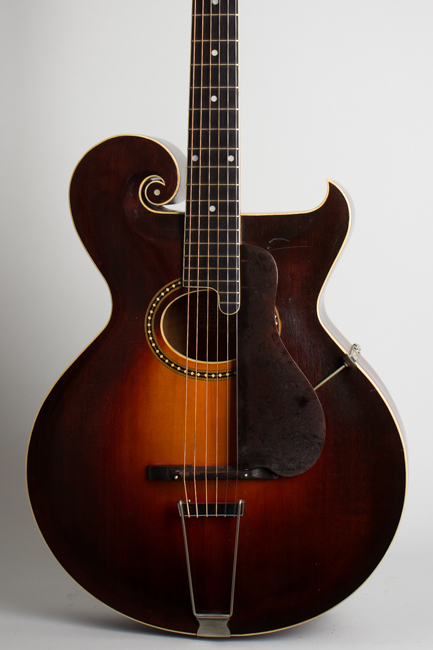 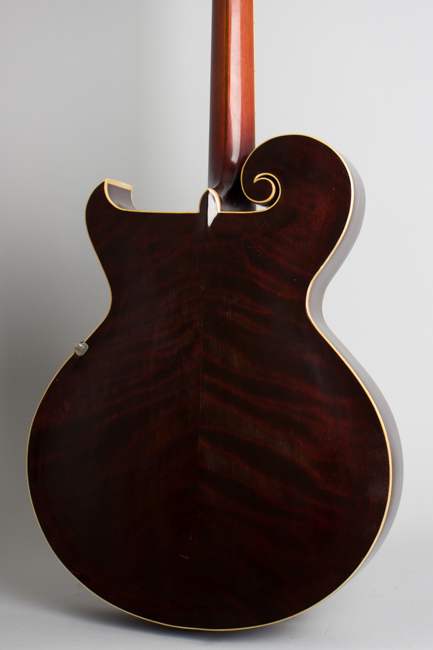 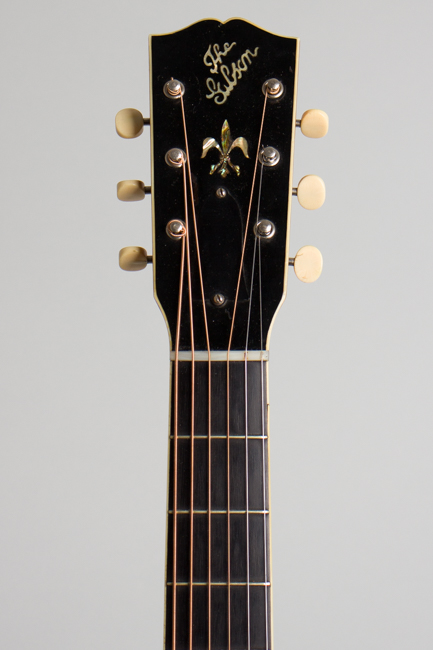 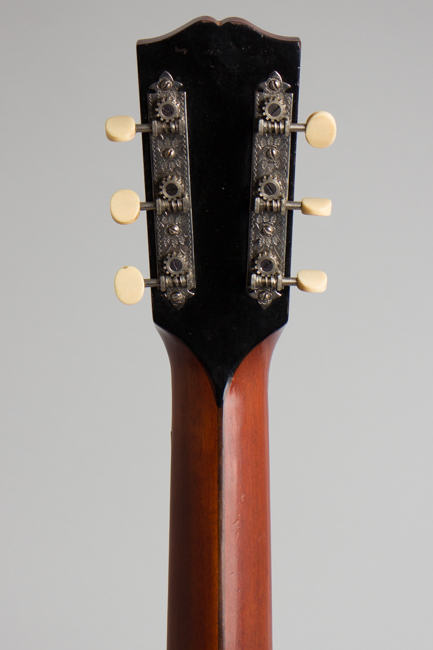 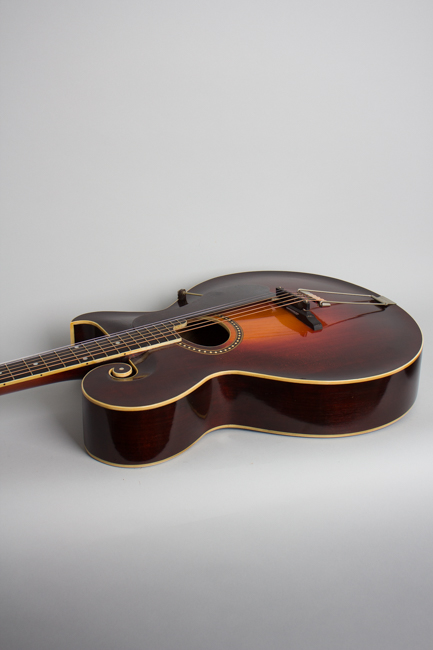 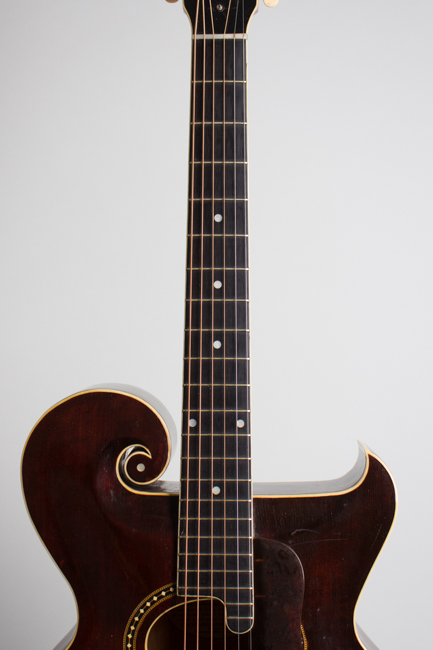 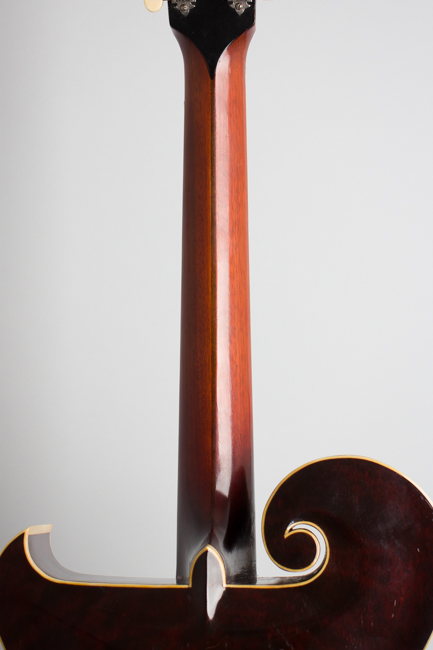 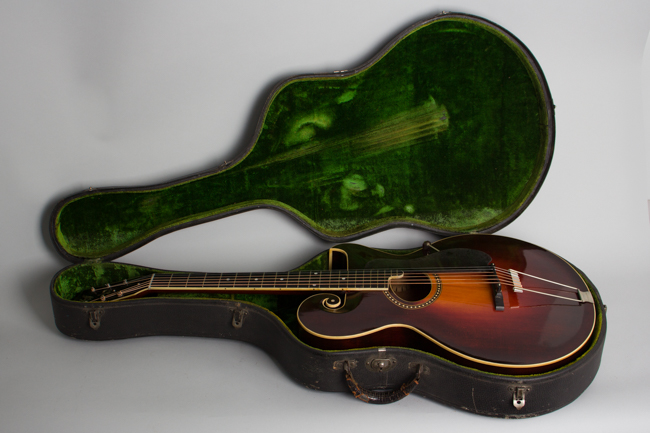 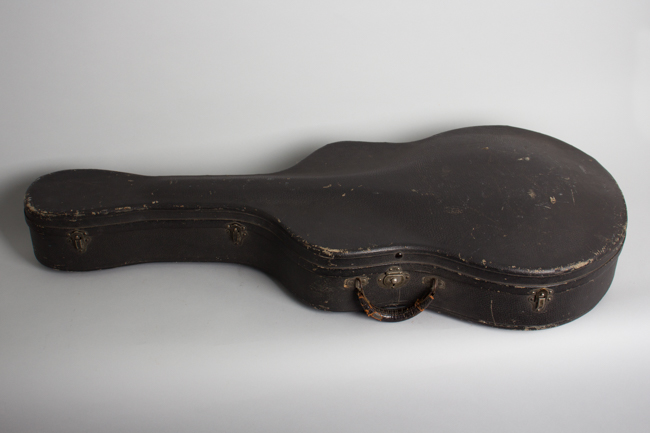 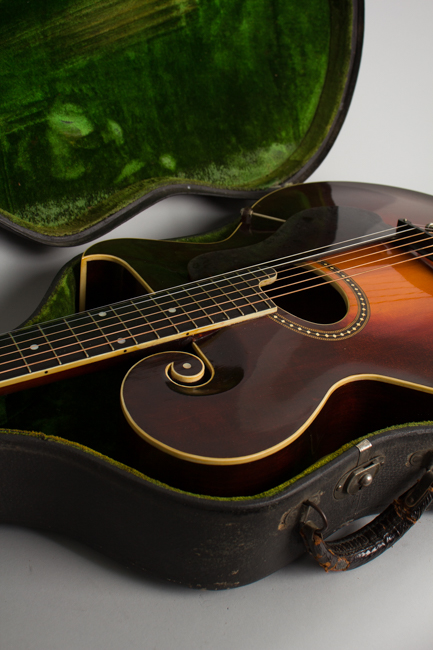 This lovely guitar represents the end of a Gibson tradition as it is from one of the last batches of Style O Artist Model guitars ever made. These were one of the company's most visually arresting creations, unmistakable even from 100 yards away. Designed to harmonize with the company's mandolin orchestra instruments, this guitar has not only an elegantly scrolled upper bout but a dramatic swooping cutaway on the treble side. This feature allows more access to the fingerboard than any guitar of the period, and indeed the 15th fret neck joint was a revolutionary if under-appreciated idea at the time.

The Style O "Special Grand Concert Artist Model" was introduced in 1908 as Gibson's new version of their top of the line 6-string guitar. It was last cataloged in 1922, the year before this one was made; the FON and serial number indicate a mid-late 1923 timeframe. This was probably the influence of Lloyd Loar who had just helped design its replacement as Gibson's top-line 6 string the L-5. The Style O was probably perceived as a relic of earlier times compared to the sleeker L-4 and the revolutionary F-hole L-5, but these last ones still received a number of Gibson's new feature upgrades.

This guitar shows many of the latest Gibson features for 1923 that would soon characterize the L-5. The finish is not as red-tinged as earlier examples, approaching Lloar's beloved "Cremona" tones. The adjustable ebony bridge, all-metal "string over tailpiece" and most important the then-new adjustable truss rod are all present. Only the very last Style Os are so equipped. Classic appointments of the model include (of course) the elegantly scrolled cutaway body, single bound in heavy ivoroid top and back, chunky V-profile neck and bound headstock with a pearl Fleur-De-Lys and "The Gibson" script inlay. The oval soundhole has an elaborate multi-part rosette, partially covered by the elevated pickguard. The ebony fingerboard is bound with pearl dot inlay, with a small 2-fret extension on the treble end and a genuine pearl nut.

The Style O was one of Gibson art Nouveau masterpieces, but by the "Loar era" had reached the end of its run. 1923 was a time of major changes at Gibson, with Loar's Style 5 Master Models just coming off the line. This Style O is a older feeling design but absolutely the best-sounding of these we have had, with a thinner carved top imparting a rounder tone and more responsive feel than earlier examples. The neck is quite large but still manageable, this is a genuinely playable and better-sounding instrument than many would expect.

Atlanta orchestra guitarist/banjoist Perry Bechtel played a similar late-model Style O before the Martin OM was designed for him; he is pictured in the later 1920s Gibson catalogs with it. This is not only a cool piece of Gibson history, but just a superb Style O, as good an instrument as these ever get, more of a player than most and a very rare piece still housed in its original shaped HHSC.

This guitar has some fairly minor wear overall, but is very well preserved considering it is just coming up on its 100th birthday! There is fairly minor finish checking and small dings overall, with one noticeable scratch on the top off the front end of the pickguard and some deeper dings on the back. There are also some marks on the back that appear to be from prolonged contact with an old braided neck cord. Really though the finish is very fine for a Gibson of this period, Still shining like it did before Calvin Coolidge was in the white house with no major loss.

There is one typical Style O repair, a very cleanly repaired old heel crack that is barely noticeable, with none of the usual overspray or added finish. These are routine for this model, the legacy of a laminated heel block that (in retrospect at least) was not a good idea. All hardware is original including the tuners, tailpiece and even the oft-missing tortoise celluloid pickguard with the original mounting hardware. The carved ebony adjustable ebony bridge is original with the turn-over Hawaiian saddle and serial # penciled on the underside. The saddle has been lowered a bit under the wheels and the top re-sculped slightly for the sake of playability.

The frets are original with some very light wear, indeed this guitar simply does not appear much played since 1923-4. That's the 20th Century's loss as really this is easily the best sounding Style O we have ever had our hands on, hands down! Almost 100 years on this relic of the transition between the "old" and "new" Gibsons under the direction of Master Loar is just about as nice as it could be, includes a well-preserved original Gibson hard case. Excellent - Condition.
×