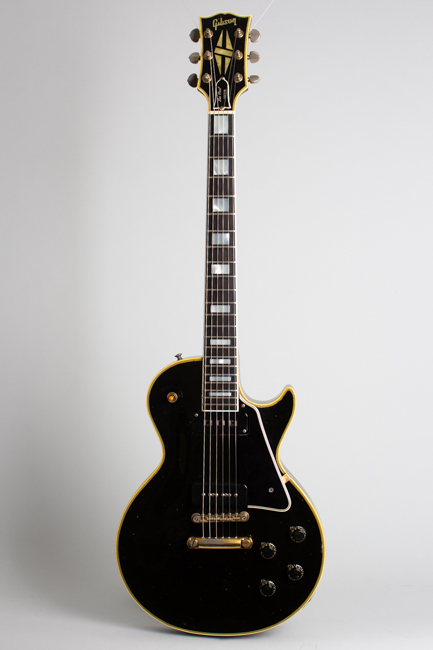 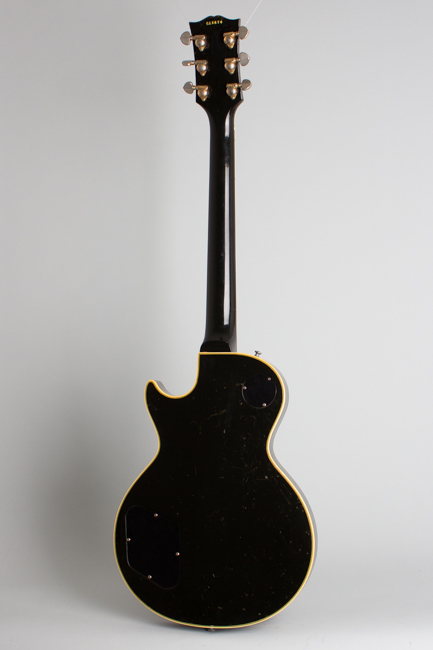 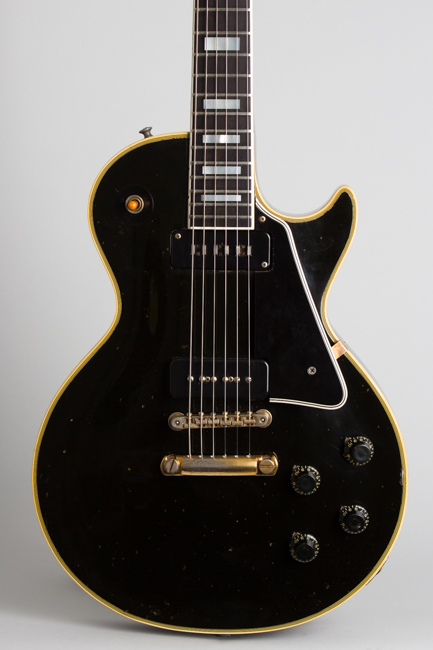 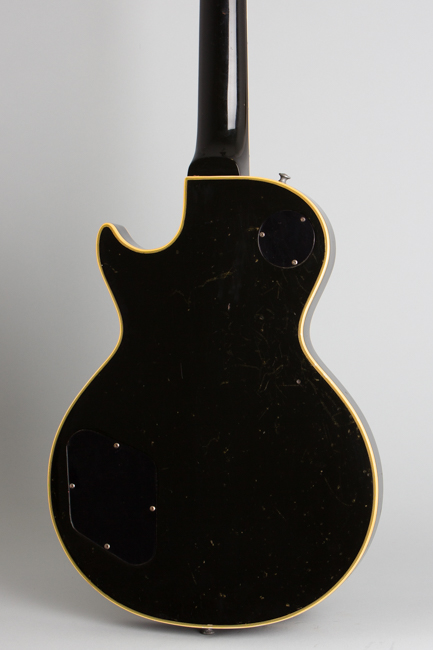 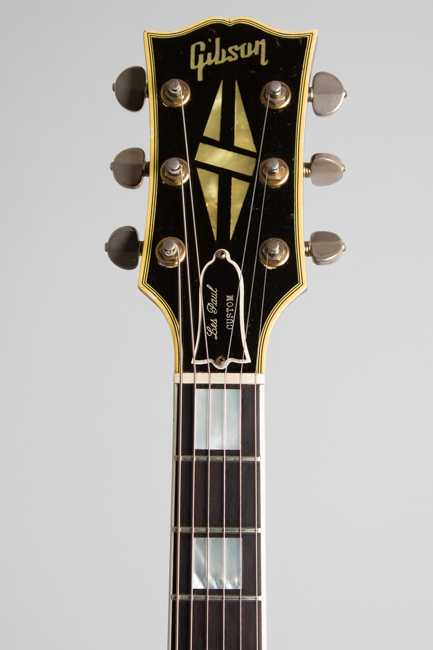 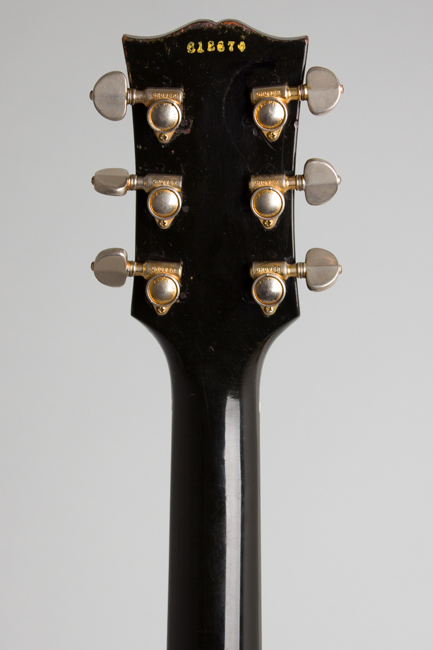 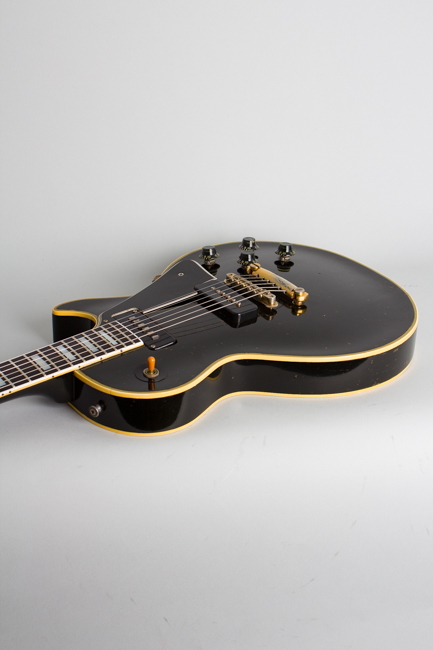 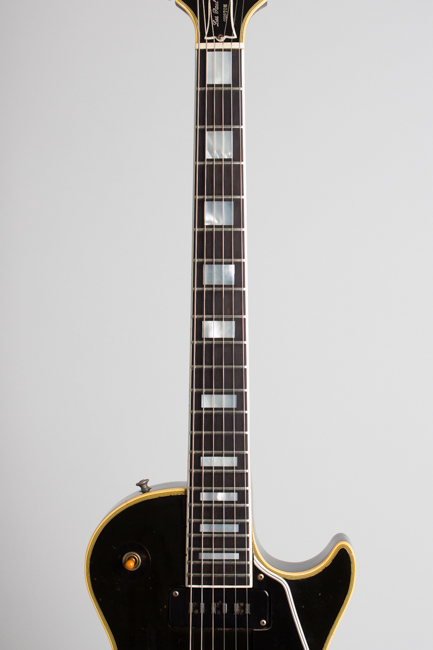 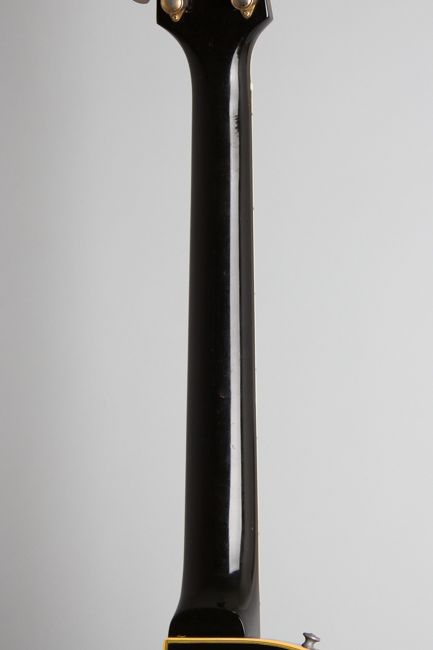 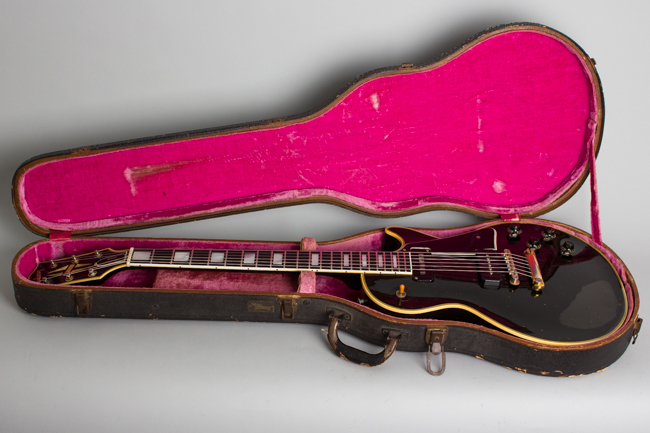 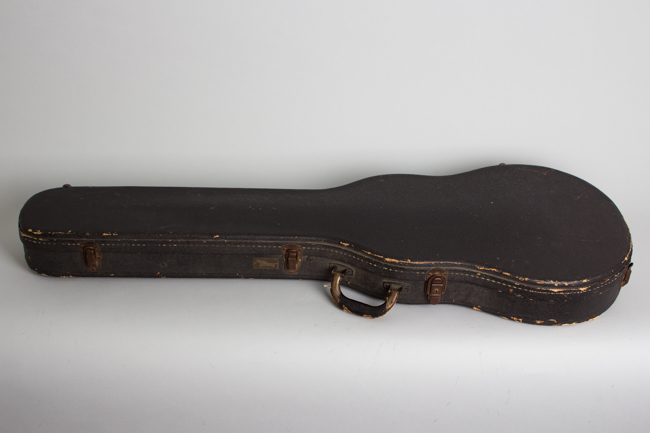 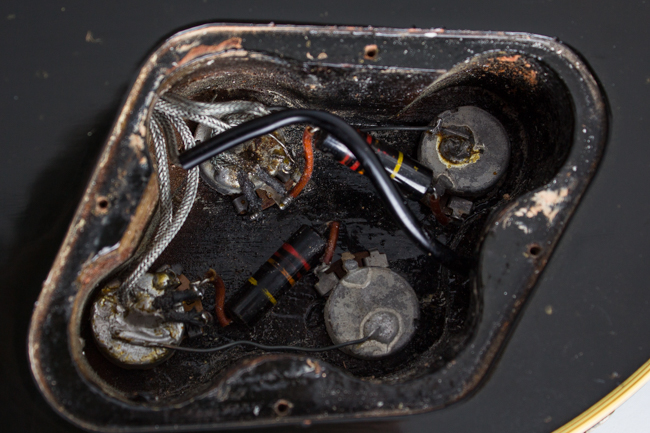 The very striking Les Paul Custom was Gibson's top-of-the-line solid-body throughout the 1950s, a shining "Black Beauty" with gold-plated hardware and deluxe appointments drawn from the company's flagship archtops. This model was introduced in 1954, with direct input from Les Paul himself as to what he wanted his personal instruments to be. Gibson delivered, and Les and Mary Ford performed for the rest of the 1950s on (modified) Customs. This third-year model was made in late 1956 and shows some typical use and minor modification but remains true to Les -- and Gibsons -- intentions.

The gleaming black finish was Les' idea -- he called it a "tuxedo effect" and believed it made the player's hands stand out to the audience especially on TV. The guitar has several other features unique to the Custom. One that is hidden is the carved-top solid body is made entirely of mahogany; unlike the Standard model, it has no maple cap. This was not one of Les' specifications, and while he later claimed Gibson had "screwed it up," this does give the Custom a slightly warmer natural sound, which Gibson thought might appeal more to jazz artists. The appointments are high-end; the fretboard is ebony with pearl block inlay, and the elaborate split diamond motif on the headstock came from the Super 400, Gibson's most expensive guitar. There is multiple binding in the body and headstock and all hardware is gold-plated.

The Custom was the first to feature Gibson's then-new adjustable Tune-O-Matic bridge, mated to the stud-mounted stop tailpiece unit that had previously served as the bridge on the Standard and Junior. It was also the only solid-body to carry the new "Alnico V" staple-magnet pickup designed for the company's high-end instruments, again likely with input from Les himself. This is essentially Gibson's take on a DeArmond DynaSonic, which is what Les had mounted in the neck position of in his personal Standard in 1953-4. Combined with the more typical P-90 in the bridge position, this crisp and powerful pickup gives the Custom a wide tonal range unique among Gibson solid-bodies.

Another feature specific to the Les Paul Custom was thin, low and flat "Fretless Wonder" fretwire, again Les' personal preference. This Custom has been neatly refretted with more standard (but not oversize) wire and is far more friendly to nearly all modern players as a result.

In 1957 the Les Paul Custom was altered to feature three of the new Humbucking pickups, and the unique Alnico V/P-90 pickup mix was discontinued. Somewhere around 1,000 of these first generation Customs were sold between late 1954 and mid-1957. Several well-known players made extensive use of them at the time including R&B/Jazz specialist Mickey Baker and Bill Haley's Comets' guitarist Frannie Beecher. This model remains one of the classiest and sharpest looking solid-body guitars ever designed, and a unique sounding one as well.

This is a nicely preserved guitar overall, cleaner than many for its 65+ years on the planet showing some light general wear overall a couple of minor alterations. It appears in played but not heavily used condition; The gleaming ebony finish shows typical small dents and dings, but only a few go down to the wood below. There is a bit more scuffing to the back of the body than the face, but no large areas of belt-buckle wear as is often encountered. The lacquer overall shows very little of the commonly encountered checking. Except for one dent behind the 7-8th fret area the back of the neck is very clean. There is one small split in the outer binding layer on the upper bass bout.

There is typical wear to the gold plating, as usual most heavily on the ends of the bridge and stop tailpiece where some is worn away from the top from players' hands resting there. All hardware remain original with a couple of exceptions. The tuners have been changed twice; currently they are period (Patent Pending) Grover Rotomatics, as Customs were fitted with around 1959. There are marks indicating Schaller tuners replaced the original Kluson sealfast pegs earlier on, with some minor related touch up to the back of the headstock. The rest of the guitar shows no evidence of any later finish work and blacklights perfectly. The strap buttons are correct period Gibson parts but are devoid of gold plating so we assume them to be replacements.

The electronics appear original except the volume pot for the treble pickup which looks to have been replaced some time ago. The rest of the wiring including the "bumblebee" caps remains intact, with some solder joints redone from the pot work. The neck pickup cover has a couple of spots in the plastic cracked between the poles, with the section between the E and B magnets missing. One of the screws for the backplate is not original, the other three are. Inside the backplate is an old sticker from Pete's Guitar in St Paul Minnesota, a very well-regarded dealer in decades past; the work was probably done there. This establishment was considered one of the world's premier vintage shops but closed a couple of decades back after the founder's death.

The frets are fairly typical 70s style wire, larger than 1950s standard but not 80s huge. They show minimal wear since installation, the ebony fingerboard is clean and the bone nut is newer as well. As noted many modern players prefer such frets to the minimalist originals on this model and playability is excellent. On the whole this is a nice player's examples of a 1950s Les Paul Customs, used but not abused and generally well preserved for its age. Both pickups have plenty of sing and the instrument has a very powerful sound both clean and cranked. It comes in a rather eccentric case; this is a correct period 4-latch brown Les Paul standard case with a black pebbled finish (as seen on Custom cases) applied to the outside. Whether this was a factory emergency expediency to produce a few black cases when the stock ran out or a later dealer or player effort we can't say, but it is a very professional job, and a pretty unique conversation piece! Overall Excellent - Condition.
×