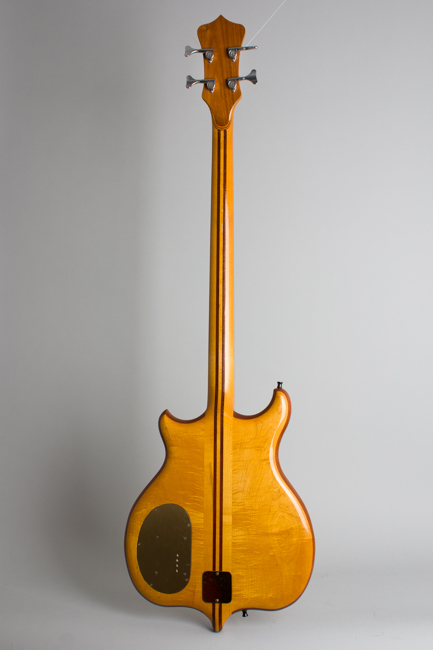 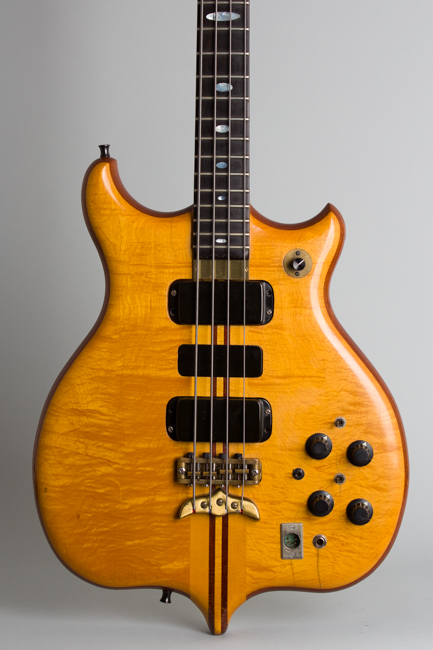 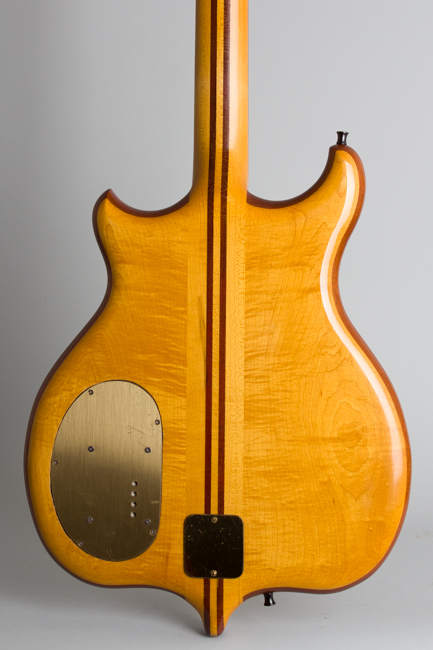 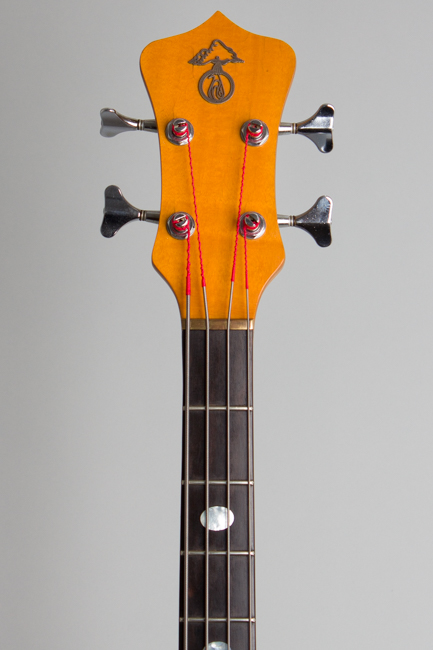 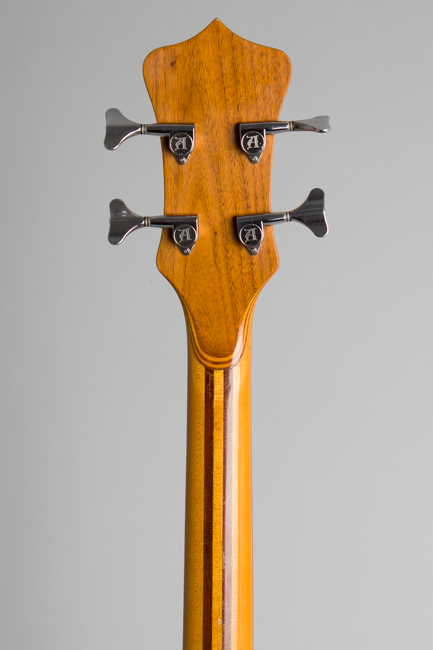 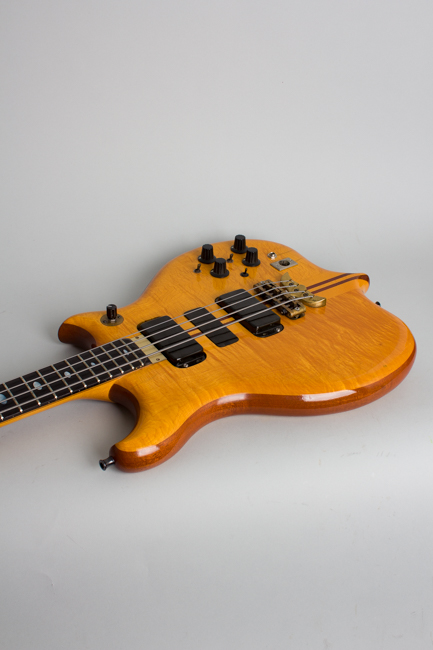 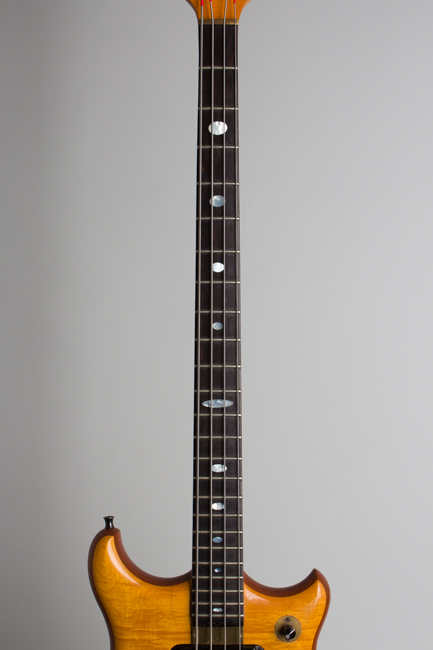 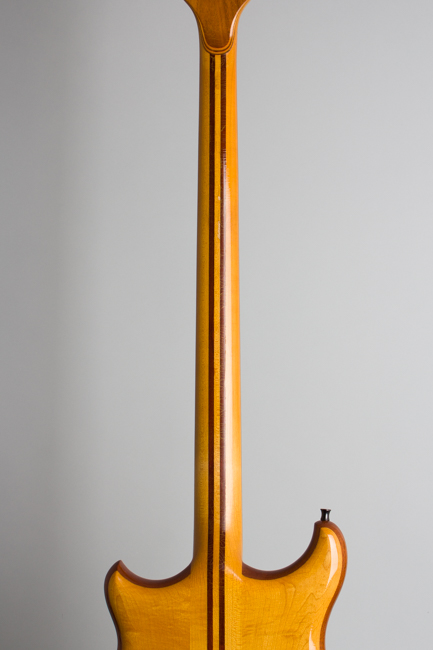 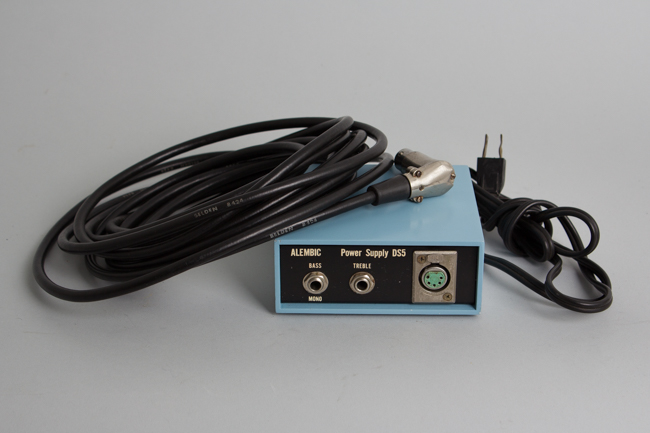 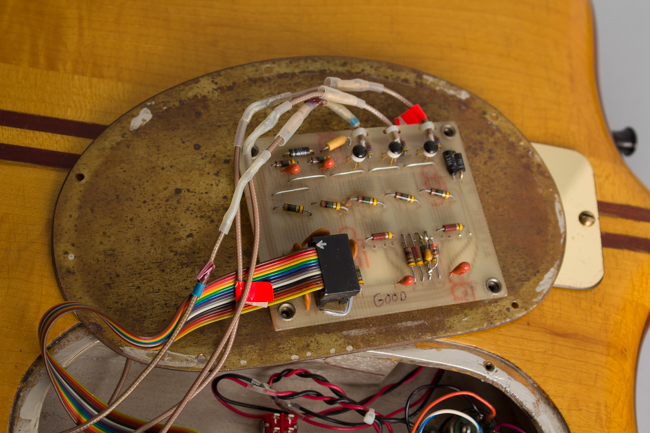 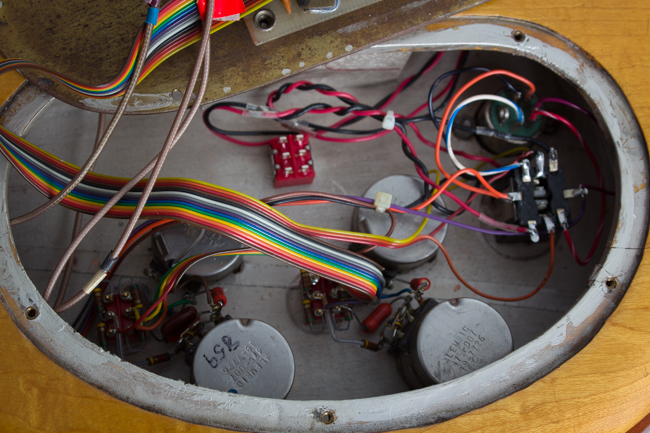 Nothing says low-end high end 1970's like an Alembic bass! This San Francisco operation were the definitive bass trendsetters of the mid-1970's, virtually creating the concept of the high-end electric bass custom shop. The very small company built distinctive instruments with elaborate active electronics and striking multilaminate wood bodies that influenced many larger builders worldwide in the 70's and 80's, with a "natural" look that eventually became almost a period cliche.

When this instrument was made at the end of 1977 it was the largest, fanciest and most "modern' electric bass available and the choice of top professionals including Stanley Clarke, Alphonso Johnson and John Entwistle, among many others. They were very expensive super-high end instruments, built to order in very limited numbers by a small team of luthiers headed up by Rick Turner. At a time when vintage Fenders were just "used" instruments, this bass was the ultimate 4-string status symbol of its time.

The serial number on this Series I model LBI4 is 77-929; Alembic records assign it a "Birthday" of January 3, 1978; the 1977-coded number being stamped before completion. The Alembic-marked pots are coded 7726, so were made in summer 1977. The top and back are figured maple over a mahogany center laminate; The body is not completely solid, but has several internal tone chambers. The 34" scale neck is laminated maple and purpleheart with a mother of pearl inlaid ebony fingerboard. The large headstock mounts Alembic-branded Schaller tuners and the elaborate tooled metal company logo piece on the face.

The electronics are the elaborate twin pickup active rig with a center dummy coil standard to most of these basses. Also typical for Alembic are the very wide range tone controls, including 3-way the "Q" voicing filter switch for each PU. The internal electronics are dauntingly complex looking, but fairly simple in actual operation. The bass runs off a dedicated outboard preamp, which is included, or two 9-volt batteries concealed beneath a metal plate on the lower back. The bridge and other hardware are heavy tooled brass, another '70s hallmark.

Alembic's records indicate their then-distributor sold this bass to Vic Zinn Music in Noblesville, Indiana in January 1978. Vic Zinn was apparently the very first Alembic dealer; earlier basses were sold straight from the workshop. It was recorded as originally made for a customer named Rothschild. The bass was returned to factory for service in 1979 which was recorded as a repair to the headstock laminates and refinish of the peghead area. Evidence of this is minimal today.

This bass plays and sounds exactly as it should, with a thunderous roar when cranked up. We have fitted it with a set of the Rotosound RS66 roundwound strings which would have been most players' choice for this bass in 1978! The original pre-amp and multi-pin cable are included, this important unit has often gone missing by now. While no longer as fashionable as it was in the late '70s, this is still a stunningly beautiful and sublimely crafted instrument, a truly unique and era-defining creation from the sonic alchemists at Alembic.

This bass shows its age in some places, but does not appear to have been heavily used over the last 45 or so years. It shows some fairly heavy finish checking, including minor flaking on the back of the neck but not a lot of actual play wear. The noted factory repair done to the peghead in 1979 appears to have been a delamination of the area on the rear where the strapping joins the neck proper; there is no evidence of any cracks or breaks there.

There are several small surface hairline splits in the maple body, the only notable one in the area behind the jack. Everything is solid and these do not present any structural issues. The phone jack itself appears to have been replaced at Alembic some time ago as there is a second more used looking one in the case, but the actual parts are identical. The only other parts replaced are the pickup selector knob and the strap buttons, which are 1980s black-chrome Straploks.

The original frets are still in fine shape and this bass plays just as expected, with a certain authority that most other 4-strings lack! The pre-amplified sound is very powerful, and can be widely tweaked from a deep roar to a very trebly twang via the elaborate tone system. The bass is housed in a massive custom (likely original) road case in the classic 70s metal-edged style, badged as made by "Hybrid Cases". The very important Alembic branded pre-amp and multi-core cable are included, and there are some cool unused Alembic stickers in the case as well. We do not often see these basses, but they are a true classic of their era and remain as imposing and amazing as they were in the heart of the '70s. Excellent - Condition.
×