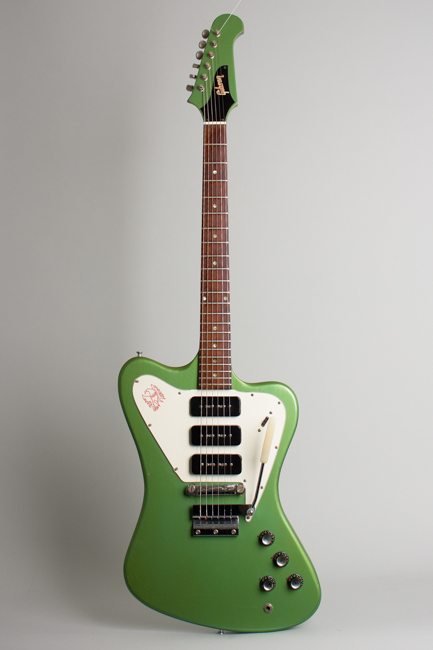 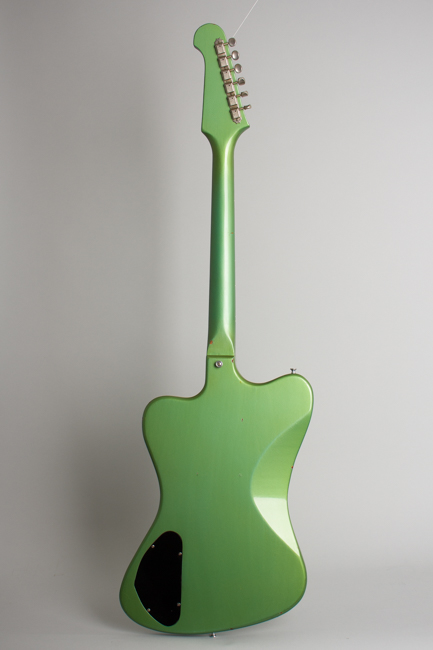 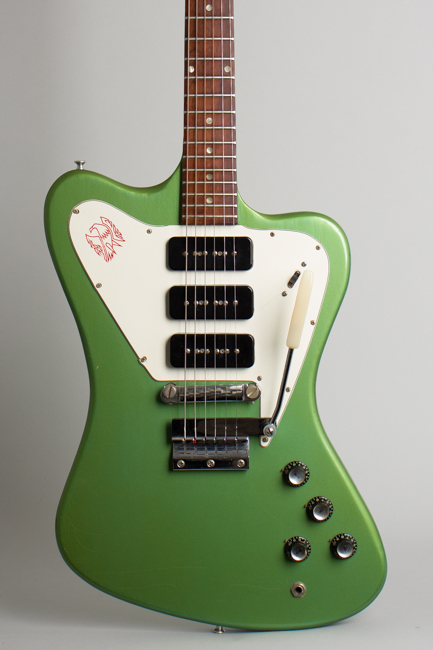 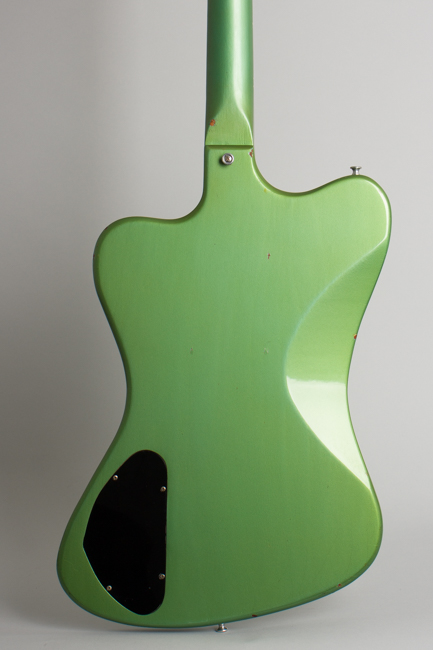 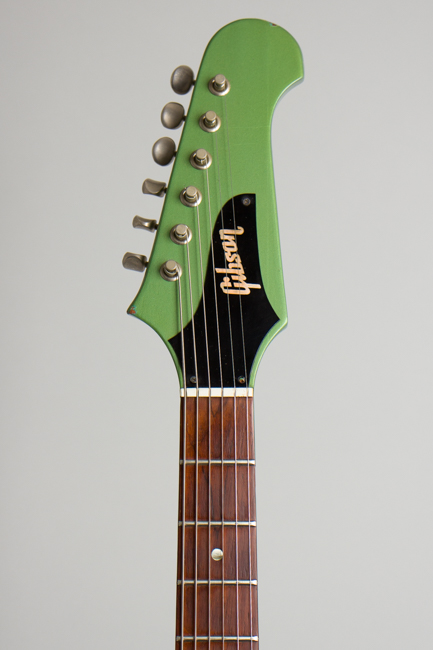 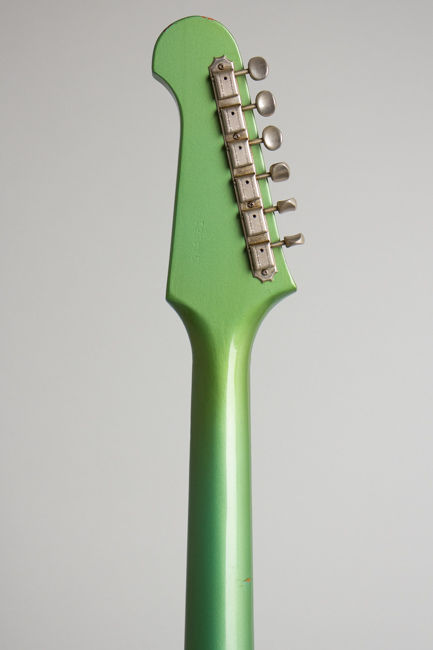 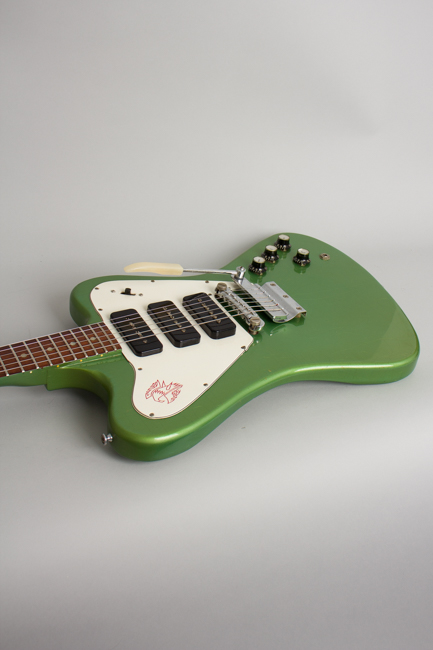 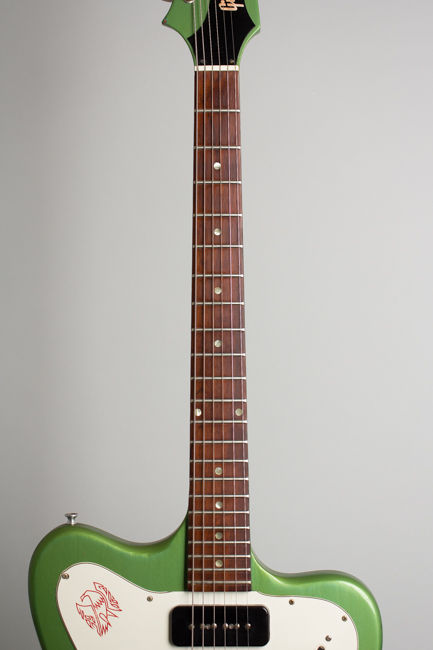 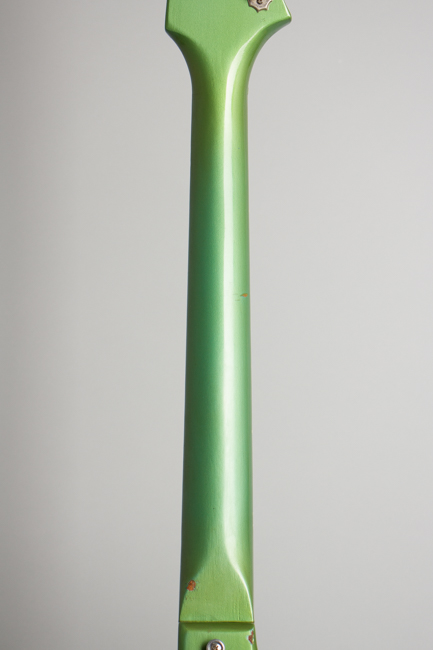 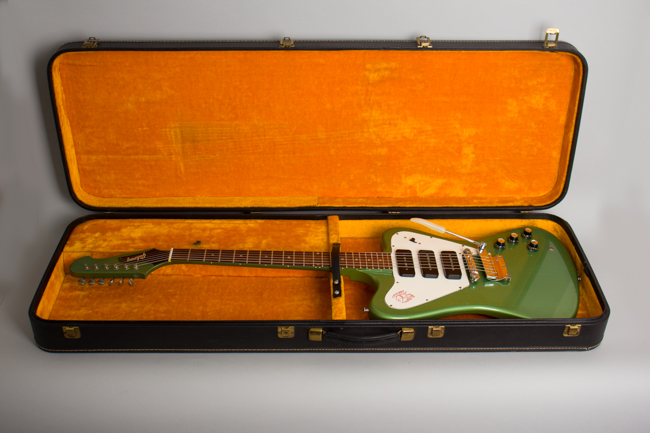 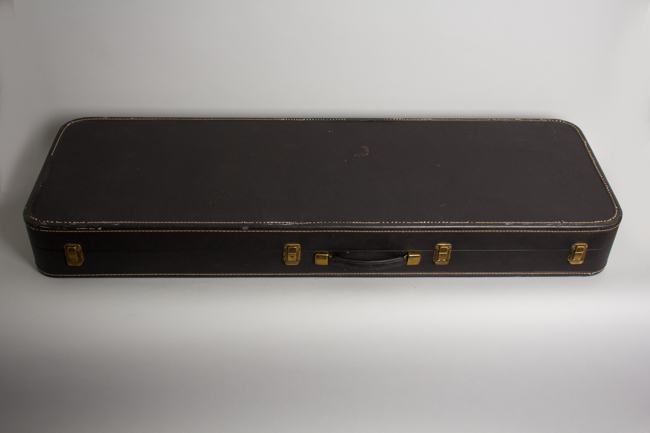 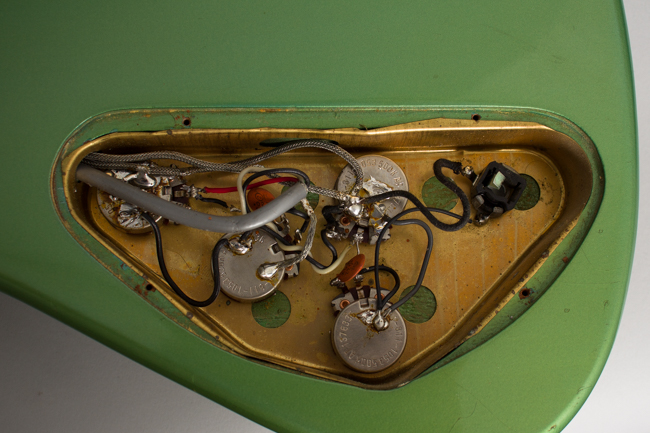 This gleaming green solidbody is a stunningly beautiful example of one of Gibson's less heralded 1960s classics, the second-try "non-reverse" Firebird models. These were lower-priced, simplified versions of the earlier "reverse" body Firebird series guitars. The simplified construction allowed Gibson to lower the retail price to better compete with Fender, which was the original idea behind the series in the first place. Introduced at the summer NAMM show in 1965, these new Firebirds were available through the late 1960s in dwindling quantities, but were never really considered a sales success.

This is a very early example of the new midline-model Firebird III, based on the serial number and features one of the first out of the gate. It is finished in a superbly striking Inverness Green metallic lacquer, one of the rarer of the special custom colors advertised for the line but in practice seldom ordered. Gibson lore holds that most dealers simply ignored the special Firebird color chart brochure Gibson helpfully provided, as they were more interested in selling whatever stock models they had on the wall. "If you've got a red one, they want a blue one" was the complaint, and whatever the truth, the solid color guitars are exponentially rarer than the standard sunburst models. Of these most survivors are red, white or blue making this green example one of the least often encountered. Steve Winwood often used a Firebird V in this finish when playing with Traffic, but few others are known.

Under the metallic lacquer this Firebird III has a body of sculpted mahogany with Gibson's traditional glued-in neck, far simpler to build than the earlier multi-laminate neck-through-body Firebirds. The non-reverse III is particularly distinguished by offering not two but three plastic-covered P-90 pickups, an unusual combination that Gibson had not used before on a solidbody. They are wired in the typical Gibson 3-pickup layout, with the center switch position being the bridge and middle out of phase. With P-90's this gives a unique tone, sort of a "fat Strat" effect.

Typically for 1965 this 'bird mounts a mixture of chrome and nickel plated hardware; most is chrome including the "short" Vibrola unit with a plastic-tipped handle and the stud-mounted bridge; the studs themselves are nickel. The original tuners are a nickel-plated single Kluson Deluxe strip unit Gibson used only on these and the Epiphone solidbodies built around the same time. The knobs are the older style with a metal cap used mostly from 1961-67, not the later "Witch Hat" type. The neck is narrower at the nut than earlier reverse Firebird necks, but still has a nice feel not quite as insubstantial-feeling as some period SG necks.

The visible pot codes in this guitar date to the 36th week of 1963, which indicates they had been in stock for some time before wired into a guitar! The serial number starting with 344- indicates shipment in the latter part of 1965. This is a VERY early example of the new model, which appears more carefully built then the sometimes slapdash-feeling later 60's 'birds. Just over 1000 FB-III's were shipped out of Kalamazoo that year, but the bulk of them were likely the original style Reverse models, including the transitional "platypus" oddities sold in summer '65. This would be one of only a handful ever sold in this finish in any case. The original hangtag still with the guitar has FB-III SPECIAL stamped in ink and the matching serial number added in pen.

Aside from its killer looks this is a great-sounding guitar, with powerful P-90 pickups that really growl when cranked. The center position is an interesting sonic revelation, the traditional P-90 sound with a bit of the phased "mid-scoop" common to Stratocasters but not as cliched. The "non-reverse" Firebirds used to be discounted in Gibson history, but have found a growing cadre of enthusiasts in the 21st century, enough for Gibson to re-issue the model. They remain completely distinctive guitars unlike any other in look or feel. Extremely light, fast, and super stylish, this rare custom-color Firebird III is an exceptionally rare example of this oft-underappreciated Gibson model, a standout in any crowd and an unrepentant rocker's guitar.

This is an extremely well-preserved 'bird overall, all original showing some minor play wear and maintenance but no major damage or repair. There have never been any headstock or control cavity cracks as are common with these instruments. The finish shows some wide checking and small dings, chips and finish rubs in a spots, mostly on the back and back edge. The painted edges of the fingerboard have some small chips aw well. Overall the striking metallic green finish is very well-preserved with no major loss and is not heavily checked or yellowed, as some are. This is NOT an aged Pelham Blue finish, which often greens heavily, it is a relatively unfaded Inverness Green. This is a much rarer hue, although really ALL custom color Firebirds fall into the very rare category!

All hardware is original and complete, including the vibrato arm and the oft-missing screw and nylon bearing washers. The pickguard shows some typical shrinkage with pulling at the screws but only two showing any cracking, most notably in the spot above the bridge pickup. There is some sort of repair to chipping just around the 3-way slider switch, and a deep scratch above it. Other than that the pickguard shows just some typical scuffing, as do the pickup covers. The painted-in bird emblem is extremely well preserved, much clearer than many.

The neck angle on this early 'bird is excellent, and the vibrato is actually quite useable, which is often not the case with later examples. The original frets show some very minor wear and still have plenty of meat to them, and the guitar plays extremely well. Overall this is a GREAT looking and sounding Firebird, resplendent in the seldom-seen Inverness Green livery. It is complete in the original yellow-lined HSC, which is still the older deeper design intended for the older Reverse 'birds, another indication of this being one of the first new models shipped. Overall Excellent Condition.
×