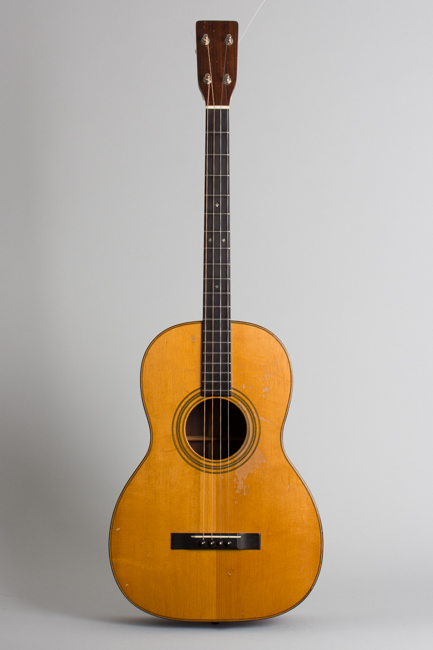 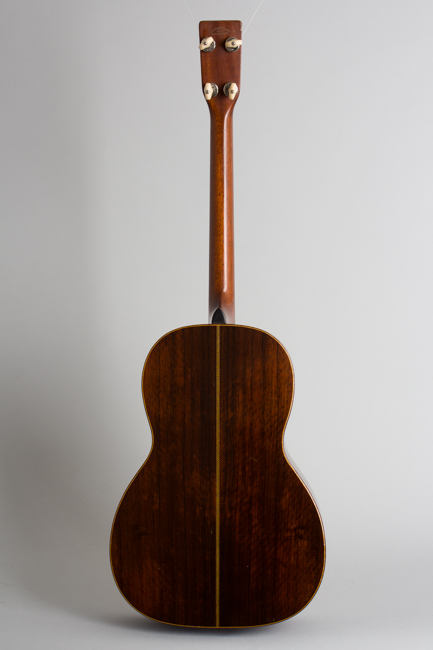 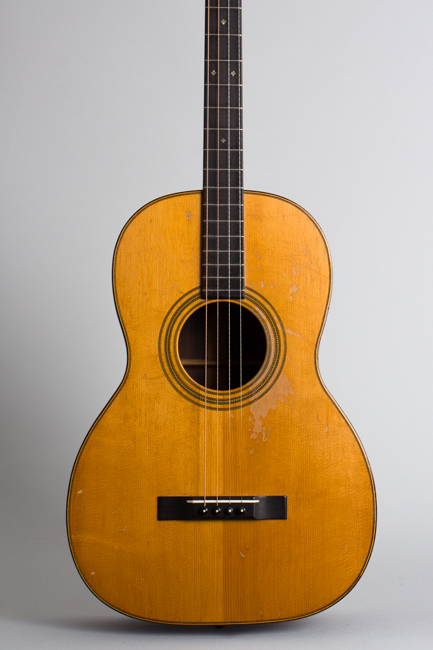 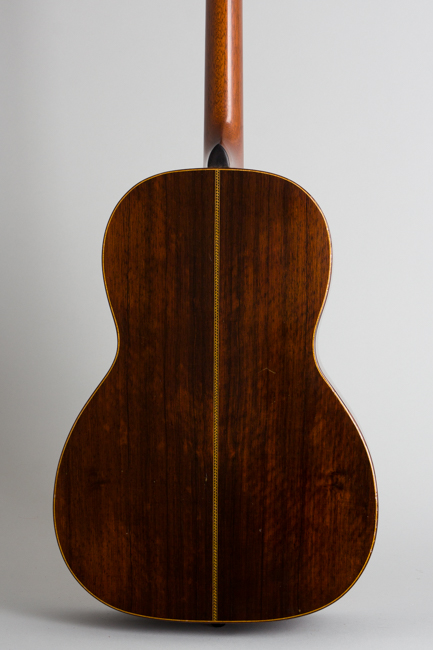 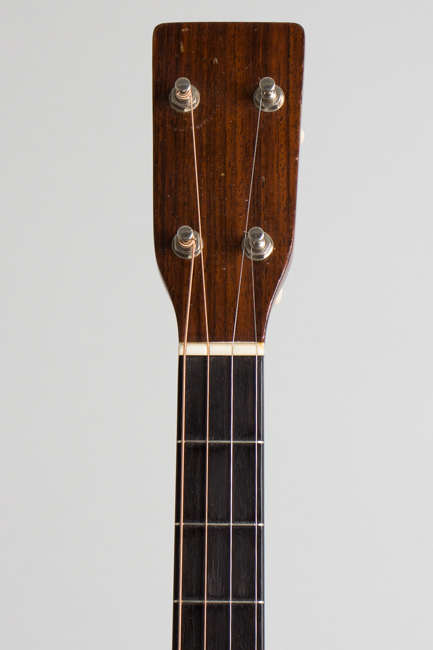 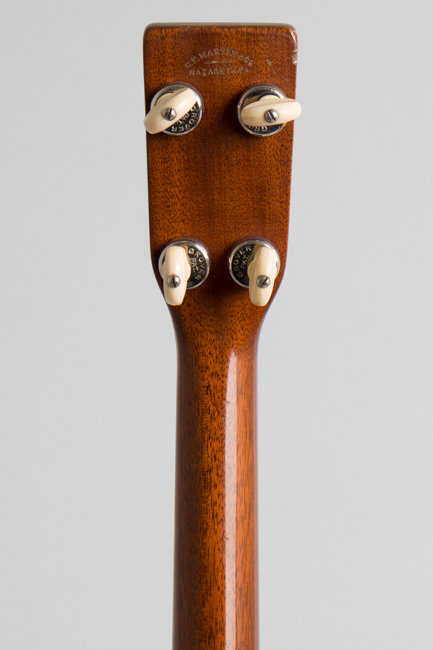 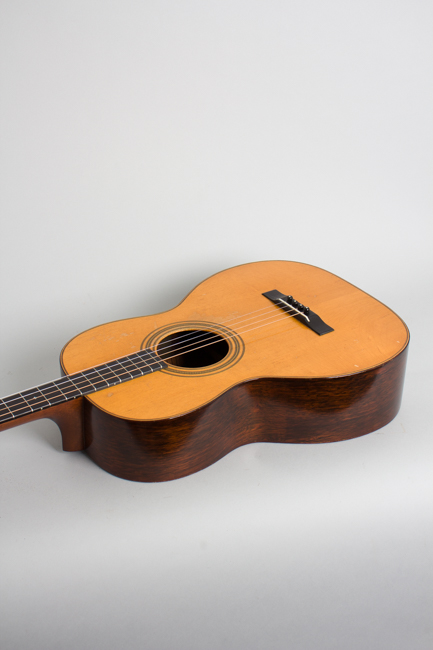 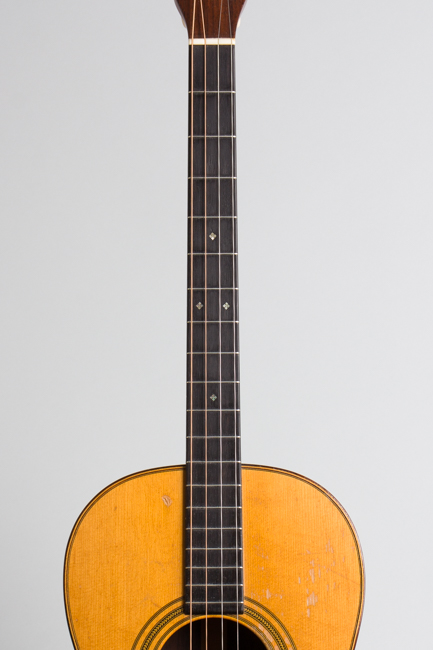 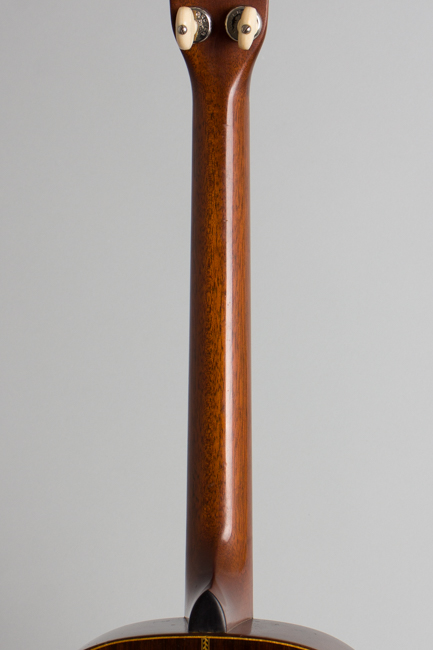 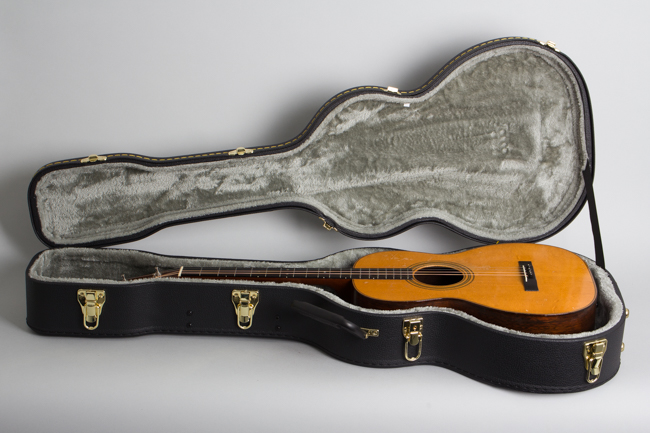 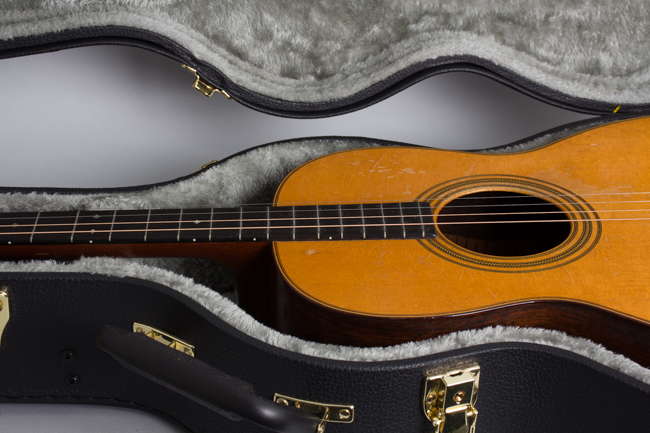 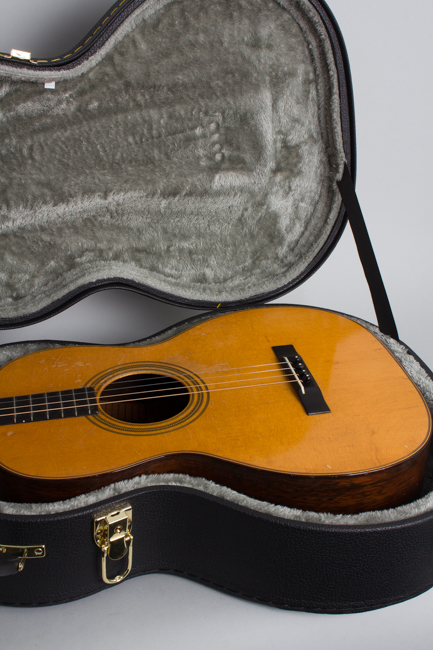 At the time this instrument was designed and built nobody quite knew what the tenor guitar ought to be. Conceived in the 1920's for tenor banjoists seeking a double for the guitar's mellower tone, tenor guitars were initially cast as smaller bodied instruments to give them a brighter, higher voicing. What most players wanted, however, was pure volume and power so larger bodied instruments quickly superseded the first small tenors like this 5-21T.

In the late 1920's Martin produced small numbers of different tenor models, trying to get the formula right. The 5-21T mates Martin's smallest size 5 body to style 21 rosewood specs with a 22 5/8" scale four string neck. This size was originally a "Terz" pattern from the 19th century; in the "modern" era it mostly appeared as the 6-string model 5-18, built in small numbers for much of the 20th century. When Martin inaugurated 4-string tenor guitars, the 5-21 was the initial rosewood model listing at $55. It carries standard Style 21 features on its small body, with a slim U-profile 4-string neck.

Style 21 instruments often feature interesting figured Brazilian rosewood, as Martin preferred the straightest grain for high-end guitars. The bookmatched back on this one has some plainly visible cross grain saw marks giving it an almost quilted look, especially above the herringbone back strip. The tight-grained Appalachian spruce top features a herringbone soundhole inlay and rosewood binding. The rosewood-faced headstock has no Martin logo on the front (not used until the 1930s) and "no-tab" Grover patent tuners. The ebony fingerboard has bar frets and small slotted diamond pearl inlay at frets 5, 7, and 10.

The 5-21T was one of Martin's shortest-lived models with just over 400 shipped, nearly all in 1927 but the final 50 in 1928, of which this is one. Apparently dealers initially ordered them in some quantity but then never re-ordered, as after that the model was never revived. The larger, louder 0-18T introduced in 1929 became Martin's go-to tenor guitar, and these small body tenors were mostly forgotten except for the all-mahogany Style 17 student models. This 5-21T is a dainty feeling guitar but plays well and has a lovely bright but still mellow sound, offering a range of sonic possibilities.

This beautiful if diminutive tenor shows some cosmetic wear but is very solid and an excellent player. There is finish wear overall, most notably heavier pickwear to the top below the strings and around the soundhole and some random scratches, dings and dents. There are a couple of deeper "case lid bites" to the top as well. The rest of the finish shows less wear, with mostly minor dings, scuffs and scratches.

Structurally the guitar is excellent with no notable cracks or repairs. The nut and saddle look newer but all else is original including the full-height ebony bridge and small maple bridgeplate. The original frets show some very light wear and this is an excellent player with a sweet and full tenor sound. Overall Excellent - Condition.
×