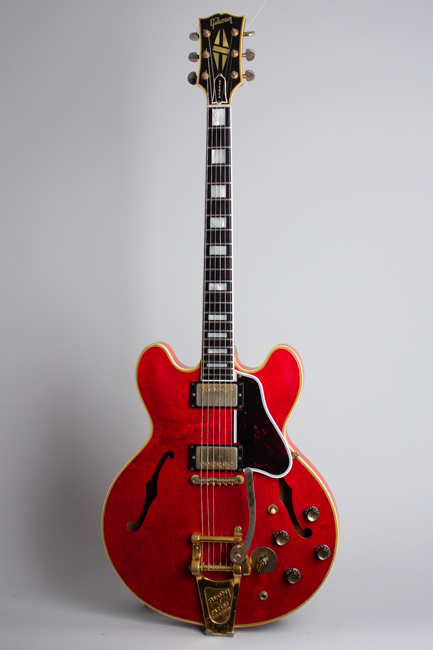 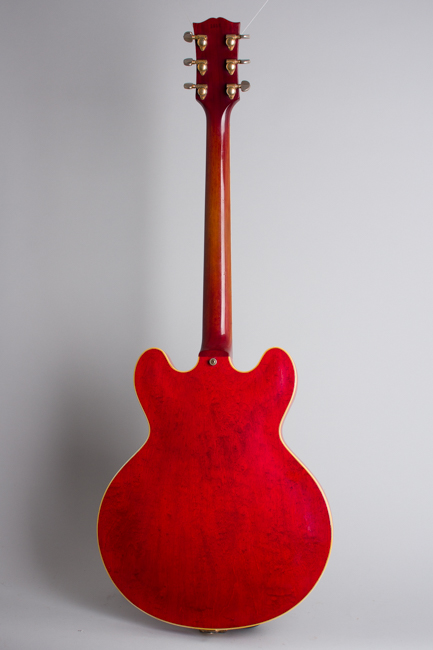 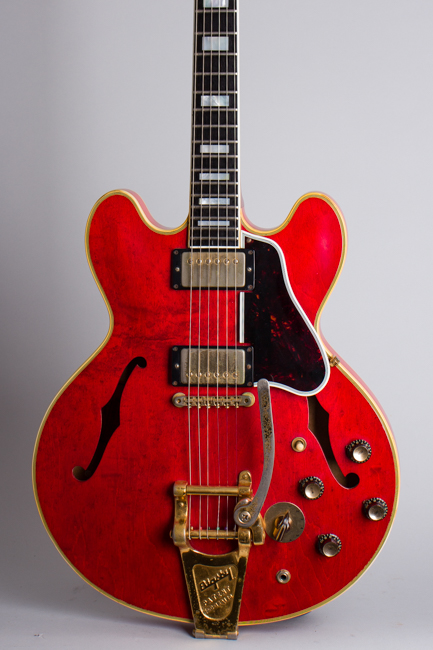 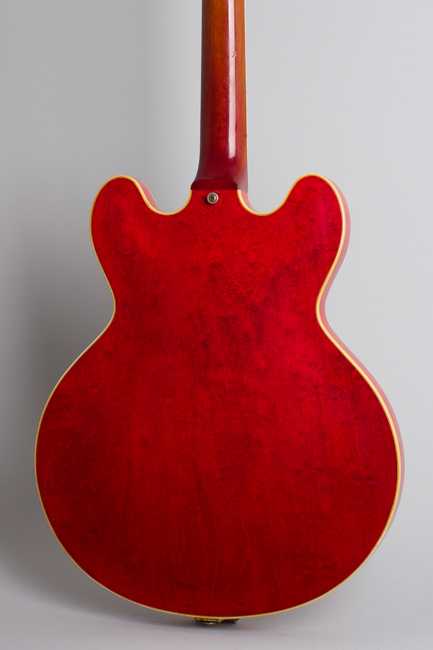 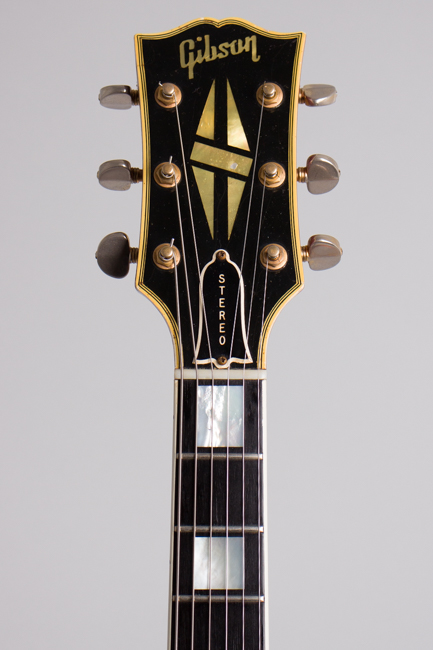 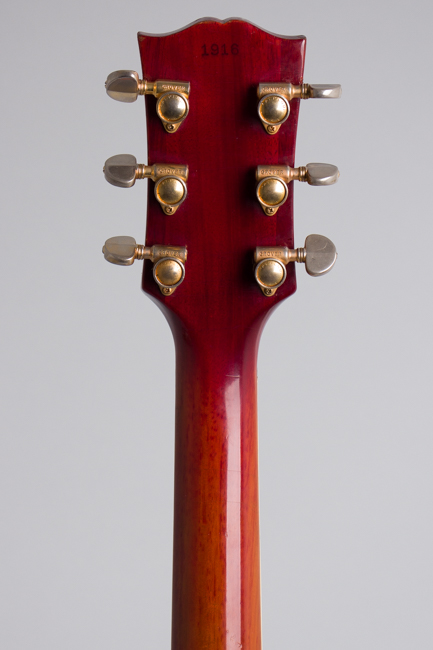 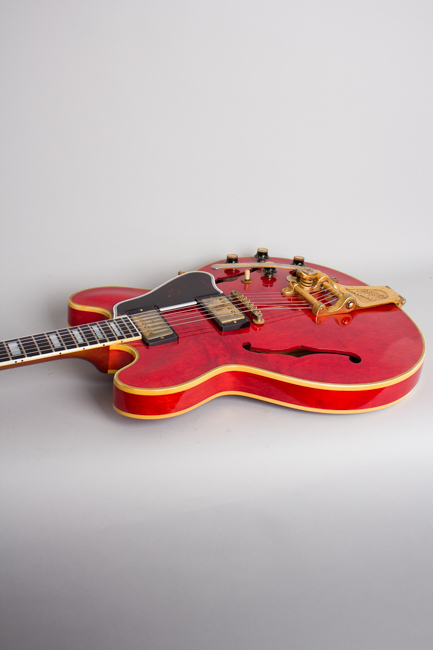 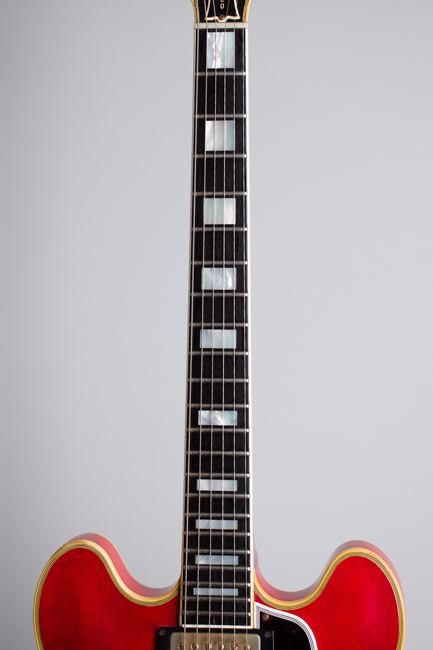 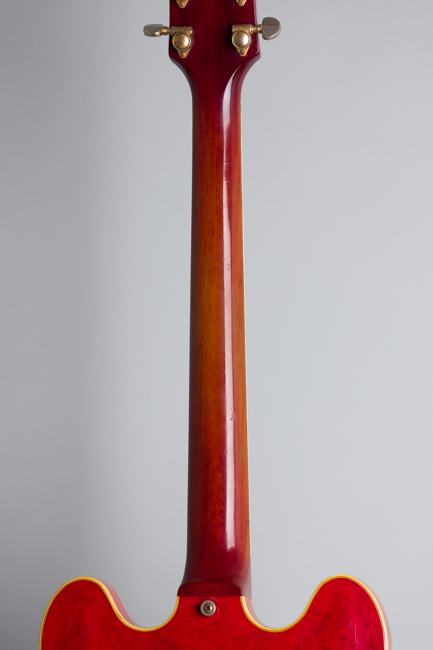 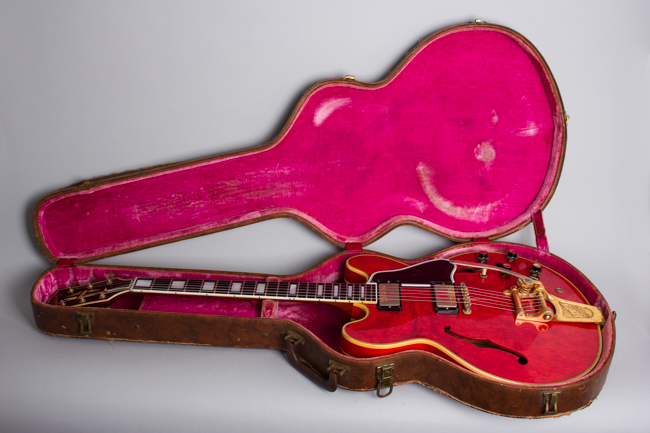 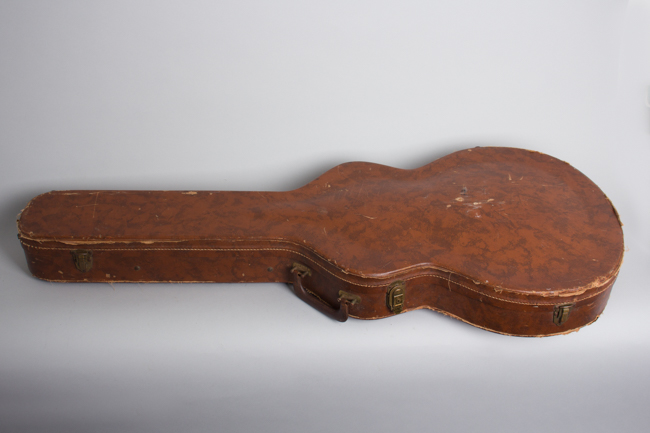 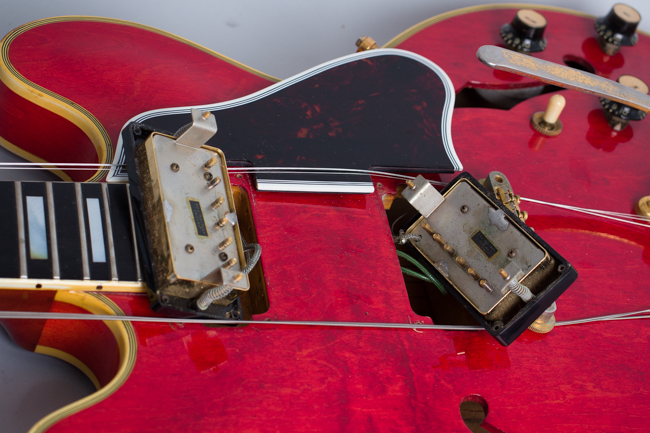 The ES-355 was the flagship, top end model of Gibson's most successful late-1950s innovation -- the semi-solid electric guitar. Following quickly on the heels of the ES-335, the 355 brought high-end features to the line including a bound ebony fingerboard, pearl block inlay, multiple bindings and gold plating topped off by the Super 400-style split-block headstock inlay. The gold Bigsby vibrato was a standard fitting when the guitar was introduced in late 1958; By the time this one was made it was usually a special order feature, as the model came stock with Gibson's new (and to some heavy and awkward) side-pull trem also fitted to period Les Paul/SGs.

This early 1961 guitar has two beautiful "Patent Applied for" humbucking pickups with the Stereo/Varitone wiring that was a common option on the model at the time. The Patent # pickups were just being phased in at the time, but the gold-plated guitars were slower to get this then-unnoticed change, so PAF's are usually still found on this year 355s. The stereo wiring routes the pickups to different sides of a split cord allowing the use of two amplifiers, or more commonly two channels of the same amp. This creates a sort of pseudo-stereo separation, allowing different tones or effects on each pickup.

The Varitone knob is a six-position choke that was designed to help players (originally primarily country pickers) get a brighter, thinner sound out of Gibson's typically thick-toned humbucking pickups. This system was introduced with the ES-345 model, supposedly at the behest of some Nashville players. While these features were later regarded by some as gimmicks and have now often been removed, players at the time seemed to like them. The more expensive "SV" version of the 355 consistently outsold the mono throughout the '60s, and some well-known players (including Freddie King and Hollie Tony Hicks) got signature sounds out of the system.

The brilliant cherry-red finish on this guitar was one of Gibson's flashier new looks for the 1960s, replacing the natural blonde of the 1950s. Other 355 features include the "no-wire" gold ABR-1 bridge with metal saddles, Grover Rotomatic tuners and bound tortoise celluloid pickguard. This particular guitar has TWO serial numbers, a quirk of being finished out just as Gibson was switching over to the new 1960s numbering sequence. A very early four-digit serial number (1916) is impressed on the back of the headstock, while an one of the last old-style "A" numbers (A-36080) is ink-stamped on the label. Both of these indicate the instrument shipped out in February 1961, one of only 174 Stereo 355s sold that year. The neck has the rather flat round-backed profile common to 1960-61 Gibsons.

This guitar has seen some use but remains in excellent condition and as always is a very versatile player's instrument. Designed originally primarily with jazz and country players in mind, the ES-355 has long been considered one of the classic electric blues and R&B guitars. Virtually from its introduction it has been standard equipment for many of the seminal players in that genre, most notably B.B. King and Chuck Berry. This one is a truly beautiful example, ready to play "Everyday I Have The Blues" everyday, or pretty much anything else for that matter!

This beautifully original guitar has seen some play time over the last 60 years but remains a lovely original example, played in but without any really major wear. The cherry finish retains great rich color with minimal fade, showing only some light typical checking and small dings and dents overall. The back of the neck is very clean, with several small dings and dents and some typical finish fading from hand contact.

The gold plated original hardware shows the most wear being partially worn away on the pickup covers, bridge ends, tuner buttons and especially the Bigsby handle. The gold paint on the Varitone knob has worn down as well. The tortoise celluloid pickguard is the only non-original part; it is a very finely made repro. The original is included but is showing early signs of celluloid deterioration so was removed to prevent it damaging the finish.

The PAF Pickups are untouched, and the electronics are still in the original Stereo/Varitone configuration, with two-channel output requiring a dual-tip cord and the 6-position Varitone engaged and functional. The pickups are out of phase in the center position, which is the factory wiring on these stereo models. Many of these guitars have been rewired to mono in the past, but this 355 is still wired as it left Kalamazoo.

The original large frets have been crowned down a bit but show no subsequent wear, the fingerboard is very clean as well. This is simply a lovely example, an excellent player still residing in the original 1950s style brown HSC. This shows some wear but is still fully functional. Overall Excellent Condition.
×