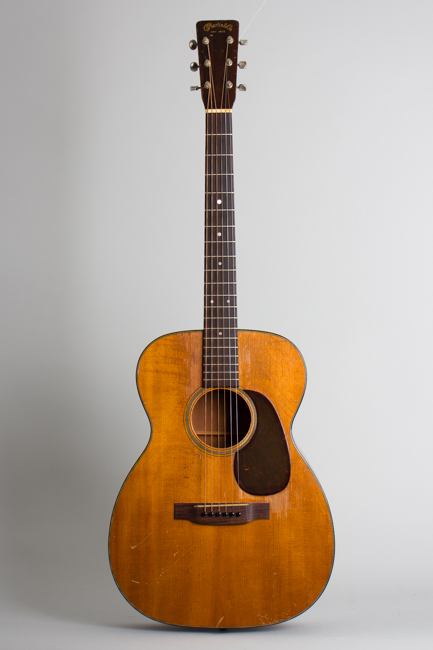 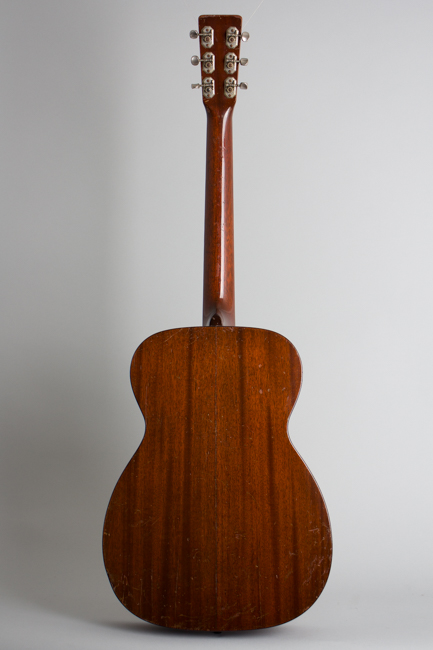 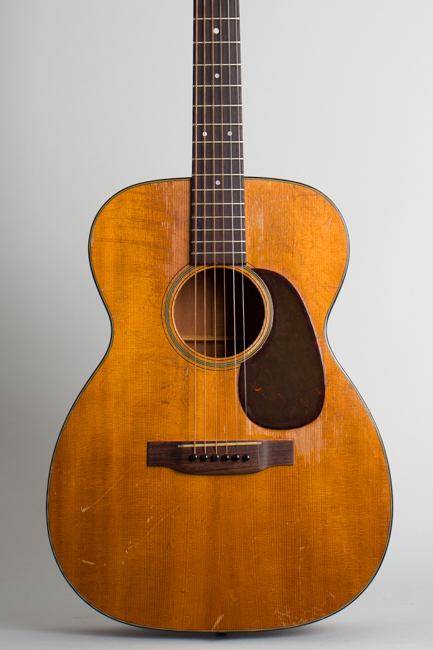 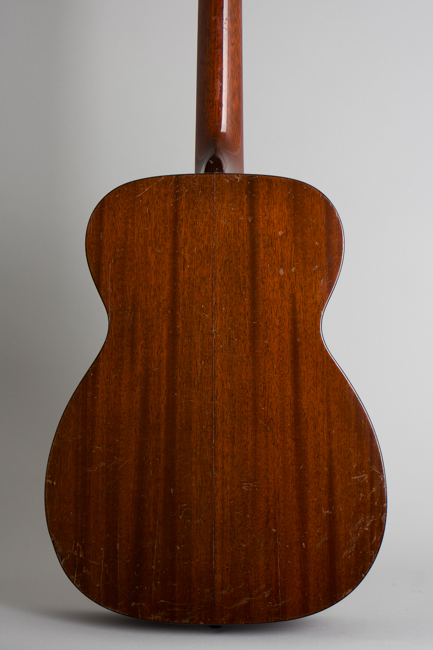 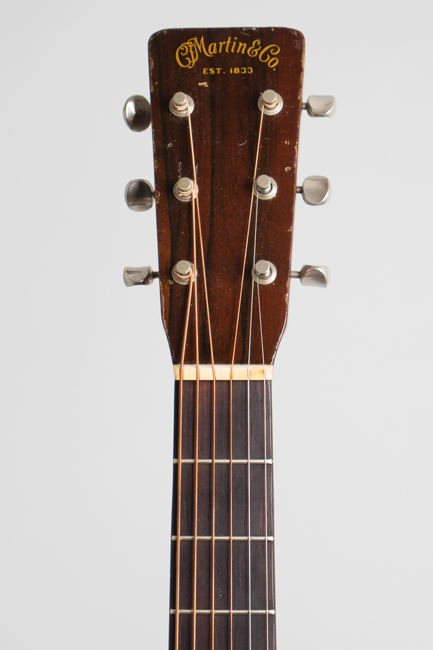 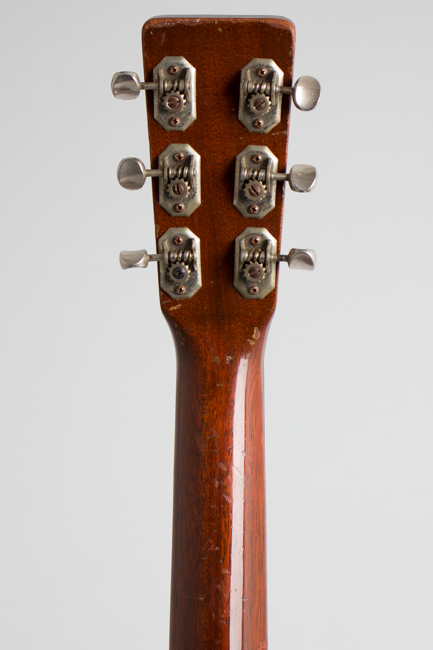 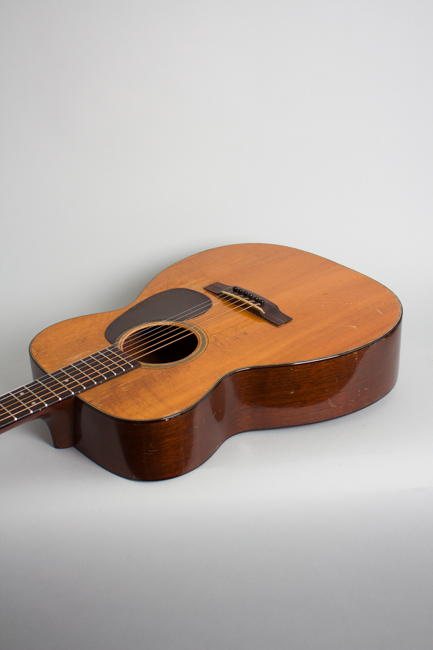 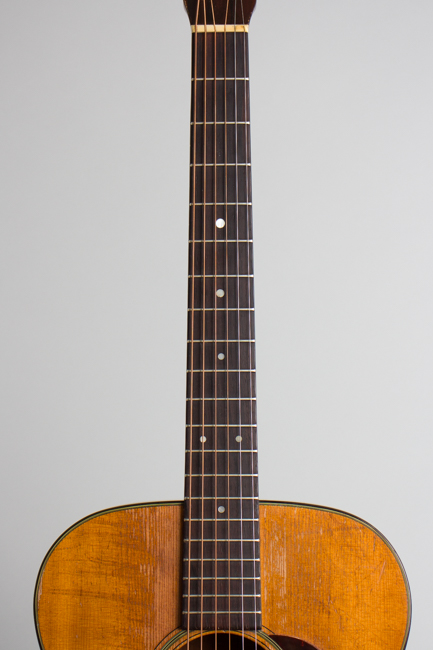 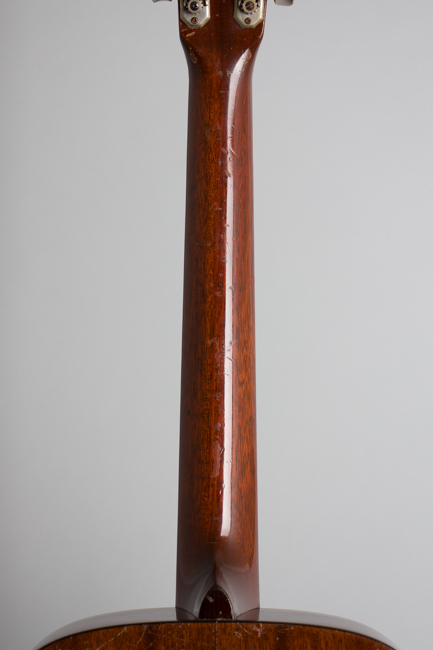 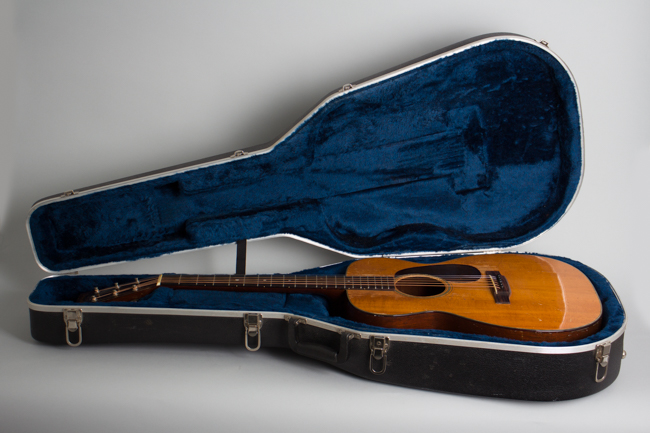 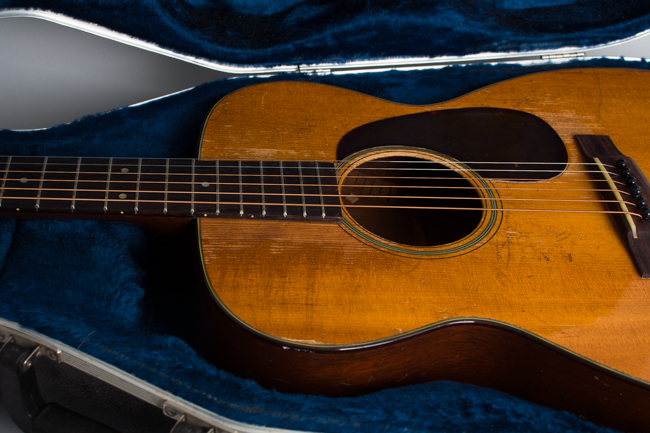 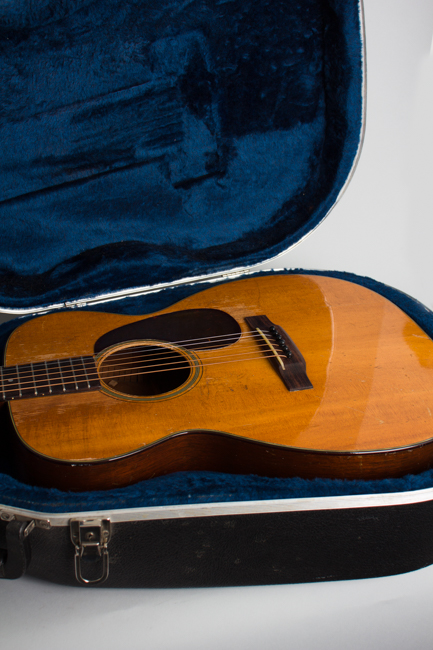 This 1950 00-18 has seen some kind of life over the past 70+ years, and has the scars to prove it. There is tons of play wear but a killer vibe to go worth it, putting this one in "real relic" territory. While we all love a clean old Martin, these heavily played ones often have a sonic advantage, and lots of stories to tell.

The 00-18 is not one of Martin's rarer creations, but to many players and Martin fans constitutes one of the company's most beloved combinations of wood, wire, and inspiration. This is not a flashy guitar; the trim is discreet with tortoise celluloid on the body edges and a simple multiply sound hole ring. In classic Martin style, the elegant understatement speaks for itself.

The 14 1/4" light mahogany body makes for a very responsive guitar, with a nice mix of depth and clarity to the sound. This example was built in mid-1950, one of a total of 525 000-18s shipped that year. It has typical period features with tortoise celluloid binding and pickguard, a rosewood belly bridge, and an ambered top finish over some nicely grained spruce. The tuners are the postwar open back single-unit Klusons with the large baseplate typical of the period.

While not a particularly expensive guitar by Martin standards, listing in mid-1950 at $70.00 (plus case) the 00-18 still represented a substantial investment to many players. Despite its smaller size and lack of flash, the 00-18 remains a fully professional instrument popular with pickers of many styles, and one of Martin's most versatile and timeless classics. Somebody got a lot of use out of this one, and it has lots more music in it still.

This 00 is a very well worn in example, a hard-working guitar that still remains substantially original, sounding and playing excellent. The finish overall shows considerable pickwear and a varied collection of dings, dents, scrapes, press marks and small areas of loss, but no signs of overspray except a bit at the heel related to a neck set. The top shows pickwear through the lacquer in front of the bridge, on either side of the fingerboard extension, around the sound hole and around the pickguard and dings, scrapes and scratches practically everywhere else. The back and sides are fairly heavily worn as well; the back of the neck has mostly smaller dings and dents.

There are several top cracks, including two sealed pickguard cracks, one at the "B" string position and another in the narrow space between the pickguard and the binding. A third sealed grain crack extends from the bottom edge of the top to an area about a quarter of an inch from the treble side bridge wing. The top also has a short grain crack at the apex of the lower bout on the treble side. There are larger spruce cleats underneath reinforcing most of these areas.

There six sealed grain cracks extending from the bottom of edge of the back, some are short and some extend as much as four inches. There is a repaired crunch, with an adjacent wrinkle in the back binding, at the treble-side edge of the back. Finally, there is another sealed grain crack running from the waist, also on the treble side. The only crack on either rim is right next to the end pin, with a visible repaired crack in the end block as well. Both rims and the back of the neck also show many scratches and dings, but no other damage.

it has had a cleanly done neckset and the bridge is a modern replacement with a later style short saddle. The original small maple bridgeplate is intact and unaltered. The fingerboard has been trued and refretted making for an excellent player. There is a small rosewood shim placed under the fingerboard extension. This is a very lightly built guitar compared to later examples, with a bright ringing sound still with considerable depth. It does have a great vibe; as old-timers like to say "there's a lot of songs in this one". It would make an excellent recording, writing, or performance instrument and is ready to gig, housed in a molded Martin hard shell case. Very Good + Condition.
×