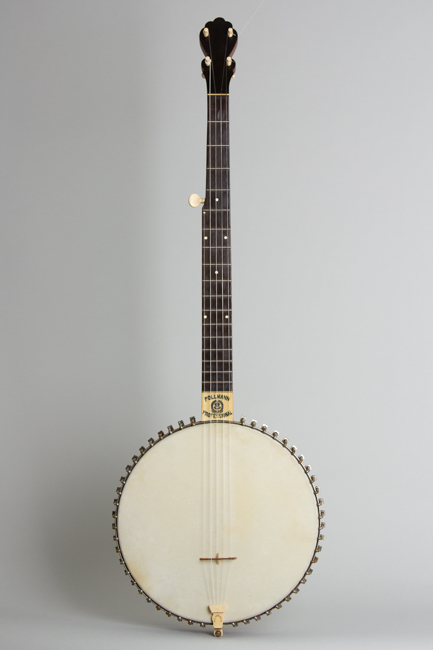 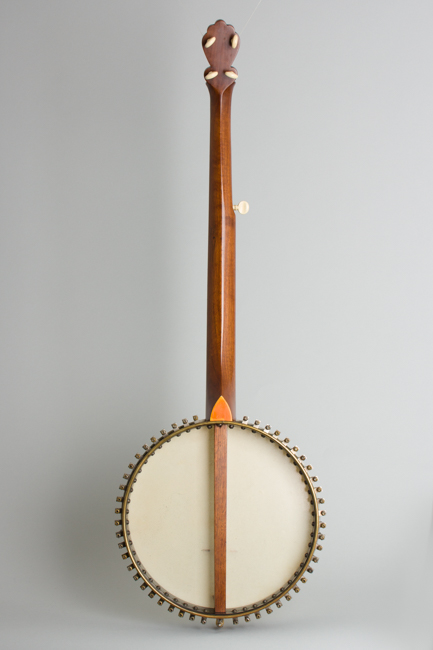 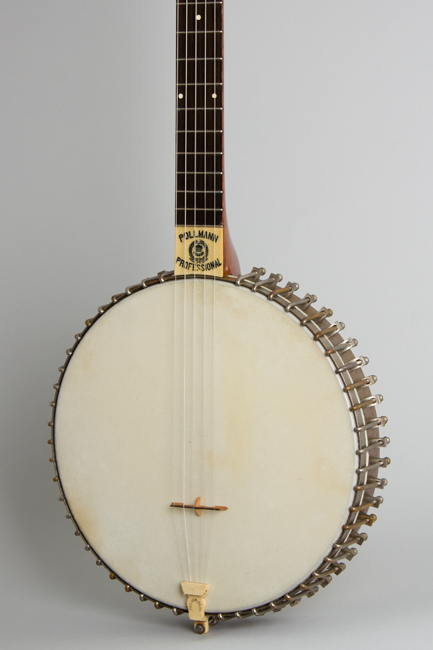 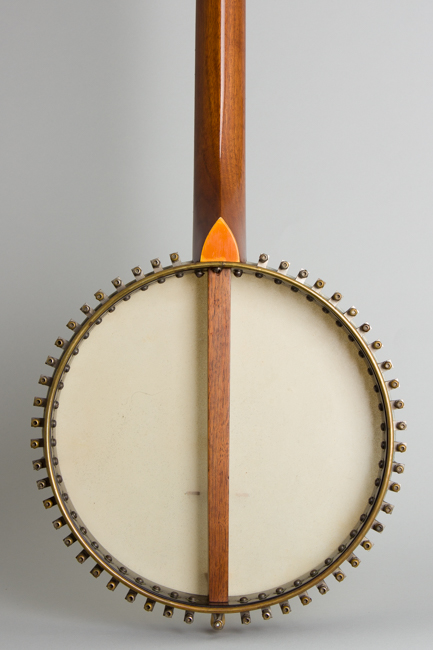 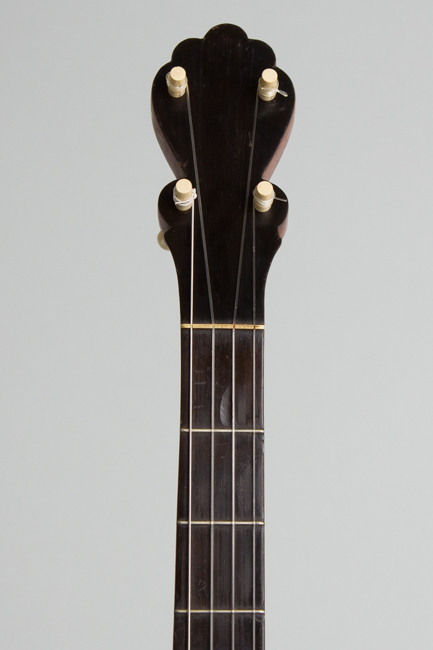 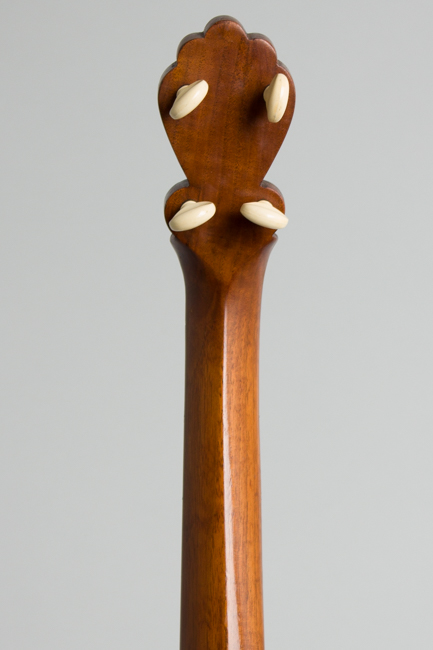 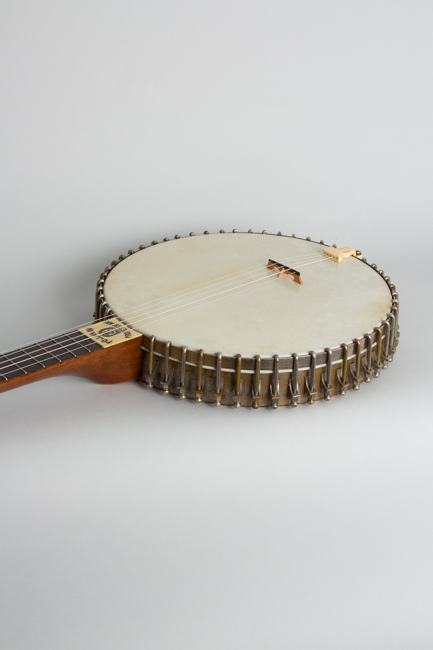 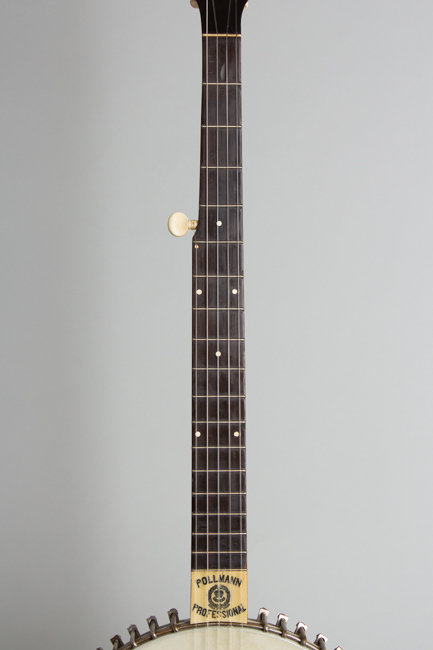 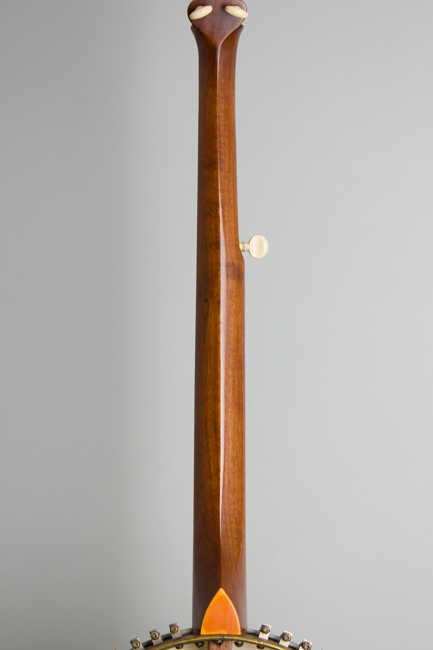 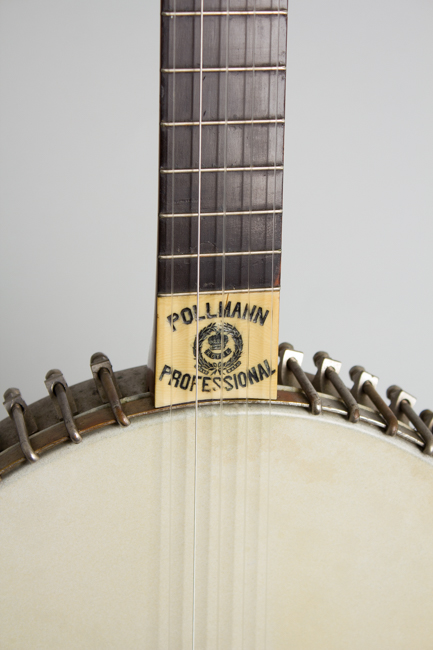 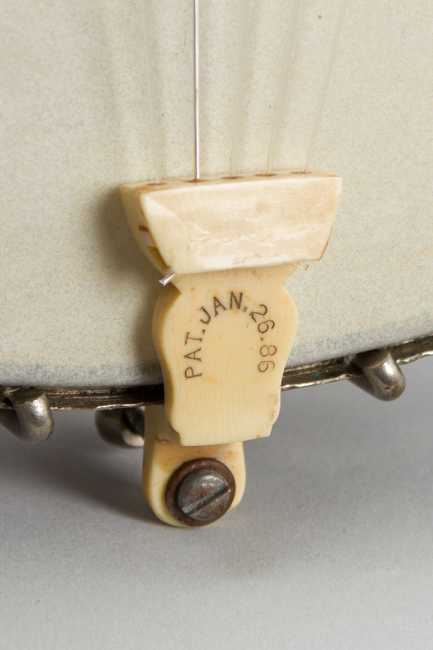 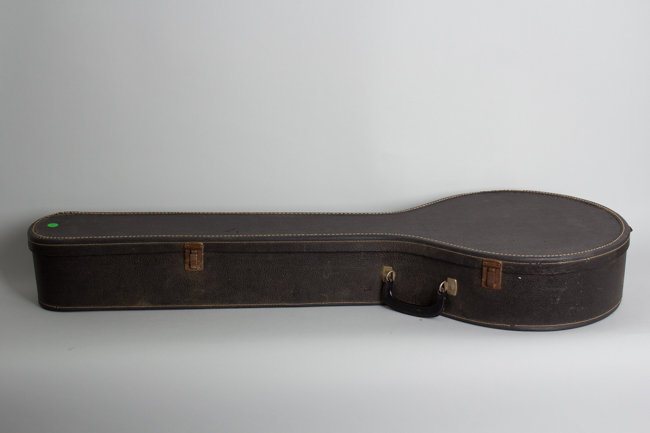 August Pollman was a New York based musical goods dealer in the late 19th century, now most remembered for his eccentric "Royal Mandolin Banjo", an unusual crossbreed of a five-string banjo-style neck on a flat-topped wooden body. Beyond these he also sold a full line of instruments, including more conventional a 5-string banjos.

This is a fairly standard late 1880s-early 1890s pattern instrument, with a spunover rim surrounded by what to the modern observer might seem an excess of brackets. There was a time when the retail price of the banjo was directly tied to the number of hooks employed! The inside of the rim is ebony finished, the neck is natural. The very thin veneer ebony fingerboard has small dot inlay and a large celluloid piece adjacent to the body with "Pollman Royal Professional, Trade Mark" incised and darkened; there are no other markings. The tailpiece is a lovely ivoroid design patented January 26, 1886, the tuners are a matched set of white composite imitation ivory. All these components appear original to the banjo.

This is a nicely preserved instrument considering its age; the combination if the long 28" scale and large 12" rim giving it a firm but rounder tone than some. These features combined with the celluloid tailpiece and tuners mark this as a gut, Nylon or NylGut suited instrument ONLY, we would absolutely NOT recommend stringing with steel. These same features also make it better suited to more 19th century-appropriate lower tunings than modern Bluegrass G. This is a nice playable historic piece within these limits.

Overall length is 38 in. (96.5 cm.), 12 in. (30.5 cm.) diameter head, and 2 1/4 in. (5.7 cm.) in depth, measured at side of rim. Scale length is 28 in. (711 mm.). Width of nut is 1 5/16 in. (33 mm.).
This banjo is in surprisingly good playable condition for being something like 130 years old. It has seen some restoration decades ago but nothing that detracts from its original character. The finish on the back of the neck and dowel have an added French polish coat, which looks to have been done decades ago. The rim finish and plating remains original with some typical wear, especially to the outside of the rim.

The neck is secured at the body end with three screws which were likely added later, there was probably one originally. The neck itself is surprisingly straight; it may have been refretted along the way but if so it was some time back. The very thin plastic head is a style not available for decades, likely from the 1970s. The hardware appears original as noted; The bridge is later but still has considerable age to it. Within its limits this is a nice instrument; the original composite tuners are lovely but not the easiest to tune reliably but that taken into account this is a solid survivor of the gilded age. . Overall Excellent - Condition.
×