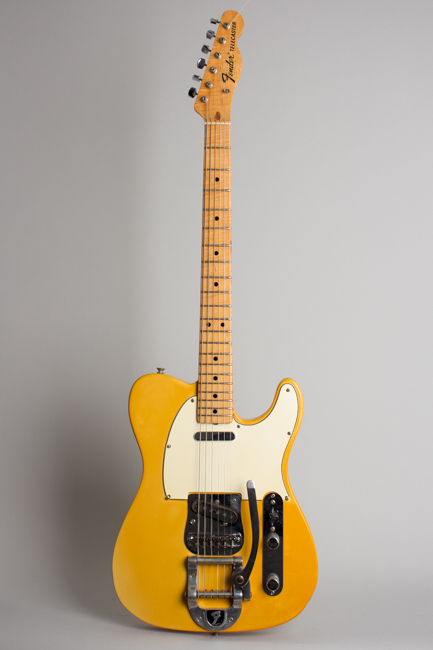 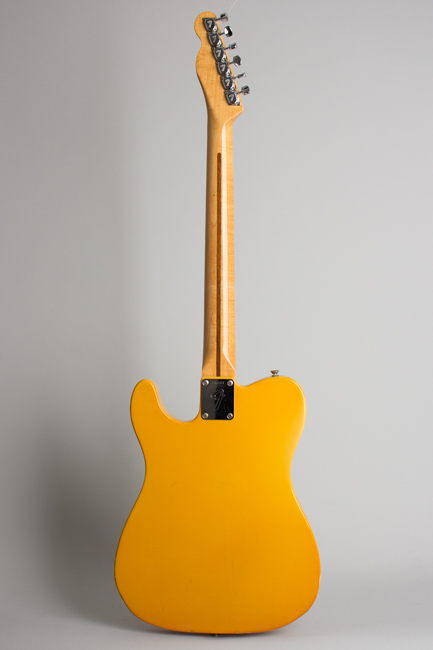 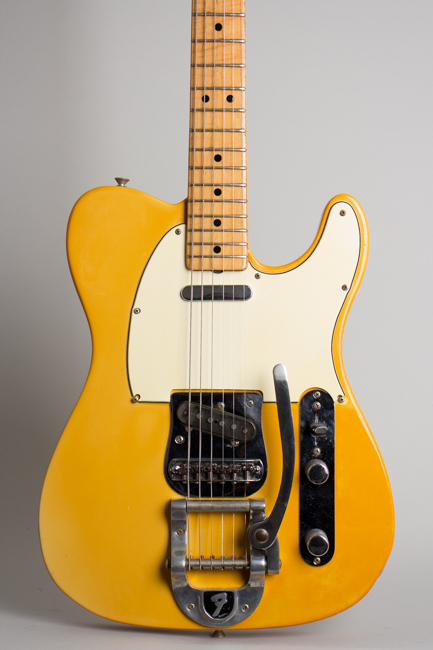 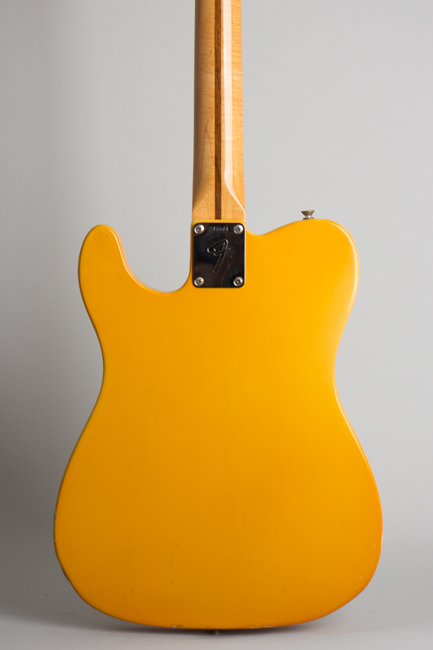 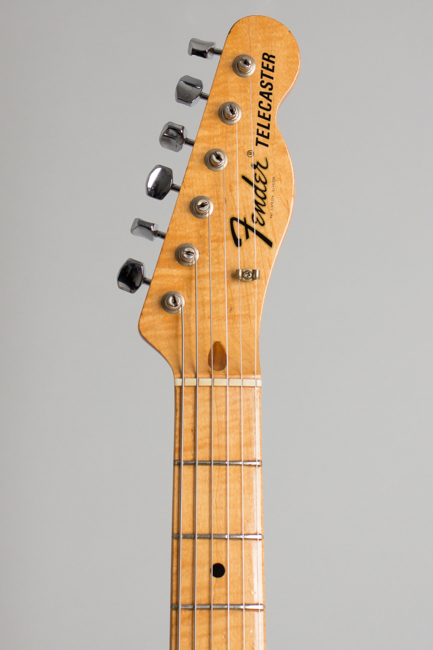 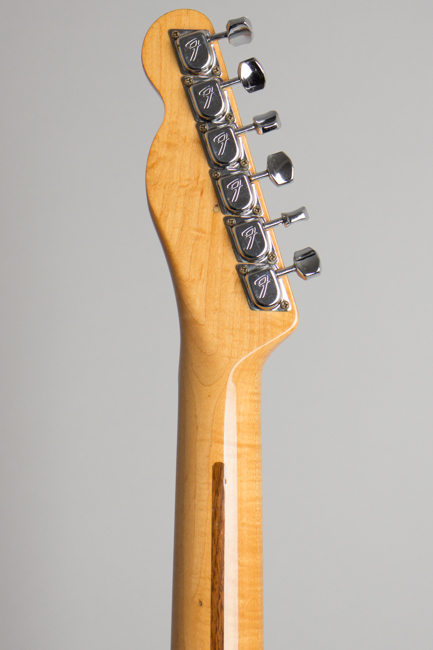 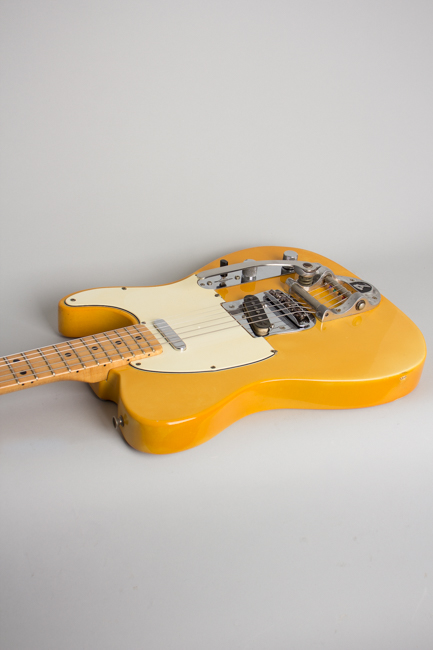 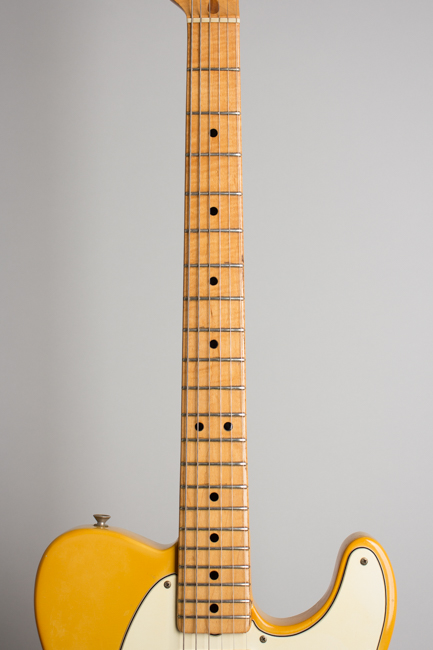 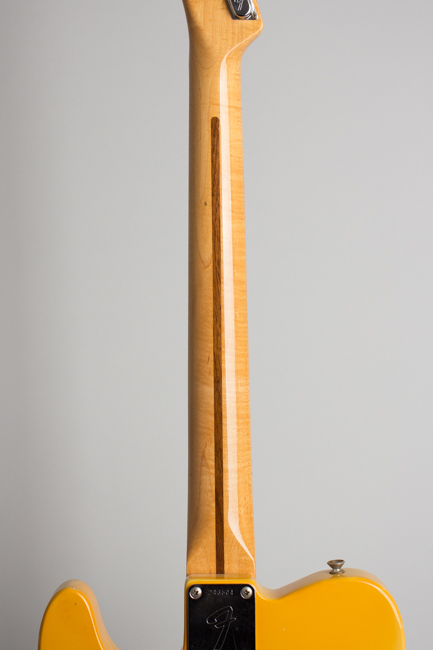 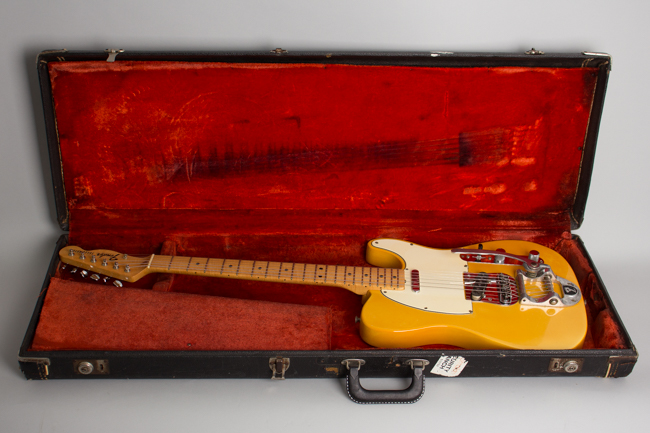 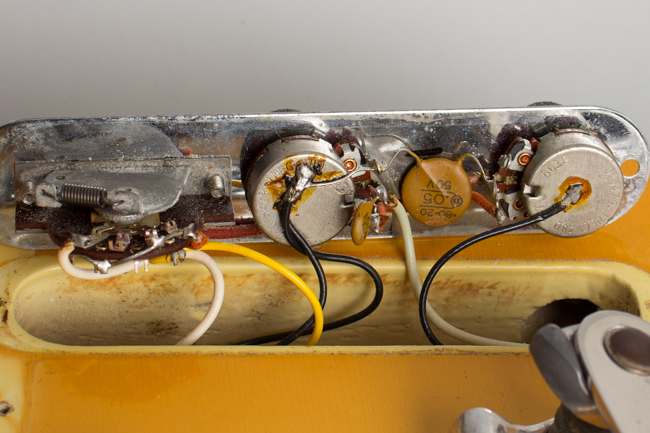 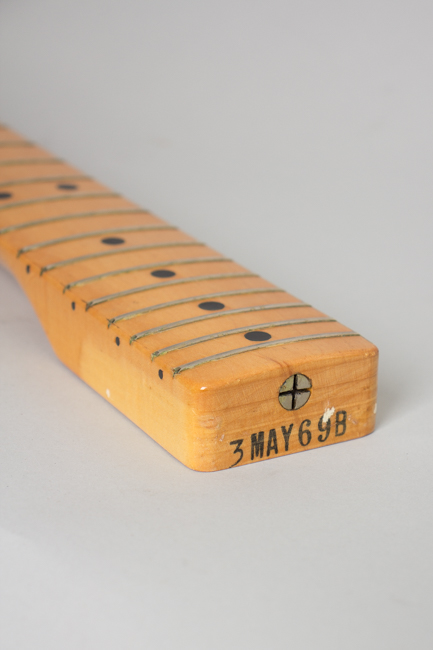 This is a nice example of a 1969 Telecaster with a factory-fitted Bigsby vibrato, one of the better new ideas CBS-Fender brought into production after acquiring the company in 1965. Paul Bigsby had designed a version of his "True Vibrato" unit specifically for the Telecaster as early as 1953 but Fender never adopted it and they are extremely rare today. The CBS-Fender Bigsby was offered as an add-on or factory fitted to the Telecaster, which can be easily distinguished by the lack of string holes in the back of the body. This option initially proved fairly popular but was discontinued in the 1970s as interest in Bigsbys in general hit a low ebb.

The CBS blueprints for the "F" branded Bigsby tailpiece were dated to the beginning of September 1967, the option was available by early/mid 1968. Beach Boy Carl Wilson used an early example for the group's Ed Sullivan show appearance. This guitar's one-piece maple neck is dated May '69, not long after the original 1950s-style one-piece construction was revived. The original pots date to the 32nd week of 1966; CBS bought so many pots that year that 66-dated pieces are the norm well into 1970.

The original finish shows a lot of yellowing but not too much wear. The neck has a subtle but nice flame figure to the maple that is quite attractive. The hardware is original and complete including the "F" tuners, Pearloid-on-the-reverse white pickguard and Jazzmaster style bridge. This is a great sounding guitar with a powerful dose of twang from the bridge pickup and nice mellow tone from the fingerboard unit. Overall one of the nicest Bigsby Teles we have had!

This "summer of '69" Tele remains nicely original and relatively clean overall, played with some typical light wear but no modifications. The finish has been "smoked" quite a bit, giving the guitar a darker more butterscotch patina than its original white/blonde hue. This seems common in this era of early Fender experiments with blonde Poly finishes on the body. There are some minor chips and dings and a few finish rubs to the edges, with some general handling wear but this appears to be a fairly well-cared for guitar.

The neck finish is really quite clean too with some small rubs along the treble edge of the fingerboard. The pickguard had shrunk slightly up a decent amount, which is typical of these pearloid-backed units from the 1969 period. There are pulls at several of the screws and the upper and lower rear corners has split off. The bridge itself shows some typical corrosion to the steel saddles, the snap-on cover is long gone.

The original frets show some wear and re-crowning but still play well. For 50+ years out in the world this is below average wear and tear and this Tele is as ready to twang the night away just like it was 1969 (OK maybe 1971) again! The original (or at least period) black Tolex case is VERY battered but all the latches still work and it remains more or less functional. Excellent - Condition.
×