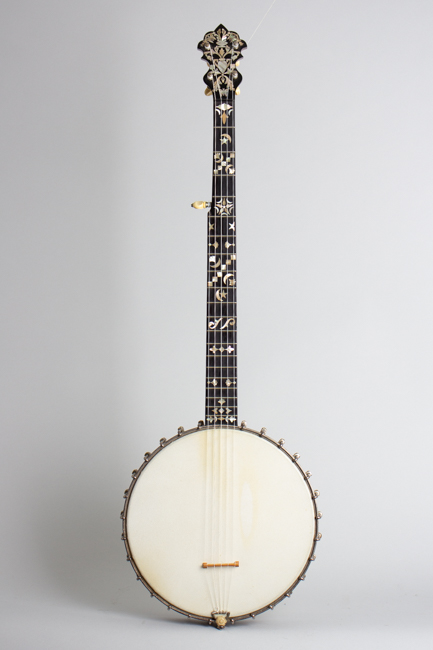 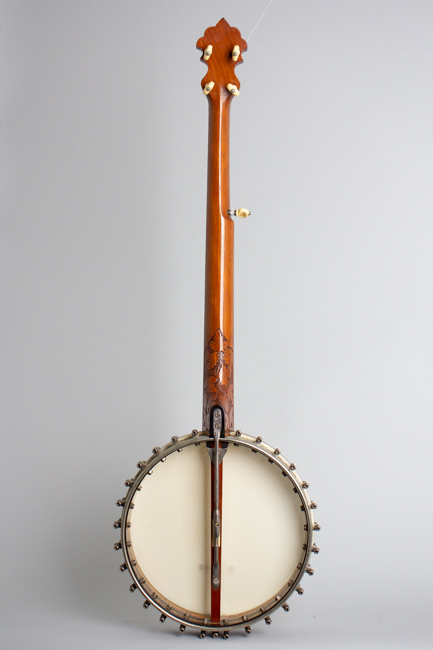 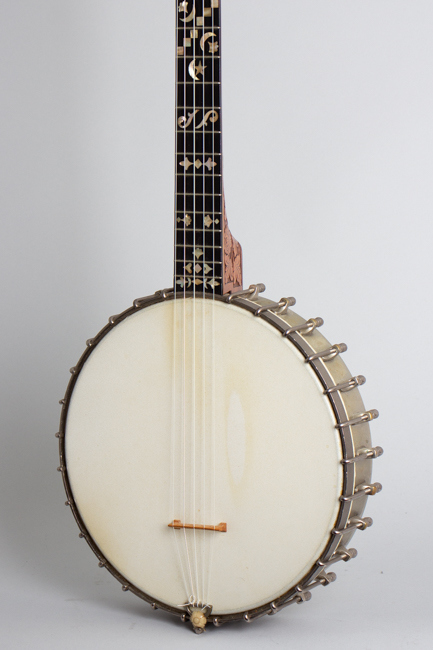 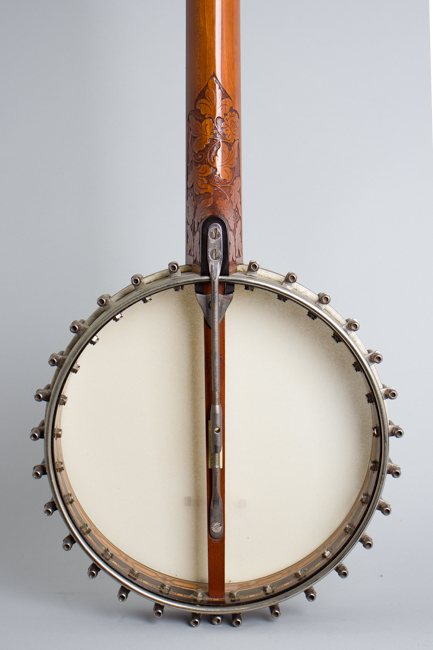 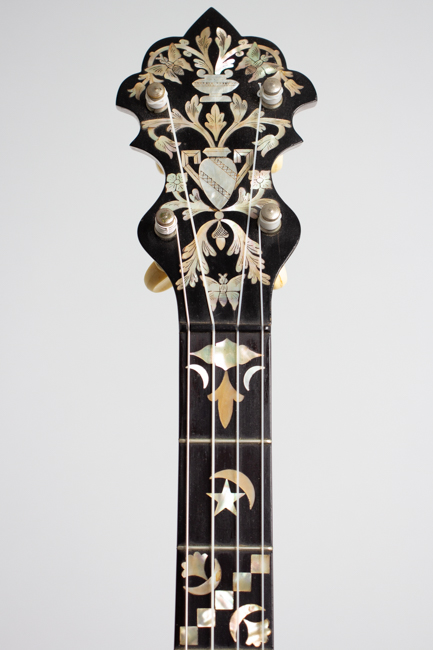 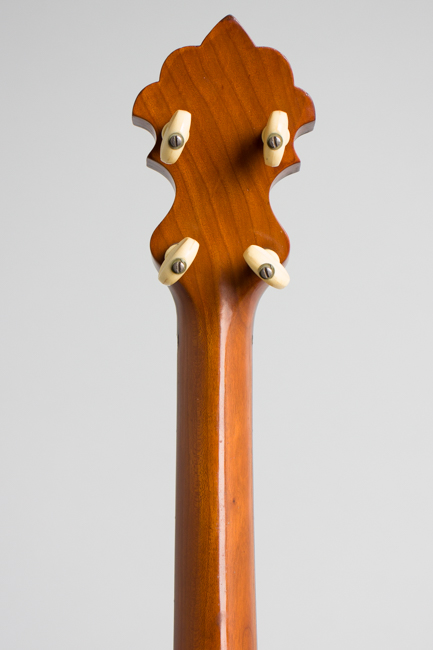 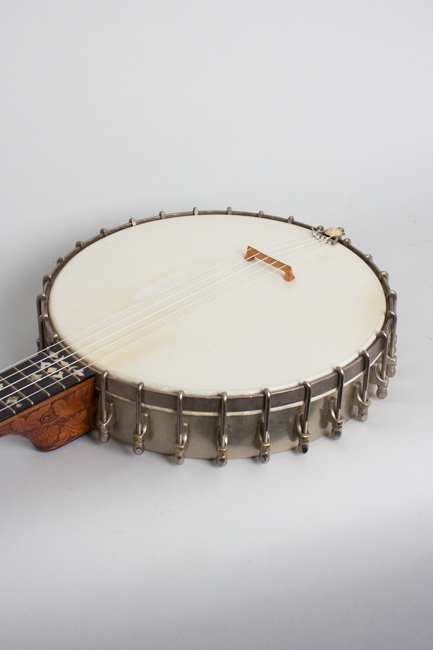 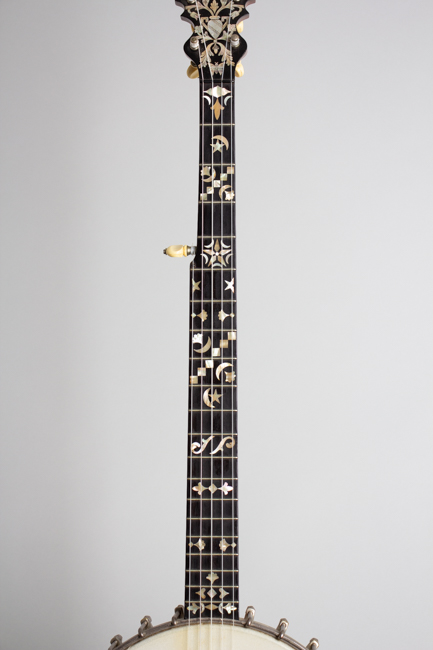 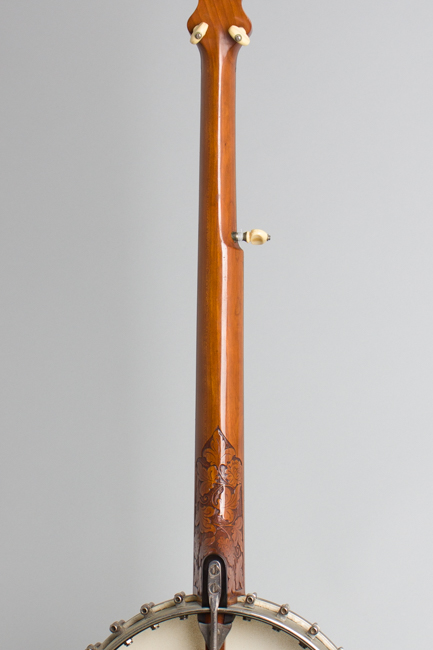 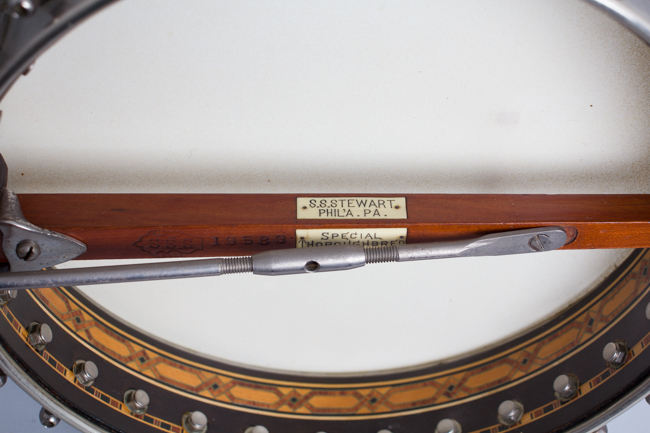 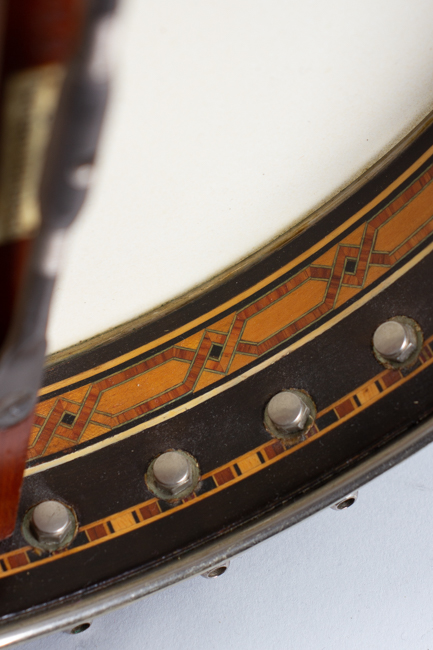 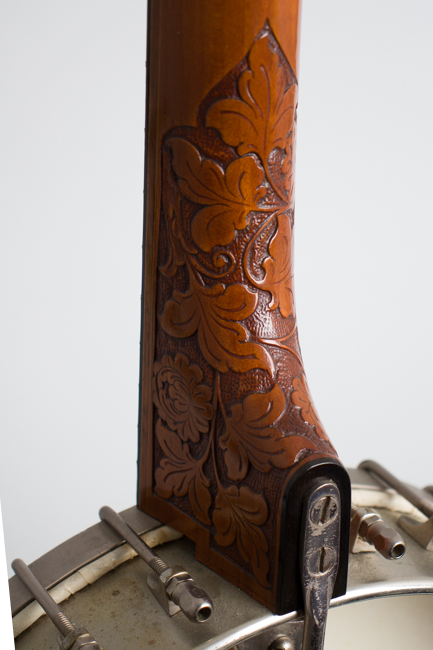 This is an S.S. Stewart banjo marked "Special Thoroughbred" made around 1897-8 not long before the founder's death in April '98. At the time the Philadelphia company was, by their own account at least, the world's greatest banjo maker, although both Fairbanks and Cole would have begged to differ! Originally the Stewart "Special Thoroughbred" models were built with higher grade materials but devoid of fancy fingerboard inlay; obviously by the time this one was made that distinction had been lost! This is quite a fancy banjo, with a level of ornamentation that would have put it in the $60+ range in 1898, a considerable sum of money even in the Gilded Age.

Most of the features on this instrument are fairly high end. It is built around a 11" spunover 28 bracket rim with a 27" scale cherry wood neck. There is a lovely dense floral-and-vase engraved pearl inlay pattern on the headstock, which is not one of the common Stewart patterns. The fingerboard has very elaborate inlay with familiar Stewart pearl motifs in various combinations at nearly all of the fret positions. The heel is carved in a typical Stewart floral motif.

The dowel stick carries an inlayed celluloid "S.S. Stewart, Phil'a PA" logo tag and an impressed "SSS" headstock-shaped logo. An ivoroid "Special Thoroughbred" tag is set into the dowel as well just below the serial number. The outside of the rim is plain nickel plated; inside it is filled with elaborate wood marquetry, something Stewart usually saved for very top-end banjos. The tailpiece is the original "Common Sense" style with the center "walrus ivory" (per Stewart) decorative rosette still intact. The tuners are standard period friction pegs with ivoroid buttons. Stewart's patented turnbuckle neck brace is intact and working; this was one of the earliest such systems.

Stewart was never at a loss promoting his wares; The "Special Thoroughbred" was described as "made of the choicest selected material, and possesses the quality of musical tone so desirable in a concert banjo". He added it was "made for BANJO PLAYERS exclusively and not novices". For a time the Thoroughbred models were not sold in music stores, but had to be special ordered directly from Stewart's Philadelphia factory. The banjo shows some wear and tear but remains a nice survivor of the first golden era of the 5-string banjo, a true playable antique and a lovely example of S.S. Stewart's better grade work.

This banjo remains in largely original condition showing wear typical for its age, now 125 years old! The finish on the back of the neck and inside of the rim appears to have been lightly overfinished decades ago, not too heavily and shows very little subsequent wear. The fingerboard and frets are original and also show very little wear.

There is some typical corrosion to the outer plated rim surface, but none of the plating has gone down to the metal. The hook and nut set is all period and appears completely original as indeed does all the other hardware including the tailpiece, neck brace and friction tuners. There is some general minor plating loss and corrosion but much of the nickel plating is very well preserved.

This banjo is set up with what appears top be a old hand-tucked thin plastic head, something we have never seen used like this before. This shows a bit of wear but is very solid and actually sounds quite good. Like all early Stewarts this banjo was built in an era when only gut strings were used, so it is set up with a Nylon classical set. We would NOT recommend steel strings on this instrument; the cherry neck is relatively straight for one of these but was never intended for steel string tension. Many old Stewart banjos have been effectively ruined by fitting with steel over the last 100 years. Taken as it is, this is a lovely original period piece, a fine playing and sounding banjo within its 19th century intentions. Overall Excellent Condition.
×