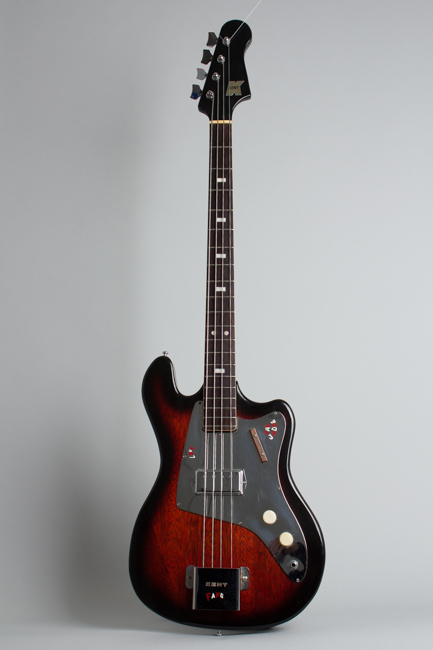 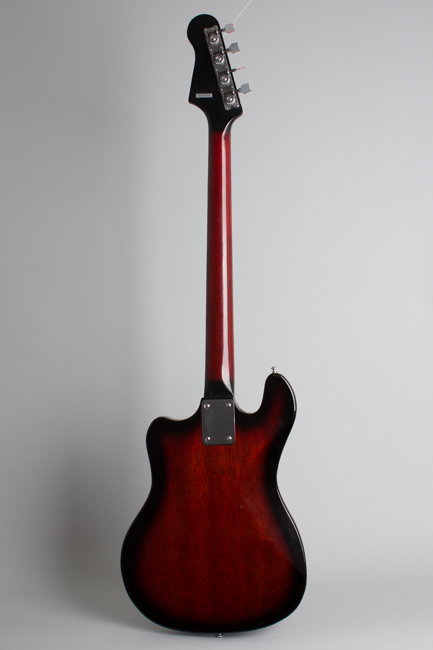 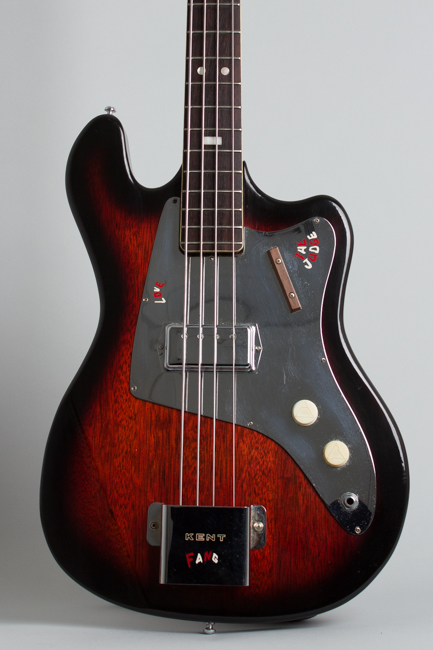 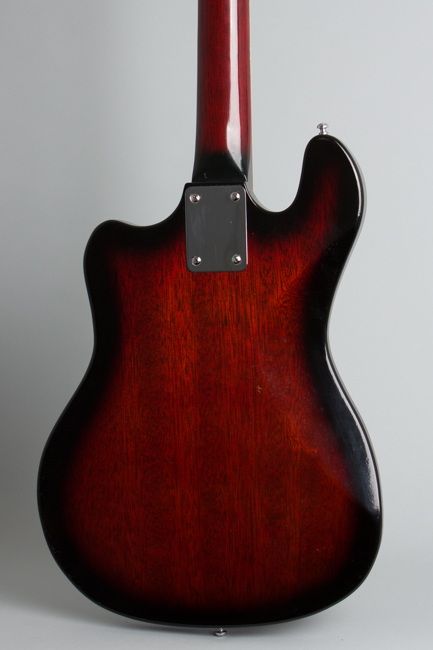 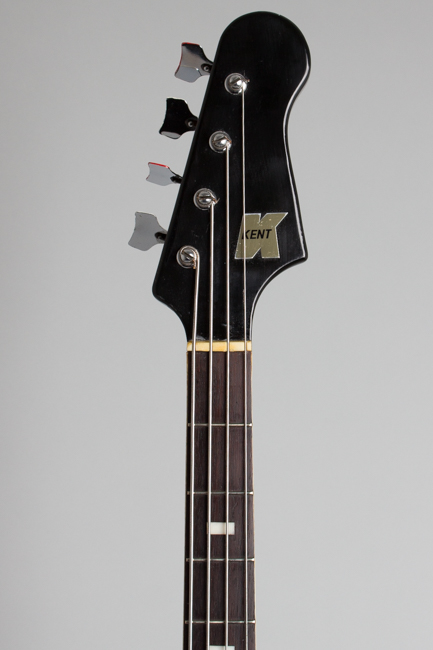 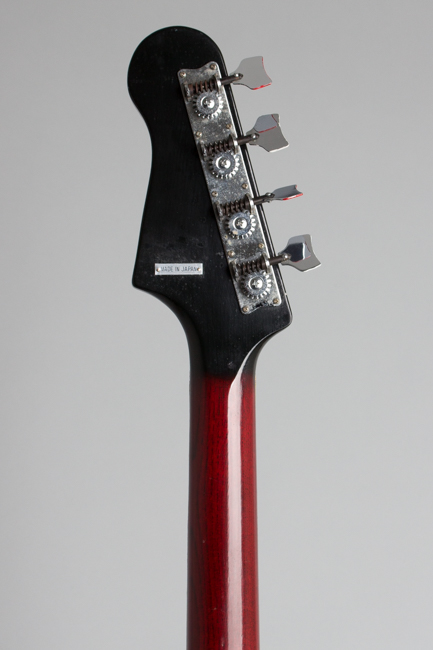 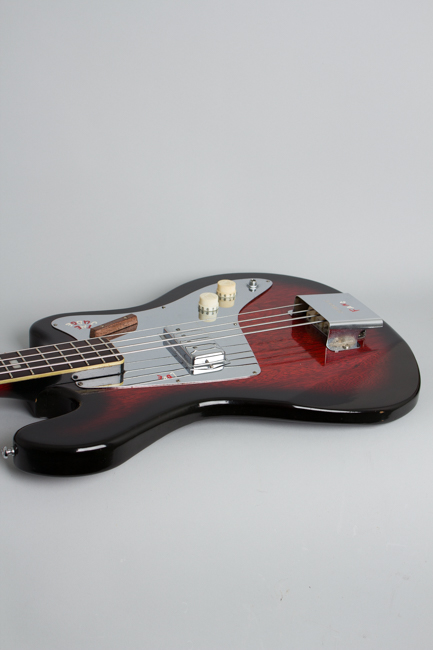 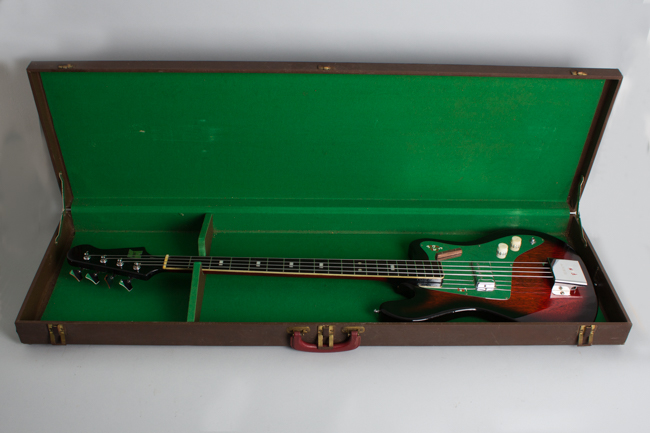 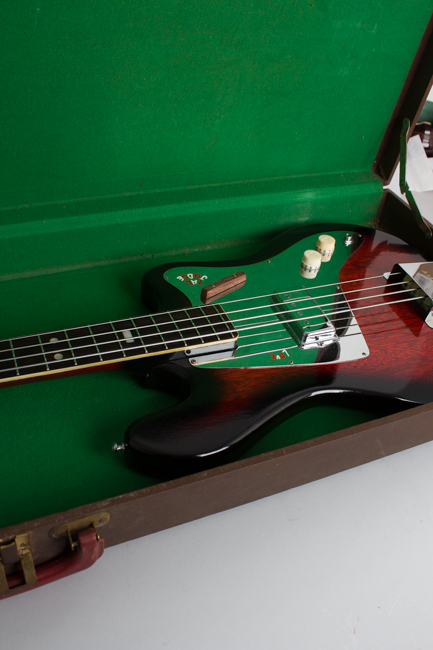 "Here Come De Judge!" OK, we'll admit it was the added graphics that attracted us to this instrument, but really for an early Japanese-made bass this is a surprisingly good player's piece as well. Still, it's the history and a lost story we can't resist! The bass is marked "Love" and "The Judge" in cleanly applied red and white enamel on the pickguard, "Fang" on the tailpiece cover and the edges of the tuners are also painted with enamel. The band name "The Brothers Tyme" and a large "THE JUDGE" are painted on the case lid; it doesn't get more 1960s than that! We don't know if "The Judge" and his band ever got beyond the local circuit (or even the garage) wherever they were, but we hope they had a great time doing it. This bass was part of somebody's Garage Band experience in those far off days, and survives as tiny piece of the great 60s mosaic.

The Kent Model 534 "Basin Street" itself is a slightly unusual instrument, one of the very few long-scale basses in the early Japanese import period. Kent was a brand of NYC jobber Bugeleisen & Jacobson, who were in the vanguard of importing fairly large numbers of electric guitars from japan starting seriously around 1964. This bass was part of their first 1964-5 line, priced initially at a respectable $139.90 without the case. B&J promoted the Kent brand very aggressively at the time, with lavish color catalogs that self-consciously aped Fender's kids-having-fun graphic sensebility. The brand ran up through the end of the '60s, but this is from the early period of the Kent's heyday.

The scale on this bass is 33 1/2", just a bit shy of Fenders 34". Nearly all early Japanese-made basses stuck to the short 30" scale, making this rare exception a much more prifessional-feeling instrument for its time. It is simply made with a bolt-on neck topped with a bound, block inlaid rosewood fingerboard and a VERY Fenderlike headstock. The pickup is basically the same as the now-vaunted early "gold foil" Japanese units, just under a plain silver cover. The pickguard is chromed metal, with the centrally-mounted pickup and plastic tone and volume knobs and the jack in the usual spots.

Kent instruments were very popular here in the NYC area where B&J were located, especially among the local garage bands who could not afford a Fender. We don't know where the "Brothers Tyme" did their thing, but this bass was obviously a big part of their act! As a bass this is a decent instrument, but as a '60's relic this is a truly stellar piece!

This bass shows mostly minor wear but overall is very clean and original, with of course the added graphics as a bonus! The body has some light wear and scuffing, mostly to the back. The metal pickguard shows scuffing and some light scratches under the pickup and there is also scuffing and some spotting on the headstock.

The bass remains all original and unaltered down to the original small-ballend flatwound strings. The foam mute under the bridge cover has deteriorated but all else remains as it was when "The Judge" held court. The neck is about as straight as these get, there is some slight relief but the bass is completely playable (most of these have warped like a longbow by now). While it will not replace anyone's 1964 Precision this is an neat and surprisingly good sounding piece of '60s pop culture. It resides in the original US-made hard case emblazoned with The Brothers Tyme's timeless logo. Overall Excellent Condition.
×