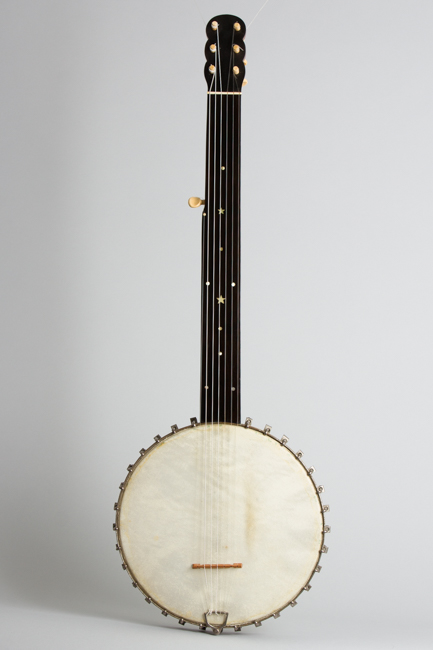 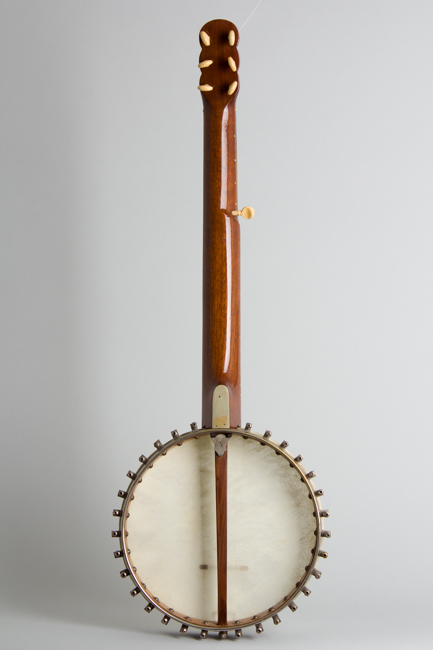 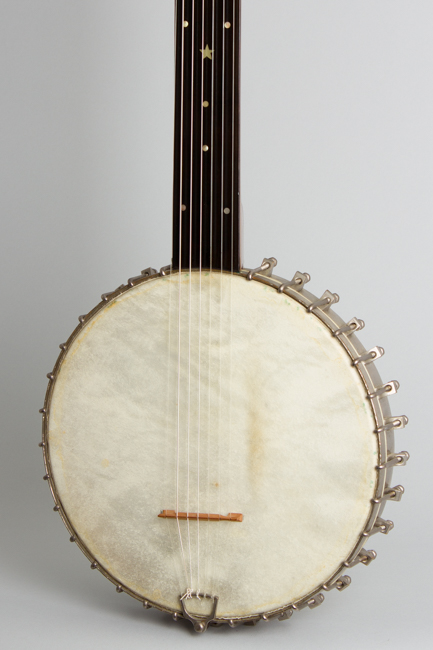 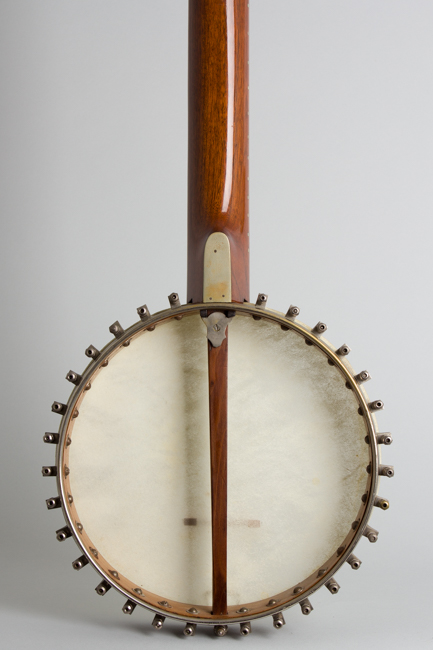 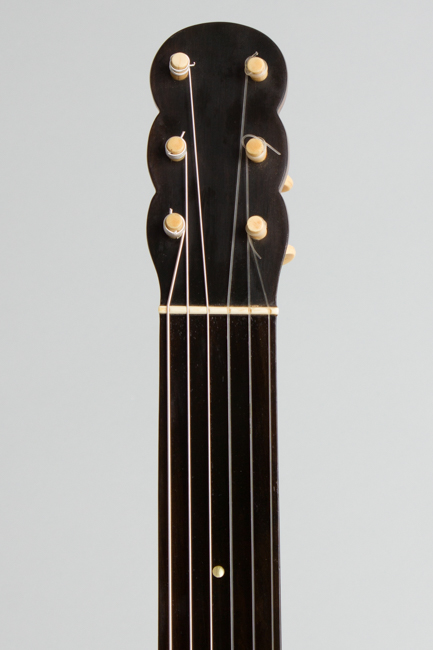 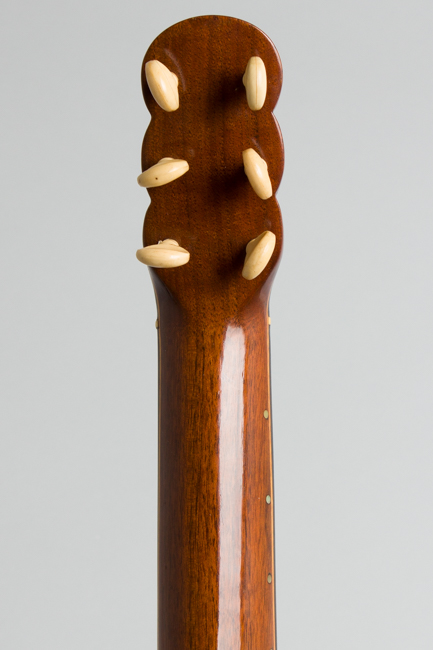 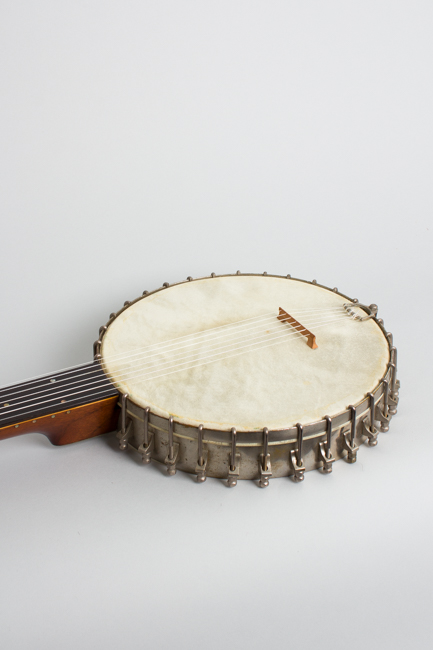 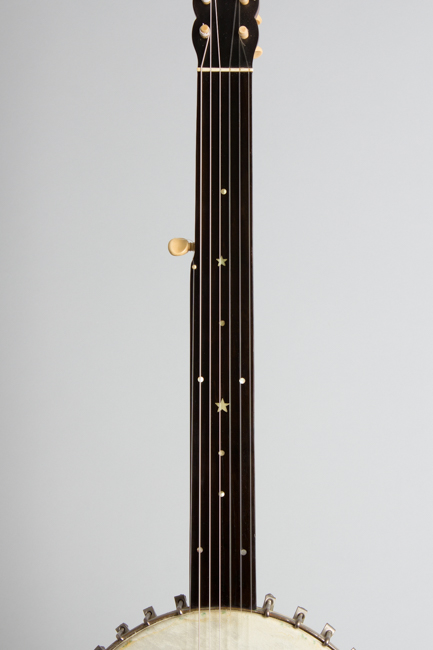 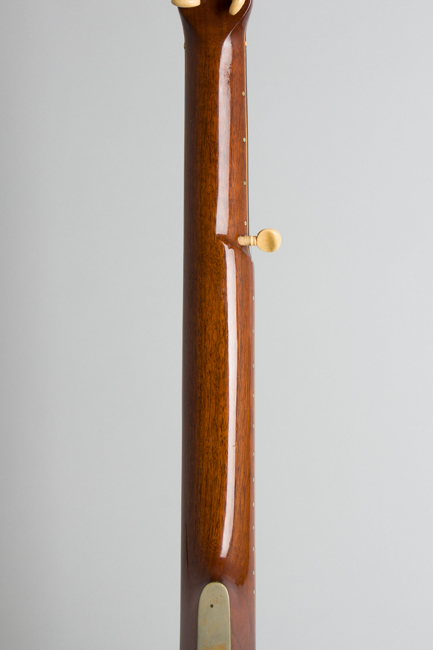 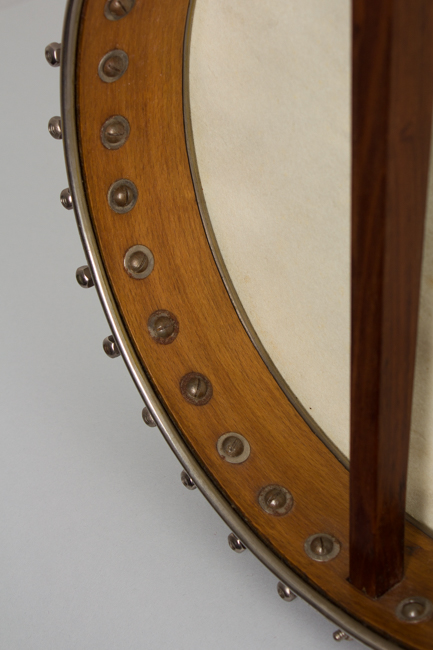 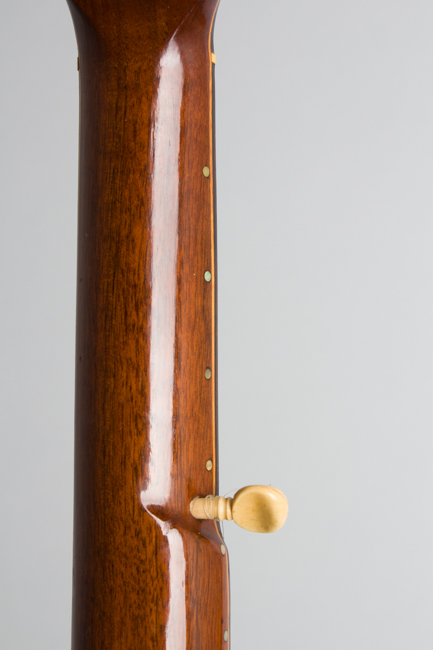 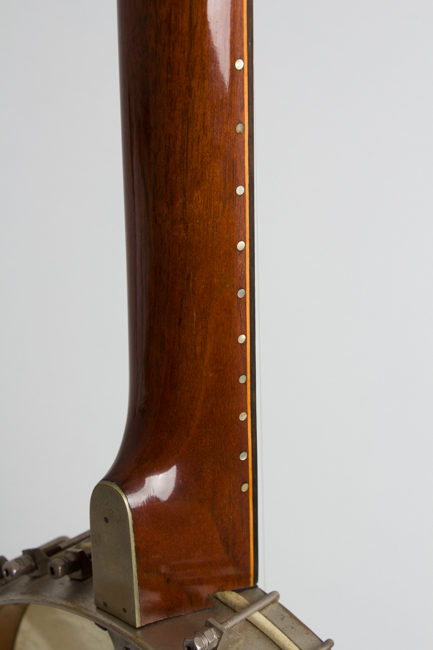 This unusual instrument is a 7-string fretless banjo, something extremely obscure in the US but well over a century ago relatively popular in England. It does not carry a maker's mark but is definitely of English origin based on the layout and features. The most common tuning for these 7 stringer was noted as gGCDGBD but of course for the modern player many options are available, including standard guitar intervals (with an added drone string) or other banjo-based variations.

The history of this 7-string English model is obscure but during the mid 19th century minstrel show troupes toured Britain igniting a craze in for America`s homespun music and the banjo. Even in the 1890s banjo sales remained big business in the UK. Evidence from contemporary newspaper ads reveals that as early as the 1840s English makers were producing 5, 6 and 7-string banjos with a fairly strong bias toward 6 and 7-string models, for reasons unrecorded.

This is a very nice example of these 19th century English made instruments, extremely well preserved for its age (conservatively 130+ years). It has a traditional American-style spunover rim, with a very nicely made mahogany neck with a lovely smooth fretless ebony fingerboard. All woods used are very high quality. The fingerboard has some nice pearl inlay and there are "fret-dots" along the bass side designating every position. The tuners are a matched set of ivoroid pegs; the tailpiece has only 5 notches but appears original or at least period. This is a considerable rarity on these shores, and a really challenging instrument for the banjo or guitar player with a taste for "something completely different"!

This is an amazingly clean and functional instrument for being at least 130 years old. The neck and dowel have a later overfinish, done decades ago. It is somewhat shinier than the original would have been, but not obnoxiously heavy. These components show very little subsequent wear. The fingerboard has a few very fine cracks in the ebony but nothing that affects playability.

The plating on the rim and hardware shows some wear and corrosion but again less than might be expected for how long this instrument has been on the planet. All hardware appears original, and it is set up with an old skin head and strung with Nylon and silkwound strings for an appropriate sound. This is a very playable instrument, although not the easiest for a modern player used to geared pegs to keep in tune! All-in-all a different experience from the standard 5-string for sure and a really nice piece of banjo history. Overall Excellent Condition.
×