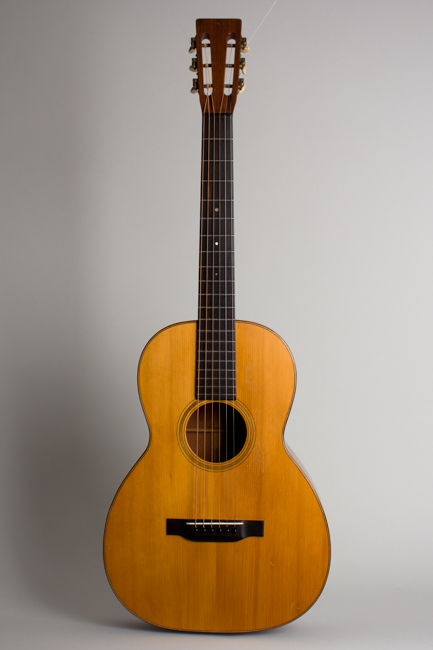 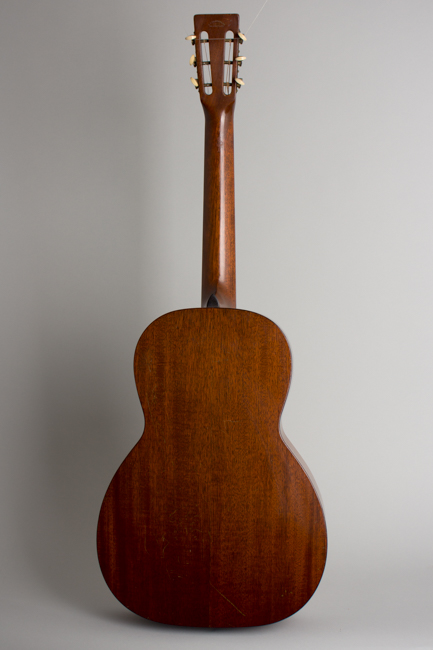 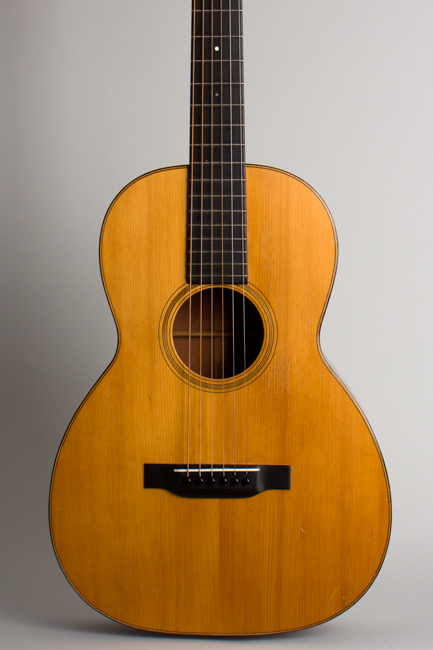 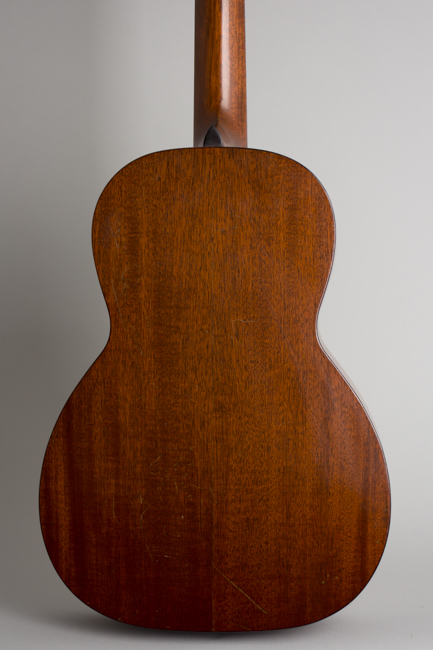 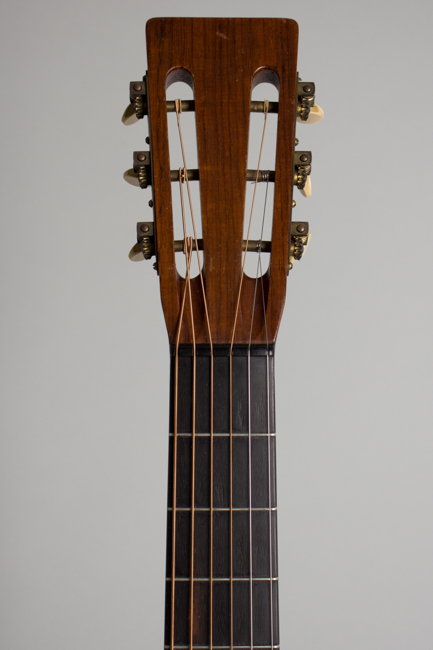 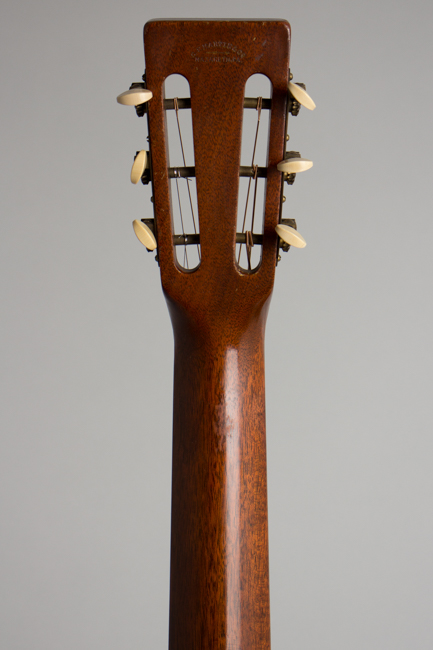 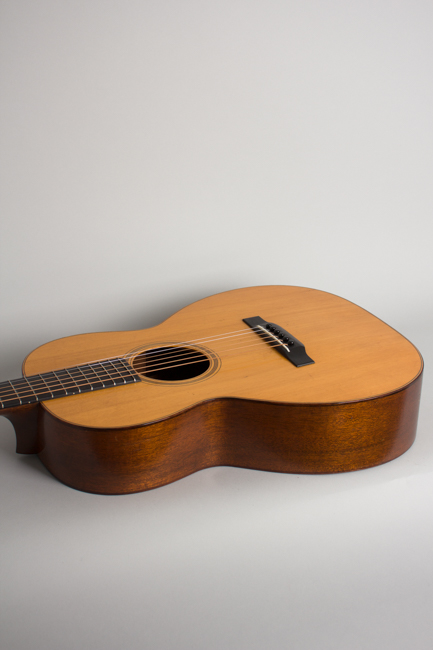 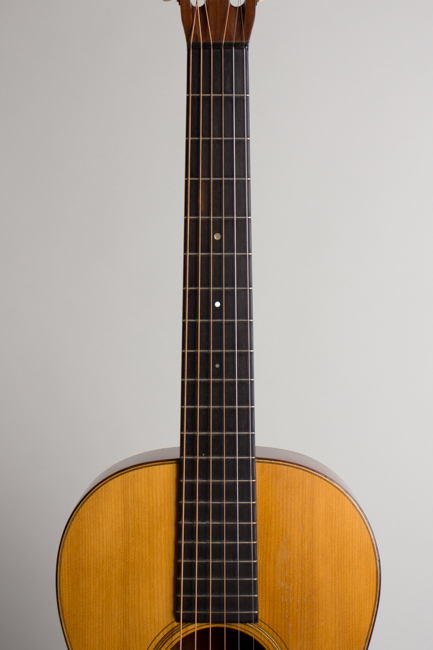 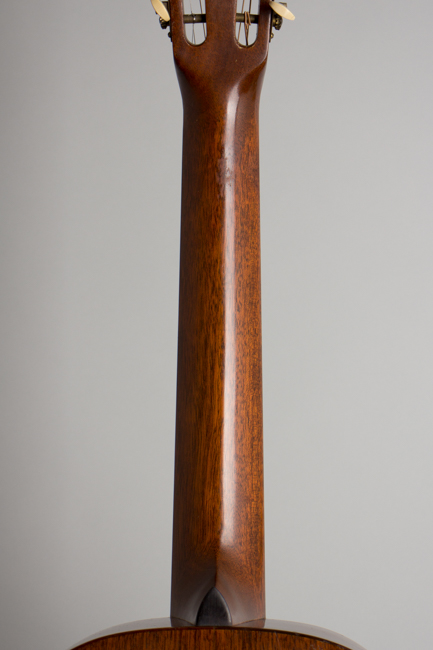 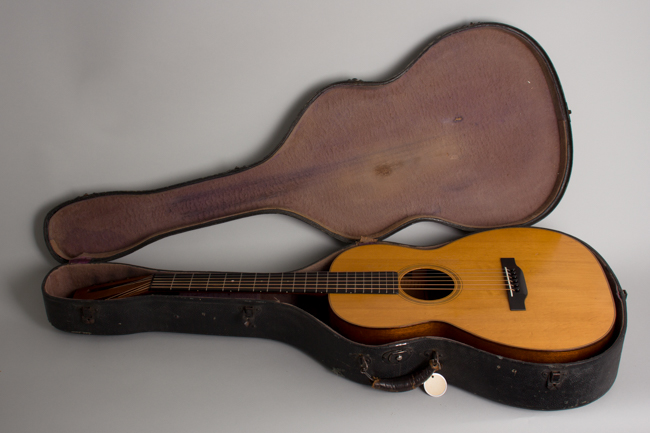 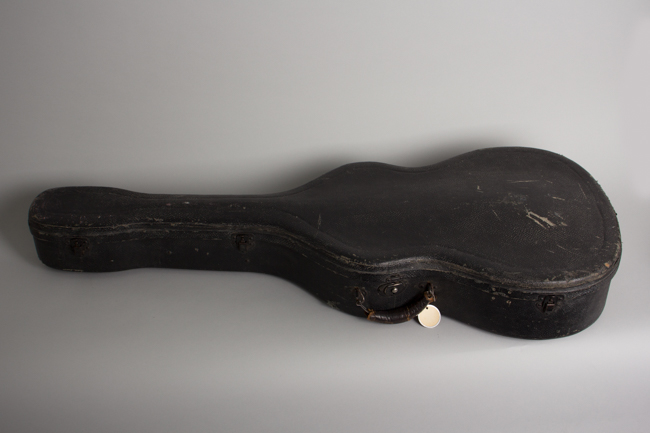 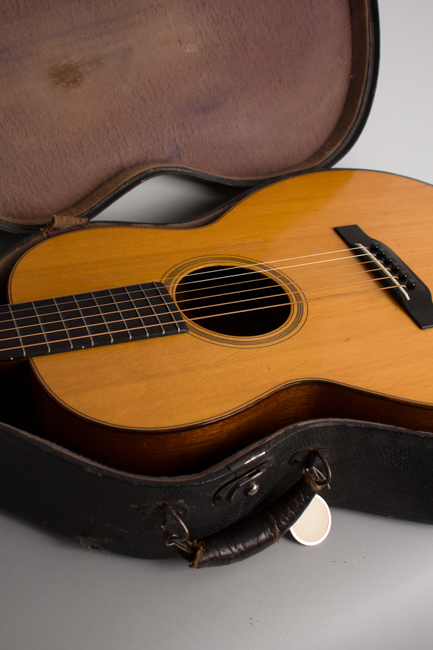 The 12-fret, steel string Martins of the late 1920s and very early 1930s are some of our very favorite guitars, period. For only a few years right at this time -- just before Martin altered nearly all their designs to the 14-fret neck "Orchestra Model" pattern -- the company crafted a relatively small number of these traditional long-body scallop-braced flat-tops braced for steel strings instead of the gut used previously.

The other features remained pretty much as they had been since the 19th century, with a slotted headstock over the wide ebony fingerboard on the neck which joins the body at the 12th fret. These guitars were the final evolution of the original 1800s Martin patterns before the "modern" 14-fret design became the standard just a few years later. This 1929 guitar has the new-style larger ebony belly bridge, a feature just added to this model but is too early to be factory-equipped with a pickguard.

The Style 18 designation signifies a fairly modest instrument, the 00-18 being the middle mahogany model in the company's line, between the smaller 0-18 and the 15" wide 000-18. These models were built with mahogany back and sides instead of the even-at-the-time costly Brazilian rosewood but still maintain the same quality workmanship standards as the highest-grade instruments. The trim is simple with rosewood binding on the body, plain wood soundhole rings and small graduated dot inlay on the unbound ebony fingerboard. The tuners are simple unplated brass strip units with celluloid buttons.

This 00-18 was built in 1929 and is one of a paltry 227 examples shipped that year, priced at $45.00 (without case). Although that seems like a bargain even calculated in period money, it still represented a lot of cash for many Americans. This late 12-fret 00-18 is a rare guitar by today's standards; 1920's Martins were made in very small numbers compared to later periods, and if the original price seems laughable today this was still a fairly expensive flat-top guitar for the time.

This Martin has had some typical minor wear and repair but is an excellent player remaining in more original condition than many period survivors. The sound is more powerful than one might expect for a smaller instrument and has surprising depth. It makes a great fingerstyle guitar, and also works very well with a flatpick, from stringband music to early jazz and beyond. It remains a testament to its builder's skill and reputation and at least as fine a mahogany 12-fret 00-sized model as anyone has ever made -- then or since.

Overall this is a beautiful to behold and nicely original example of the early steel-string Martin 00, with some general wear but no major finish loss or repair. The very thin lacquer throughout shows light checking and other light signs of use. There are some small dings dents and scratches, but the largest area of loss is some pickwear below the soundhole and fingerboard. The only deeper marks on the instrument are a couple of "case bites," one on the top near the treble side bridge wing and another right at the edge of the treble side lower bout. Some scratches and press marks populate the back and sides, the headstock face has one small ding in the center.

The guitar is amazingly crack-free, hard to find on these lightly built flat tops today. The neck has been cleanly reset, and the guitar is very comfortable to play. The bridge has been carefully reglued, with only the slightest hints around the edges to show that the work has been done. It has been shaved slightly, the contours at the back of the bridge remain correct, but the front edge under the saddle has been taken down somewhat, and the saddle is a recent bone replacement.

The original bar frets show signs of light use and some wear in the lower positions but they remain very playable with plenty of life left. Everything else remains original on the instrument. The interior is undisturbed including the very small maple bridgeplate, intact with very little ball-end wear. The tuners are original and still fully functional.

This is a very fine playing and simply spectacular sounding guitar; powerful, evenly balanced and super responsive in any style of play. This model only existed in this exact 12-fret steel string form for a relatively brief time, and while not pristine this is one of the best we have seen. Overall Excellent Condition.
×