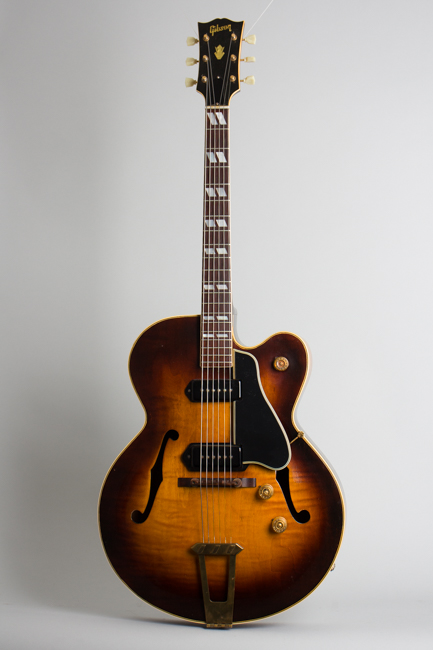 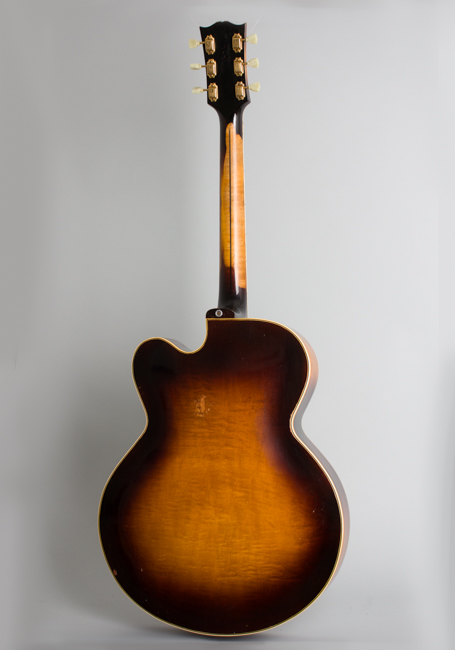 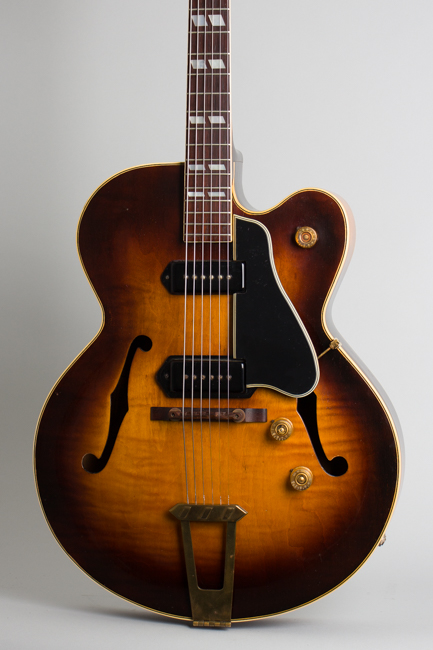 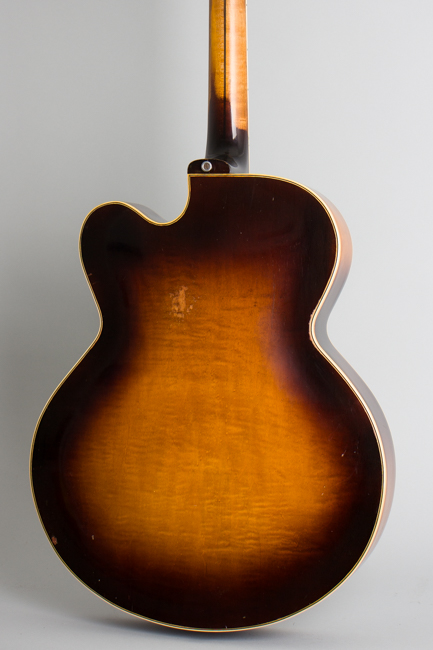 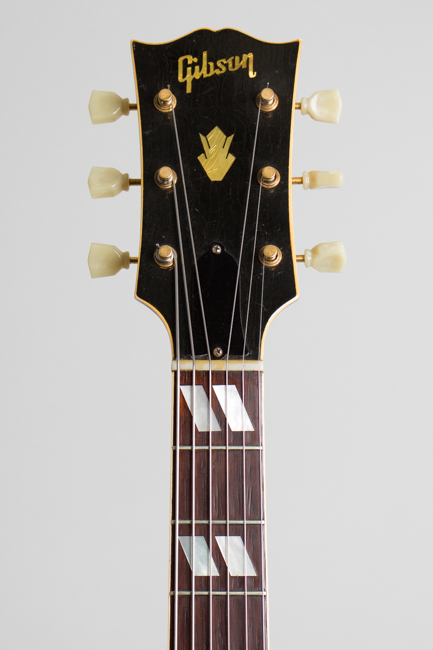 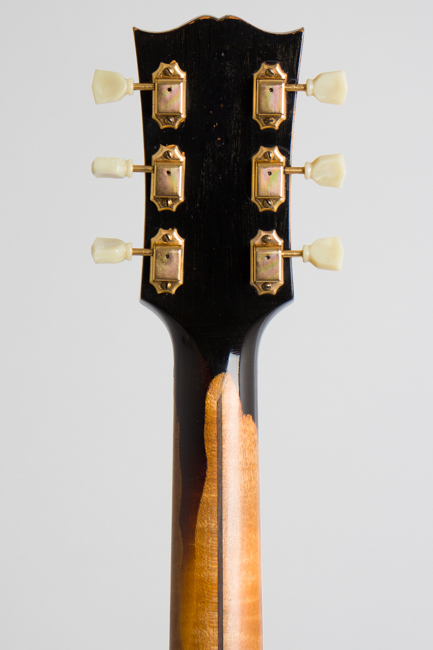 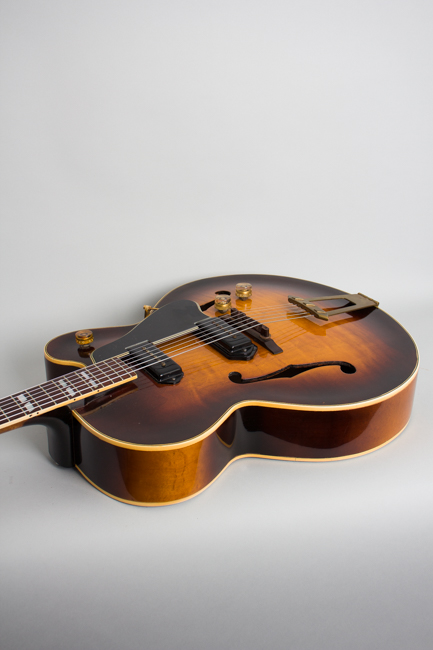 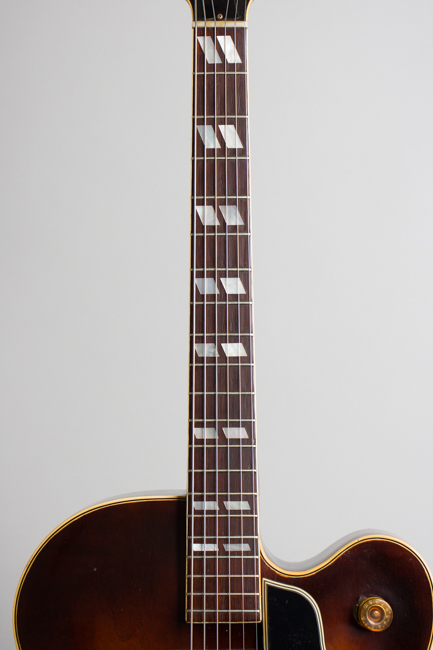 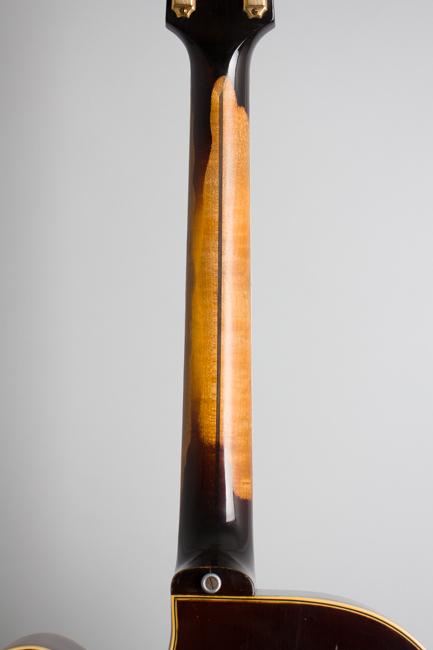 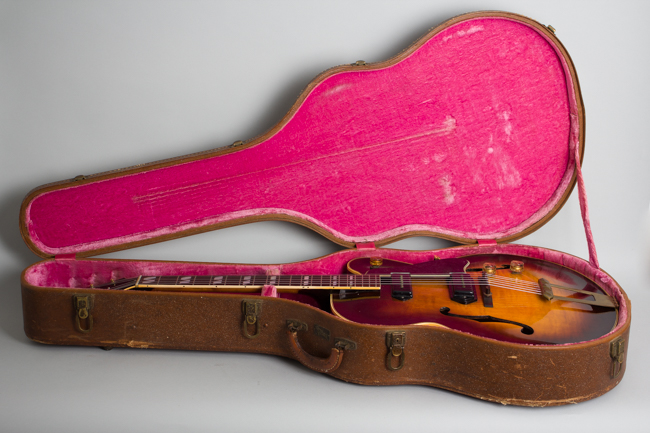 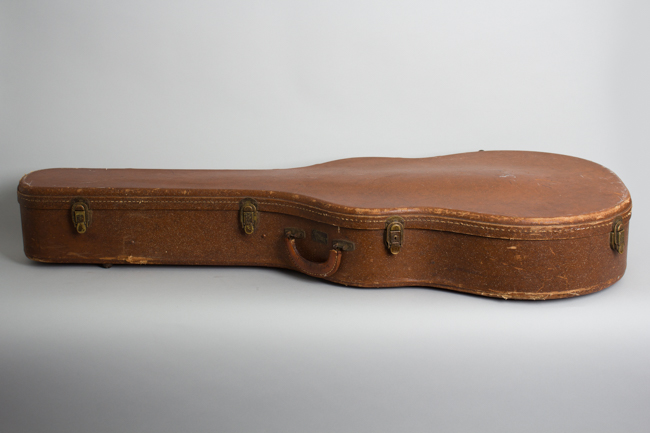 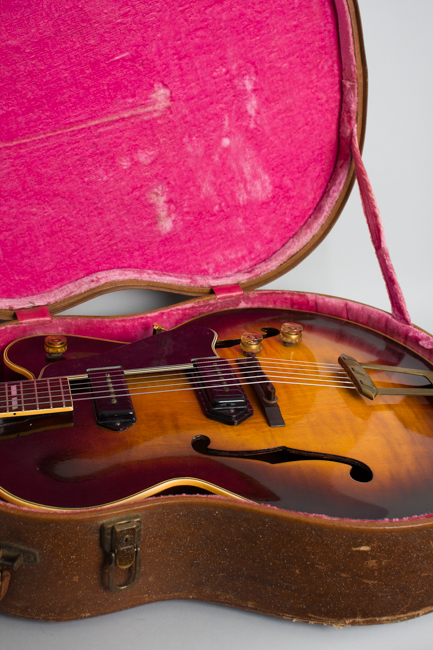 This is a very cool example of a 1949 Gibson ES-350, one of the true classic hollowbody electric guitars of the period and the template for many to follow. The ES-350 is a 17" fully hollow, laminated maple guitar that occupied the spot in the 1950's Gibson line between the mid-line 16" ES-175 and the flashy three-pickup ES-5. Up until mid-1949 it was actually the top of the electric line before the ES-5 appeared that summer. This was also the first full year for the double pickup ES-350, upgrade with a second unit near the bridge at the end of 1948.

This particular guitar was shipped in November 1949, one of only 76 sunburst examples shipped out that year. It mounts two black covered P-90 single coil pickups with "dog ear" covers, the standard Gibson unit of the period The controls are specific to this period with no switch, two volumes on the lower rim and a master tone control on the cutaway bout. This would be changed a couple of years along into the familiar 4-knob, 1 switch rig used ever since. While technically less versatile, this earlier system does allow more effective blending of the two pickups.

The ES-350 is a fairly fancy guitar, not flashy but with an overriding elegance. The triple-bound laminated maple body has a single rounded cutaway and two f-holes, with a deep amber sunburst showcasing some subtle but attractive tiger maple. All hardware is gold plated. The L-7 style hinged trapeze tailpiece has pointed ends and three raised parallelograms. The pickguard is a correct repro laminated B/W/B/W plastic with a beveled edge.

The maple neck is a three piece laminate, with a narrow black stripe down the center. The rosewood fretboard is single bound and inlaid with double pearloid parallelograms. The headstock is single bound with a mother-of-pearl crown inlaid in the peghead overlay. The Kluson Deluxe tuners have plastic "tulip" single ring buttons.

The ES-350 is a superb full-body electric instrument, which in the 1950's became a favorite of several top jazz players. In this twin-pickup configuration it is mostly associated with Tal Farlow, who used one for much of the 1950s, live and on his most famous recordings. This is also a more versatile instrument than some might think, equally at home in stylings from R&B grooves to flat-out country twang to full-blown vintage blues or Rockabilly raunch.

This is a very sharp looking guitar, a great player with some wear here and there but generally well preserved for its 70+ years on Earth. The finish shows typical checking overall and some fairly minor dings, dents, rubs and scuffs. The top is very clean, with only a few tiny dings. The only large area of loss is to the back of the neck, which is down to the wood from play over much of its length. There is one belt buckle spot through the finish on the back and some other random marks.

There is a small touch up on the back of the headstock where it looks like a strap bracket or something of the sort was once attached. Except for that small spot finish on the guitar is original and the patina is fantastic, with that classic Gibson "glow". There is one small sealed laminate crack just around the jack on the rim, solid but visible and not over finished. No other repairs are evident.

The hardware is a bit of a mixed bag, all the correct style and look but not all original to the instrument. The P-90 pickups and wiring remain original. The volume knobs are original, the tone knob is a period Gibson but slightly later, from the 1953-55 period. The pickguard and bracket are correct style repros, as are the Kluson tuners. The tailpiece is the correct period piece but the plating has been buffed down to the bare brass; it actually looks great and authentic to the instrument. The adjustable rosewood bridge is an original period Gibson piece but in a style more typical of the mid-'50s.

The original frets have been crowned down a bit showing no subsequent wear and playability is excellent. There is a strap button added to the heel. This is a fantastic instrument that looks, plays and sounds exactly as it should and absolutely captures the 1950s Gibson aesthetic. Overall a lovely old "Jazz box" with a killer vibe, still residing in the original brown HSC. Overall Excellent - Condition.
×