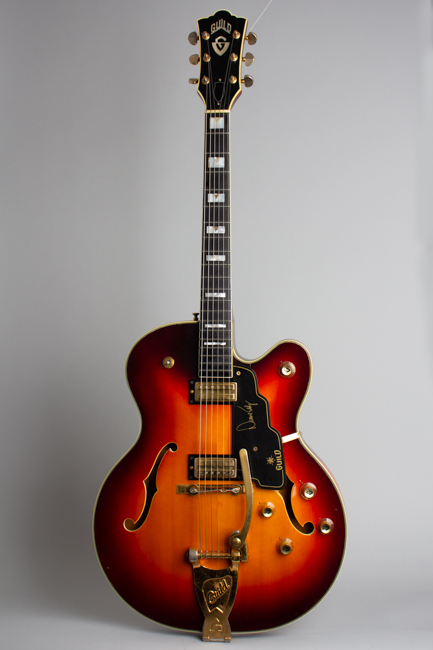 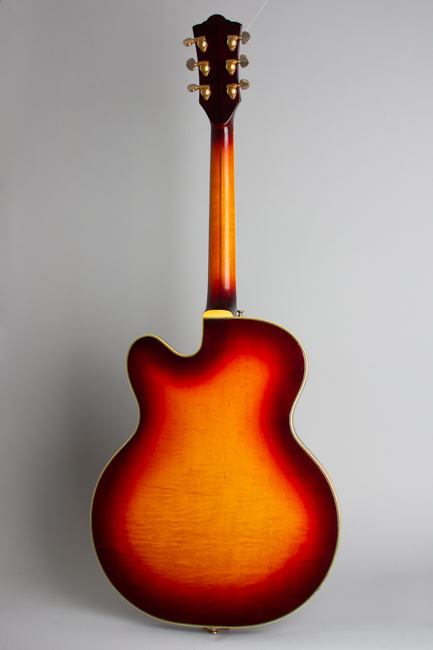 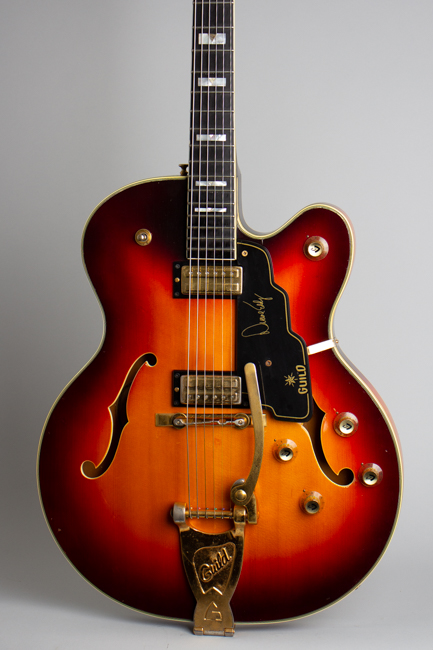 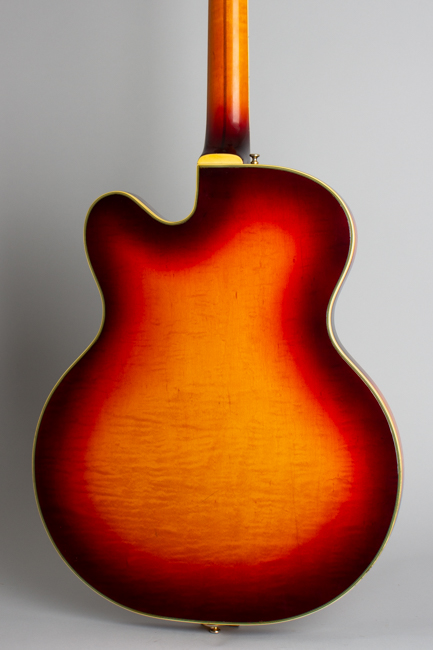 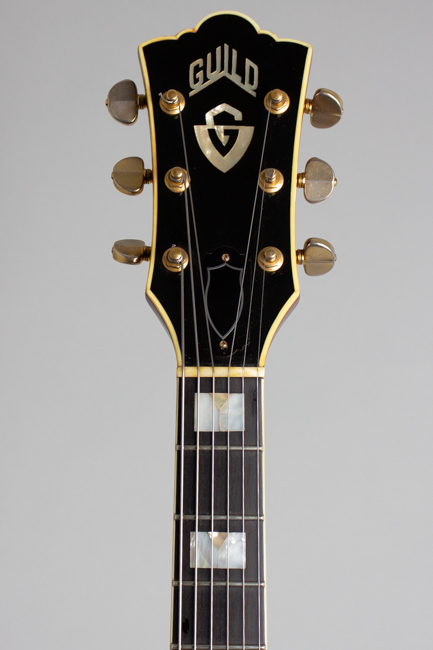 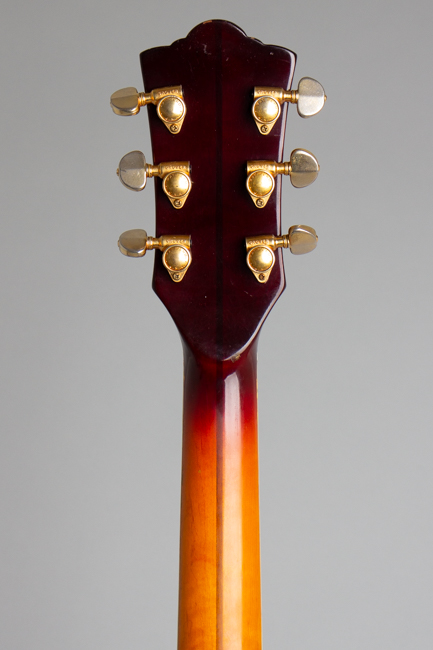 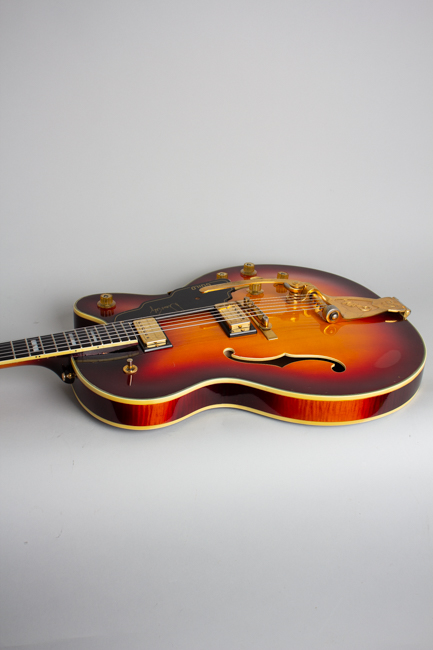 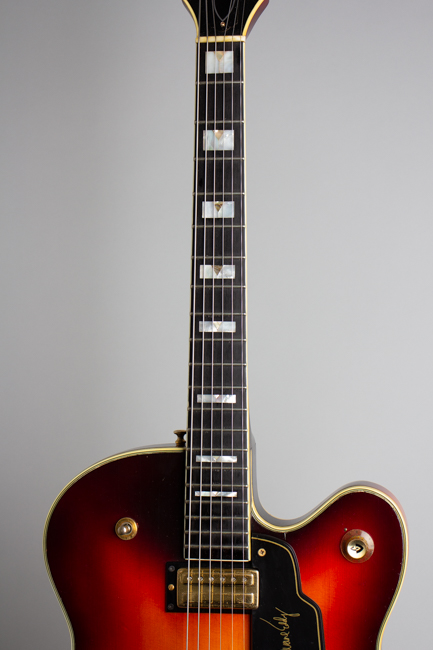 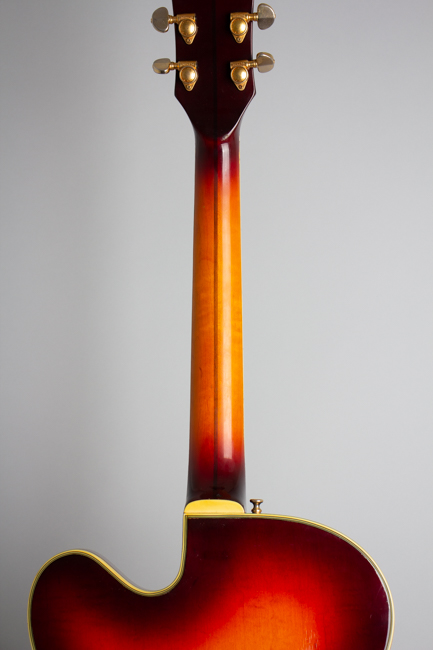 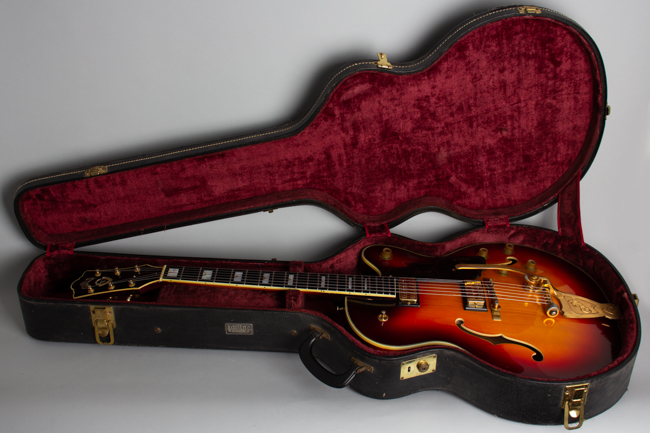 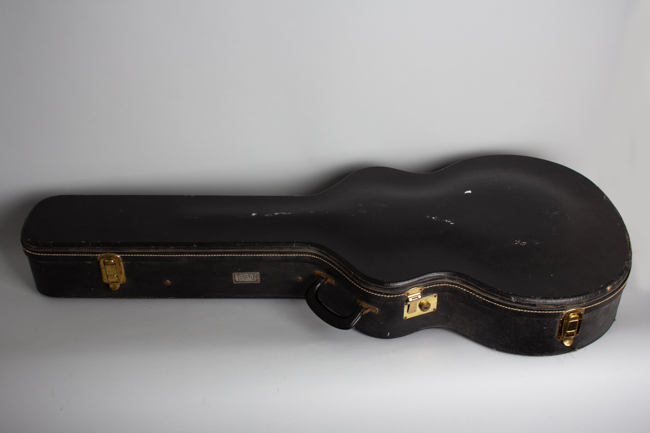 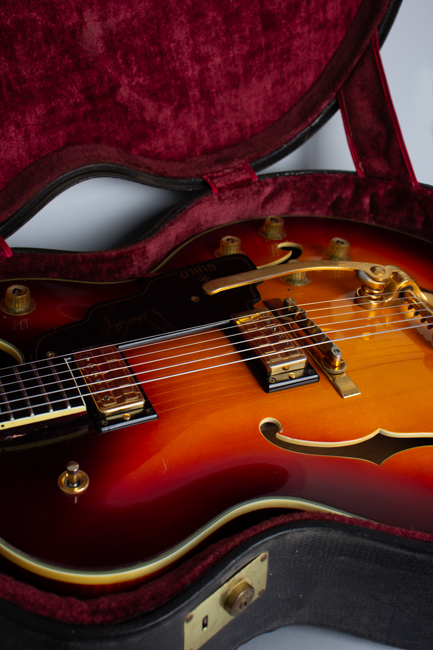 The DE-500 Duane Eddy Standard is a very rare guitar and one of Guild's most sought after 1960s offerings, a serious, high-grade professional instrument with a lovely combination of features. The Duane Eddy model was inaugurated by Guild in late 1962 as they jumped at the chance to catch the endorsement by the top-selling instrumental artist of the time. The original Duane Eddy signature model was this DE-500, a very high-end thinline hollow-body based on Guild's T-500 but adding DeArmond pickups, a Bigsby vibrato and a master volume knob on the cutaway, all features Duane Eddy specified from his Gretsch 6120.

This DE-500 from 1965 has a thinline 17" single-cutaway body, finished in the vibrant Guild red/orange sunburst; Duane's personal guitar was natural. It is built of laminated curly maple with a spruce top, 6-ply-bound top and back. The pickups are Guild's standard 1960s humbuckers as used on most of their line after 1963, which replaced the DeArmonds at that time. The tailpiece is a gold-plated Guild Bigsby unit paired with the aluminum Bigsby adjustable bridge, stamped "Guild spec." under the saddle. The pickguard is back-painted Lucite and has Duane Eddy's signature in script and the Guild logo.

The bound laminated maple neck has a split pearl-and-abalone block-inlaid ebony fingerboard, a descendant of the old Epiphone Emperor pattern. The bound headstock has Guild's typical plastic overlay with "G-shield" design inlay used on their top end guitars and is fitted with gold Grover Rotomatic tuners. This one carries the serial number EI-101 and is actually the first DE-500 in the new model-specific serial number pattern introduced in early/mid 1965, conveniently dating this guitar to that exact period.

A DE-400 -- briefly called the "Duane Eddy Junior" -- was added to the line as a more affordable option with the same construction features but less fancy cosmetics in early 1963. Both models are among Guild's most highly regarded electric guitars today but were not good sellers at the time, especially this very expensive DE-500. While Duane Eddy's music appealed primarily to teenage players, this instrument was priced as a high-end professional guitar, so missing its main audience entirely! As a result the model sold a paltry total of 41 units from 1965-1970, far less than most comparable 1960s guitars. Many of these went overseas, where instrumental rock and Duane himself remained more popular than back home in the US.

Despite this market mis-calculation the instrument itself is a wonderful creation. This deluxe 17" thin hollowbody guitar is sonically fairly unique, different from nearly all contemporary 1965 Gibson or Gretsch offerings. It has a slightly livelier acoustic sound than Guild's very popular Humbucker equipped Starfires -- mostly due to the spruce top -- and is quite a versatile instrument. The De-500 is excellent for anything from straight-ahead jazz to country to garage-band rock, and of course Duane Eddy songs! Although never the popular a model Guild might have hoped for, the DE-500 is now considered about the most desirable of all the company's 1960s creations. This is a wonderful guitar and simply a great thinline hollow-body by any standard.

This is an very clean instrument for more than 55 years on, and easily one of the nicest Guild electrics we have had. The finish shows only some light general wear with dings, dents and chips here and there but not a lot of actual play wear. There is a slight rough spot in the finish on the back of the neck around the 7-8th fret area probably from strap contact but hardly any other worn spots. The gold plating shows typical wear but is largely intact, with some worn-down sports most notably the top of the bridge and the vibrato arm. There is no binding deterioration at all and hardly any celluloid shrinkage.

The guitar was refretted not too long ago at Glaser's in Nashville with wire somewhat larger than the 1960s Guild standard, making it a comfortable player for the more modern stylist. The nut was replaced as well. All else remains original. The original case is present with a passel of paperwork including the warranty card is still in the pocket. Oddly enough Guild only issued Duane Eddy models in a full-depth case; apparently with sales so low they did not think it was worth ordering special slimline 17" cases to go with them! Despite its commercial failure when new the Duane Eddy DE-500 is truly one of the finest Guild instruments of its era, simply a lovely guitar...even if you're not a Duane Eddy fan! Excellent Condition.
×