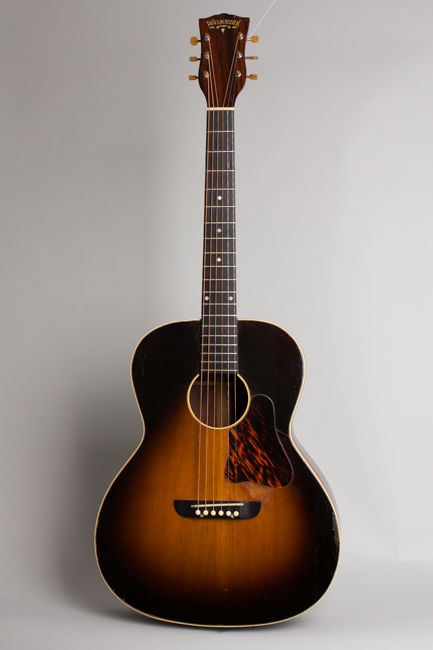 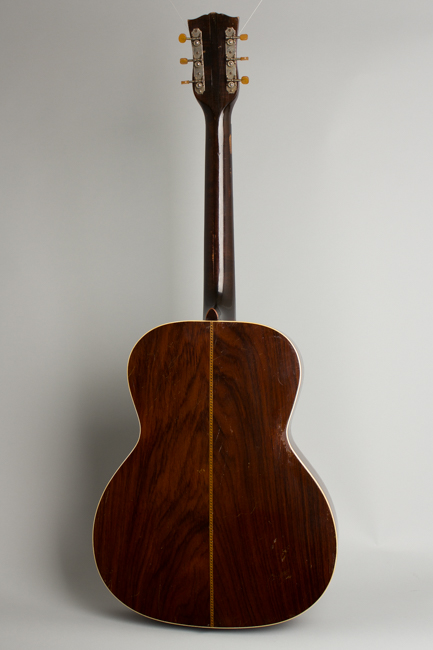 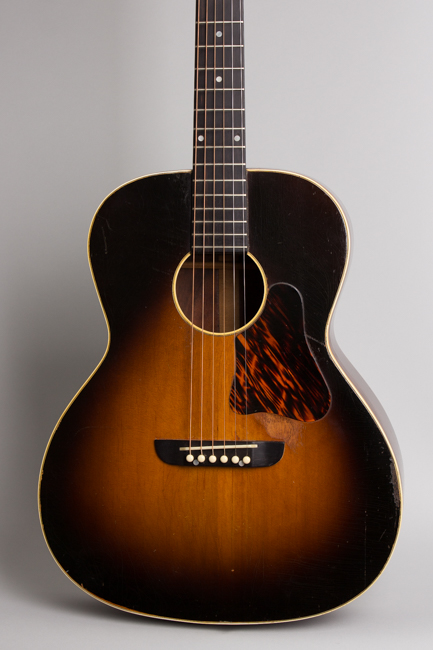 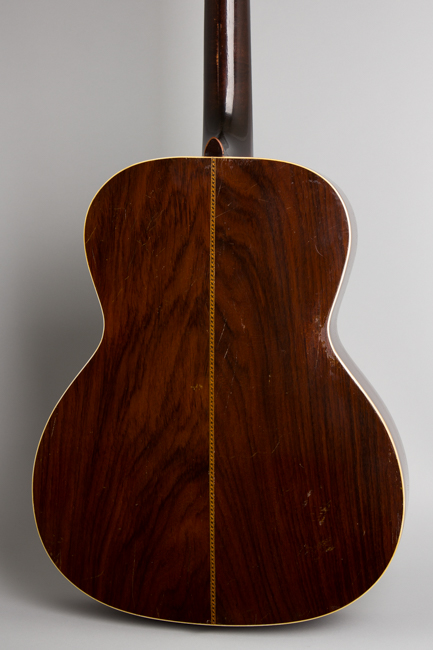 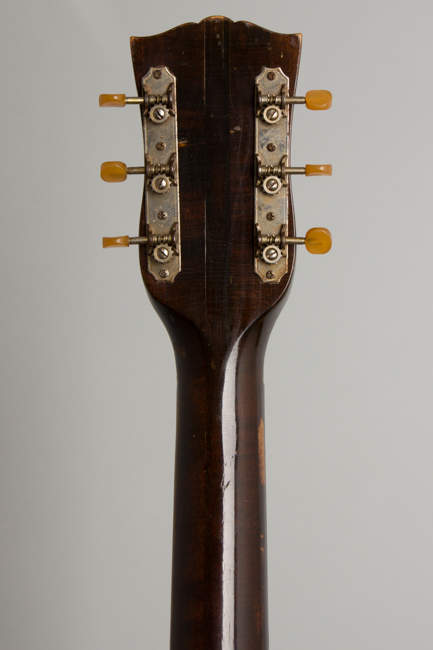 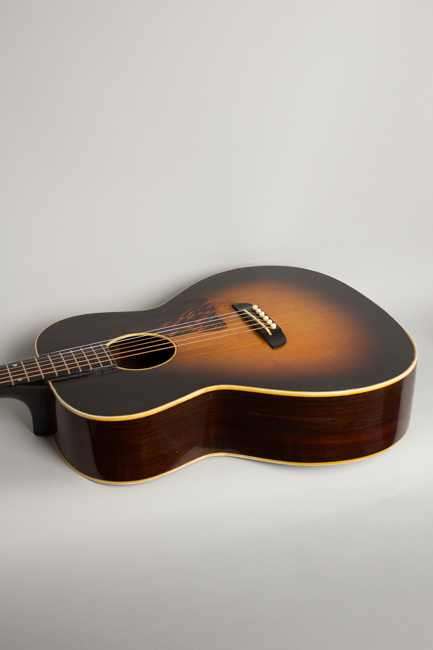 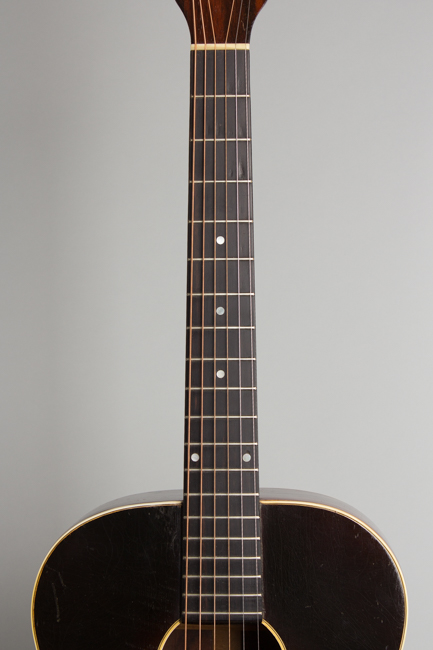 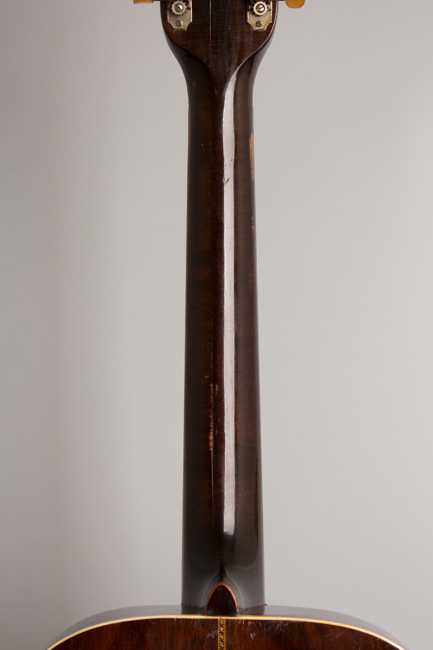 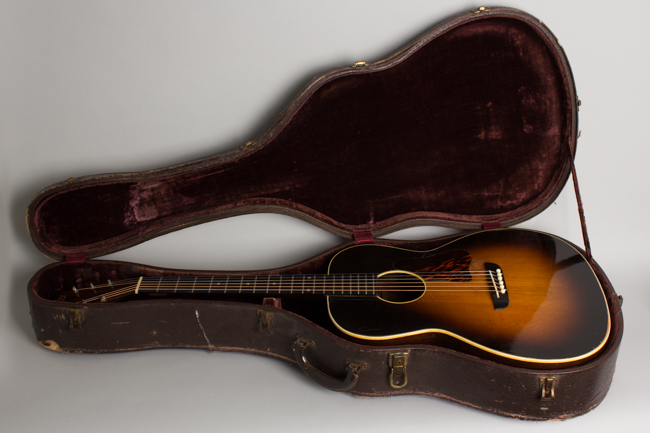 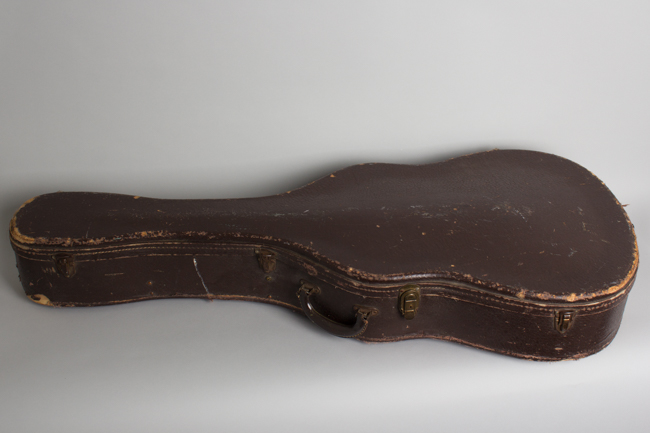 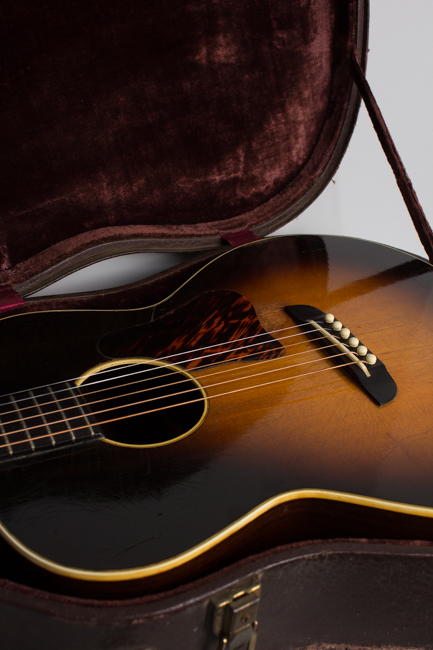 This is a very rare and extremely interesting pre-war flat top showing a lot of old repairs but a spectacular instrument nonetheless. It was made by Gibson for Chicago-based jobber Tonk Bros. who owned and operated the Washburn brand name in the 1930s. In both size and shape it is unique among Gibson flat tops, mating a narrow waisted nearly 16" jumbo body made of rosewood to a multi-laminated maple neck. Gibson rarely built rosewood flat tops, and this model is the most unique of the bunch with no Gibson-branded equivalent. While most off-brand Gibson products (Recording Kings and Kalamazoos, for instance) were definitely built to a price, Washburns were priced and sold as premium instruments and the construction and materials were not compromised to save a few bucks at Kalamazoo.

Tonk Brothers used a fairly confusing, oft-changing system of 4-digit stock numbers and names to codify their Washburn line in the 1930's. This guitar has the plainer cosmetics of the model 5246 Solo, but is built of rosewood with a sunburst top which was specified for the Model 5249 Solo Deluxe. The 5246 was Tonk's next-to top of the line flat top in 1938-9, under the 5249 so this guitar is sort of a halfway point in between those two catalog specs! The instruments had been sourced from Regal up through 1937, then the next year Gibson took over production of the higher grade pieces which may have led to some of these inconsistencies. Why this happened is not recorded; some say Tonk and Regal had some sort of business falling out, or it is possible Gibson simply quoted a lower price that year.

At any rate this is an X-braced rosewood "large auditorium" Guitar, 15 3/4" inches wide. The body has a narrower waist than Gibson's own Jumbos, which changes its character both visually and sonically. The back and sides are nicely figured rosewood finished natural, bound and with an elegant chain backstrip. The top is made of tight-grained Appalachian spruce in a dark sunburst livery, with a pickguard made of Gibson's "firestripe" celluloid in a more typically Regal shape. The soundhole edge is multi-bound but there is no rosette ring, another Regal-style feature. The bridge is a simplified version of the traditional Washburn "Smile" design, with the two bolts (under pearl dots) that Gibson typically used in the '30s to help hold them down along the back edge.

The neck is made of 5-piece laminate maple, fairly slim for the period with a soft "V" profile and a 24 3/4' scale length. It is finished in shaded dark lacquer with an unbound, dot inlaid rosewood fingerboard and Gibson's period thin "French" heel design. The Washburn name is inlaid in pearl in the large rosewood-faced headstock, the tuners are pre-war Kluson strip units with beautiful amber plastic buttons.

These Gibson made Washburns were not budget brand instruments; they were sold at prices comparable to Gibson's own merchandise. They are all extremely rare, especially the pro-grade models like this one. The only available figures suggest approximately 35 of the model 5246 were ever made, and how many were rosewood is open to question. This is an extremely well-crafted, high-grade instrument made with the finest materials available to Gibson at the time.

This is a loud and responsive guitar with a tone that has a "Gibsonic" character but with the rosewood depth and the added midrange tightness of the slightly smaller body. It has no close equivalent in Gibson's, or really any one else's pre-WWII line. The Regal-built versions are fine guitars but sonically do not approach the majesty of this product of Kalamazoo. As an interesting footnote unused laminated maple neck blanks for these instruments left over at Kalamazoo found their way onto Gibson flat tops during WWII, when *anything* that could be used was! It seems Gibson made plans to build more of these Washburn Jumbos but somehow it never happened, leaving this as one of the company's more fascinating prewar rosewood rarities.

This guitar has had a lot of very carefully done repair work, to a very high standard. It would appear this was at one point a real labor of love restoration, and considering the quality and rarity of the instrument we are very glad someone had it done! The guitar is a very good playing and great sounding instrument, a truly unique piece of Gibson -- and Washburn -- history.

The finish remains original with some touch up as necessitated by a number of crack repairs. The lacquer shows the broad checking typical for Gibsons from this period and some general play wear. The top has dings and dents but less pick wear than many, except for small scratches just above the strings, a deeper scratch by the treble side waist and a larger spot worn through into the wood off the back edge of the pickguard. There is also a deeper worn-through area on the curve of the lower treble bout. The back, sides have typical dings and dents but for the most part are not heavily worn. The five ply laminate neck has some finish loss near the fingerboard in the lower positions and at the spine of the neck around the ninth fret.

As noted there are a number of crack repairs, all very well executed. The bridge is a very high quality replica of the original, showing some chipping, finish loss and minor patching around the edges. There are four cleanly sealed and touched up spruce grain splits heading from the bridge to the tail block running back along the grain. There is a sealed and cleated top crack extending from the edge of the treble side lower bout near the heavily worn spot at the apex of the top at the treble side lower bout. There is also a sealed grain crack next to the fingerboard extension on the bass side.

There are long crack repairs along both sides around the lower bout rims. on the bass side this runs back from the waist almost to the tailblock. On the treble side rim a similar crack situated slightly closer to the top edge also runs from the waist to the vicinity of the tail block. There are a number of rosewood grain cracks to the back, all tightly sealed: two in the treble lower bout, three in the center next to the center strip, one short crack at each waist and three more short cracks at the edges near the binding. While obviously this instrument has had a great deal of work to all this, the associated finish touch up requited is not overly conspicuous and the results are better than the foregoing catalog makes it sound!

The original small maple bridge plate is intact and internally the guitar remains unaltered, except of course for the evidence of the sealed cracks. The neck has been cleanly re-set with what appear to be the original frets (slightly re-crowned) still in the ebony fingerboard, which shows some minor divoting in the lower positions. This is simply a wonderful and exceptionally rare pre-war flat top, a tribute to the maker (Gibson) the tradition it carried (Washburn) and the obviously highly skilled luthier(s?) who ensured it survives well into the 21st century. It resides in what appears to be the original hard shell case. Excellent - Condition.
×