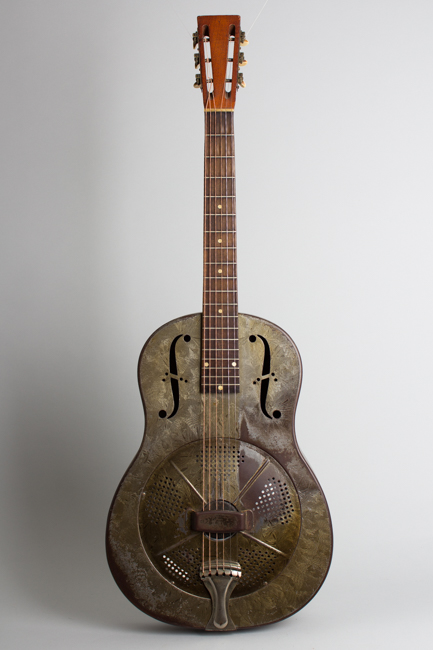 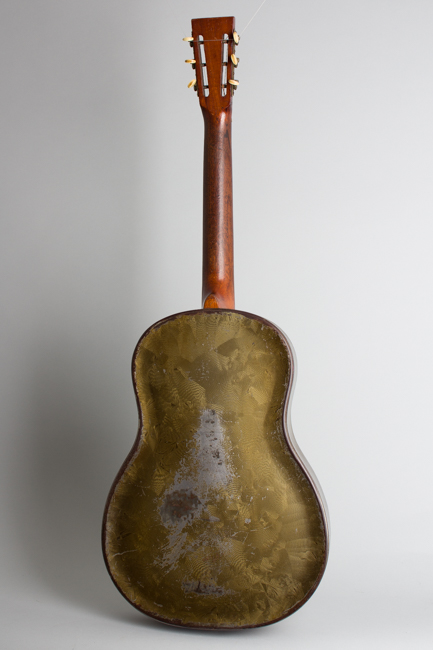 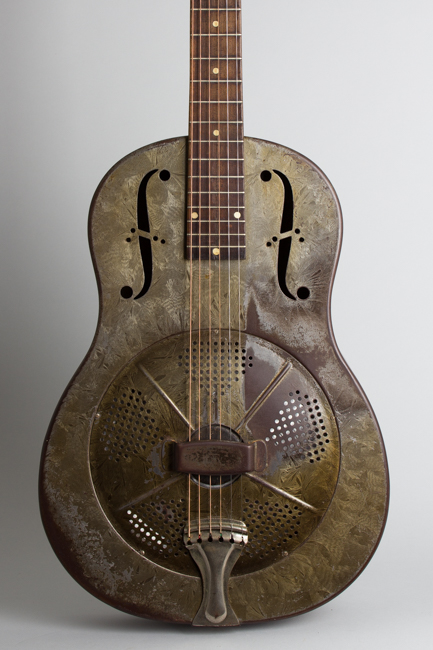 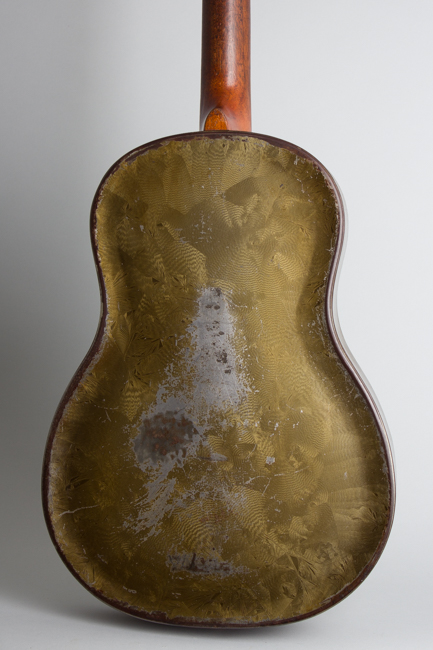 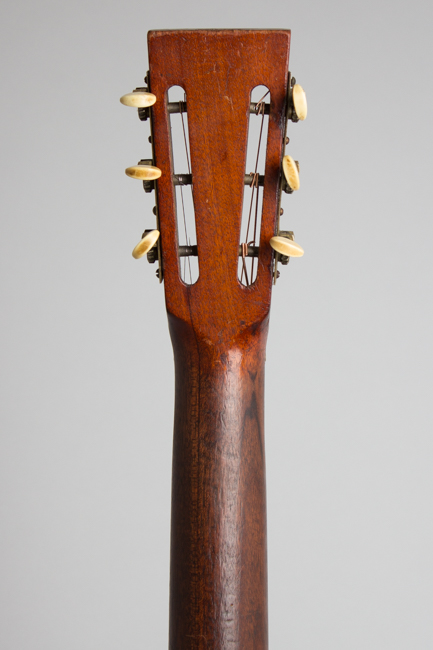 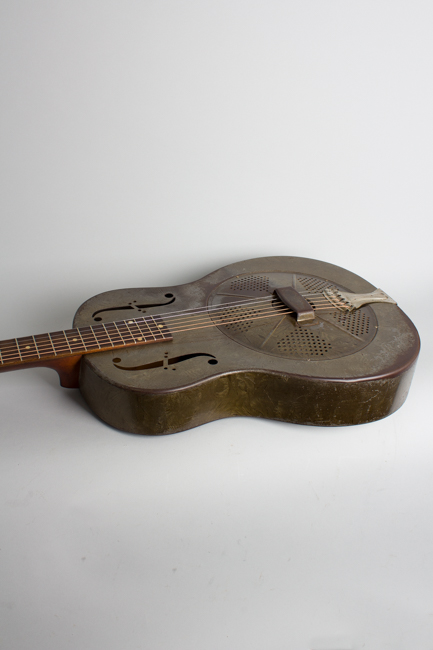 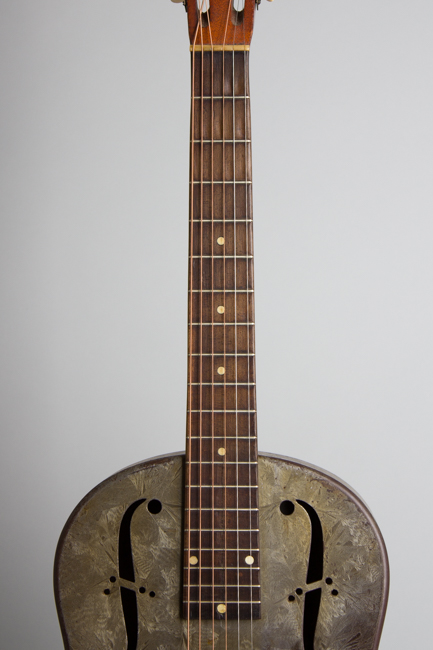 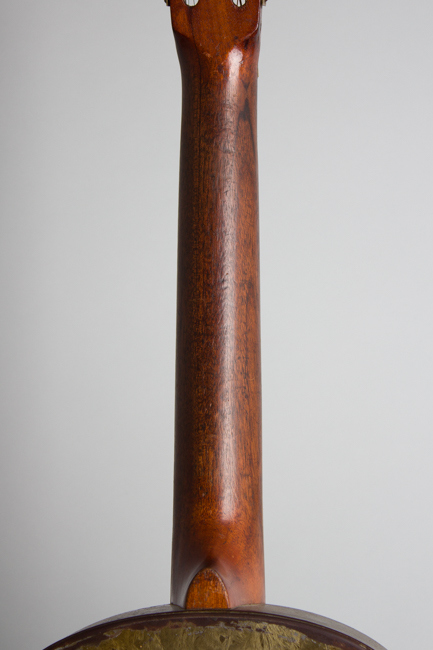 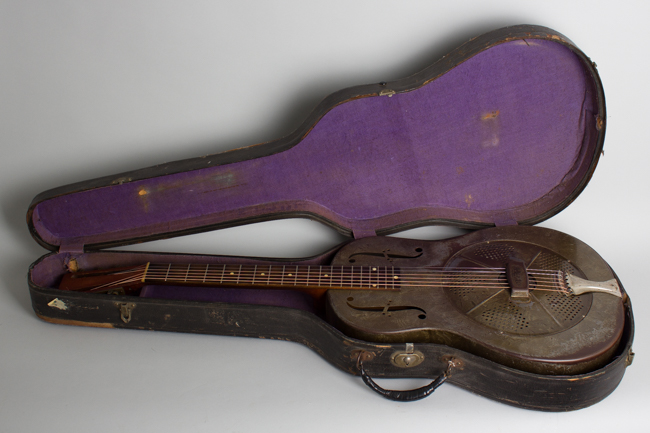 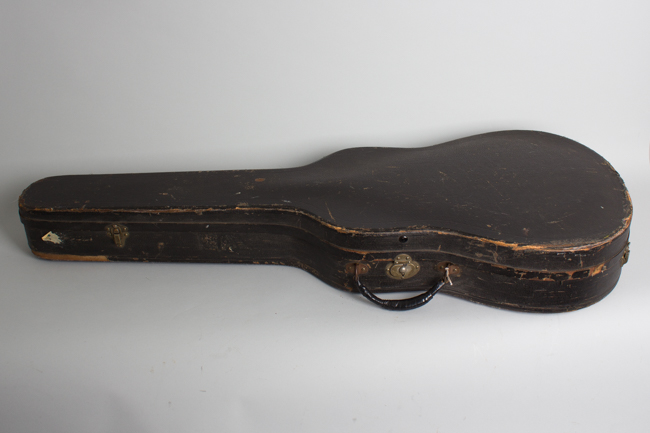 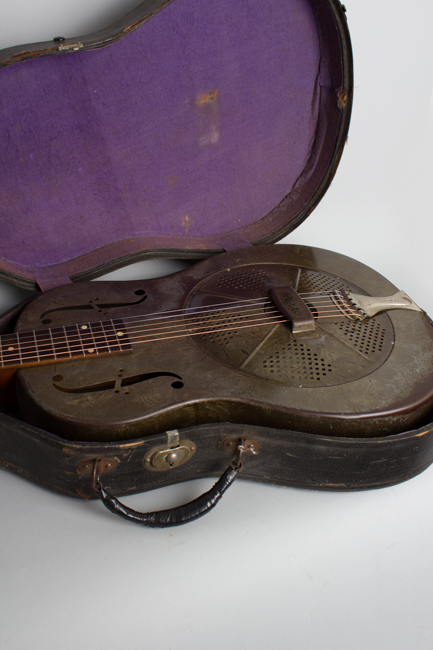 This guitar is a rare variant of the generally not-rare National Duolian sold not by the company's usual jobbers but directly to the public by the country's greatest catalog merchant Sears, Roebuck & Co. In the most severe year of the great Depression, any sale was a good sale and National contracted with Sears to provide these instruments directly to them at a special price. The guitar is identical to National's lowest-end metalbody instrument, the Duolian, except the coverplate has fewer holes in a simpler pattern and there are no headstock markings except an "R" series (for Roebuck!) serial number and patent marking on the top edge. The neck is natural finish mahogany with an 'ebonized' maple fingerboard and is very deep and chunky with a slight 'V' contour. The fingerboard dots are ivoroid plastic instead of pearl, and the board is unbound. The finish is the standard Duolian green crinkle with a lot of patterning in the paint.

These guitars sold for $29.00 (plus freight!) originally while a regular Duolian retailed in stores at $32.50, and were thus a great value exclusively for Sears' customers. The documented serial numbers suggest that only around 600 or so of this model were sold, compared to literally thousands of National-branded Duolians. The arrangement was quite short-lived for whatever reason, and national did not pursue further such wholesale arrangements in the 1930s. This guitar is both an interesting rarity and a great-sounding steel body National, with a cool story and a great vibe!

This is a well used but still very original and great sounding National. There is general overall finish wear, especially to the back of the neck which is worn down to the wood over much of its length. There are two extra small holes drilled near the decorative F-holes on either side of the upper bout; the reason is lost to history but at least they harmonize well with the design! There is also a small hole in the bass side of the headstock, near the low E tuner, similarly a mystery.

The tuners, tailpiece, and frets are all original, the cone and biscuit appear original as well but the string saddle and nut have been replaced, long ago by the look of it. The instrument is set up with a medium/low action and is perfect for delta-style blues playing. A very battered original National HSC is included. The Sears connection gives it an interesting history, but the real star on this guitar is a killer vibe; it has been really well played and probably been some interesting places over the past 90 years! Very Good + Condition.
×