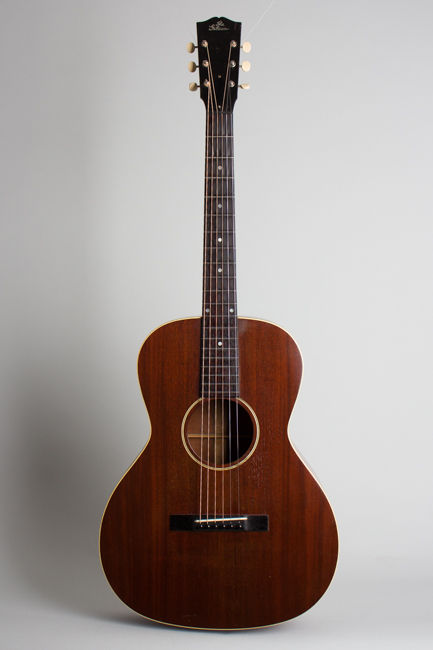 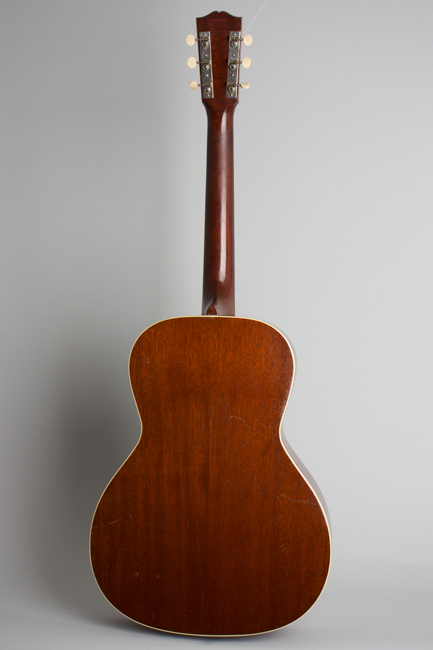 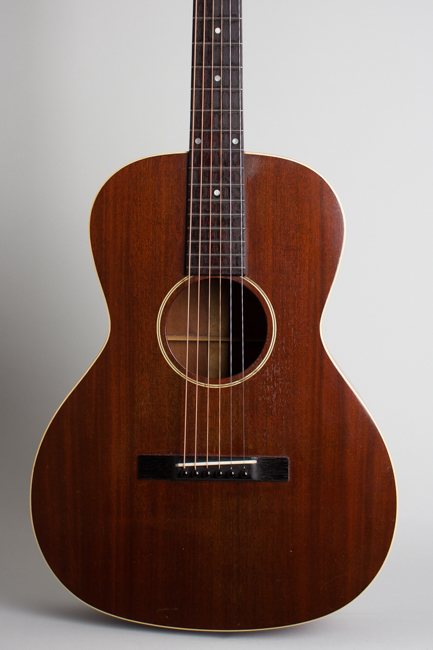 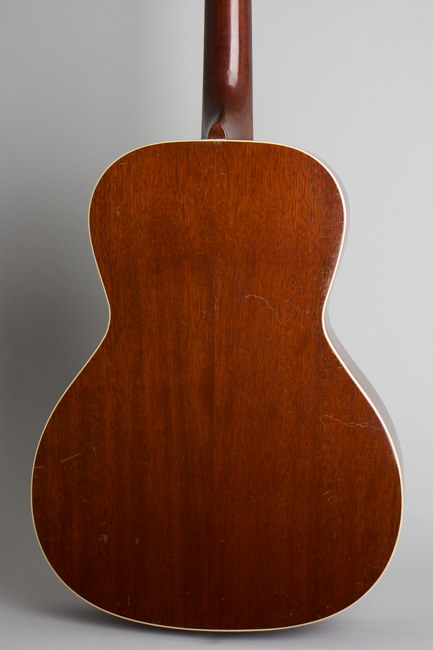 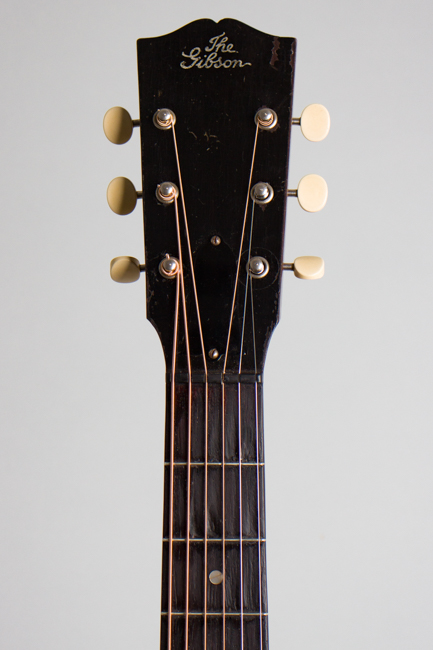 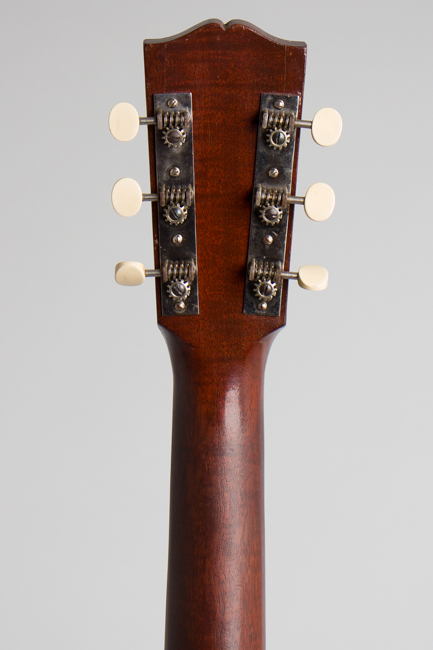 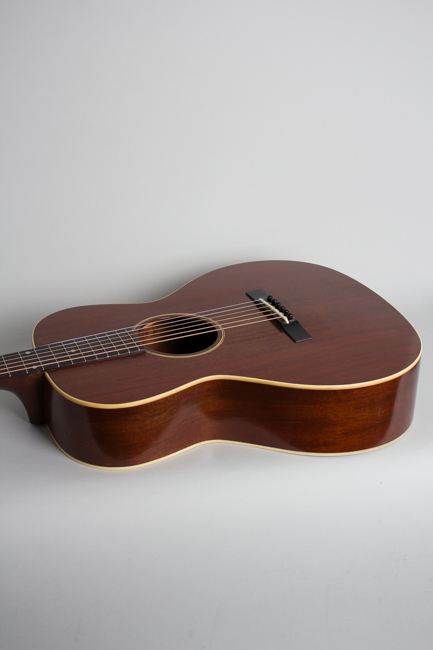 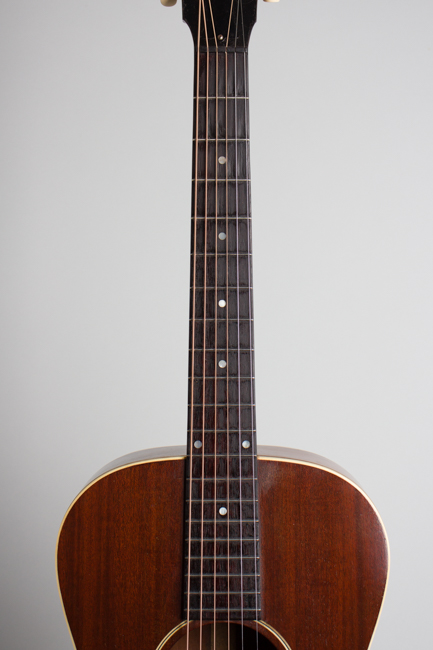 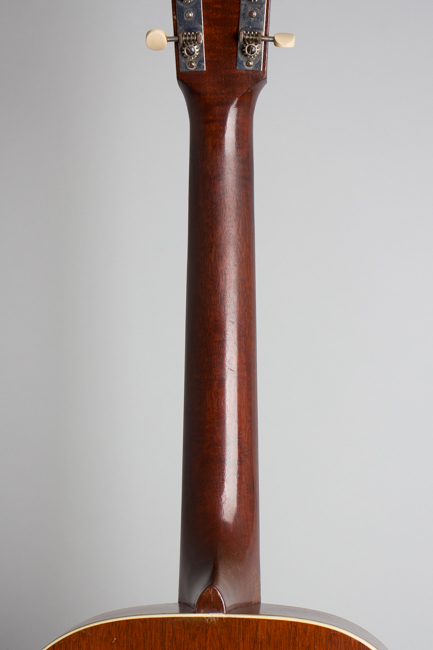 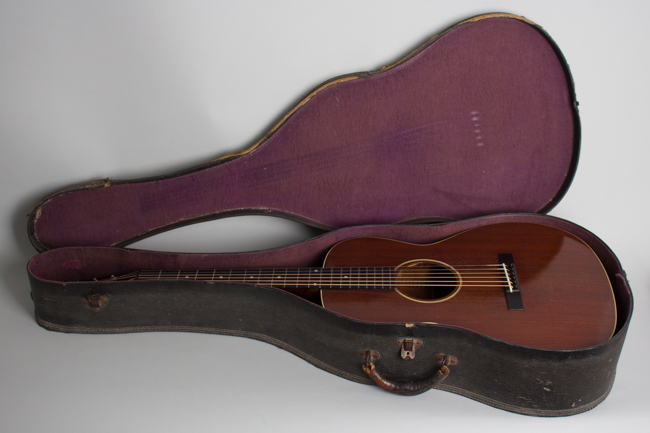 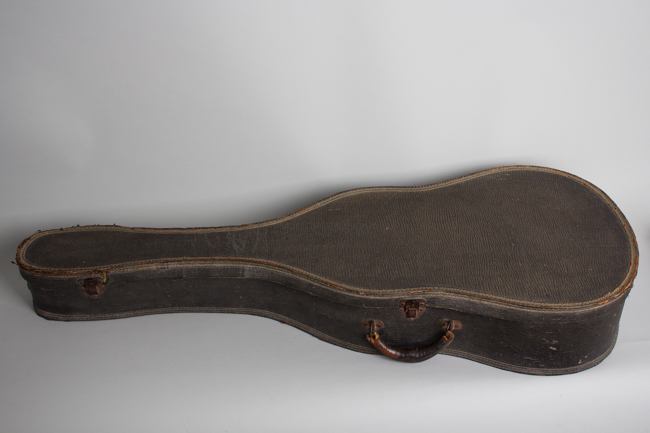 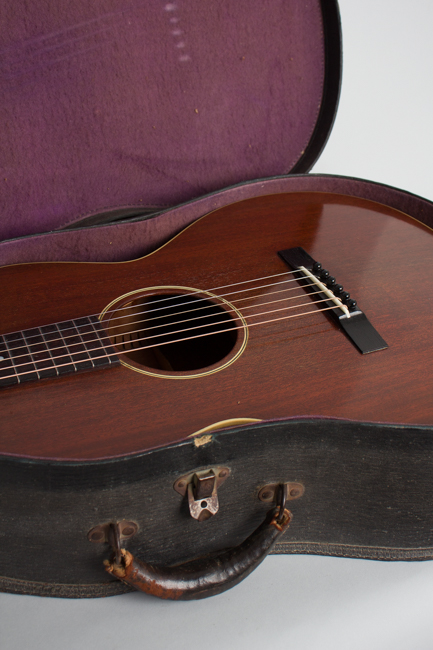 This instrument is a particularly fine, very well-preserved example of a rare and wonderful Gibson flat-top produced only for a brief period from late 1929 into 1931. This all-mahogany, X-braced L-0 dates to late 1930 combines features from earlier and later eras into a unique package. The most notable difference from later models is a 12-fret neck joint, a holdover from the 1920s; Both Gibson and Martin would soon adopt a 14-fret design as standard for flat tops. With a clear natural dark mahogany finish and white celluloid accents, this L-0 maintains an austere but elegant 1920s look but is built on the more "modern" larger body of a 1930s flat-top guitar.

The wider, less rounded body shape and X-braced top introduced on these models in 1929 would be subsequently used on the 14-fret L-0 and L-00 throughout the 1930s, but the older thin natural lacquer finish and small silver script "The Gibson" logo were gone by 1932. This neck has a very comfortable and surprisingly slim rounded "C" profile, quite unlike the deeper heavy "V" adopted for these models soon after.

These earliest 12-fret L-0s also feature exceptionally light construction, even compared to mid-1930s examples. While we are partial to all pre-WWII Gibson flat-tops, we find the L-0 from this year to be a particularly attractive-looking and a fabulous-sounding guitar, and an exceptionally responsive instrument. There is a hand-written tag in the case pocket reading "L-0 $35"; all we can say is "Those were the days"!

This all-original L-0 is not absolutely pristine but still one of the cleanest and best preserved of these early Gibson flat top guitars we have seen. These all-mahogany instruments are *very* lightly built and almost never survive in this kind of condition-most survivors are found heavily worn and/or much repaired. This guitar has never had even a single crack, which is somewhat miraculous. The very thin lacquer finish has some typical light micro-checking and minor dings, dents, scrapes and general handling wear, but none of the heavy pick marks usually seen on the top. The finish on the back and sides has some small dings and scrapes but no major wear. There is some light finish flaking near the top edge of the headstock probably from ancient exposure to moisture.

The very lightly built X-braced top is extremely solid; indeed the entire guitar is structurally sound and unmolested. The original small rosewood bridge has never been cut down, and internally everything is very clean, including the very slim braces and tiny bridgeplate. The neck was reset with some minor finish blushing and discreet touch-up around the heel and fingerboard edges. The bone saddle is newer and slightly taller than the original; this guitar can now go another half-century or more without needing a further neck reset.

The frets appear to be the original very small wire still with a good height; there is some fretwear in the lower positions. The fingerboard does have some noticeable divots in the first position, but playability is not affected. The original tuner plates are still shiny with the original composite white buttons and even the black plastic bridgepins and endpin are all original. This guitar plays sounds fantastic, with more depth than many of these and plenty of volume even played lightly. As early depression-era Gibson flat tops go this is about as nice as they come, still residing in the original 1930 heavy chipboard case; a modern molded HSC is also included. Excellent + Condition.
×