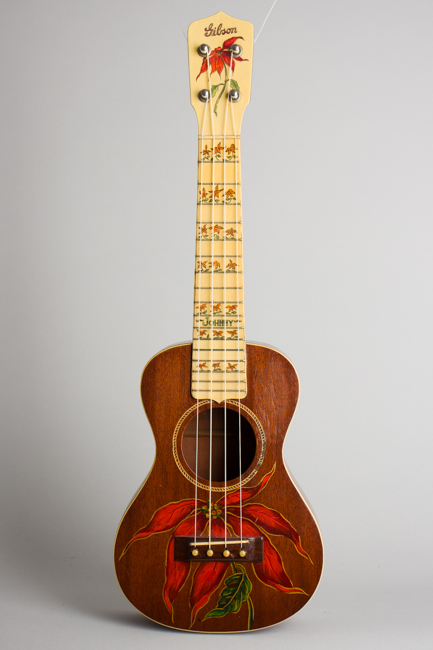 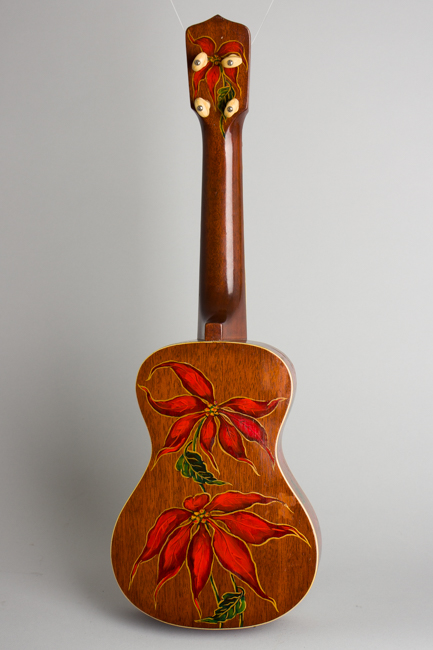 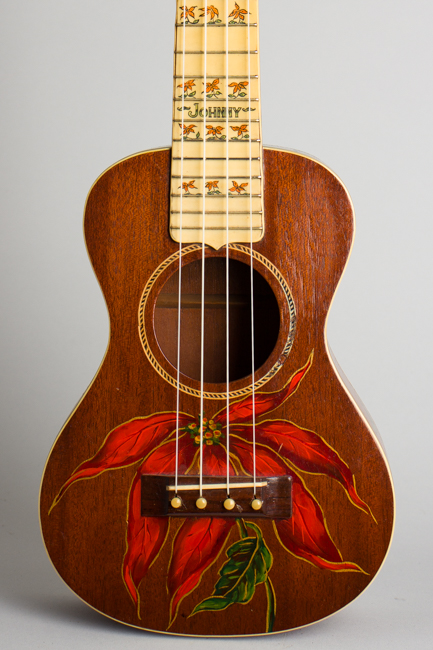 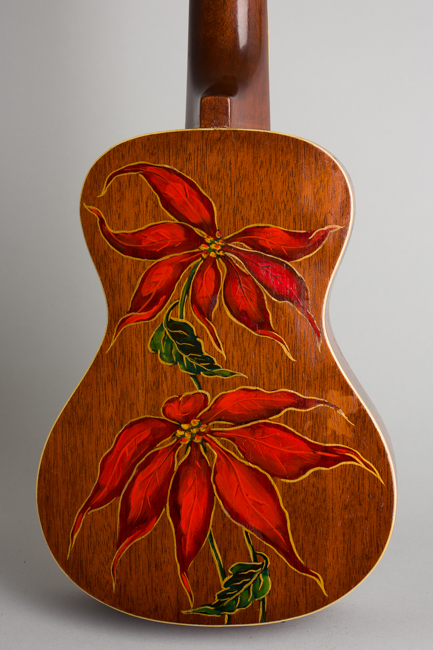 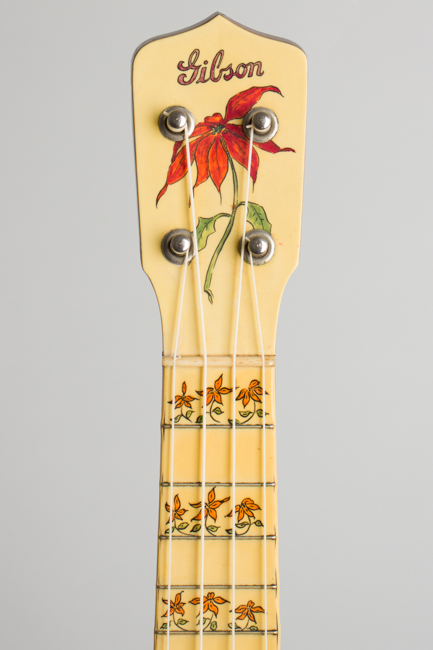 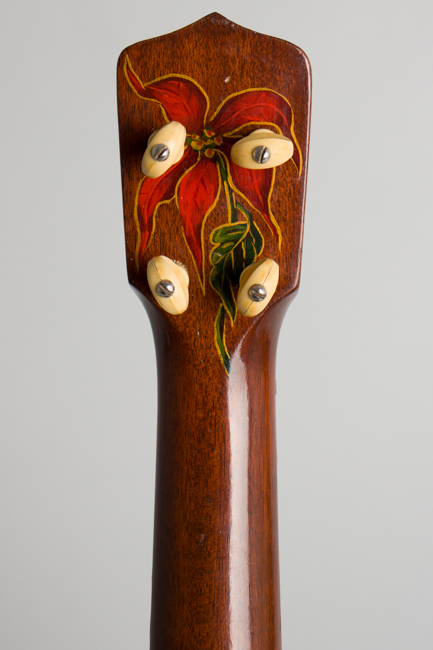 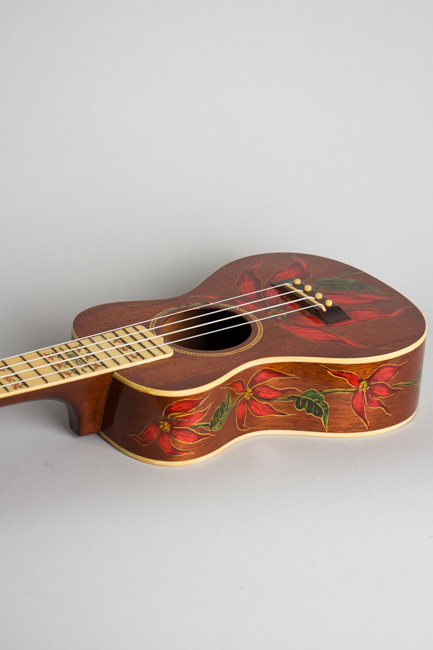 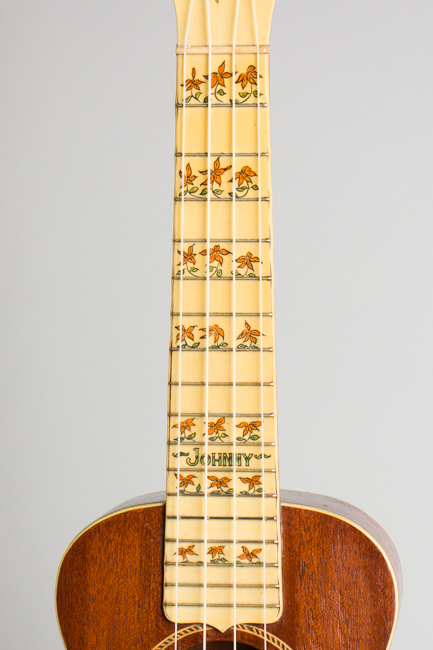 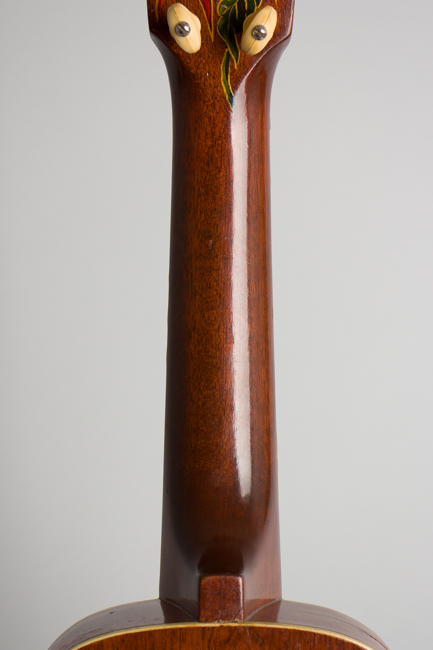 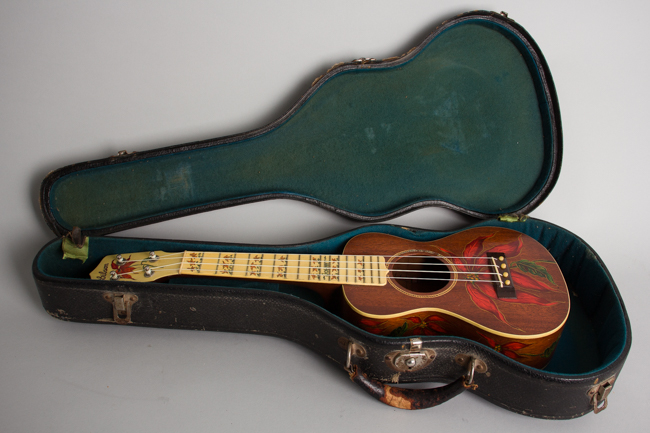 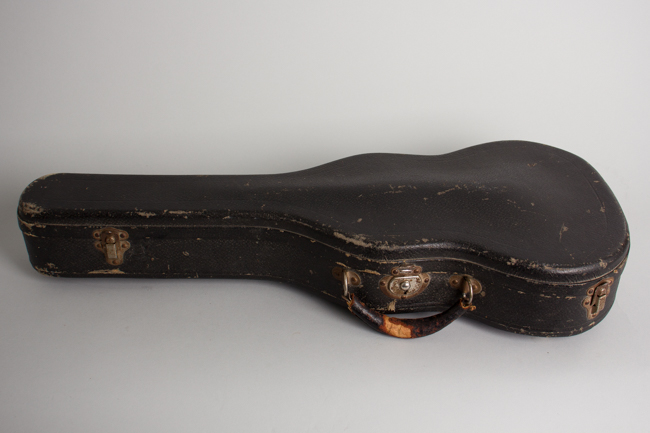 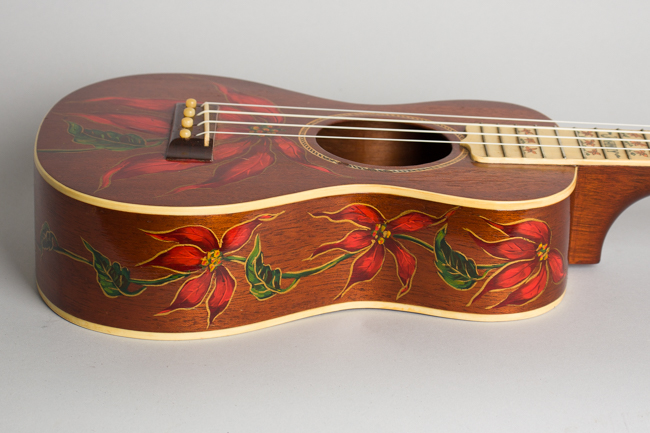 In the pantheon of vintage ukuleles there's really not much of anything that tops Gibson's beautiful if somewhat over-the-top decorative Poinsettia Uke. Martin's pearl trimmed 5K model is often referred to as "the holy grail of ukuleles" but that was a catalog model, offered for nearly 20 years and made in decent if limited quantities in the opulent 1920s. Gibson's custom ukuleles were each individually ordered, extremely rare by any standard. They were offered from around 1928 into the early '30s; this appears to be a fairly late example based on the "Gibson" logo on the headstock instead of "The Gibson".

There are decorative features everywhere, from the finely detail painted ivoroid headstock and fingerboard to the incredibly elaborate hand-painted poinsettia floral decoration on almost every wooden surface that gives the instrument its unofficial nickname. These are completely hand done in multiple colors with gilt edging. Why this particular motif was chosen the answer is lost to time; it could simply be that Gibson had an employee (or contractor) who loved to paint these flowers! Whatever the rationale, the work is truly beautiful, highly detailed and extremely striking from any angle. The headstock has a very finely hand-painted Gibson logo and single poinsettia on the ivoroid face, while the fingerboard has a 3-flower array at each marked position and "Johnny" between the 10th and 11th frets. Take that, Martin and your pearl-inlaid style 5!

Gibson did not actually picture an instrument in catalogs, with a small note on the late 1920's Catalog P and Q ukulele pages offering "Gibson Custom Built Ukuleles to Order. Something entirely new. Custom built instruments in lavish splendor of ornamentation and finish. Hand decorated...write for details." Gibson had entered the ukulele market somewhat late, and this attempt to capture some high end business seems to have seen limited success. By some estimates only five or so Poinsettias are known to exist and each seems to have unique features.

This one is especially unusual, as it is built on a larger body than a standard soprano, the only one like this we are aware of. The unique body shape has a tighter waist and a sharper upper bout than other Gibson ukes; it actually more resembles the company's tenor guitar layout, though much smaller. The pin bridge is also more in to the early tenor uke/guitar pattern than the standard tied-string uke bridge. One odd-looking feature is an extra large soundhole, the size used on Gibson's larger "TU" Tenor Uke model. It is impossible to know if this was part of the original order or simply the template Gibson's workers happened to use! At any rate the "soundhole-to-top ratio is unusually large, but this does not cause any issues with stability.

This unique little Gibson was custom ordered around 1930 by a player named "Johnny" who apparently had some degree of radio success in Texas in the early 1930s. One assumes he was a gigging player, as radio work alone would not actually require such a flashy instrument! His family recalls he had fairly large hands, probably the reason the uke was ordered in larger than soprano size. He apparently used it for some time and then it was put away for decades. Johnny passed on some time ago and the family has only recently decided to send his prized uke out into the world to find a new home for the first time since c. 1931.

One other curio is as Gibson built this uke to a non-standard size, when it came time to ship it they did not have a case in stock to fit. As a result it was sent out in a somewhat oversize case designed to fit the "TU" model tenor uke, which it has resided in ever since. One wonders if "Johnny" was bothered by this, or if the instrument was so dazzling on arrival it hardly even mattered! Gibson's catalog "P" ukulele page ends with the blurb "Every Gibson brings the thrill that lasts a life time"; in this case, that appears to have proved true. This is as fine a ukulele as Gibson ever made, a genuine one-of-a-kind piece and simply a stunning instrument whether played or displayed.

The most notable finish disturbance is some strum wear to the top, but the great bulk of the painted graphics are very well preserved with relatively little worn away. The very thin clear lacquer overcoat has some very light checking, dings and dents but except for some specific areas is nicely preserved. That clear lacquer is worn through on the top on either side of the fingerboard extension, with a bit of light fingernail wear into the wood on the treble bout. There is some similar wear around the soundhole, with one very small piece of marquetry strummed away and a couple others worn into on the lower rim with what looks like a bit of small touch-up in that area. There are some worn-through areas on the back, but only small spots on the flowers have any loss.

The painted floral decorations on the celluloid fingerboard are somewhat miraculously fully intact, with hardly anything worn through. The binding has shrunk up a bit on the bass side of the fingerboard, so there are some feelable "fret bumps" along the edge. The only area of repair on the instrument is a small bash on the upper bass side bout, well sealed but visible. This caused a couple of short linear cracks and some very slight loss to the painted flower in that spot. According to the family story, the original owner's son caused this mishap as a young man, and was never fully forgiven even decades later! Other than this souvenir of that apparently never-forgotten incident the instrument is crack free and structurally excellent.

The only non-original parts are a set of beautifully hand-made reproduction bone bridge pins, the originals having gone missing decades ago. These are a fine complement to the instrument and barely distinguishable from the white celluloid originals. This is a very fine playing instrument, and about the best sounding Gibson ukulele we have ever encountered. It is still in the original-but-oversized Gibson tenor uke case it was originally delivered in, with a better fitted modern hard foam case included as well. Apparently the original owner was well pleased with this custom ordered, one of a kind piece and treasured it for the rest of his life. We hope the next owner will feel the same way. Excellent - Condition.
×