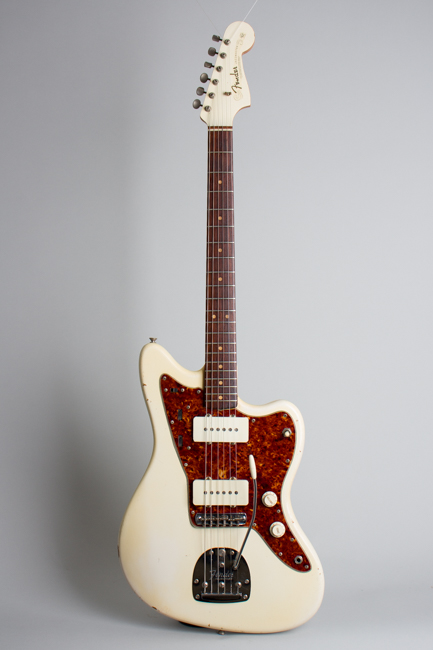 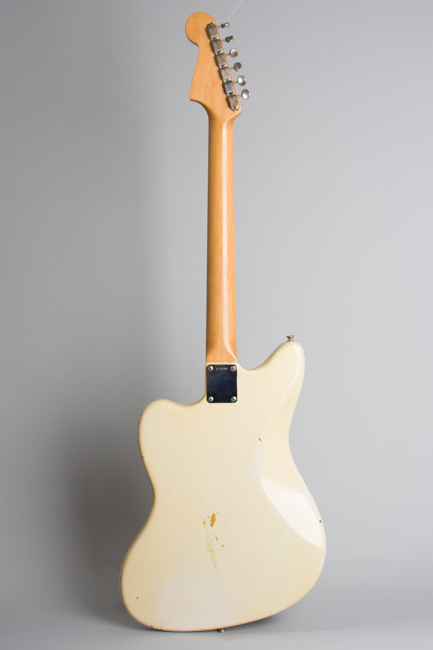 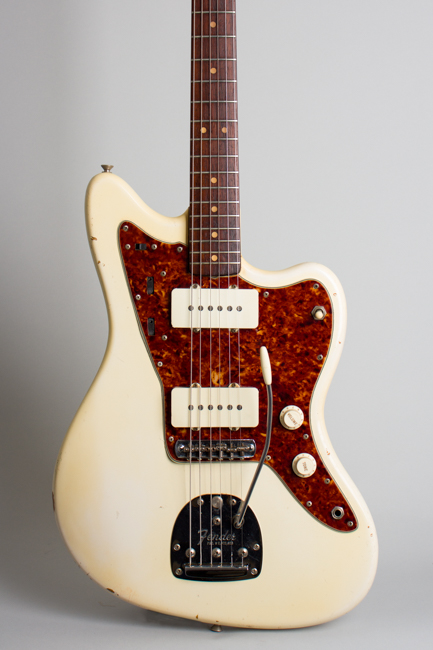 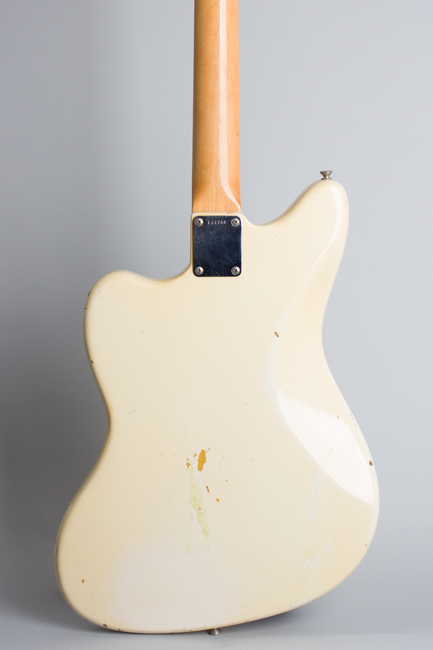 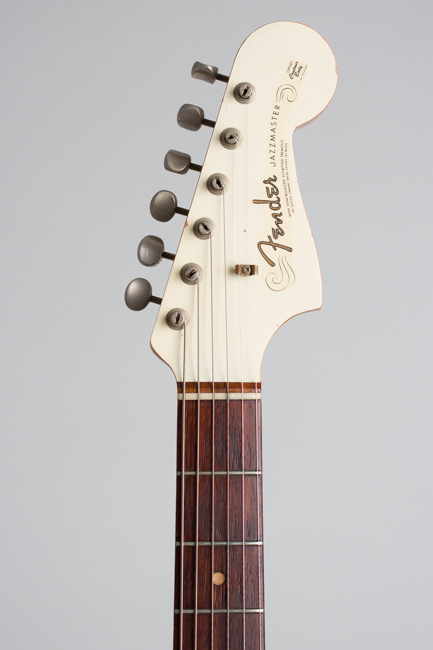 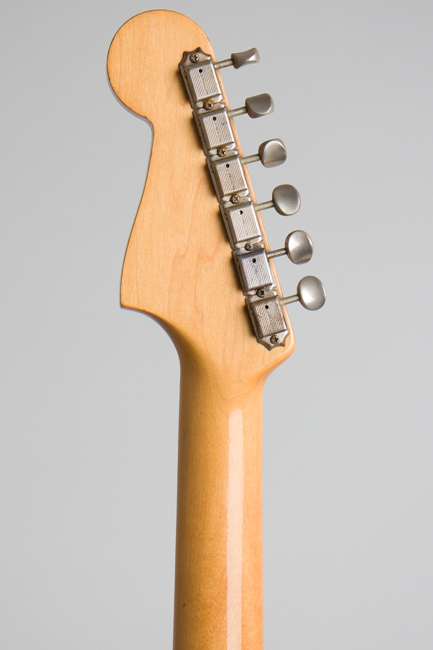 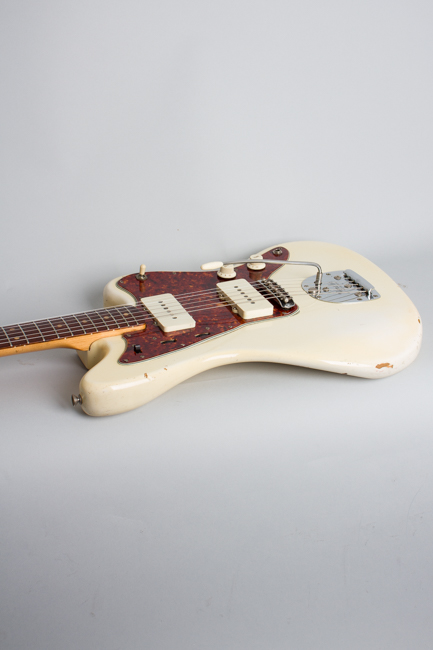 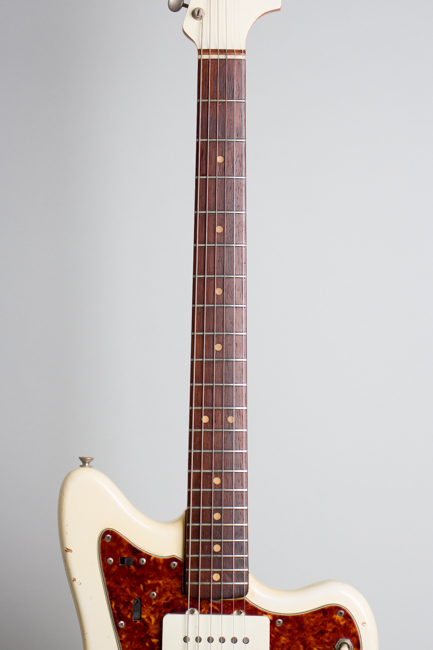 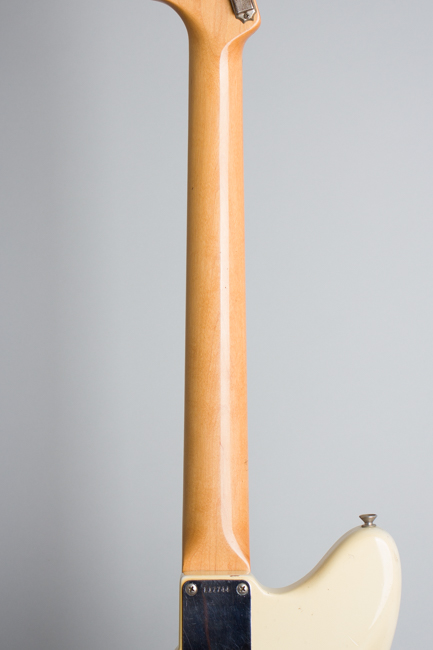 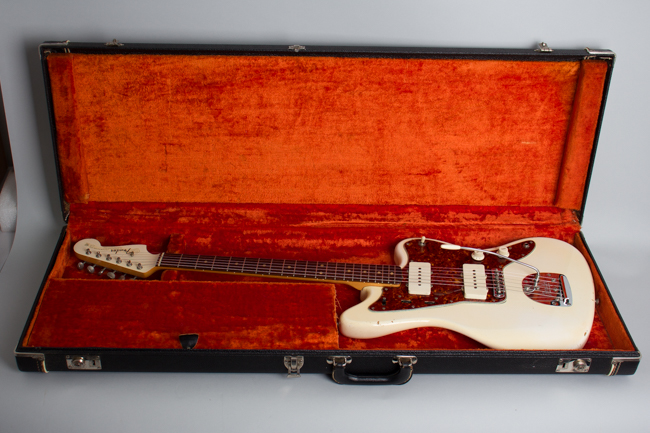 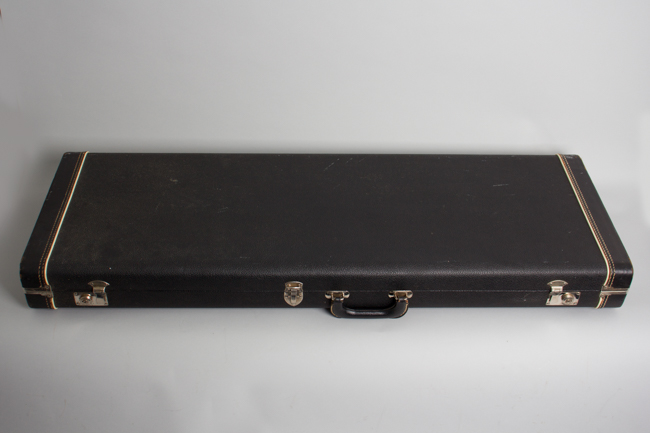 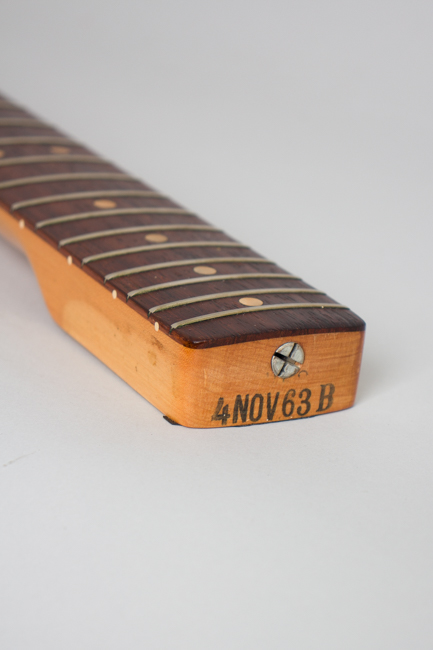 Vintage Fender Jazzmasters don't come a lot cooler than this one, a true Pre-CBS example sporting an original Olympic White finish on the body with the super snazzy matching headstock. This guitar has a neck date stamp of November1963; it was assembled about a year and a half after the Jazzmaster was supplanted by the Jaguar as Fender's top of the line guitar. No matter, this is still an extremely classy instrument in every way. It has all the classic 1962-64 Jazzmaster features and is simply a great example, an excellent player and superb guitar by any standard.

While custom color Jazzmasters per se are not exceptionally rare, they are most often encountered in the solid reds or blues that made up the bulk of Fender's available finish palette. Olympic white is far from the rarest hue applied to this model, but not the most common either; all these extra-cost finishes are exponentially rarer than the standard Sunburst. Custom Color instruments from 1965 and '66 are far more common than earlier models as well. This guitar's Olympic White finish on both the body and headstock have far less yellowing to the topcoat than many, and it has stayed truer to its original appearance.

Apart from the finish this beautiful Jazzmaster is loaded with classic pre-CBS Fender features. These include a "round-lam" unbound rosewood fingerboard with the pre-'65 "clay" dot inlay. The pickguard is the nitrocellulose tortoiseshell style Celluloid which was a Fender trademark at the time, contrasting beautifully with the white finish. The pickups are the standard white-covered Jazzmaster units with the two-circuit wiring introduced with this model. The neckplate sports a fairly low "L" series serial number, typical of late 1963/early '64.

These early '60s Jazzmasters are always fine instruments. While they never caught on with the jazz artists Leo intended them for, the Jazzmaster was quite a successful guitar at the time, seen with many period players in a variety of musical genres and widely imitated overseas. After a period in the shadows the Jazzmaster has been increasingly popular over the last couple of decades with new generations of performers re-discovering its particular charms. This one has survived years of use still resting in its original early black no-logo Tolex hardshell case. At 8.24 pounds it is lighter and handier than many 1960's Jazzmasters and also survives in better shape, played in with a major mojo and sounding fantastic, ready for its next 65+ years.

This rare and beautiful Jazzmaster has been played but not abused, a genuine Fender "relic" not an artificially created one. There is some light general play wear over much of the instrument but it remains all original, except possibly some of the bridge saddle screws. The finish shows some typical dings, dents and scrapes on the body, notably on the edges. The most notable wear is several areas of "strap burn" to the back, which has both discolored and worn sections of the finish. Fortunately this is only on the back of the body, where the guitar probably lay across a vinyl strap for a long period in a closed case. Generally the somewhat fragile Custom color finish has survived nearly six decades very well.

The clear lacquer on the neck is surprisingly little worn with only a few tiny dings and dents. The matching white headstock is also very clean with just some small chips to the edges. The decal is nicely preserved as well. The original frets show only some light wear and remain quite playable; The fingerboard also has very little wear.

The pickguard has some typical minor shrinkage but no cracks or broken corners, overall it remains quite nice with a lovely patina. All the hardware is original except some of the bridge saddle screws have likely been replaced as they are very prone to corrosion. Only the snap-on bridge cover is missing; all the hardware including even the trem arm remains original and everything works as Leo intended. The electronics are all original; a second supplementary ground wire was once added and later removed, leaving a bit of extra solder but no other ill effects.

This Jazzmaster is lighter than some from this period and is an easy handling, a great playing and fantastic sounding guitar. Sonically it has both considerable brightness and warmth depending on the pickup selection, with more natural "ring" than many even when not plugged in. This guitar was supposedly only played in church (that's the story anyway) and after the original owner passed away was left in the pastor's office for many years. We do feel if you're going to play for the Lord, a white Jazzmaster is an appropriate instrument to employ. This one is ready to move on, whether played in sacramental or secular mode, still housed in the original first-generation black Tolex HSC which has only fairly light wear overall and remains very solid. Excellent - Condition.
×