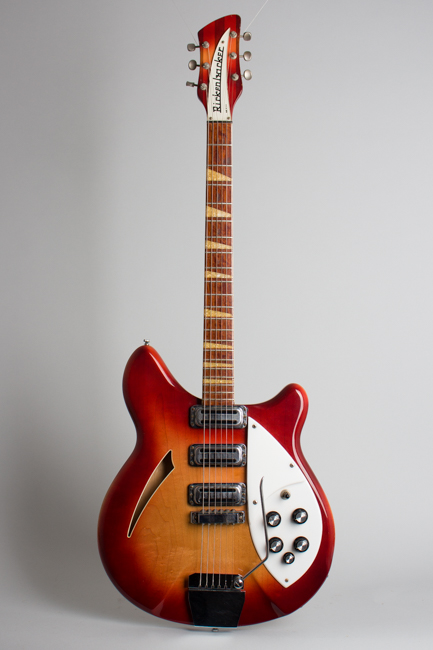 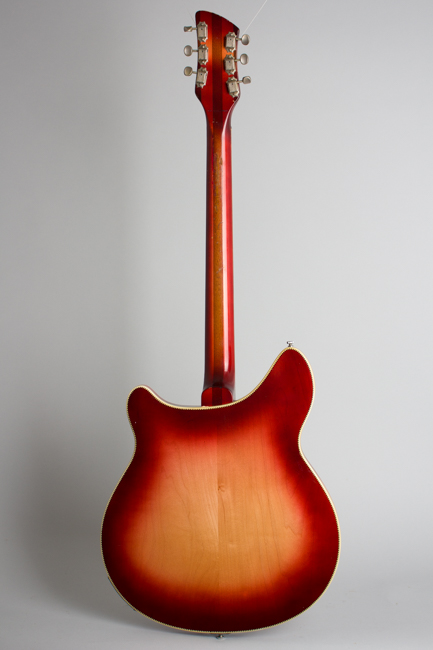 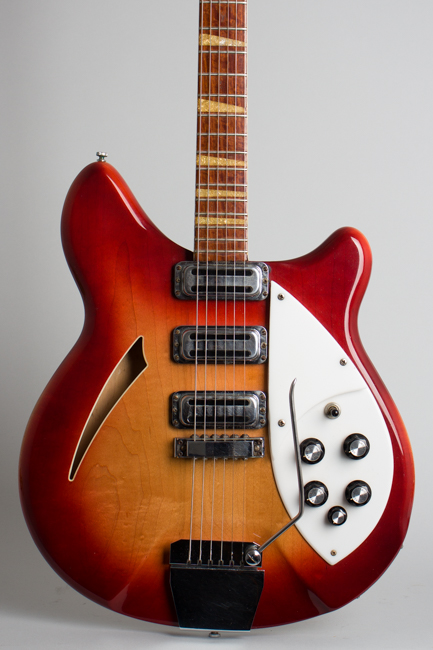 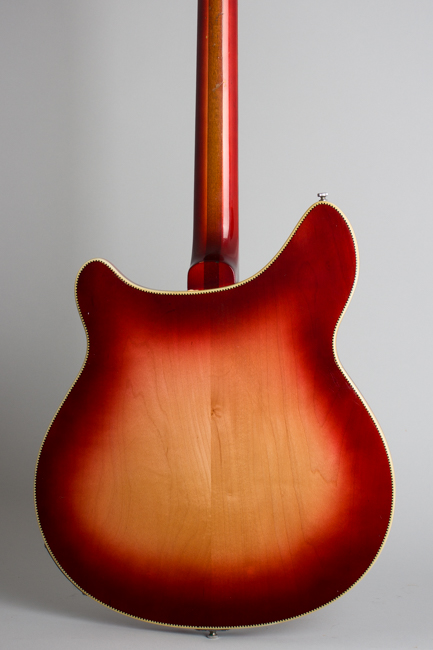 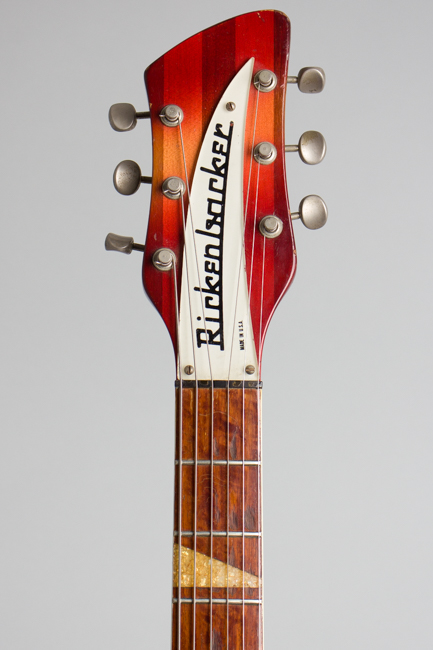 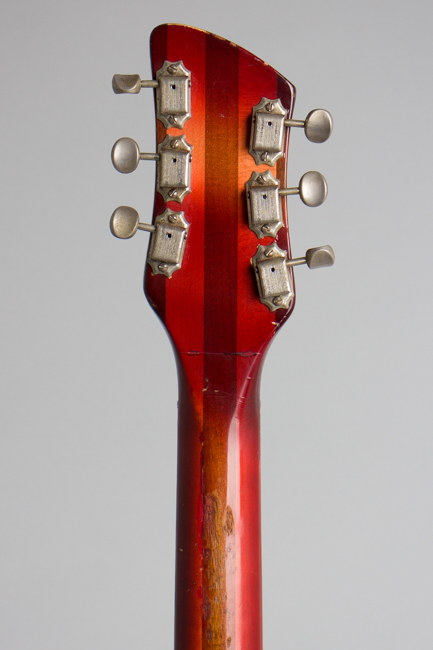 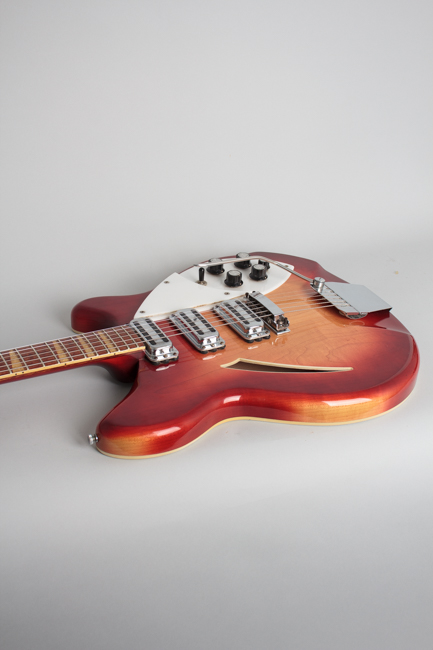 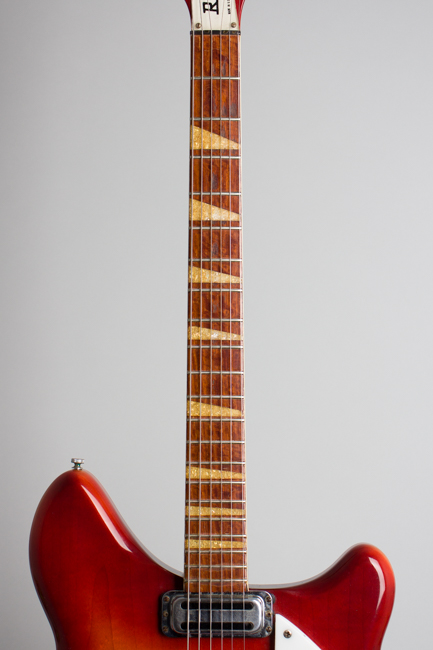 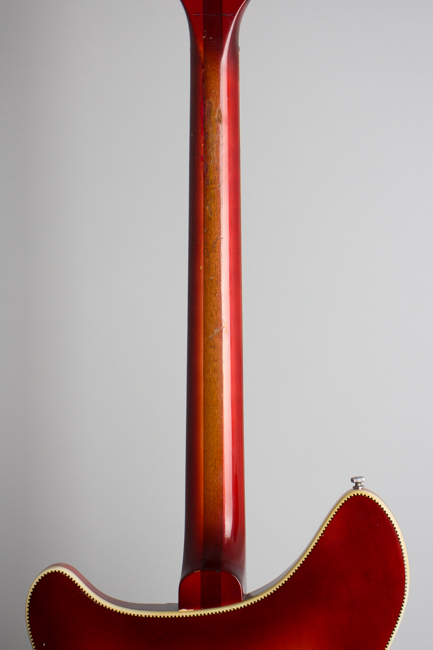 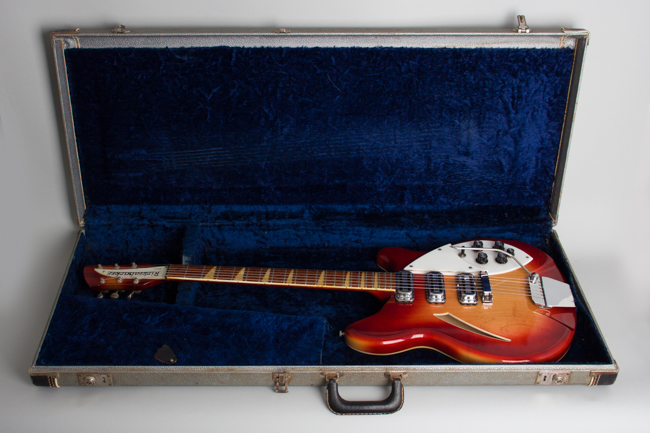 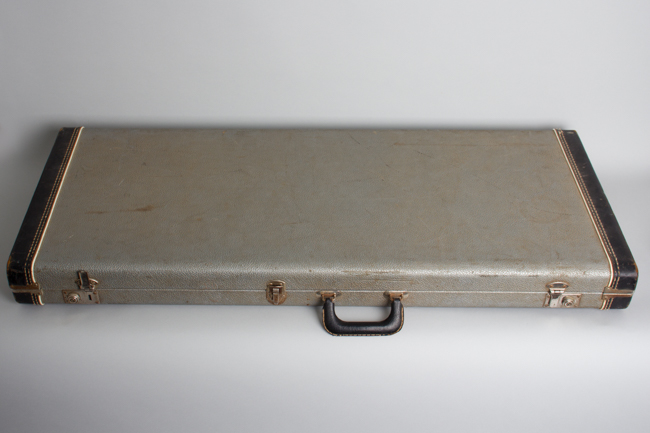 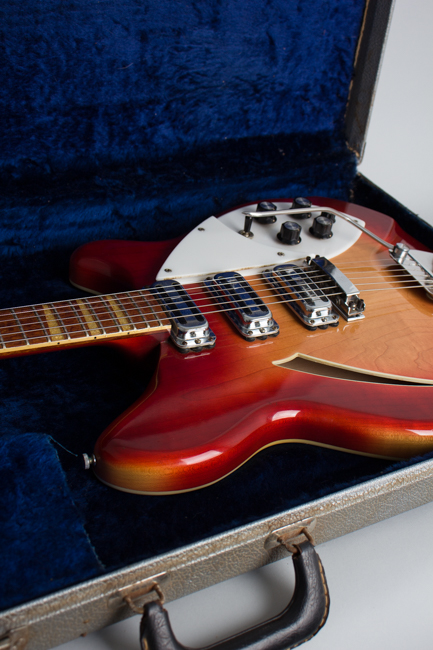 One of the most instantly recognizable of all classic 1960s guitars, the Rickenbacker "300" series of thin hollow-bodies has returned to favor again and again as new generations discover their bright, well-defined "jangle" tone and utterly distinctive look and feel. Virtually an icon of the 1960s, these sleek California hot rods have been the mainstay of Rickenbacker's line from the late 1950s to the present, some of the most popular professional guitars of the period. They remain one of the sharpest-looking and most distinctive-sounding of all vintage designs.

This is a nicely original guitar, with some wear but no alterations. It was the line's high-end model, a "Fireglo" round-edge (post-1964) Model 375 from Rickenbacker's peak year of 1966. The serial number dates it to September that year, with pots from the 33rd week. The Model 375 designation refers to the "Deluxe" features combined with three pickups and vibrato; the 370 is identical with no vibrato, while the 360 and 365 have the more conventional two pickups.

What Rickenbacker termed "Deluxe" features are based around the carved maple round-topped, checkerboard-back bound body with a single stylized sound hole. The "Standard" models 330-345 are flat-topped with no binding. The laminated maple/walnut neck has a bound, lacquered padauk fingerboard ornamented with crushed pearl "slash" inlay. This guitar is finished in Rickenbacker's vibrant red "Fireglo" sunburst with a white plastic double-layer pickguard, the classic period livery. The headstock is fitted with Kluson Deluxe tuners and the trademark white Rickenbacker logo headplate.

The three "toaster top" pickups are mated to a 5-knob, one switch wiring rig. Rickenbacker's three-pickup circuit layout is in its own way less quirky than Gibson's, if no more sonically versatile. The middle pickup is not available on its own; the selector settings are neck & middle, all three, or bridge by itself. The guitar is also wired with the "Rick-O-Sound" stereo output that almost nobody has ever used. Fortunately a convenient mono jack is provided as well...something Gibson missed! The "Accent" vibrato unit is simple but effective, using a bent piece of metal as the spring and a somewhat dangerous-looking sharp-tipped wire arm many players have removed or at least swung backwards.

The Models 335 and 345 are firmly associated with the early Who; the group's first records are a showpiece for the unique Rickenbacker sound. Despite sometimes being dismissed with a "1960s cliche" tag, the Rickenbacker 300s are more versatile guitar than many realize, a great-sounding and very classy instrument for both retro and modern sounds! The triple pickup 375 is much rarer than the twin pickup 360-365 and rarely turns up today. It definitely has the coolest look, if not really appreciably different sonics than the twin-pickup models. Still, we think all Rickenbackers should have three pickups -- it just looks so much more wicked!

This is nicely original Rickenbacker, showing some noticeable (mostly isolated) wear but in very good playing condition. The original Fireglo finish still retains a vibrant deep red hue with minimal fade. Overall it shows scuffing, dings and dents and typical belt buckle wear into but not through the finish on the back. There are no large areas of finish loss on the body.

The back of the neck has some heavier wear, probably from capo use. There are smoothed-out shallow gouges into the wood in the area if the second-fifth frets, feelable but worn down smooth enough to not be distracting when playing. Farther up the neck are just small dings and dents. The area of the lower end of the neck (especially on the bass side) shows signs of an old light overspray where a typical fingerboard separation (the usual result of uninformed truss rod manipulation) has been cleanly sealed up. This is not very conspicuous.

The hardware is nearly all original including the often-lost bridge cover. Only the term arm and retaining bolt look like very accurate reproes. Some of the plating shows some worn spots, especially the pickup covers but nothing too serious. Internally the wiring rig appears untouched. The fingerboard lacquer shows some wear to the wood, the frets have been crowned down a bit and have some minor subsequent wear. The neck angle is very good, with plenty of room to go either way on the bridge so playability is better than many.

This is one of the very few period Rickenbacker 375s we have had; they are MUCH rarer than the regular 365. Although it shows signs of serious use long ago it remains a stunner in the deep-red Fireglow livery, still resting in the original silver HSC. Overall Excellent - Condition.
×