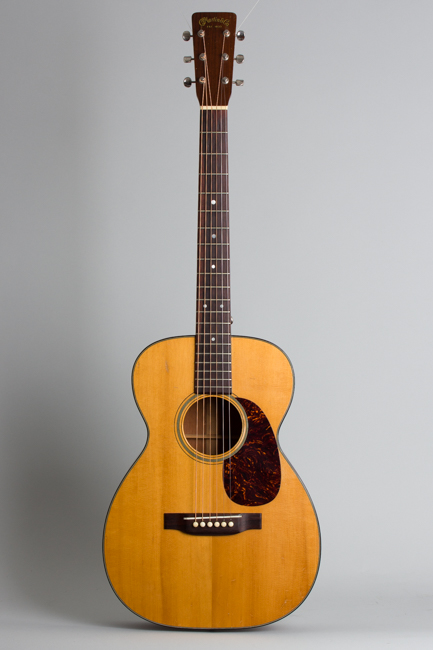 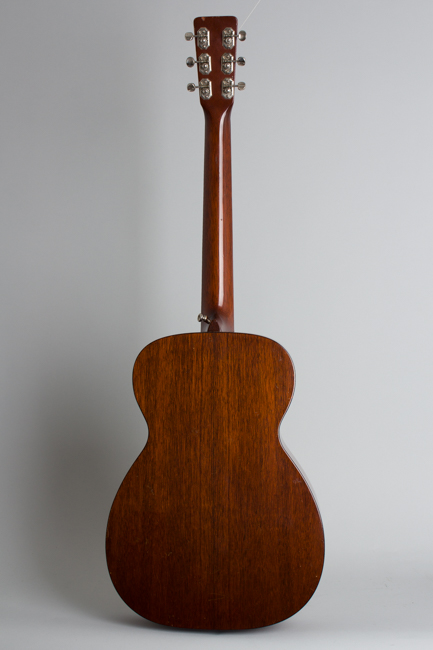 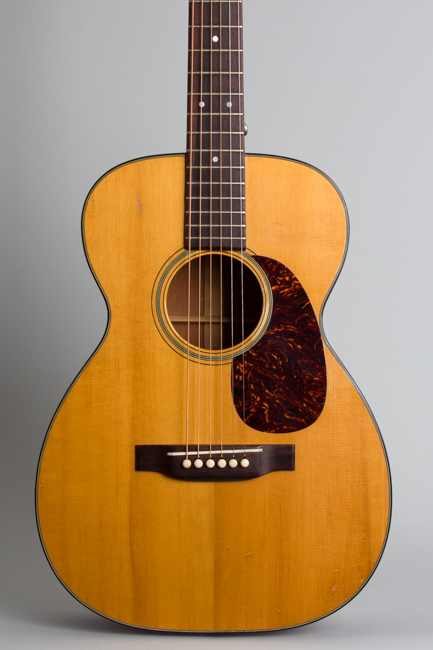 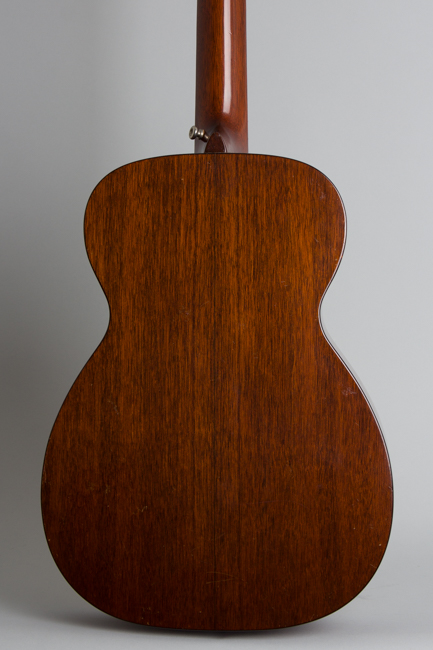 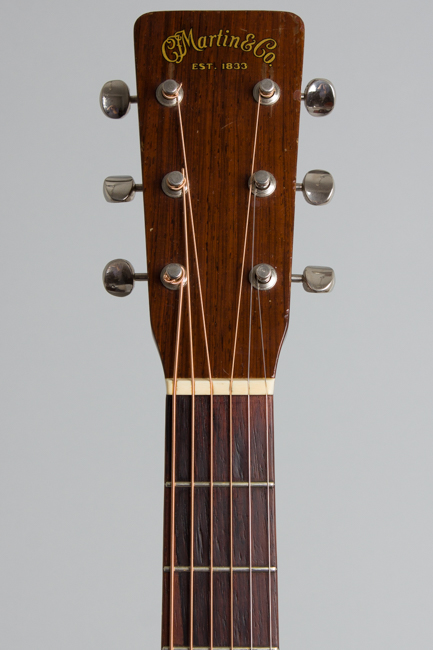 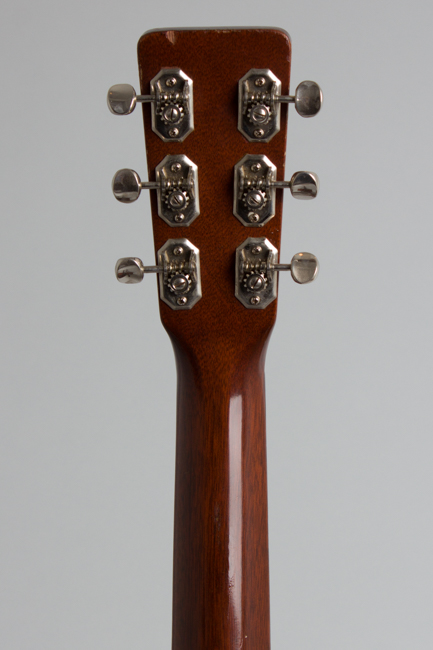 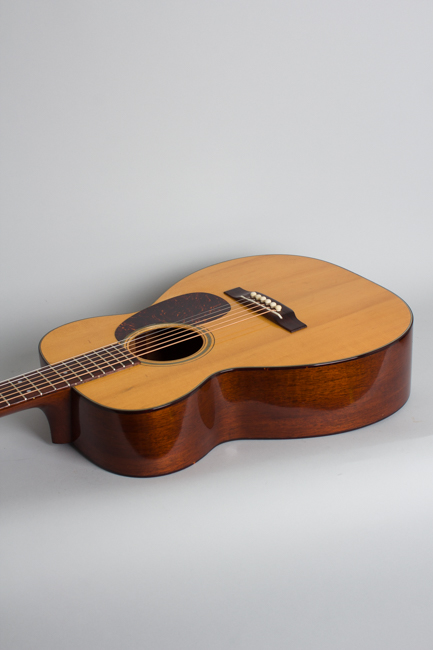 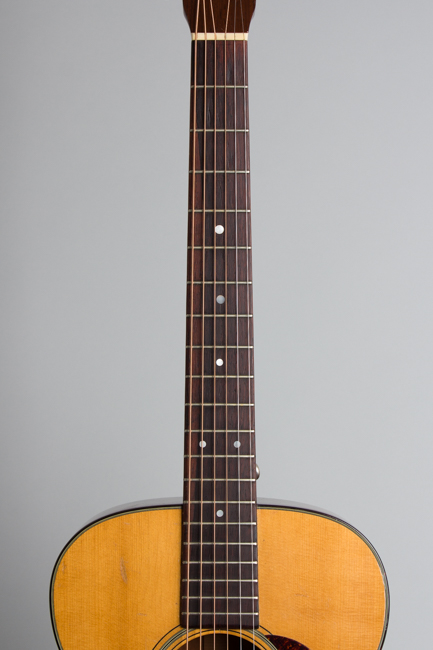 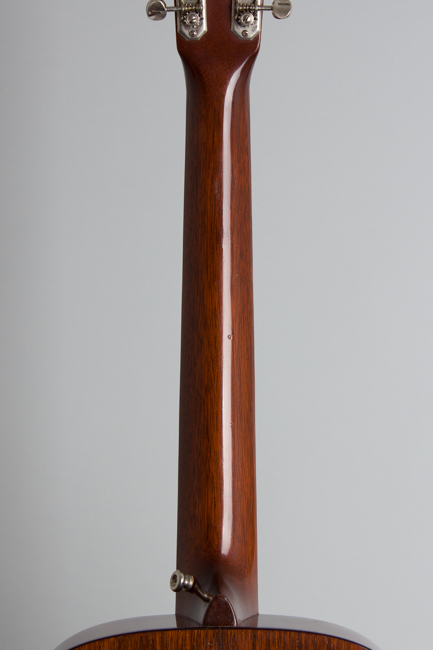 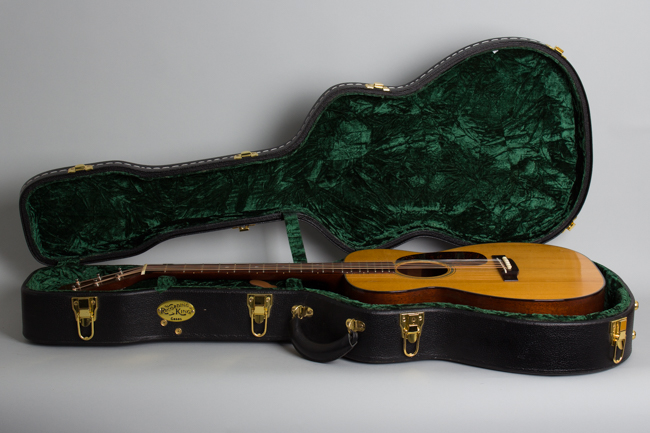 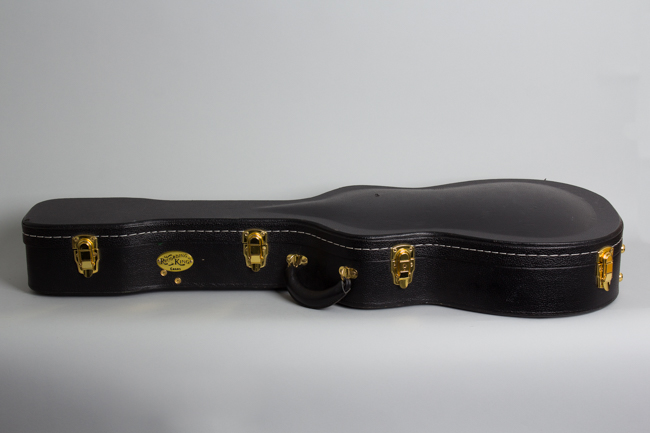 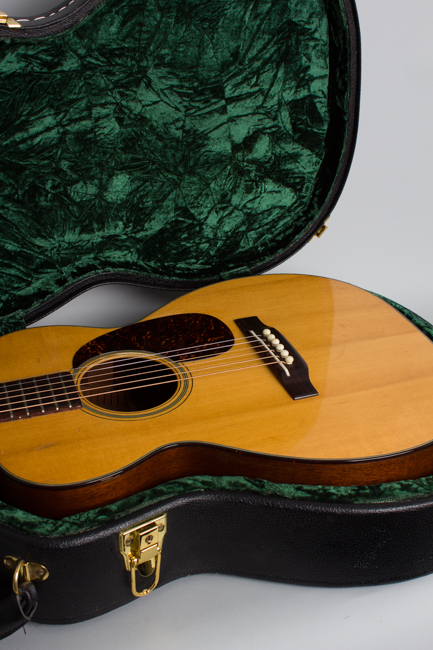 This is charming Martin 0-18 was built in mid/late 1953, one of 650 of these little 13 9/16" marvels shipped out of Nazareth that year. The mahogany body carries the typical period features including tortoise celluloid binding on the edges, tortoise celluloid pickguard and long-saddle Brazilian rosewood bridge. The spruce top has some fairly prominent long grain striping for a period Martin, enhanced by the nicely ambered thin nitrocellulose lacquer finish. The headstock corners are the somewhat rounded style typical of the period, with the peghead face adorned with the "CF Martin" gold decal on the face and individual openback Kluson tuners with large baseplates.

This guitar, like all made prior to 1964, is the product of the "old" red brick Martin factory, before the move to the modern facility down the road that year resulted in many changes in the way the guitars were made. These early 1950s 0-18s are lovely-sounding instruments, more lightly built compared to examples from a decade or so later. Originally priced at $80 (Plus case) the 0-18 was inexpensive for a Martin but hardly a cheap guitar by the standards of the day. This one has plenty of volume (more than many expect in a smaller body guitar) and a nicely even ringing tone. This is a superb-playing and sounding small-body Martin, showing wear and repair and minor repair but still in excellent playing order for all the just under seven decades since it first left Nazareth PA.

Though this guitar has seen some use and had a few repairs over the years, it has remained largely original over the last nearly 70 years. The original thin lacquer finish is generally well preserved; there are dings, nicks and scratches over the body, but almost no wear on the neck beyond a small dink at the 5th fret area. There is a small amount of strum wear on the top, with a section down to the wood along the lower soundhole rim as well as outside of the pickguard near the waist. The area of the top above the fingerboard extension has one noticeable deep ding.

A correct style but newer, slightly larger pickguard was installed some time ago, with older crack repairs from previous pickguard shrinkage neatly cleated underneath. There are also two neat parallel cleats along the upper side of the guitar above the waist, sealing two tight grain cracks there. The neck has been very cleanly reset and a fairly prominent strap button added to the heel.

The fingerboard and frets have very minor divots between the first and third fret, but show no wear after the fourth fret. It may have had a refret at some point, though it is very comparable to the fret wire that was used by Martin at this time. The fingerboard shows only light wear and the bone nut remains untouched. A newer saddle has been installed on the original bridge, and the original small maple bridge plate is still intact. This 0-18 has a sweet, lovely tone, with great playability up and down the neck and is housed in a modern tolex hardshell case. Overall Very Good + Condition.
×