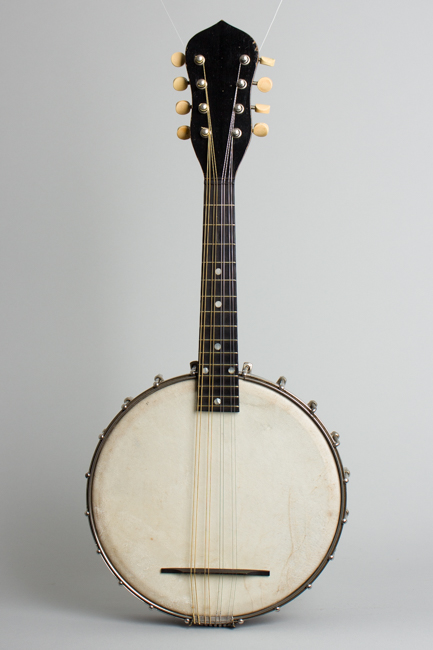 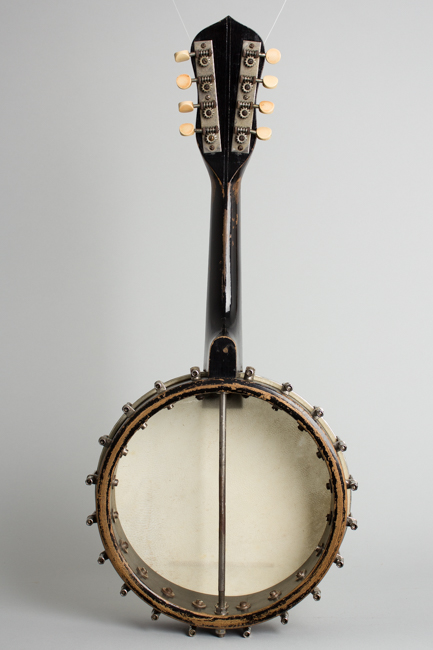 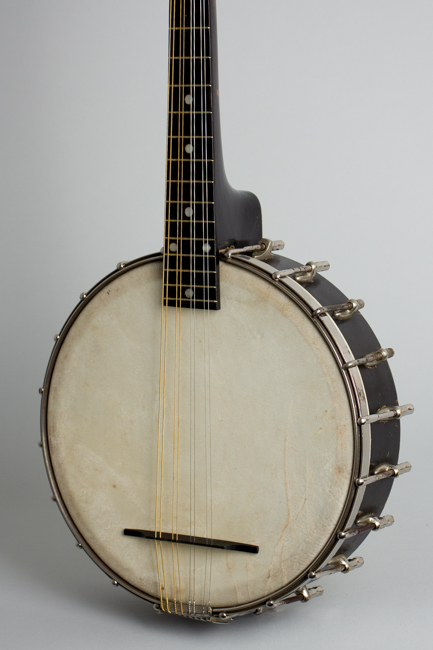 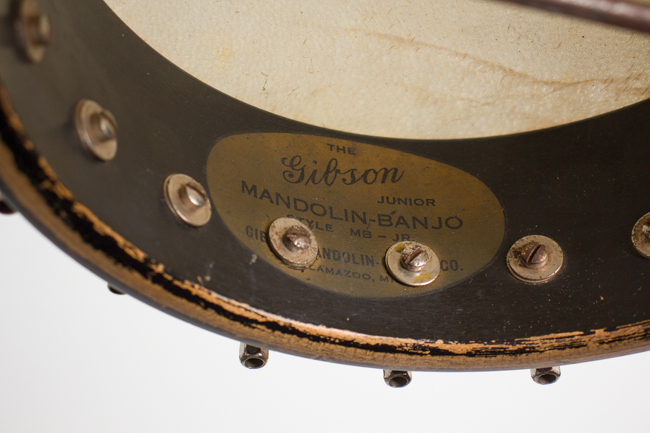 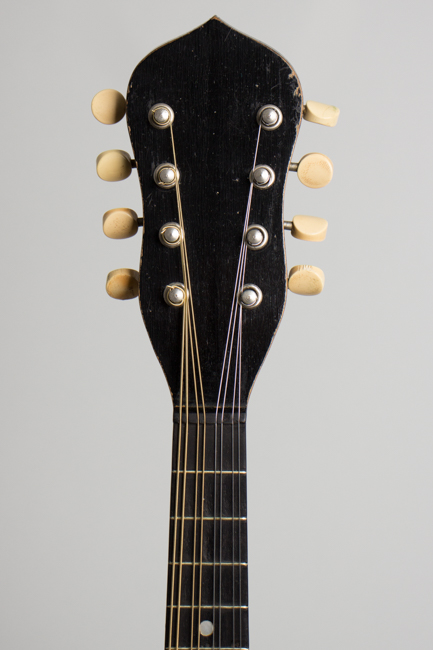 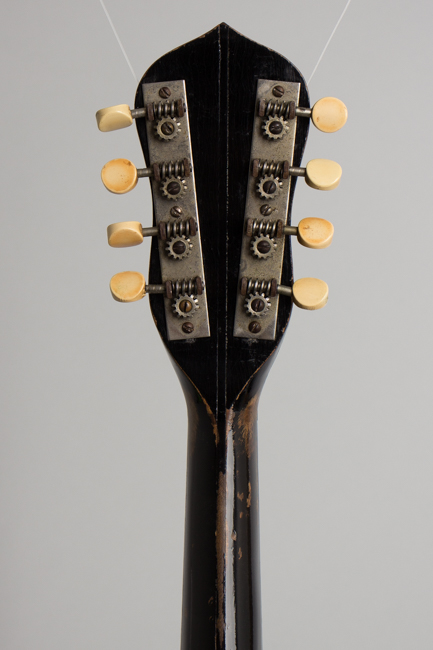 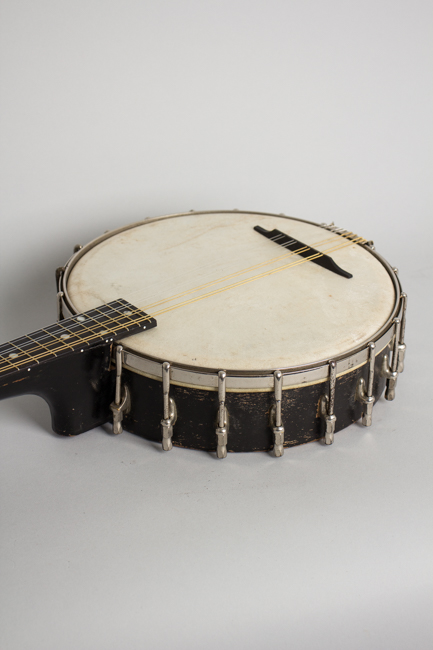 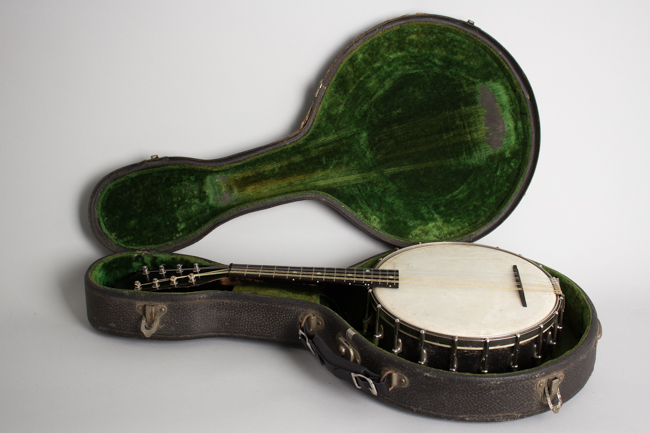 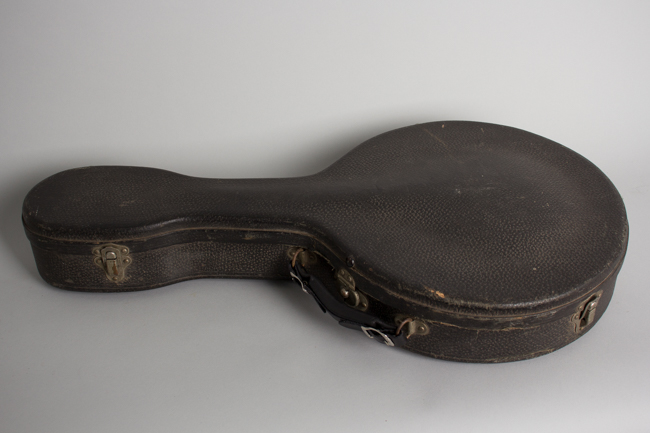 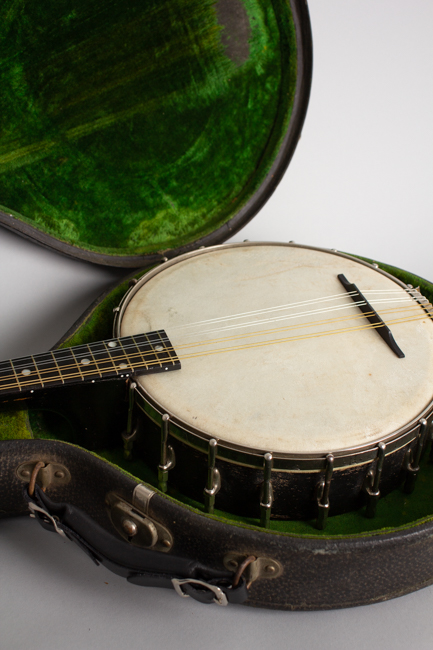 This raucous little twanger is an early 1925 Gibson Mastertone-era MB-Junior mandolin banjo, one of the least expensive instruments Gibson offered. This is a transitional instrument between the earlier "trapdoor" banjos and the later "Mastertone" models, though this very simple creation has few of the feature of either! Indeed this ebony-finished model is about as simple as Gibson got, but really with a mandolin banjo it dies not seem to make a lot of difference, they sound about the same at either end of the scale.

The MB-Junior is very plain in appearance but still has some "Gibson" specific features. It is finished in black overall, with no logo but a special "Gibson Junior" label inside the rim. There is no tone ring, the head rests directly on the wooden rim. It does sport the patented single coordinator rod to adjust neck angle, a very handy feature unique to Gibson at the time and still working perfectly. The rim is plain with a traditional hook/nut/shoe construction not the bearing tube used on most Gibsons. The headstock has an odd slightly bulbous profile Gibson used only around this time on lower end banjos. The laminated maple neck has a genuine ebony fingerboard, a luxury soon deleted from bottom-line Gibsons.

The fairly thin laminated maple rim is just over 9" in diameter so this is a handy little player, less brash than some 8-strings probably due to the lower metal content in the rim! It is worn but a good player particularly suitable for jug band styles or early blues styles and a neat double for the mandolinist-just as Gibson intended.

This little Man-Jo is rather well worn overall but fully solid and substantially original. There is finish wear all over, most notably to the bottom of the rim. There are no visible repairs or alterations, the hardware is mostly original with two replaced but period hooks and the tailpiece cover missing (as usual!). It is fitted with an old skin head and a period wooden bridge that looks like it came off an old wood-top mandolin that works well. There is some wear to the lower frets but nothing excessive. This funky old twanger plays very well with plenty of volume and punch despite its budget origins. It includes a worn but functional green-lined Gibson OHSC, from the correct 1920s period but intended for the larger 10" rim. Very Good + Condition.
×