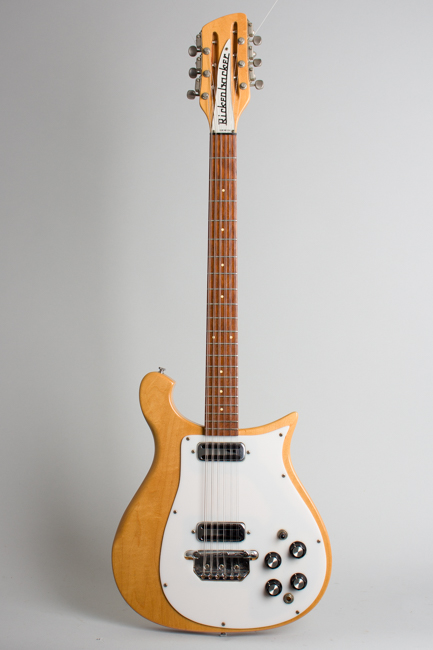 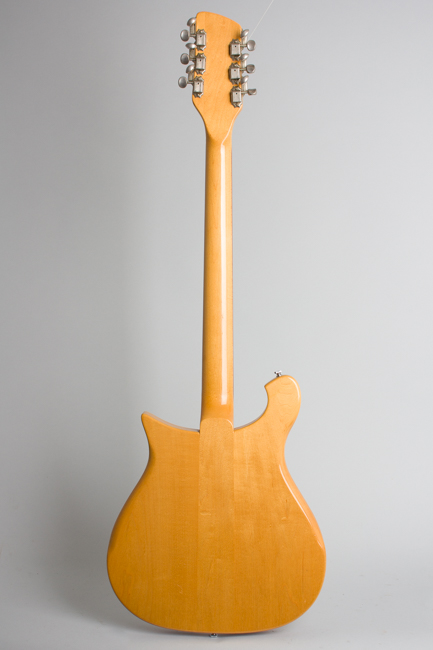 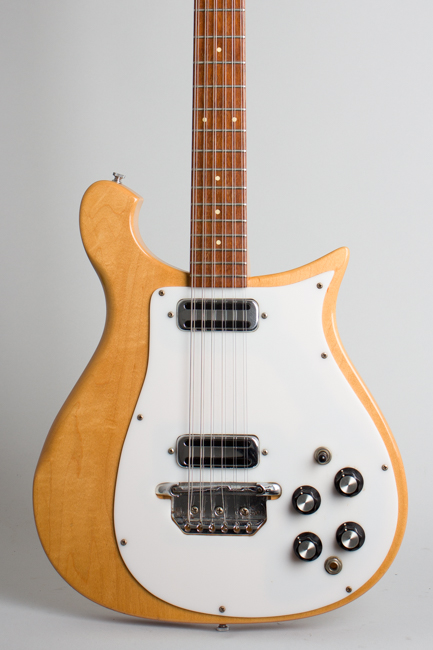 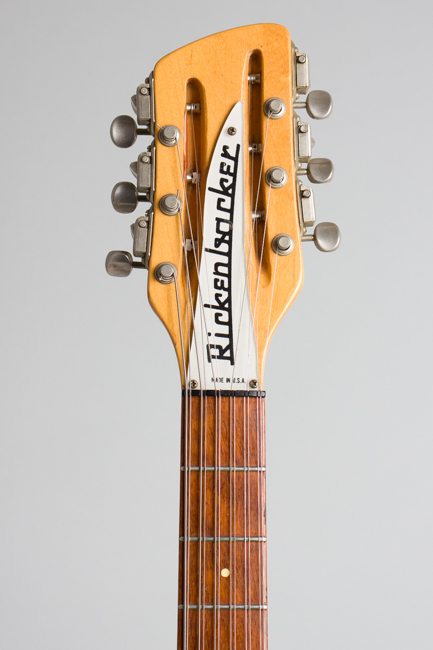 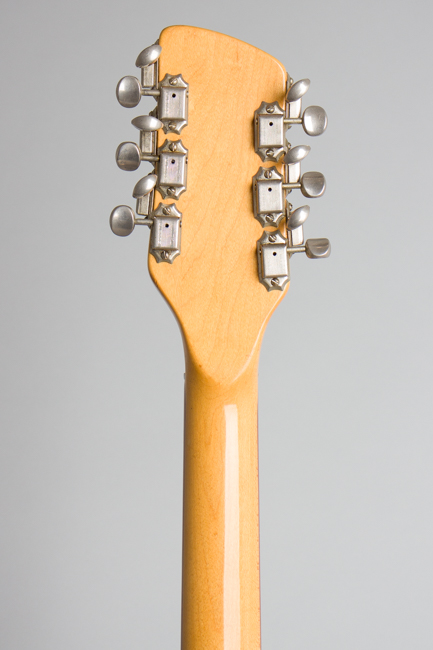 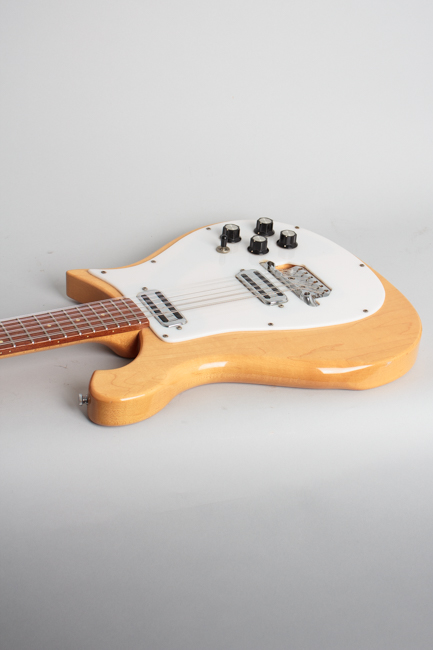 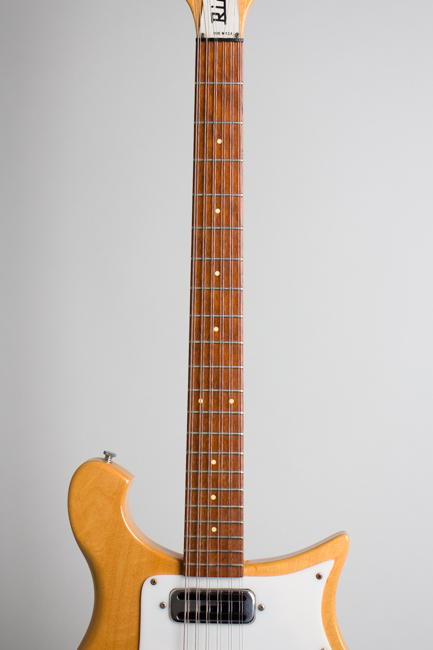 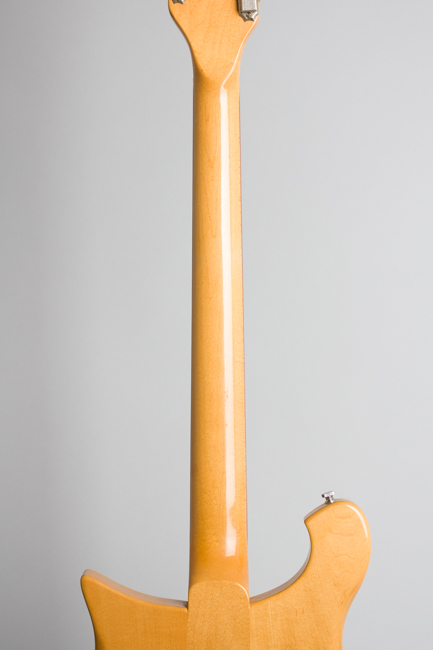 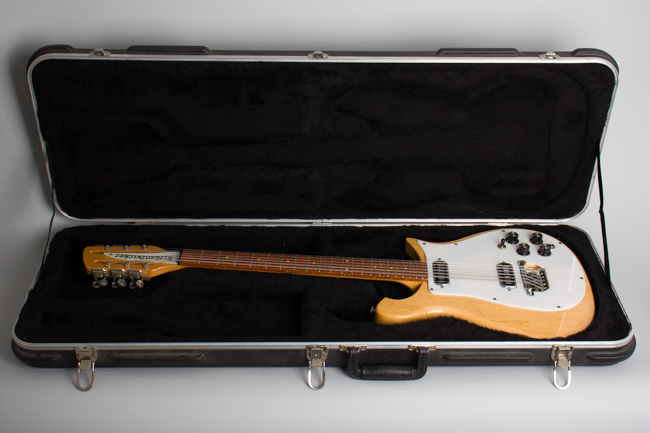 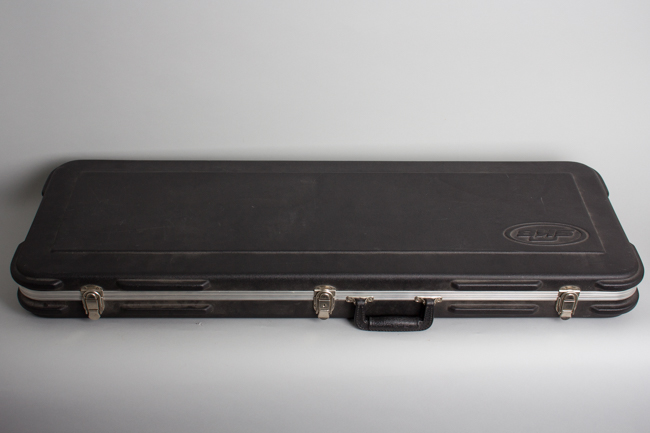 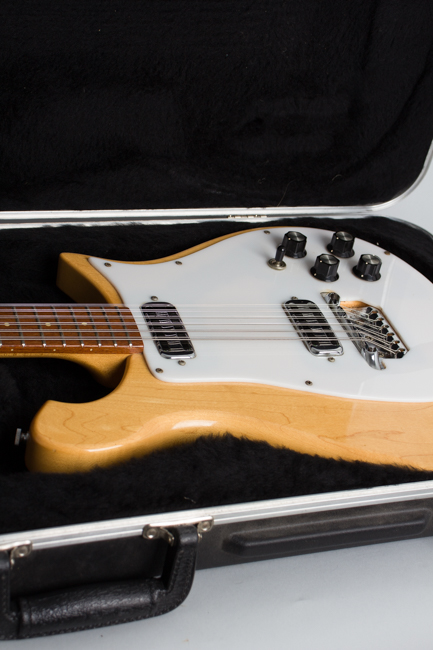 This beautiful Mapleglo Model 450/2 is a somewhat unusual example of one of the Rickenbacker company's popular 1960s period solid-bodies, finished and sold in the early 1970s when interest in these instruments was at a low ebb. The serial number on this guitar dates to November 1973, a time when Rickenbacker was almost exclusively producing the 4000 and 4001 basses, which were in very high demand at the time. The company's signature 12-strings, especially this solidbody model, were pretty much forgotten at the time.

The 450 is the most basic Rickenbacker 12-string, using the standard layout of the "cresting wave" solid-body series mated with the company's ingenious 12-string headstock. The finish is just a bit heavier than it would have been in 1965, but otherwise this guitar is practically identical to its 1960s siblings. It even still mounts two 1960s "toaster top" pickups in its white pickguard, which were definitely classed as new/old stock at the time and probably being used up on this lower-end model. Other features include a plain dot fingerboard inlay, single piece bridge saddle and the basic 4-knob, 1 switch circuitry.

While not as iconic to the "British invasion" era as the company's semi-hollow 330/12 and 360/12 models, the solid-body 450/12 is a great-sounding and super sharp-looking guitar, with an utterly distinctive character. The sound is a bit brighter, and the guitar is a very compact, easy handling instrument. This is a neat out-of-time example, a better playing guitar than many of its older siblings.

This is a very clean guitar, all original and not showing too much play time since new. We don't know who ordered this in 1973, but it does not appear they got a lot of use out if it! The guitar shows no repairs or alterations, only some very light wear. There are a few small dings to the headstock and body but that's about it. The only really notable marks are some scrapes on the bridgeplate where it looks like someone just started scratching away at the serial number, perhaps in an abandoned effort to pass it off as a 1960s guitar!

The guitar appears original down to the last screw. The Mapleglo natural finish has ambered just a bit, adding that nice "vintage-y' glow. The original frets show hardly any wear, and the neck angle is excellent, often not the case with these. This 12 string plays and sounds exactly as it should, and actually intonates quite well, often a sore spot on older 450/12 models. A truly stellar example of this handy little Rick, a 1960's guitar born out of time in the 1970s. Includes a later SKB molded plastic hard case in very solid condition. Excellent + Condition.
×