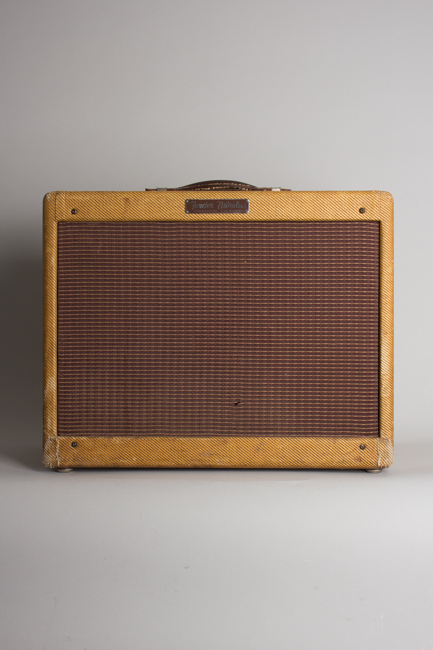 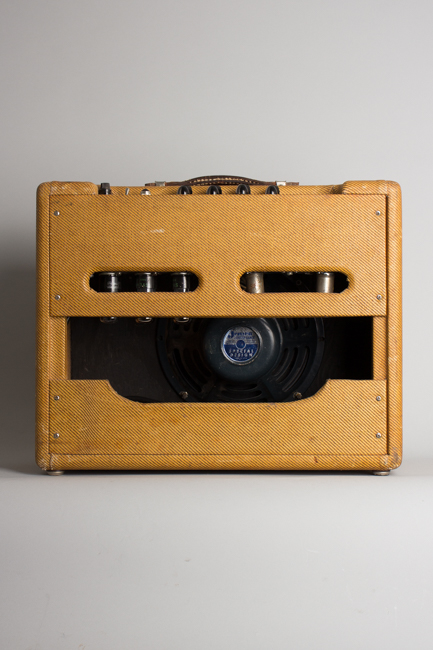 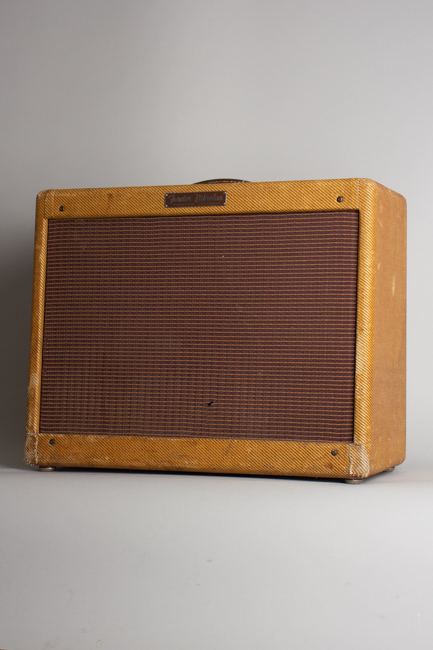 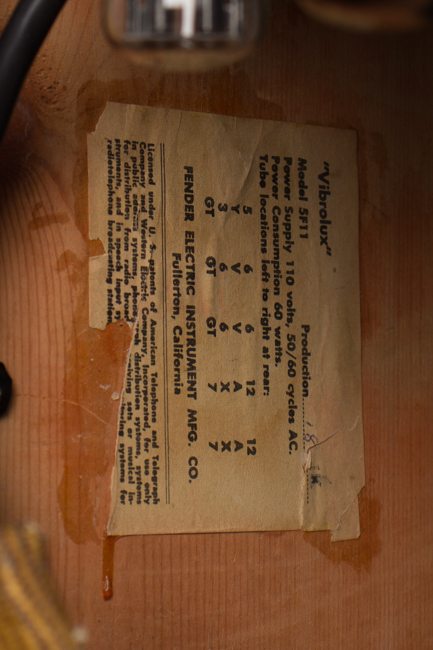 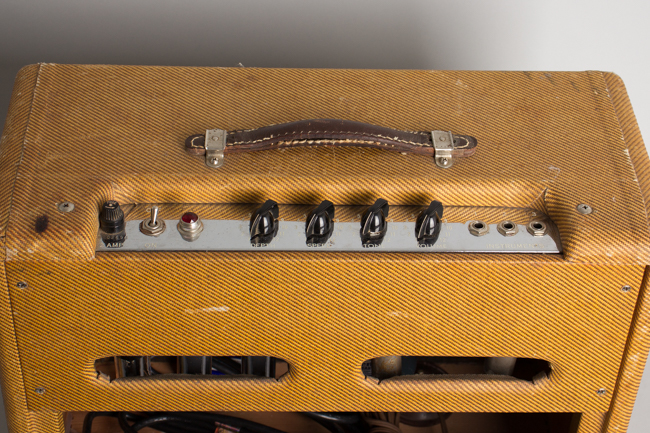 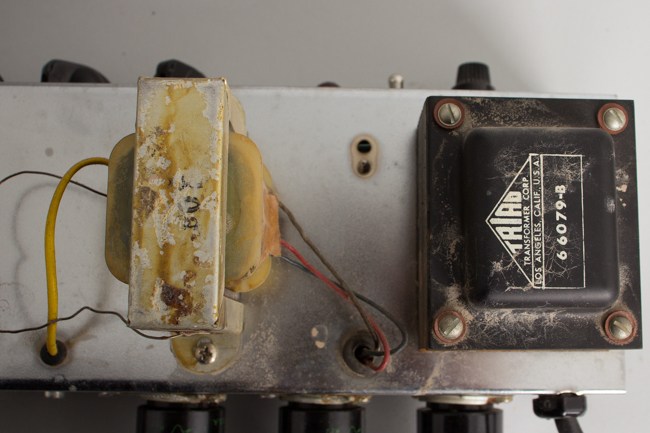 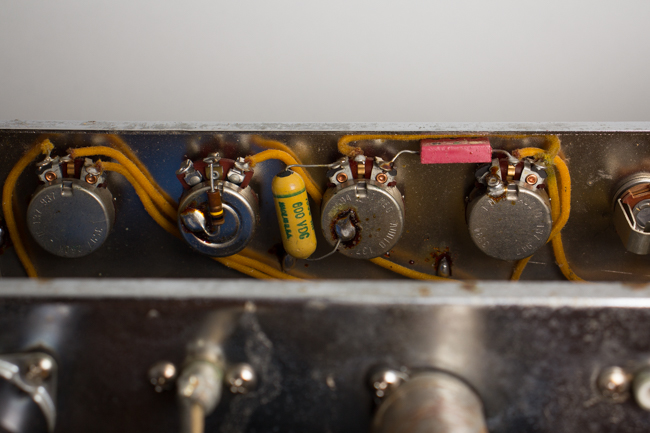 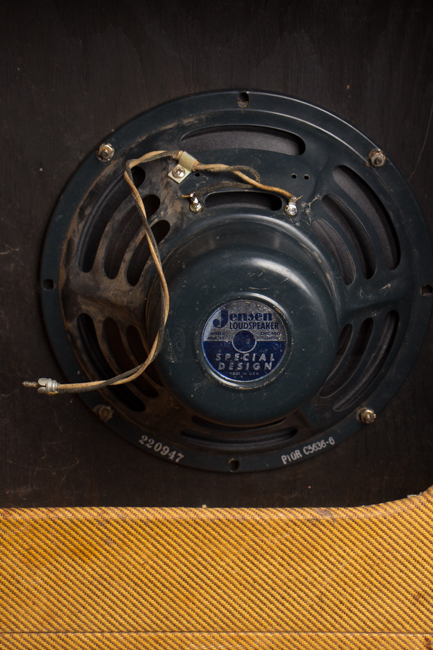 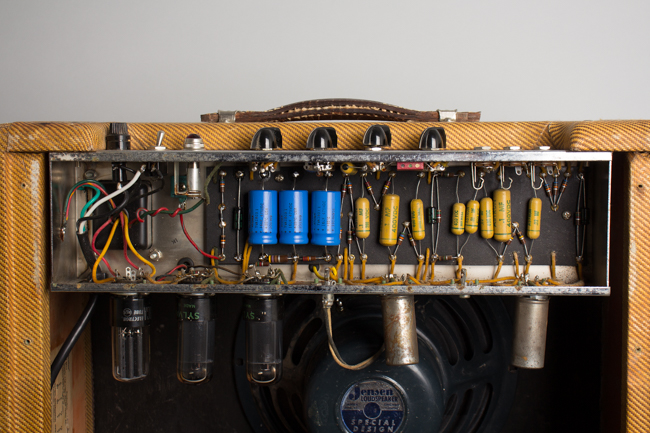 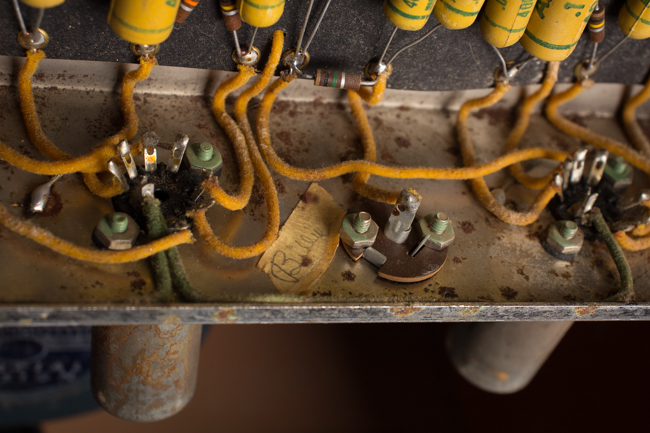 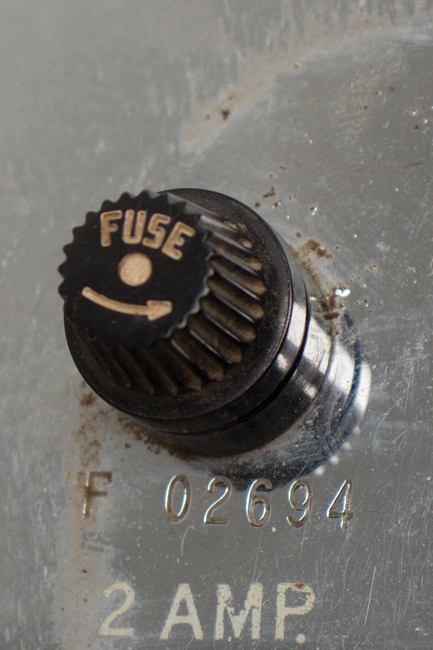 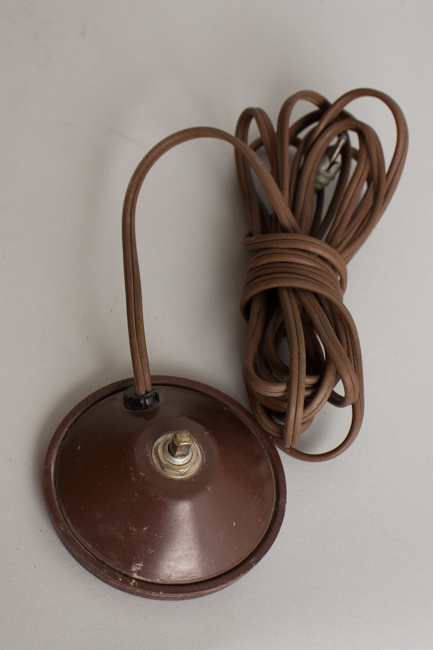 The 1950s tweed Fender Vibrolux marks a special debut in Fender history: the built in tremolo effect, introduced with this model along with the larger Tremolux. This one has a tube chart stamp reading IK, indicating it was assembled in November, 1959. Not to be confused with the later Tolex-clad 60's era descendant, the tweed Vibrolux 5F11 is a relatively compact combo amp with one 10" Jensen speaker and a dual-6V6 power section putting out around 10 watts of power. The circuit is basically the same as its little brother, the 5F10 Harvard, with a tremolo feature added; on introduction in 1956 this was smallest Fender amp with built-in tremolo. Unlike the 6AT6/6AV6 first stage found in the Harvard, the Vibrolux uses the dual-triode 12AX7, with the added half powering the tremolo. The rest of the circuit is virtually identical.

Also like the Harvard (and unlike many other contemporary Tweed models like the Deluxe) the Vibrolux is a fixed-bias amp, allowing it to have surprisingly high headroom and output volume for a dual 6V6 layout. This original Vibrolux was on the edge of the student/professional grade amp dividing line in the 1950s but offers plenty of volume for most small gigging and recording situations today, with a tone that's hard to beat.

This Vibrolux is a very nicely preserved original example. Externally, the rather fragile tweed covering shows only fairly minor signs of wear, mostly along the corners. The faceplate is impeccably clean with virtually no loss to the screen printed graphics and no sign of corrosion. The original leather handle appears to still be present; it has seen some wear but still has life left in it! The amp also comes with what appears to be the original footswitch; it is the later brown metal and plastic-type, seen throughout the "Brown-era", not the mid-50s wooden switch.

Electrically, the amp is nicely original. The original 10" Jensen P10R speaker has a stamped code 220-947, dating it to the 47th week of 1959. Both the power and output transformers are the original Triads, marked 66079-B and #108. The visible pot codes fall between the 37th and 47th week of 1959. The amp chassis was lovingly wired up by Billie and bears her signature on a piece of masking tape. The amp has received our routine maintenance, including replacement of all electrolytics, cleaning of all sockets, pots and jacks, a 3-prong power cord and biased to spec.

This is a great-sounding combo, newly re-invigorated with a real singing crunch to the tone when pushed. Another fine example of one of our favorite 1950s amps, ready to gig and/or sing in the studio. Excellent Condition.
×